The armies are those from the POTE campaign battle recycled again so Cameron could see how our rules worked on the same armies as he used before using Ironbow.

Cameron held back his centre, redeployed his light cav as skirmishers to meet the crusader right and advanced his right in a hook hoping to hit a crusader advance on his centre in flank. This was a mistake because the manoeuvre itself exposed its own flank. But hot dice can make up for mistakes - his second line used initiative to face the flank threats and his front line charged straight through the crusader’s mercenary heavy cav. The second line was beaten, but the first line eventually rallied and came back in good nick with decisive results.

The skirmishing cavalry destroyed the heavy cav on the crusader right with bowfire before it got around into the rear of the spearmen.

The centre was a mixed bag, but the spearmen held their own and in the end the returning Turkish heavy cav finished the job.

Cameron was a bit disconcerted by the amount of dice rolling to do with getting his troops to do what he wanted. But it was a battle with an unusual amount of new orders, initiative and morale testing
Posted by Nick at Monday, July 21, 2003


We have doubled the numbers, using command groups of 2 units for each POTE unit.

We deployed our way with map deployment, then orders issued after seeing the enemy dispositions.

Jim put is Crusaders in the centre in 2 lines, Pisoi in the woods on their left, Bows & LC on the right, LC + HC on the left.

Both sides held their centres back and sparred on the edges.

On his right Oshin attacked with HC, LC & Sp. In response Tancred sent LC forward as skirmishers and sent 1 Crusader CG to the left to help, counterattacking with them & HC. The Crusaders beat the HC, Tancreds HC beat the LC, but was in turn beaten by the Spearmen.

In his centre Steve sent forward LC as skirmishers. Jim countered with his LC. Oshin’s LC was better and destroyed Tancred’s.

The pic is taken about now - Oshin on the right, Tancred on the left.

Tancred’s bows finally got activated and swept the LC away, but not before they got in some casualties on the Crusaders.

The victorious spearmen rallied, then began sweeping towards Tancred’s rear surrounded by a cloud of LC skirmishers. The Pisoi were turned around to meet them. It was hoped that with the support of the skirmishers, they might win, but the horse bows were singularly ineffective and didn’t do enough damage to fair up the fight, and they were soon defeated, routing back towards Oshins HC they had to surrender to the Spearmen.

Meanwhile Oshin had sent 1 Cg of HC from his centre to the right. This attacked the victorious Crusaders in flank as they charged on in uncontrolled pursuit racking up another cheap AMP.

In the centre Oshin’s other Spear unit had come down off the hill and marched towards the Crusader’s right as the main HC force followed up. The Spears were met with the bowmen - coming back from disposing of the HC the bowmen didn’t get a chance to use their bows and were disadvantaged in the fight. The first of Oshin’s HC charged the Crusaders weakened by the horse archers. This made it a fair fight, but the dice favoured Oshin.

Tancred tried to lead a crusader CG around the enemy’s left, but the Spearmen rallied immediately after beating the bowmen and were ready for them.

The two second lines of cavalry charged each other as the 1st lines disappeared towards Tancred’s rear (Crusaders in rout, Armenians in hot pursuit). This time the Crusaders maintained their advantage and won, but it was too little too late. Oshins HC from his far right finally got back into the action riding down the Crusaders weaken by the Spearmen.

Not as decisive as Monday, but close. Counting command groups = POTE units:

Tancred had 2 ½ EHC, ½ HC, 1 bows rout, 1 Ps captured, 1 LC dispersed. The rest of the army was scattered in uncontrolled pursuits.

On our points system the two armies were dead equal (I made Tandred’s Moslems D class to achieve this). I can’t say I can blame luck, I failed to capitalise on my strength - the EHC, and Steve turned it into a battle of manoeuvre and outmanoeuvred me.

We got through ours quicker with twice the troops, but then we did know what we were doing. Both battles were entertaining, but obviously it’s more enjoyable to know what you’re doing rather than have to scratch through the rule book all the time.

I’ve been unhappy with our army morale test for a long time - the Ironbow army morale track is an interesting idea that’s got me thinking. I liked the alternate deployment start in Ironbow – I think we should do that ourselves sometimes. The small number of units allowed more space for manoeuvre, maybe we have gotten into the habit of having units & armies too big.

The greatest advantage of our rules though is their simplicity and adaptability – they allow us to play a wide range of periods with minimum strain on our aging brains.


Which night is best ?

With Glen & Leigh interstate, numbers are bit thin at the moment. Is there a better night than Wednesday ? Cameron seemed to enjoy himself and would be a welcome addition, but can’t come on Wednesdays.

What about Monday, or Tuesday, or Thursday, or whatever ?

Please let me know which nights you think you can make and can’t make & I’ll tote up the votes and see if there is better option than Wednesday.

Meanwhile, business as usual next Wednesday.
Posted by Nick at Wednesday, June 25, 2003 No comments: 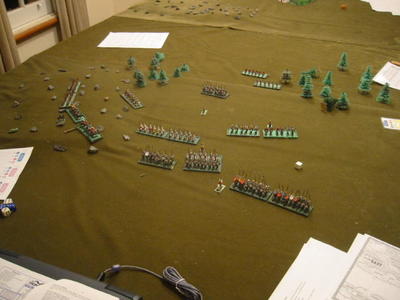 
Oshin deployed his Spears and LC on a steep hill on the RHS of the battlefield with his HC behind it.

Tancred had 2 Crusaders hidden in a wood in front and left of Oshin’s hill, the rest in the centre.

Tancred moved to his left towards Oshin’s army. The hidden Crusaders came out of hiding but came under fire from LC on the hill – half of them were distracted by this and charged up the hill at the LC. The rest joined the main body attacking Oshin’s HC, which had by now moved out to the right around the hill into the open. See pic.

Oshin charged at the LC on Tancred’s left. They tried to evade, but the unit with Tancred attached was caught up with and half destroyed. A quick reference to the website confirmed Cameron’s memory of an errata which lead to Tancred being captured. Tancred’s infantry was also swept up in the pursuit.

A hail of arrows from the hill precipitated a flurry of 1’s from Bernard doing reaction checks and a Crusader + the HC suddenly routed in the centre.

Now two HC were slugging it out with 2 Crusaders on Oshin’s right flank while the other Crusader continued slogging up the hill towards the LC – to be met with a counterattack with Spearmen & LC. Cameron’s counterattack was blessed with 6’s and the Crusaders on the hill was surrounded and surrendered.

The consequent disaster check on the remaining Crusaders resulted in more 1’s and they joined the general rout.

Bernard’s mistake was the typical Crusader syndrome of rushing at the enemy’s main body with the knights without due regard to the scum (compounded by Cameron’s consistently better dice).

The horse archers on the hill were effective in firing onto the flank of the Crusaders and later joined with the spearmen to swamp the unit that tried to get at them.

The decisive moment was Oshin’s charge with 2 HC v. Tancred’s LC. The LC tried to evade, but Cameron’s hot dice caught them, including Tancred himself. The problem got worse because the infantry were behind the LC and got swept up in the chaos.

The Crusader cavalry should still have beaten some of Oshin’s HC, but Oshin’s dice kept him in it until Bernard’s penchant for throwing 1’s for morale checks completed the disintegration of the army.

The rules themselves were a bit difficult because we were all unfamiliar with them. They are not that well set out – what you want to know isn’t always where you look. We find it odd that there is no wearing down effect of long combats – if you survive a test you are as good as new. We also found the turn sequence confusing at times – like when did the movement resultant from a test take place – this turn or next ? But it was an entertaining battle - certainly decisive.

I thought we should try doing this battle using our rules on Wednesday. The difference could be instructive.
Posted by Nick at Monday, June 23, 2003 No comments:

A practice battle for the Princes in the East campaign. Jim v. Bernard. I am hosting an international bout between two of the protagonists next week. Bernard is the ally of one of the sides so will be their general. Cameron Harris is the other, I’m to be deputy God.

After some blind groping about in the Ironbow rules book my army seemed to fall apart, so I conceded – eager to get into my Spad with a novice target on offer.

The Ironbow rules have some interesting ideas, but most of those present weren’t too impressed.

A long fight characterised by a swirl of Huns going in tight circles with one Spad zapping in and out and the other ineffectually lurking about above looking for opportunities – but the Huns kept turning below him and the opportunities never came. Peter took a lot of damage, but well spread and the Spad took it with little effect. Chris did well for a novice – got in enough shots to use up all his ammo on the last turn and successfully evaded the vulture above, but almost all his hits were on his engine and he was unfortunate to go down in the last turn of the game in a final nose to nose gamble with Peter’s Spad.
Posted by Nick at Wednesday, June 18, 2003 No comments:


Once again the Swedes won. Peter confused Mark’s plan by deploying his pikes on a steep ridge under the mistaken impression that it was a gentle slope.


While that was going on the umpire amused himself by trying to build a Pfalz. The instructions in thinly disguised Russian were overcome but the wing struts have defeated me for the moment.
Posted by Nick at Wednesday, May 21, 2003 No comments: