The battle continued into its 2nd night of play.  The British continued to attack the dug in Sikhs with artillery & musket fire. The Sikhs returned fire.  Casualties mounted on both sides without decisive result.

Late in the afternoon, with artillery ammunition running low the Brits decided they couldn't risk an all-out attack & withdrew outside artillery range in good order.  TheSikhs had no appetite for a counterattack, so the battle petered out in a draw.
Posted by Jim Gandy at Wednesday, March 31, 2021 1 comment:

After two failed attempts to retake Ferozpore, the British have received reinforcements & came back for anther go.

The Sikhs have strengthened their defences & reduced the length of front by pulling their left back behind the wadi.

The Brits have formed up with their infantry & most of their artillery on their left & theri cavalry on their right.  This time it seems they intent to attack the Sikh's right. 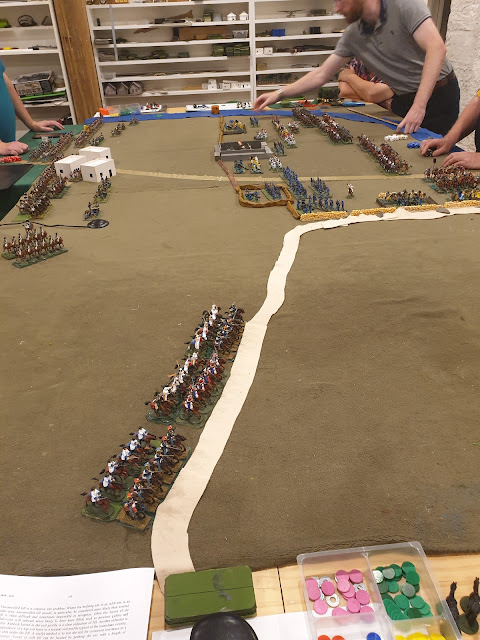 The battle commenced with the British deploying their batteries while some of their cavalry advanced on their right.  The Sikhs pulled back the infantry from the trench line out of artillery range resulting in an artillery duel.  In this the greater number of British guns countered the Sikh defences & some of the Sikh guns were put out of action.

Later in the morning the British infantry (mostly Sepoys) began their advance. The Sikh infantry returned to their front line to meet them.

On the other flank the British cavalry deployed to pin down the Sikh left so it couldn't reinforce their right.

Next to the river the British Sepoys got the worst of the musket exchange & have fallen back behind their artillery which had advanced behind them.  A Sepoy attack on the redoubt was beaten off but  British unit has now attacked it's weakened garrison.  An exchange of musketry is continuing on the rest of the infantry front.

We paused the battle until next week at 10pm.  That was after the 14th turn so 1pm battle time.  The Brits have so far taken only one short length of trench & the fight remains very much in the balance.
Posted by Jim Gandy at Tuesday, March 23, 2021 No comments:

Chris' Soviets, Mark's Italians & Jim's DAK made the trip to Devonport for their Operation Kamplinjer Bolt Action Event. The quality of the terrain on the 10 tables was as always at Devonport a feature as was the standard of modelling (though definitely not Camp Cromwell's best suit).  There were 3 rounds with matches as much as possible Axis v. Allies.  While the event was characterised by having a good time rather than winning, Team Cromwell had a successful day.  Our 9 games gave us 7 wins, 1 loss & 1 draw.  Mark won Best Minor Power general & Jim was 2nd Best Axis general.

The armies were 1250 pts with 2 platoons allowed, one of which could be armour, with entries scrutinised for excess cheese.  The result was some interesting challenges - like infantry forces with little anti-tank v. forces with several tanks (and it wasn't always the armour that won).

The venue in the Nixon St Primary School Gym.

Two examples of the 10 tables.

Many thanks to Acktar & co. for another excellent event. 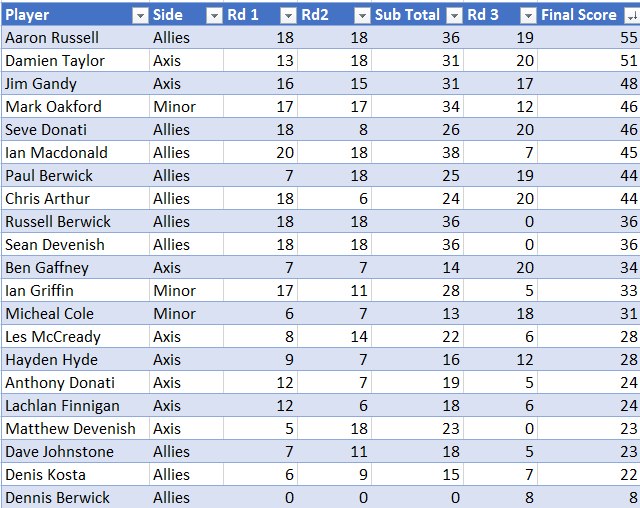 With a Bolt Action Tournament coming up this weekend we had a practice match to refresh us on the rules.  Double Envelopment scenario 1250 pts, Jim's Afrika Korps v. Chris Soviets.

The German battle plan was assisted by a couple of lucky breaks which lead to the Soviet force being totally destroyed at the cost of one German unit.  I'm hoping I didn't use up my ration of sixes.

We paused the battle at about noon last week & continued tonight.

The Brits continued their attack in the centre.
On the left the Sikh cavalry withdrew from the wadi line to avoid having the brigade broken by artillery fire.  On the right the Sikhs continued to try to motivate their cavalry to attack the British flank guard.

While the British attack in the centre is making some progress, they are also losing men themselves  but unlike the Sikhs, they cannot afford the losses.

The Sikh infantry brigade in the centre is broken, but with a mass of Sikh cavalry in reserve behind the gap, the Brits decide they have done enough & break off the action.

On the far flank, the Sikh cavalry have finally got into action & broken the Brit's irregular cavalry allies, but it is too late to make any difference.  The Sikhs only follow up as far as their original defence line., the Brits superiority in artillery dissuading them from wanting to pursue.

The Butcher's bill favours the British with 20 Sikh units broken to 13, but the bulk of the Sikh casulaties were irregular infantry, their best troops are still intact, & they they can afford the losses while the Brits can't.  The Brits have just 15 units left on the field to the Sikh's 36.

So the we go back to campaign mode & hope to have another battle to fight next week.

After the Sikh victory at Ferozepora last week, the Brits retreated while the Sikhs dug in.  A week later the Brits, having been reinforced, returned to Ferozepore & although still heavily outnumbered, & with few truly British troops, attacked.

The Sikhs have a line of weak entrenchments stretching from the river on their right to the wadi in the centre & a pair a of redans on the left of the wadi.  The front line is continuously manned with strong reserves behind.  The Brits begin with an advance of cavalry & infantry on their right, artillery batteries bombarding the centre & native cavalry held back on their left.

The British artillery gain an initial advantage with hot shooting knocking out some of the Sikh guns.  The Sikhs move up reserve artillery in the centre. On the near flank the British cavalry have crossed the wadi.   Crossing the wadi has slowed theri advance giving the Sikhs time to reinforce their left flnak cavalry.

The British cavalry, cursed with indifferent dice, failed to break thru & the front line has broken off.The artillery duel continues in the centre.

Having failed to break thru in their initial charge, the outnumbered British cavalry are withdrawing to avoid defeat by attrition.  The Brit infantry is now advancing in the centre.

The Sikh cavalry have followed up the British withdrawal which is inhibited by the wadi here the Brits are forced to fight a rearguard action. The British infantry attack (mainly Sepoys) has had mixed results.  One redan has been cleared, but in the space to the left of the old British fort the attackers were broken.  One Sikh unit of fanatics has charged forward forcing limbered artillery behind the front line to flee.

The Sikh cavalry counterttack took out some of the British cavalry, but they also lost some in a successful counterattack of from truly British musketry firing down into the wadi.  The victorious Sikhs in he centre have been destroyed by artillery & musketry.  Attempts to make a counterattack by Sikh cavlry on the far flank are proceeding very slowly due to poor command.

This is the situation about noon when we decided to halt play for the night.  Battle to be continued next week.  Units broken at this stage:
Brits: 2 Sepoy Inf, 4 cavalry (1 each British, Elite, Sepoy, irregular).
Sikhs: 4 batteries, 4 irregular infantry, 4 irregular infantry
Posted by Jim Gandy at Wednesday, March 10, 2021 No comments:

We have just commenced a Sikh War campaign.  The battlefield commanders are in Hobart with senior commanders mainly in Canberra.   In the first battle at Ferozepore, a British force is being attacked by much larger Sikh army.  The British force of about 7,000 men is almost entirely Sepoys with only one British unit.  The Sikh force comprises 2 divisions of 10,000 men each.  We lack figures specific to the Sikh War so the figures are a mix of substitutes from various periods.

The British force is deployed about cannon range back from a broad ford over the Sutlej River, their line supported by an entrenchment & a small fort.   A wadi on the British right is the only other terrain feature of note.  The 2 Sikh divisions are advancing over the river in parallel columns.

The Sikhs deploy their artillery to their front & turn their cavalry columns to the left & the right.
The British advance infantry on their right & cavalry on their left.

On the right, the British Sepoy cavalry has been broken by the leading Sikh cavalry brigade which has advanced out of the picture frame as the rest of the cavalry of that division is still deploying. after crossing the Sutlej.
In the centre, the Sikh infantry of both divisions is advancing on the forts.
On the left, half the Sikh cavalry has run the gauntlet past the British Sepoys but is now dithering as the rest of the cavalry are still slowly getting across the river & wadi.

On the right, the Sikh cavalry is advancing around the British left.
In the centre, the Sikh foot are firing at the entrenchment & by-passing the fort.
On the left, the British are now withdrawing.

The British are now in full retreat leaving only a garrison in fort.

With the British force being almost entirely Sepoys who are no better in quality than much of the Sikh force, & outnumbered 3 to1, the result of the battle was never in doubt.  But the British Sepoys put up a bit of a show & got away in pretty good order.  The Sikh plan of using their cavalry to outflank & surround the enemy was compromised by the British counterattacks, the wadi & poor command ratings.