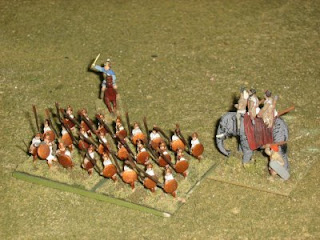 We used the same troops as we had for the Fields of Glory game two days before. The Alexandrian cavalry charged on each flank, taking out the Indian chariots and the Indian Elephants! Things looked bleak, especially as one elephant stampeded into the Indian infantry. Alexander moved in to finish off the poor unit of infantry, which routed. The stampeding elephant then moved into the companions, and sent Alexander routing off the field. Meanwhile the phalanx got to Poros, and left him dead on the battlefield. But with elephants stampeding in all directions, and both C in C's out of action, at this point it was impossible for anyone to do anything. Both armies were in chaos due to the elephants. So it was declared a bloody draw.

Picture is a stampeding elephant hitting the argyraspids from the flank, while a general looks on ineffectually. 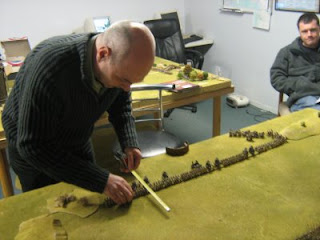 Another trial of these rules. Deployment was slow and complex. Which is generally a good description of the rules in general. But this author enjoyed them as they had minimal record keeping, and once the rules were explained they seemed to flow.

The macedoneans had the terrain advantage, having a superior general. Their aim was to deploy hills everywhere, and find a nice protected defile they could march the pikemen through. This plan failed. They did however get a hill on the Indians left that restricted the Indian deployment. The Macedoneans then had the deployment advantage, and tried to deploy the Macedonean companians last and pick their attack. However, due to terrain, the Macedonean cavalry had to deploy in front of the Indian chariots, cavalry, and some archers -- the worst possible position.

The Macedonean plan was to use the pikes as an anvil to the companions being the hammer. But it worked the other way, with the pikemen going through the Indians like a knife through butter, while the companions were in a desperate fight for survival. Eventually the companions defeated their opposition -- largely through having Alexander lead them. But by that time the Indian right had dissapeared under the boots of the advancing phalanx.
Picture is Carl completing the deployment of the Indians.
Posted by Nick at Friday, July 25, 2008 No comments: 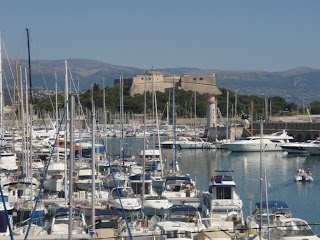 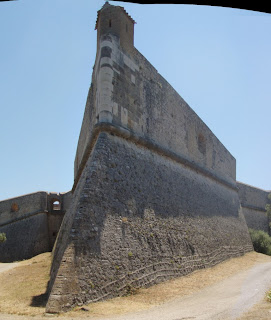 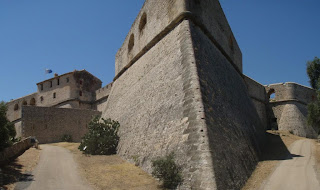 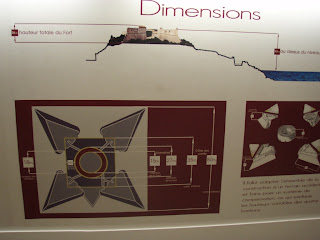 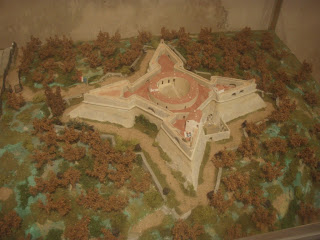 Fort Carre protected the port of Antibes when it was on the French border.

The town once had a wall all round as well, but only the sea wall & the fort remain.

It's a cute little fort. The photos of the model & the plan show the layout better than the actual pics.
Posted by Jim Gandy at Thursday, July 24, 2008 No comments: 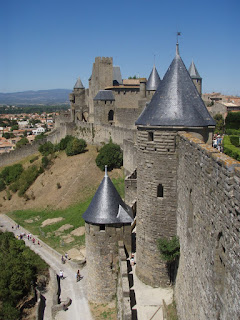 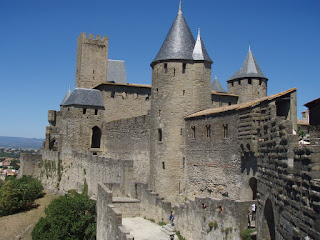 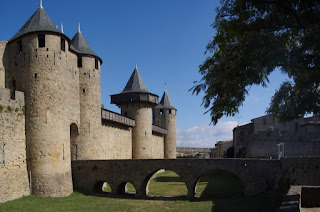 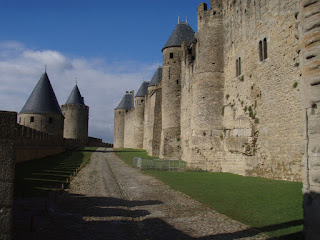 Carcassonnne is in SW France near the Spanish border. In the mid 19th century it's degredation as a stone quarry for teh new town below was stopped & a restoration program started that took 50 years.

The fortifications were started by the Romans & added to over many years up to about 1500.

The restoration has tried to restore the 14th century version. Some of the work is historically suss - in particular the conical roofs are typical of northern France, not the south -but the overall result is magnificent. In the long distance pic it literally looks unreal, but that's exactly how it looks.
Posted by Jim Gandy at Wednesday, July 23, 2008 No comments: 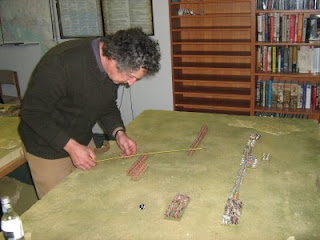 Nick (Leonidas) vs Steve (Xerces).
Steve learnt from his first game and did a masterful double envelopment. However, when things looked bad for the Greeks the Hoplites finally got to grips with the Imortals. The Immortals proven to be pansies rather than he-men, and the Persians collapsed. (The dice gods returned the favor from the first game).

Games was then interrupted by the revelation that Bowler the Younger had spent the whole evening surfing the net rather than finishing his assignment that was due in two days. Incentivization techniques had to be used.
Posted by Nick at Tuesday, July 22, 2008 No comments: 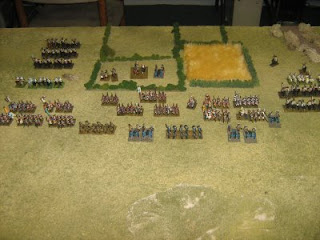 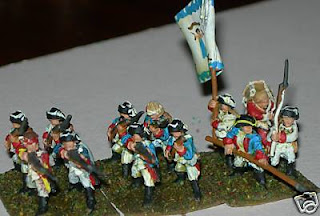 Games moved from Camp Cromwell to the Gaming garage while Jim is away. A quiet night with just Nick and Steve. The night turned into two adults drooling over the new figures Steve just got off eBay -- some absolutely gorgeous 7 years war Prussians. This then turned into an evening discussing rules appropriate for the period.

Next week -- Steve has never played DBA, so a DBA demo game will be provided in epic scale (double all measurements, use 4 stands instead of one -- it looks fantastic. But it is still DBA, for what that is worth). Other tables are free as required.
Posted by Nick at Tuesday, July 15, 2008 No comments:

A Visit to the Western Front 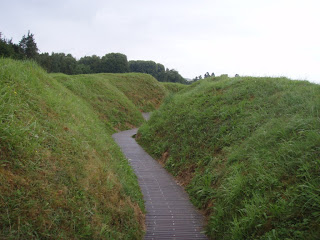 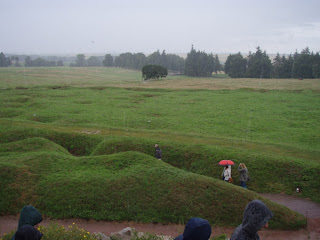 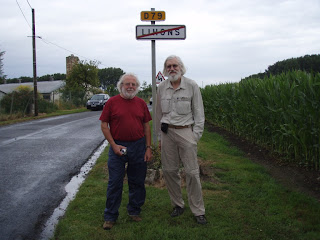 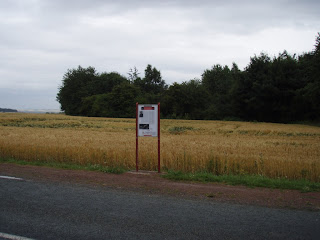 The main battlefields where my Grandfathers hastened the downfall of the Kaiser are conveniently located in a 30 km square east & north of Amiens, an hours train trip from Paris. I did a most interesting day trip there in the company of my pommy cousin George & his wife. We hired a car at le Gare d'Amiens. The weather was grey and showery all day - as it should be on the Somme.
As Monash demonstated, preparation & planning is the key to success on the western front. I had the route pre-planned to minimise distance while keeping things roughly chronological. We located & took all our objectives and got back to Amiens with time for a drink & trip to the Cathedral before our train left. I had the book “Walking with Anzacs” by Mat Mclachlan which was useful for locating sites & for general background, the book “The Story of the 12th” (Lt Gandy was in the 12th battalion & has several mentions), a bound folder with copies of both Grandads’ war records + pages copied from Bean & Les Carlyon’s “The Great War” with me (too heavy to bring) and a 200,000 scale map.
Stop 1: The Le Boisselle bomb crater - allegedly the largest one on the western front. - big hole in the ground.
Stop 2: 1st Division memorial at Poziers. Fine view all round from a viewing platform & a bit of surviving German dug out (Gibraltar bunker).
Stop 3: Mousquet farm. Roadside stop with informative plaque with map.
Stop 4: Canadian memorial at Beaumont-Hamel. Not Australian - but a whole trench system with the cratered no-mans-land between has been preserved - softened by time, but very interesting. There's a useful information centre there too - not to mention a statue of a moose.
Stop 5: An estaminet in Poziers for a drink & a snack. Our Grandad was wounded in this village in what "The Story of the 12th" described as the most intense bombardment the diggers had experienced so far.
Stop 6: The ruined windmill near Poziers.
Stop 7: Chuignes. We identified the woods & ridges that our Grandad manouevred around to outfank fritz.
Stop 8: Lihons: We found the pretty featurless plain that our Grandad penetrated 1.5Km across in the mist & shot up a fritz gun team killing a horse. Somewhere here he won the MC - but no details what for - surely not for shooting a horse?
Stop 9: Richtofen's crash site. I found it easily from a map I had found on the web. It was marked not by a monument (it's not kosher to have monuments to Germans it seems) but by a small roadside sign. My other Grandad, Pvt Mcnamee knew the guy that shot him down - he joined his unit soon after and had told me the story.
Stop 10: Australian memorial at Villers-Bretaneaux. Great view of the Amiens battlefield from the top of the tower.
Pics:
Trench at Canadian site.
View over no mans land at Canadian site. Allied trenches in forground. They got as far as the little coppice - the forward Fritz trenches are just beyond it and the second line near the further line of trees.
Lt G.T.Gandy's decendants at the site of one of his triumphs.
Richtoffen's crash site. 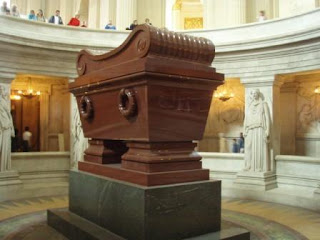 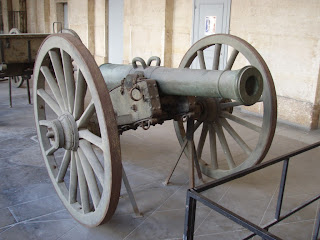 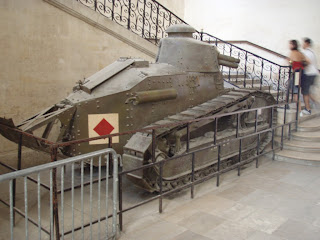 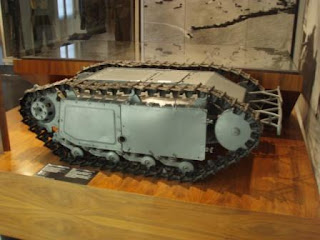 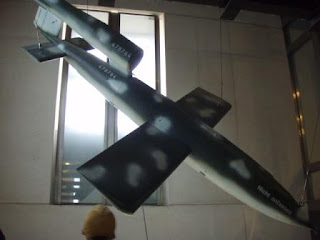 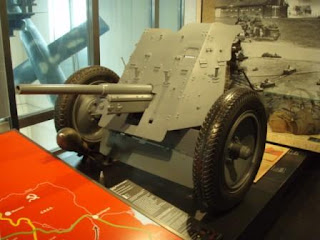 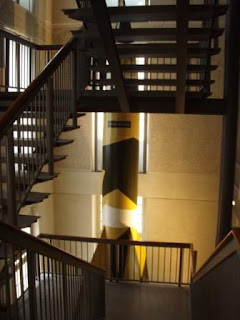 The Hotel d'Invalides in Paris includes the Musee de l'Armee and the tomb of Napoleon.
Their WWI & II section doesn’t have much big stuff, but some nice little stuff. Of course the coolest stuff is German. Items of note included a very cute Pak36, a Goliath, a V1 & a V2. I expected the V2 to be bigger than it was – pity I couldn’t get a better pic of it hanging the stairwell. Not much armour - just one nice little French tank & a couple of turrets.
The Medieval section has enough arms & armour to start the 100 Years War again.
I was most disappointed to find that the bit I most wanted to see – the 18th-19th century part was closed for reorganisation. A few guns in the arcade was the only Napoleonic stuff on display.
Napoleon’s tomb is very impressive.
Posted by Jim Gandy at Sunday, July 13, 2008 1 comment: