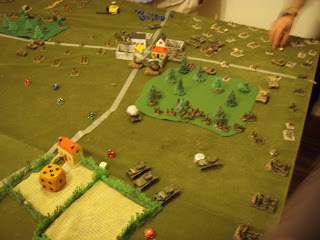 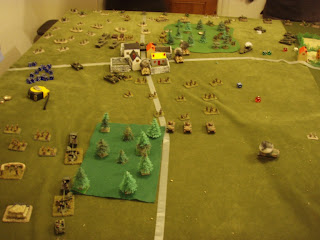 The Brits immediately attacked hoping to strike before the Pussies came. Barrie pressed straight forward while Jim advanced diagonally to the left to support him. The Stugs stepped out from behind the village to meet the M10s, shot badly 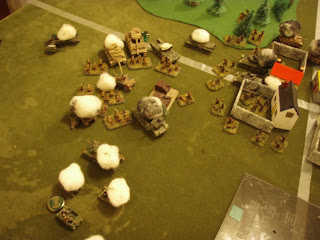 & got just one before failing Stormwtrooper & getting mashed by the crowd of Brit armour. Mark was about to be swamped, but his Tigers & Grenadiers arrived in the right place at the right time to meet the attack.

The Cromwells suddenly turned right and threatened Steve's objective. This intercepted Steve's attempt to move troops to support Mark, & Barrie took possession of the objective. The battle could have ended then, but the Tigers managed to stormtrooper to 95mm from the objective to dispute it. Jim's Cromwells then discovered what Panzershreks & fausts could do as their diversionary attack pettered out against the Grenadiers. The Germans continued to get a good flow of reinforcements into the critical spot while the Brit reinforcements were slower to arrive, then had a long slog to the front. The Tigers sat next to the objective systematically destroying the Brit armour as the Brits brought up more troops. Having lost their M10s, they gave up trying to hurt the pussies with pop guns and went for everything else while the 17pdrs were brought up & deployed on a hill with a view of the Tigers. They got 1 Tiger and Mark's command was reduced to 3 platoons all exactly half strength, but it didn't break.

Up 'till now, the Air had neutralised each other, both sides only calling for it when there were specially good targets, or for interception. But the Hs129s did break though twice - once taking out the Cromwell HQ then later taking out 3 HMG carriers. The Brits only used their Hurricanes for interception as their prime targets were always either in smoke or too close to ground troops.

Having driven off the Cromwells, Steve's Grenadiers were now able to support Mark's Tigers, plus his 105s and Heavy Mortars gave more support. The Heavy Mortars were another nasty shock to the Brits when they blew armour apart with their 3 a/t and 3+ firepower. Jim's Coy failed morale but Barrie's last 17pdr managed to pop the last Tiger before the 105s could get it. Steve's Grenadiers got smashed by Heavy Mortars & and fresh Brit Inf occupied the objective in strength to win the battle.

This was an epic struggle which went on 'till midnight. The Brits used their mobility to gain an early advantage but they just couldn't quite nail it against the German uberweapons. The Tigers were expected, but the Panzer%$#%ers, Heavy Mortars & Hs129s were all nasty too. The Cromwell's 100% casualty rate on their first outing wasn't a good start. Their speed was very useful, but the CT rating's a pain - eagerly awaiting the VB book in the hope that the 7th Armoured Cromwells are CVs.
Pic 1: The Cromwell's diversionry attack is in the forground. The Churchills are taking teh objective in the far right corner.
Pic 2: Same time as Pic 1, but from behind Brit lines. Brit reinforcements are rushing forward in the foreground.
Pic 3: Carnage around the objective at the end - all that armour except 1 bailled bug is dead.
Posted by Jim Gandy at Wednesday, September 26, 2007 1 comment: 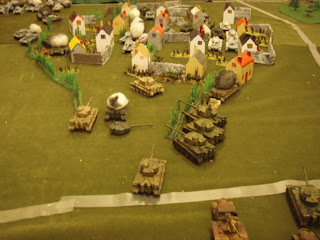 Another one of SteveJ's scenarios at the gates of Berlin with over 3000 pts a side.

The first Russian rush on their right shuddered to a halt when Jim's Panthers & Tigers lept forward & smashed the front row of T34s. The Riussians then became more circumspect & advanced the infantry through the town in front of the armour. There was a confused fight in the town with tanks sniping at each other down the streets. The Grenadiers gave ground to the Strelkovy falling back to the rear edge of the town & their Tiger support to stand again.

Steve renewed the attack on the right with JSs in support of the T34s. The Panthers lost 2 to the JSs, 2 were bailed & 1 was captured by infantry - then they failed morale. But the Tigers wiped out the T34s and then slogged it out with the JSs, helped greatly by Byron getting one bogged in a hedgerow & not getting it free until the rest of the Platoon was dead.

The fight in the town became a stalemate as the 1st Strelkovy & the Grenadiers slaughtered each other but refused to fail morale and burning tanks of both sides blocked up the streets.

At 11pm we agreed to a draw. The battle probably would have been better with a few less troops so we could have fought it right out in the time available. The Germans got a bit of a shock meeting JSs for the first time - we found out why they made KTs.
Posted by Jim Gandy at Wednesday, September 19, 2007 No comments:

Kunnersdorf April 1945 (an historical scenario set up by SteveJ). 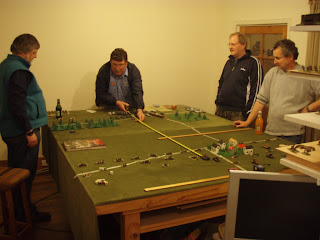 The Germans started dug in & GTG. The Russians started at the other end.
Russian victory condition was for the Russians to get 5 tanks past the Germans & off the far edge. 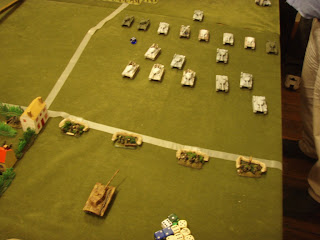 Steve's Grenadiers were on the left with the Pak 40s & his KT & AA behind. Jim's Grenadiers on the right with his KT & mortars behind.

The Russians advanced as fast as they could in an effort to over-run the Germans before their reinforcements could arrive. The T34s were fastest and concentrated on Jim's flank advancing in two waves, Byron in front, Barrie behind. Mark's JSs & ISUs advanced on Steve's flank. The Motostrelkovy in the centre got hit by mortar fire & pinned down as soon as they got out of their trucks - they never got into the action. The Sturmoviks mostly got shot down by 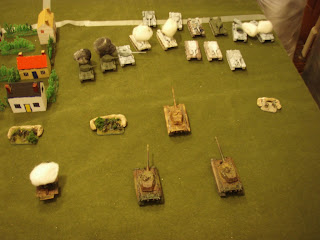 the AA, but Steve's KT had a narrow escape when one got thru the barrage. After that they seemed to lose interest and didn't show up again.

Byron's T34s lost a few going in, but hit the Grenadier screen and killed half of it before it pulled back. Then the 2 KTs came on from reserve at the perfect moment (on the second try) and the Grenadiers counterattacked. The 3 KTs plus Panzerschreck & Panzerfaust killed or bailed the rest of Byron's T34s and the Grenadiers passed tank terror to finish the platoon off. Barrie's T34s then came up, destroyed the Grenadiers and swarmed the 3 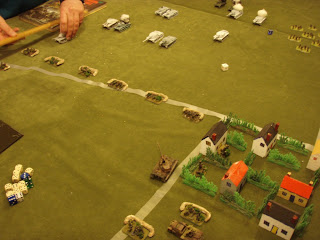 KTs. The KT's beautiful camo jobs were so effective the Russians missed their side shots when they had a chance. Then Steve got the Panthers to come on on their second throw - the T34s did get one KT, but they were outgunned and quickly dispatched.

The Germans thoroughly enjoyed getting their rocks off in a Turkey shoot with their big pussys, but it was still a close run thing. The Germans put up a good defence, but: that Strurmovik only just missed Steve's KT, the German reserves both turned up promptly & the T34's shot badly when they had a chance to hurt the KTs. If any one of those things had gone the other way, the result may well have been different.
Pic 1: How far can that #$%&er fire ?
Pic 2: 20 T34/85s...one KT...come & get it !
Pic 3: The cavalry arrives.
Pic 4: On the other flank Steve's mobile pill box stands its ground.

Posted by Jim Gandy at Wednesday, September 12, 2007 No comments: 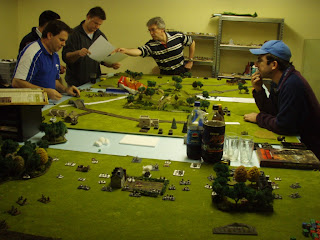 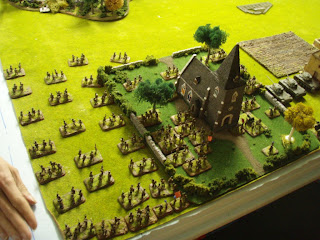 The Kingston guys started their Club Comp last Thursday with 3 x 1500 pt FE games. They are planning to do as much of a round robin as they manage. Each player has a fixed FE 1500 pt list for the duration.

Steve's Strelkovy d. Mark's Canadians
This was a Fighting Withdrawal, Mark defending. Steve put both Strelkovy on his left, Gods spread right across his rear & 2 JS's in the middle. His hordes (see pic 2) just overwhelmed Mark's right before he had a chance to remove any objectives. 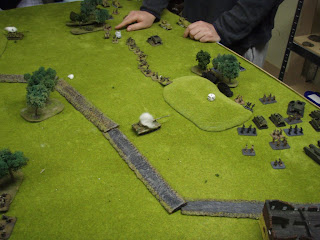 An Encounter Battle. Keith did have a bit of luck with his Typhoons taking out the Kingtiger (see pic 3 for burning KT), but that was the extent of his joy. His Churchills turned up on the wrong flank and didn't get into the action. His reserves arrived too late. Their desperate attack to retake their lost objective shuddered to a halt under the MGs of the Panzergrenadiers. 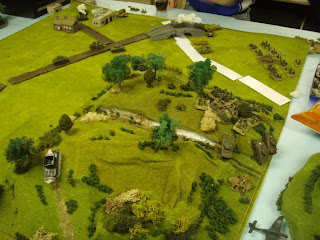 Another Encounter Battle. Things didn't look good for the US at the start - the Germans had one objective nicely placed on a Difficult hill protected by Grenadiers, the other tucked in a corner nicely protected by more Grenadiers plus a Kingtiger. But the Shermans charged forward anyway. The Kingtiger was surrounded and destroyed by a lucky side shot, but 3 Stugs had come on and the victorious Shermans were clearly not long for this world. In the centre another Sherman Platoon + 2IC charged over the hill at the Grenadiers (see pic 4). 2 got bogged down, one got pinned by a bazooka, but the other appeared to be manned by John Wayne - the terrified Grenadiers fled abandoning the objective. Griggsy desperately threw his AA half tracks up the hill to dispute the objective, but the first got taken out by John Wayne & the other got bogged down. A surprising win for the US - goes to show that fortune favours the brave.
Posted by Jim Gandy at Sunday, September 09, 2007 3 comments: 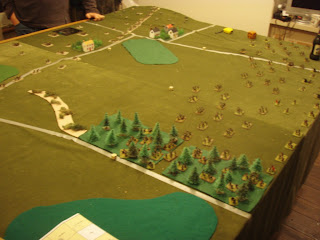 Excerpt from the papers of General Guisseppi Gandini - part 3.

These are documents found at the home of a Signora Gandini in Montepulciano, Italy during the advance of 1944. They provide much valuable information on the Isdonisgrad campaign in Russia September 1942. The papers have been translated from the original Italian by Lt Sneak-Jones, British Intelligence.

This part concerns Turn 1 of the Isdonisgrad Campaign 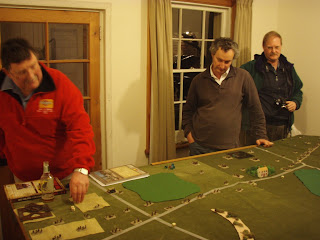 Last week, it was a very disappointing start to my new command. This Russian weather was so bad I had to delay the attack for a week. First it rain for days, then I have to wait for the mud to dry so my Fiat she not get dirty.

But today, it all changed and all is bellissimo! The 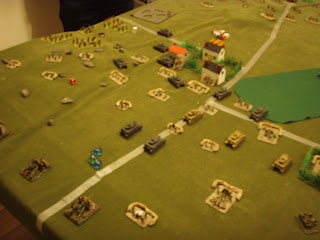 sun shine and the Panzers rolled. In just one day my men have blitzed 2 hexes into Russia on both flanks. My troops are already at the gates of Myskina & Isdonisgrad is almost surrounded.

Only at Jayfivisk, just south of Isdonisgrad did the Ivans make a stand. There, Kapitan Hundzuchter’s Grenadier Coy, they pinned down a Strelkovy Coy while I send forward Kapitan Jendich’s & Kapitan Steurmann’s Panzers from my cunningly placed reserve. The Russians tried a flank attack on our left, but our mortars, grenadiers & panzers stopped them dead in their boots. The rest of the Russians then fled in a 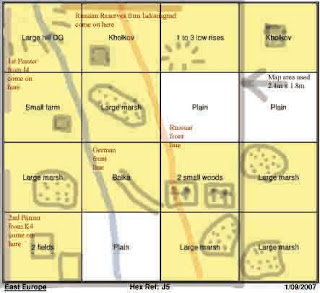 rabble before my Panzers.

Mamma, I’m so pleased with myself! Herr Hitler will be so happy, I’ll not get shot. And maybe he give me the Iron Cross. Very clever these Germans - the Iron Cross they hang round tour neck on a ribbon - that way you don’t got to take any gold braid off your uniform to pin it on. Is a nice medal too.