On March 1 Chris, PeterW & I flew to Delhi & there rendevouzed with Renfrey.  We had a car & driver organised & the first thing we learned on the drive from the airport to the hotel was the wisdom of the advice not to drive yourself in India.  The roads are a torrent of trucks, cars, motor bikes, push bikes, tricycles, hand carts, horse or ox drays, tractors, tuk tuks, pedestrians, sacred cows, sheep, goats &  camels, not all of them going in the same direction.  The only discernable road rule was to get out of the way if the vehicle behind honks at you - so there is a non-stop cacophony of horns.  But Prem, our driver, turned out to be a treasure & somehow took us safely through the mayhem, even though it seemed that at all times he had one hand on the horn & the other on his phone.

The battlefields were usually not that informative really, because they were fought in flat terrain without significant terrain features & the field fortifications have generally not survived.  But they were interesting nevertheless, not only for the achievement of finding them, but the taking of us right off the tourist track to see the real rural India.

At the Aliwal Memorial

On the banks of the river at Sobraon

I missed out on the Pakistan expedition because my Pakistani visa did not come through, even though it was applied for 3 months ahead.  Instead, I kept our Indian driver (who could not go into Pakistan) & took a more conventional tourist trip to the Himachal & Shimla, the winter capital of the Raj.  The others explored the battlefields of the 2nd Sihk War & also thought they found Alexander's crossing point of the Indus.  It seems the main differences between Pakistan & India are that the roads are even worse in Pakistan, & that in Pakistan you can get beef, but not beer, whereas in India you can get beer, but the only meat is chicken.

After reuniting at the Pakistan border we headed south to Agra, then east to Lucknow.  The main military sites being a series of forts. 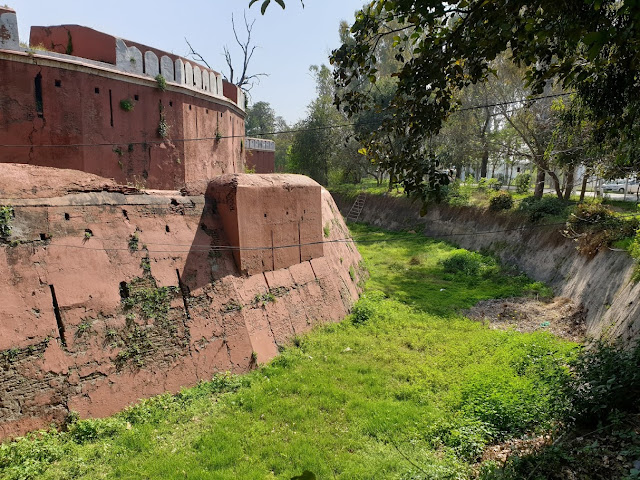 The fort at Phillaur in the Punjab - still in use, now as a police academy

The Red Fort at Agra - 2nd largest in India

The fort at Gwalior

The fort at Jhansi - defended unsucesfully by the Rani of Jhansi

Site of the British defence compound at Kanpur - surrendered

The Residency at Lucknow - held until relieved

When we started the trip the Coronavirus was still a Chinese problem, but it gradually escalated.  The hotels began asking us to fill out a form saying where we had been.  Then they began taking our temp at the front door.  Chris & I had intended to go trekking in Nepal after Lucknow, but the border was closed a few days before we were to get there. When we got to the Residency at Lucknow we were denied entry as that day the Indian government closed all the Historic Monuments in the country.  By then it was then clearly time to go home.  We re-booked our flights & executed a smooth withdrawal via Delhi & Singapore.  We are now home, but under Coronavirus house arrest for 14 days.

It was a great trip that only just avoided being kyboshed by the Coronavirus.  I can't say I actually liked India - one can only take so much of the crowds, the traffic, the poverty & the grottiness.  But it is certainly a fascinating place & well worth a visit.
Posted by Jim Gandy at Saturday, March 21, 2020 4 comments: