Last Tuesday was a BA night. 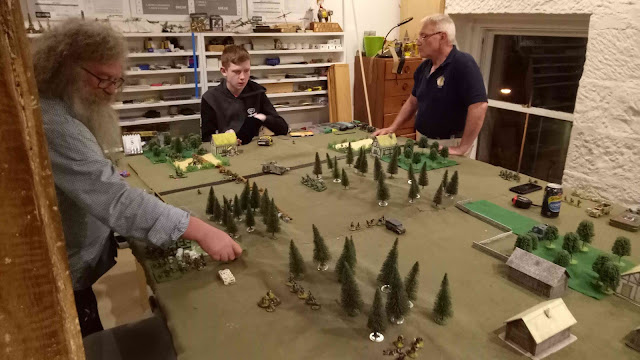 Renfrey played Chris in a WWI action (with some house rules for WWI). 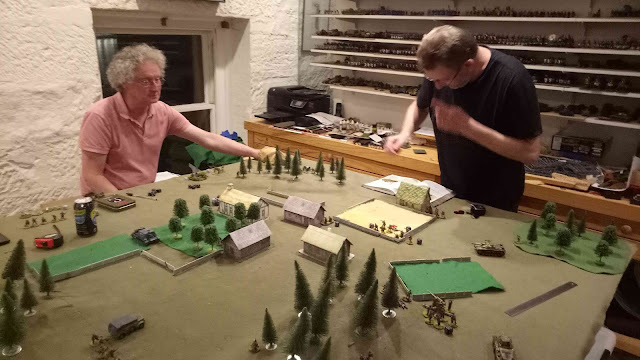 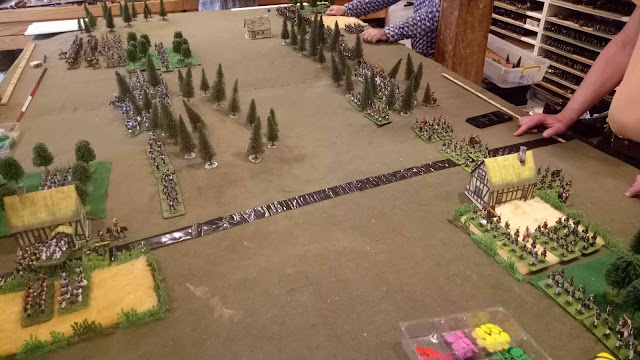 The French are on the left in this pic.  Mike v. Steve on this flank.  Renfrey v. Nick in the centre & Jim v. Chris on the far flank. 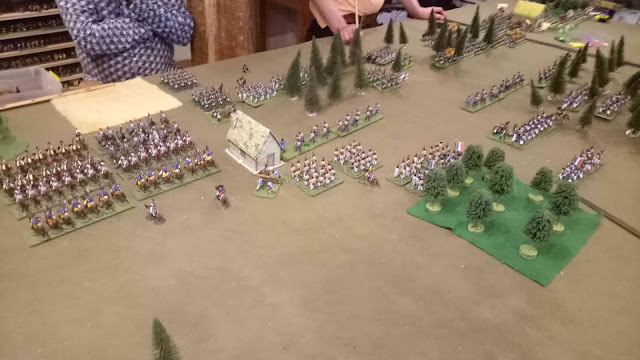 The French attacked on their left holding their outnumbered right back. 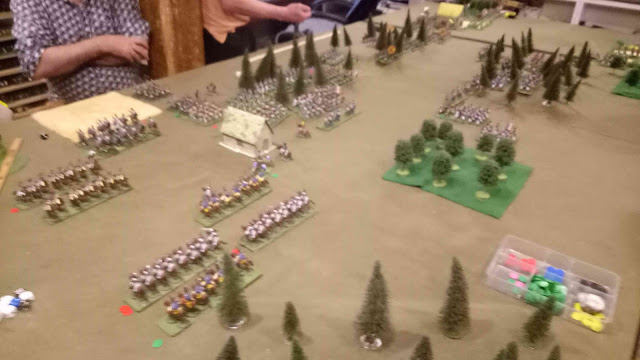 The French got the worst of the cavalry clash & fell back as their infantry charged the hill left of centre. 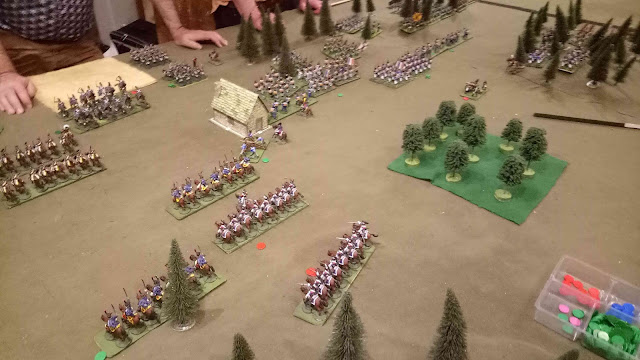 Due to poor command the Russians were unable to exploit their initial success in the cavalry fight & legere & artillery in & behind the house started whittling them down as the French cavalry tried to rally. 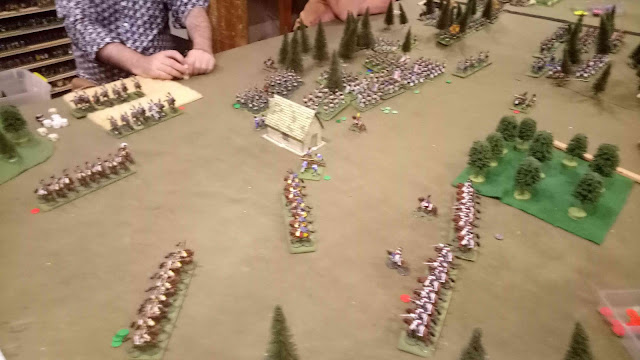 The Russian cavalry continue to be worn down by French fire as the infantry fight rages around the farm & in the wood. Renfey is adding some support on the right of Jim's infantry brigade. 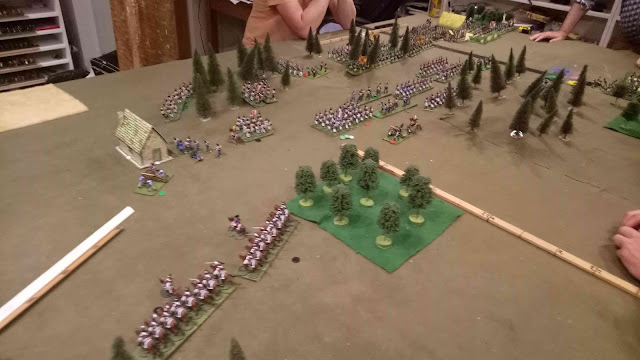 The Russian right has broken - both infantry & cavalry.  They have lost 2 out of 4 brigades while the enemy have lost none, so the Russians fail their army army break test.  Steve's half of the Russian army can withdraw with minimal casualties.
Posted by Jim Gandy at Tuesday, November 13, 2018 No comments:

Chris commanded the Carthaginians (far side of the table) & Jim the Romans.  Peter set up the battle close to the original deployment except Hannibal kept his elephants in the rear 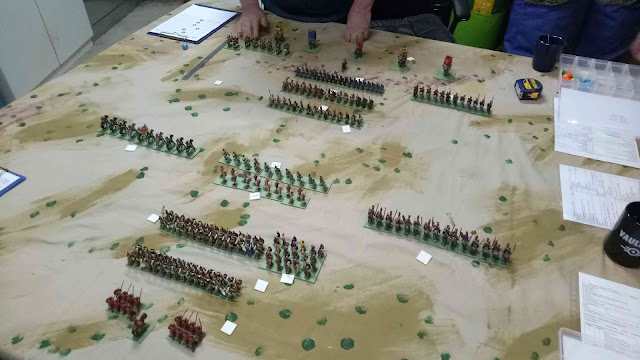 The Romans advanced with their cavalry going ahead while the light troops slimished in the cetre. 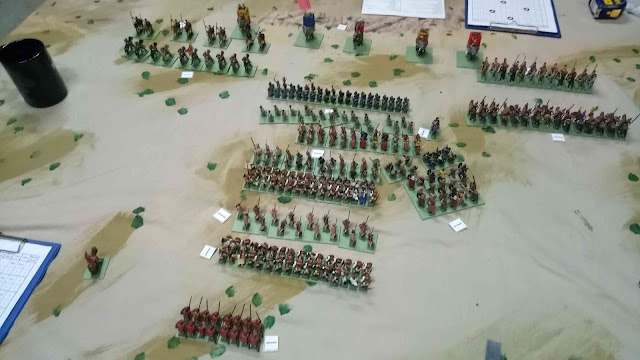 The light infantry have been withdrawn & the Principes have attacked witht heir numidian allies covering the overlap on their right.   The Triari are being shifted to the left. The Punic 2nd line has shifted sideways to cover the overlap of their front line.  The cavalry have engaged on each flank. 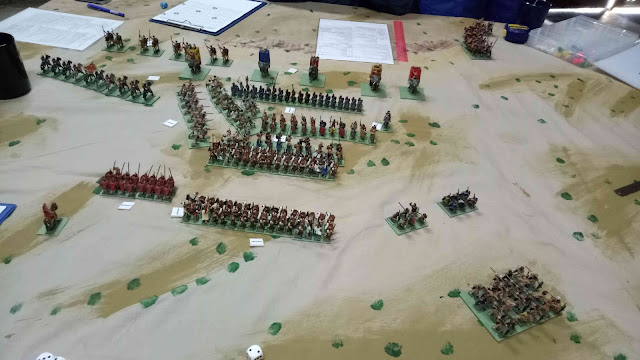 The Numidian infantry has broken on the Roman right, but the pricipes are getting the upper hand against the Punic 1st line.   The Punic heavy cavalry has broken & the Numidians have pursued.  The On the Roman left, the Triari are advancing & both sides have shifted their light infantry there.  The light cavalry fight on the left is still indecisive. 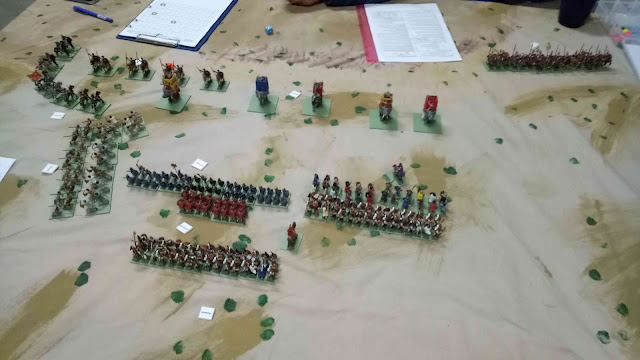 The Numdian heavy cavalry has rallied, but cannot approach the elephants, which are doing their job of protecting the rear of the Punic foot.  The Principes have broken the Punic 1st line & rallied back.  The Hastasi have now charged the Celts in the Punic 2nd line while the Triari have engaged the Punic veterans of their 3rd line.  When the Celts broke the Carthaginians failed their army morale test.  Once again Scipio has won.

Peter's Strategos rules are lumpier & less flamboyant than Hail Whoever, but the game flows well & provides an interesting bit of variety. 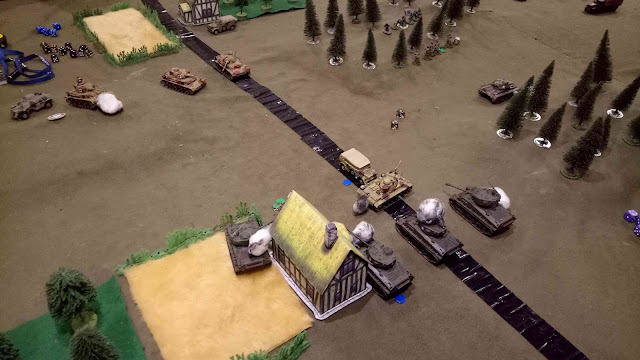 Rob's Panzers took on Mike's US armour (1250 pts).  The tone was set on turn 1 when Mike threw 3 1's  in succession firing at the exposed MkIII.  The Mk IV's moved up & the table was on littered with burning Shermans.  A big win for the Germans. 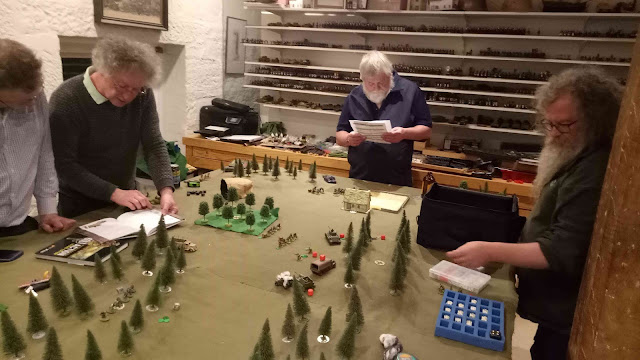 At the other end of the table Steve's Germans made mincemeat of Chris' Ivans in a 1,250 pt infantry game.
Posted by Jim Gandy at Wednesday, November 07, 2018 No comments:

Bolt Action with some house rules for WWI.
Scenario 7: Envelopment, with some modifications.
Chris' British defended with half units on table in improvised defences.
Jim's Germans attacked with all units in the first wave.
Both sides were allowed more artillery with 2 medium batteries off table.
The attackers were allowed 2 barrages & 1 tank. 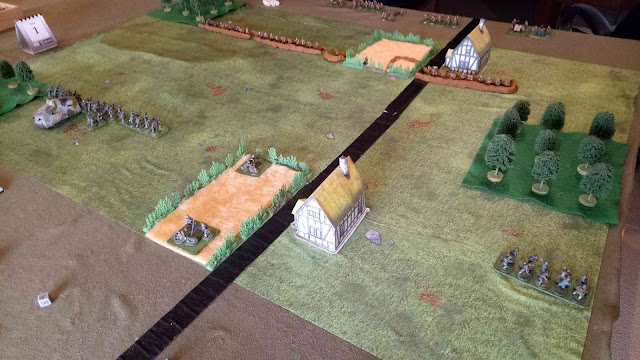 The Germans made their main attack on their left where a ridge gave some cover to the start of their advance. 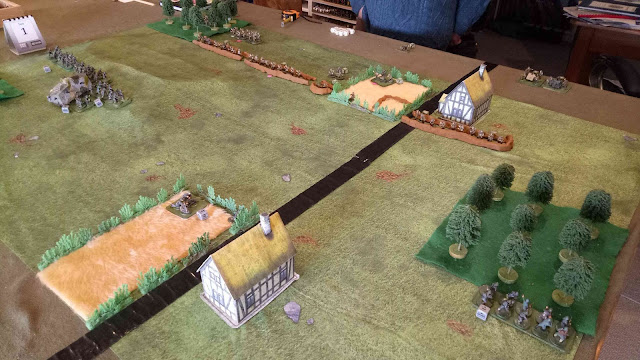 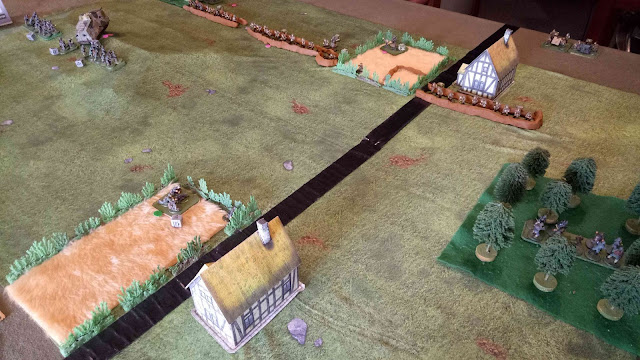 The first German infantry squad to go over the ridge was blown away so the Germans paused  the advance while they did some more softening up. 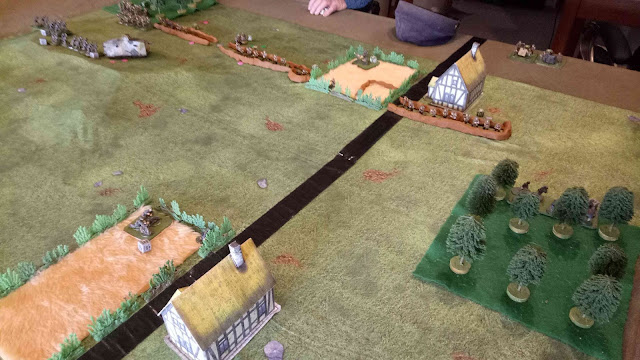 The Germans resume their advance. 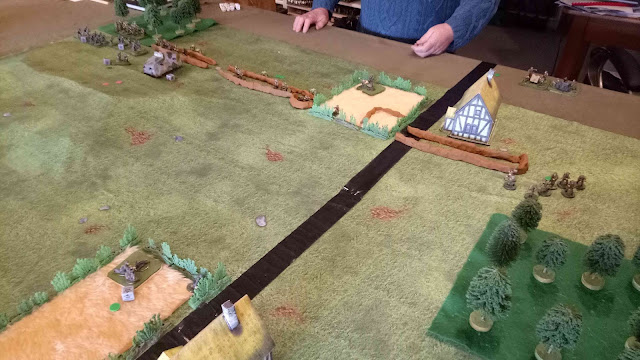 The German's secondary attack on the right has been broken by Brits counter attacking out of their trench. 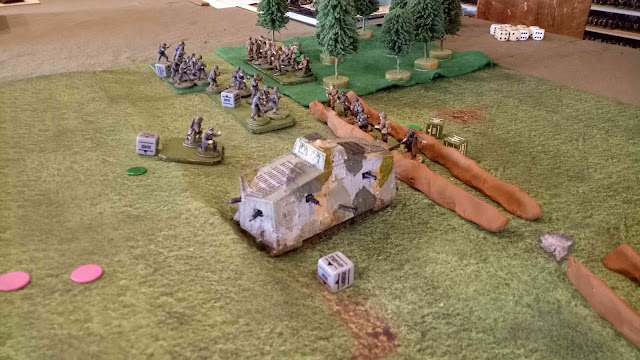 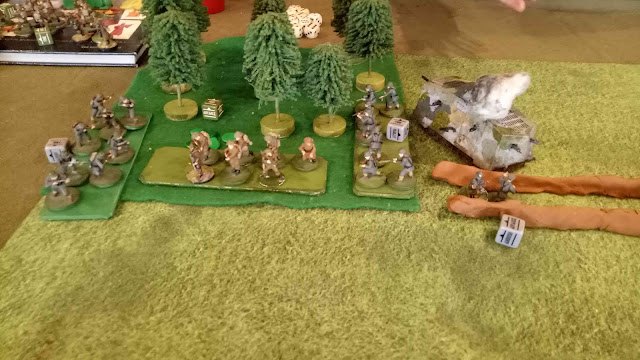 The British have taken out the tank with mortar fire, but too late to stop it breaking through the line.

The game ended after turn 6.  The Brits had destroyed 5 units giving them 10 VPs.  The Germans had destroyed 6 units & got 3 units into the enemy deployment zone so have 12 VPs.  The attackers have won though at great cost to both sides.  So WWI.

The balance of the scenario seemed pretty good.  There were times when it looked like the Brits were on top & vice versa.  If they'd got the tank just one turn sooner it could have been very different.
Posted by Jim Gandy at Sunday, November 04, 2018 1 comment:

Dave Hay invited me to join him in a visit to a neighbour he has discovered with an interest in wargames & space for a big table.  Dave & Stewart commanded the Brits (on RHS in pics), Jim commanded the French.  Both sides had 3 infantry brigades & a cavalry brigade.  Two infantry brigades each were on the table at the start with the other brigades coming on as reserves along the road using the FOW reserve rule. 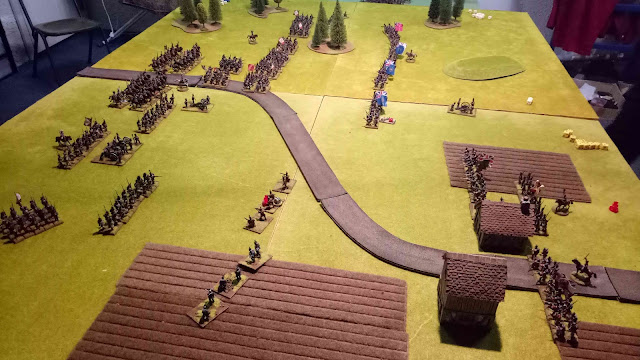 The French were fortunate to get their infantry reserve on turn 1 & their cavalry on turn 2. 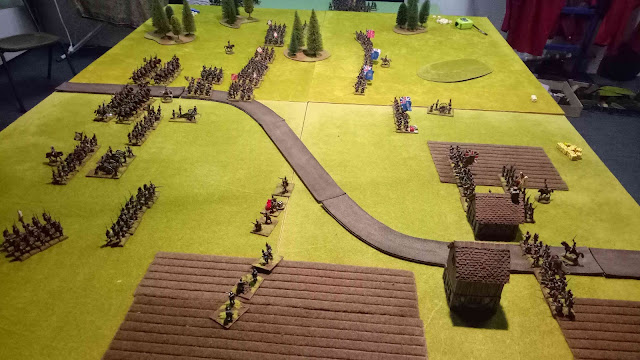 The French saw the opportunity to destroy the enemy's right before their reserves could arrive & advanced their left as fast as the command dice would allow. 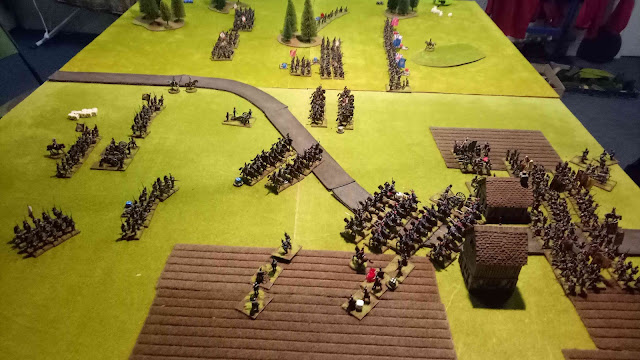 The Brtish reserves came on turns 3 & 4 as the French cavalry advanced in the centre to prevent the Brits supporting their right & massed infantry to attack on their left.  However the left flank infantry brigade blundered backwards instead of attacking giving the British right a reprieve while their cavalry also blundered into charging forward.  Half the cavalry charged a square on the left of the Brit's right & actually broke it by a combination of hot dice & previous casualties to artillery, then rallied back.  The other half charged the head of the British cavalry column & bounced off. 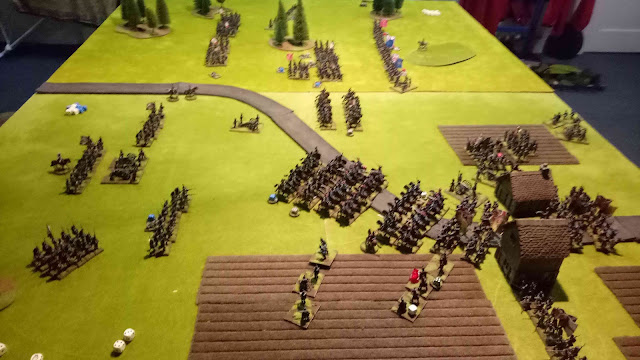 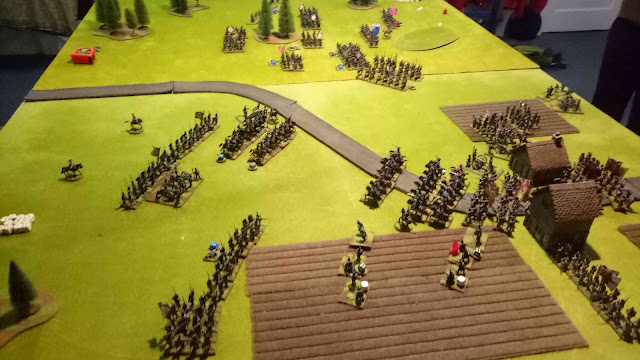 The French have renewed their attack on the Brit right with foot & horse as the British left has become a confused mess around the village as their brigades intermingle. 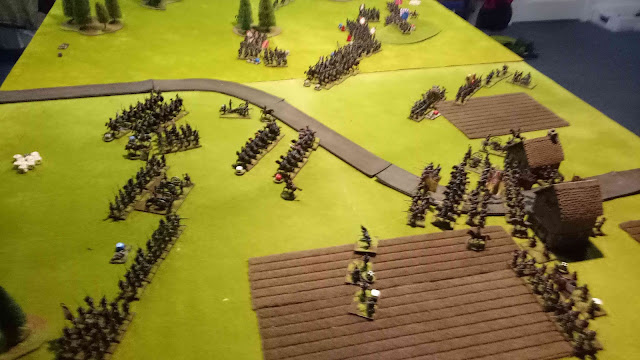 The Brit right is on the brink of breaking but is hanging on making a fighting withdrawal.  The Brit cavalry has driven their French cavalry back behind their infantry.   The Brit left is finally getting itself sorted out. 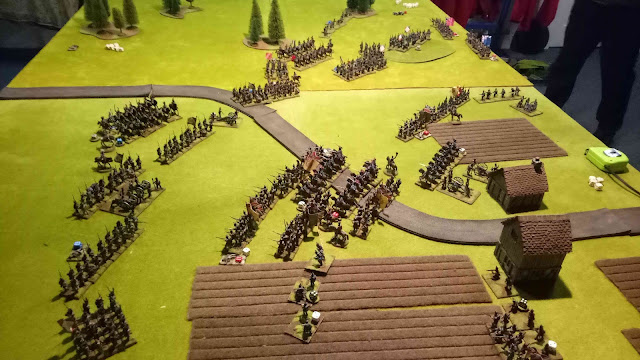 The British left fank infantry has finally moved up to attack but their right has finally broken. 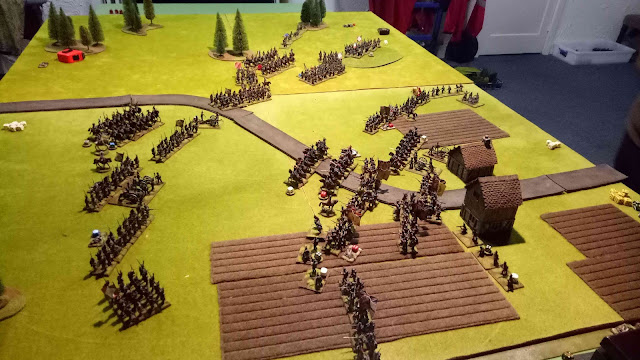 The British attack on their left faltered against the French defensive line of artillery & infantry & they have fallen back.  The French left has reorganised to turn on the British right flank.  But night fall is approaching & both sides conceed that there isn't enough time left for a decisive result.

The British made a serious error in deployment in leaving a brigade out to dry on the right when their reserves were going to come on their left.  The British reserve's deployment was also hampered by being behind their left flank brigade while the French had left a gap in their centre for their reserves to slot into.  The French saw the opportunity, but blunder dice & stubborn defence by the Black Watch delayed the defeat of the British right long enough to rob them of time to gain an over-all victory.
Posted by Jim Gandy at Sunday, November 04, 2018 1 comment: