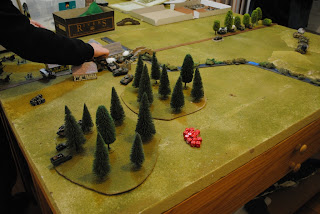 We did a Roadblock to practice a less used mission. 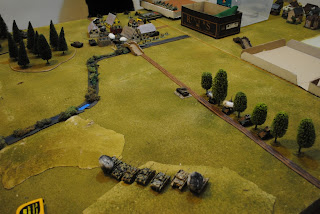 The Panthers took the objective in the village, but the US Mech & Cmd rushed up to contest.  Faced with a shirtfight against infantry dripping bazookas while TDs sniped at them from behind, the Panthers pulled out, leaving one burning behind them.
On the other flank the Stugs took on the Shermans in the tree line.  They destroyed them losing 3 Stugs in the process, but there was now nothing between them and the objective.  They took the objective, but by now the US artillery had deployed. The 155's killed one & the 105's another.  The Stugs failed morale, then they failed commander re-roll, and the US lived on. 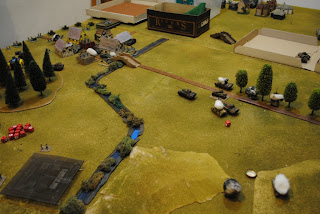 On the other flank, the Panzer Grenadiers attacked the TDs in the wood, but were stopped by AAMG fire.  The Neblewerfers arrived too late to do anything.  But the Panthers had switced flanks and retook the 2nd objective.  Again the US artillery was their only hope.  Again they got a kill & a bail.  Again the Germans failed morale.  This time it was all over for Adolf.  The US artillery saved the day - but even so, the Germans had to fail 3 consecutive 50/50 tests to lose.
Posted by Jim Gandy at Wednesday, September 29, 2010 2 comments: 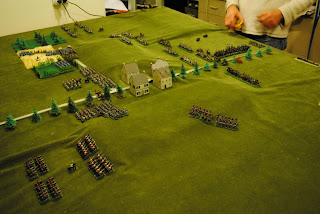 We made a rather more cluttered battlefield this time - with a dominant village in the centre.  Both sides were about 1200 pts.  The French had more cavalry, but the Austrian Generals were 6's compared with 8's for the French.  The Austrians had more infantry units, but the rench units were bigger. 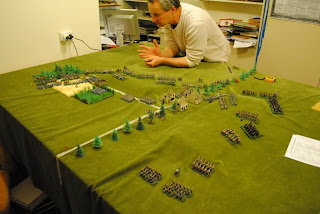 The Austrians made a steady advance on their right & centre.  Their cavalry was initially behind the centre, but was moved to the left to face the French cavalry. 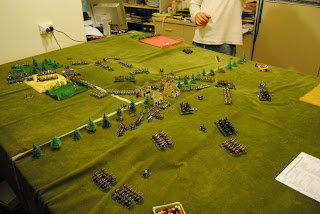 The French advanced their left into the corn field & farmyards to defend that flank.  In the centre the infantry were formed up into attack columns to rush the village.   Despite poor command they did get into the village first because they took maximum advantage of every good command roll whereas the Austrians made more measured advance.   The French had superior cavalry - all deployed on their right, but with their poor command, just could not get most of it moving.

While the French bemoaned the failure of the cavalry to do anything, the Austrians made converging attacks on the farm & the village.  The Bavarians in the farm fought well & although broken themselves, so were both the enemy brigades attacking them.  Likewise the French in the village fought well.  Eventually they lost the front houses, but they had caused enough damage for the enemy to be on the point of breaking.

On the right of the village the small French brigade became exposed when the cavalry refused to support it.  But they only lost 1 battalion to the Austrian cavalry & the remining 2 battalions were in good shape.

Even though there were a couple French routs in the centre, the Austrain cavalry were pretty well spent & it was only  going to be a matter of time until the French cavalry got moving & finished them off.  With 2 brigades broken & the other two on wood, the Austrians conceded.

The pics are all taken from behind the French left.  Note French Cavalry still where it started at the end.
Posted by Jim Gandy at Monday, September 20, 2010 No comments: 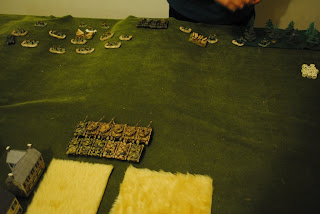 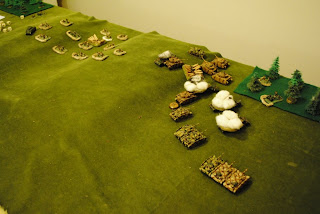 The Germans took the subtle approach & charged the objective with 12 Panzers.  One MkIV got scratched as the Panzers rushed past the burning Cromwells and squashed the A/tank guns on the objective.   (Pic 2).  When no Allied reserves arrived on turn 4 it was all over in 30 mins, including set up. 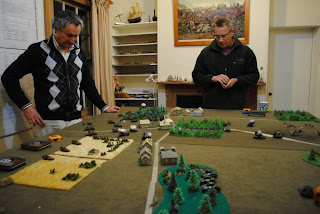 Meanwhile on the other table the bombardment continued on from last week as the two armies spared at each other, both unwilling to risk an attack.

After two night of glacial progress they agreed to a draw.  Sometimes even FOW produces a dud battle with an unfortunate mix of lists, terrain & mission that leaves both sides thinking they can't attack.
Posted by Jim Gandy at Tuesday, September 14, 2010 No comments: 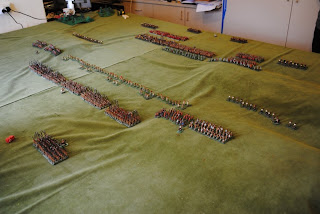 The Syracuse army (left front in pic) was a big phalanx with peltasts on the right, cavalry on the left and a reserve phalanx uit on the right rear.

The Carthaginians kept their heavy cavalry in reserve, citizens in the centre with spearmen each side & their gauls in front on their right.

Both sides had screens of skirmishers, foot in the centtre & cavalry on the wings. 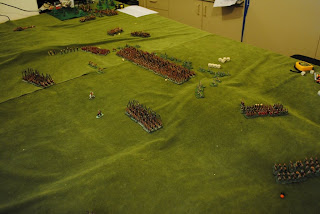 Syracuse advanced on the whole front, but the slow phalanx was soon left behind.  The Carthaginians moved their reserve cavary to the right to counter the enemy's cav, charged with the Gauls and held back the main line.

The Syracusians were hoping to win a flank while the phalanx was plodding forward & then hit the centre front & flank, but they lucked out on both flanks & also lost a unit to the Gauls.  Their attack then became a simple frontal assault.  Alas the Gods did not favour them there either, and the Carthaginians prevailed.

Another enjoyable battle as we ironed out a few more bugs in the rules.

Posted by Jim Gandy at Saturday, September 11, 2010 No comments: 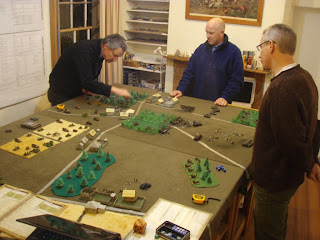 Both sides have big infantry based armies.  AS is his usual way, Steve hung back & dug in.  Rich made a slow advance.  We called it a night with light losses on both sides and the Canadians maybe poised ready for a push.

To be continued next week.
Posted by Jim Gandy at Tuesday, September 07, 2010 No comments: 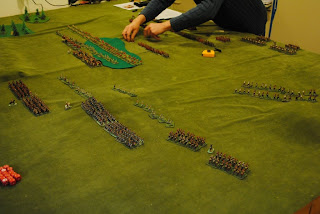 Another playtest of the ancient rules Peter & I have been working on. 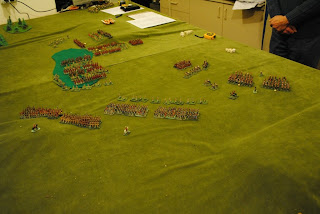 Both sides deployed with a strong right and weak left.  The Carthaginians put elephants & Gauls on the left, spearmen in centre & all their cavalry on their right. (The green patch is rough ground which affects cavalry & spearmen much more than others).  The Romans deployed infnatry on their right & cavalry echeloned back on their left.
Carthage advanced on the left and in echelon on the right.  The Romans advanced their infantry & held their horse back with tiari to fill the gap. 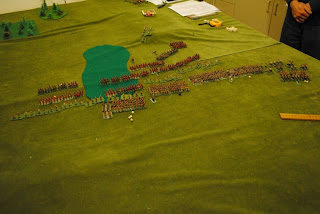 The elephants & Gauls were quickly defeated by the Roman foot, but they inflicted enough casualties & provided enough entertainment to satisfy their commander.
The Carthagian cavalry took a while to get to their opposition, but soon cleaned them up while their supporting infantry took out the triari flank guard.
The battle now became a revolving door as both sides battled the command system to reorganise their lines at right angles - in both cases overlapped on their left.  The middle of the lines became an arm wrestle as both flanks got chewed - reaching the point where both sides would fail morale with just one more rout.  The Carthaginian cavalry could have won the day in their attack around the flank, but the Romans turned a shaken second line unit around to face.  It beat off two charges to buy time for the Roman flank attack to win the day.
While we found a few items that need more work, it was an interesting & close battle which we both enjoyed.  The pics are all taken from behind the Carthaginian right.
Posted by Jim Gandy at Saturday, September 04, 2010 No comments: 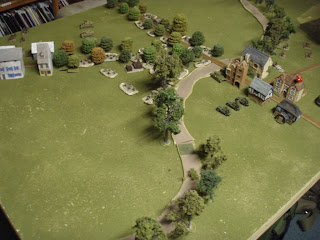 The France terrain recipe came up with an interesting table cluttered with a tree lined stream, tree lined roads & villages.  (The tree lines do not impede movement but block LOS).

The Germans got their MkIV's on early and they pounced on an isolated rifle plat - only to be beaten off losing 2.  The survivors sat back to blast the infantry away instead - a slow process, but eventually successful.

The Brits got their reserves at  a steady rate and attacked with infantry & Matildas.  The German infantry fought valiantly but had to give ground before the mighty Matildas, but their reserves arrived too late to help, the Luftwaffe was useless and 3 MkIVs were not enough to stop Munt's well coordinated attack. 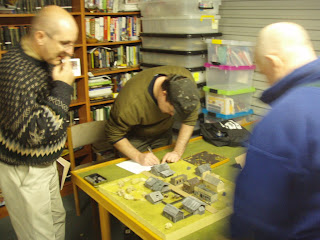 Both players enjoyed the game - finding Early War quite different from later periods.
Legends of the Old West
Meanwhile, Nick, Joe & Leigh fought a wild west game.  Your correspondant was somewhat preoccupied on the Western Front, but it seems the Leigh's Mexican bandits had a gay old time shooting up the town.
Posted by Jim Gandy at Saturday, September 04, 2010 No comments: 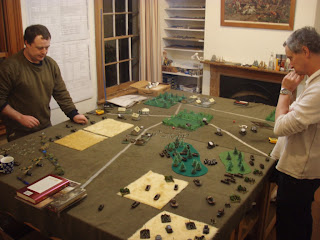 Joe put up a stout defence for long while, but  Steve's multi-weaponed force had an answer to everything he had & wore him down until he failed army morale.   But it was Joe's first go with Allied airborne & valuable experience.
Posted by Jim Gandy at Wednesday, September 01, 2010 No comments: