Steve and Nick, Blitzkrieg Commander. The scenario for the trial version that used to be available on the web.

To cut a long story short, we both agreed we prefer Flames of War. Each side concentrated on moving their tanks, and their infantry were ignored as a side show. This may have been inexperience with the rules, but there just wasnt that feeling of 'fun' that we get from Flames of War.
Posted by Nick at Wednesday, August 20, 2008 No comments: 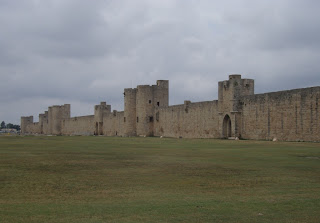 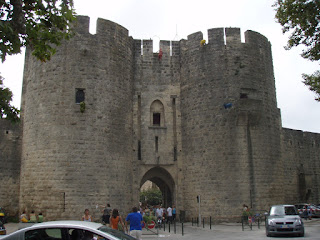 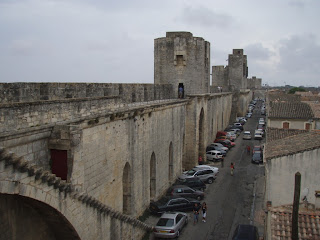 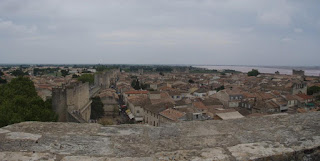 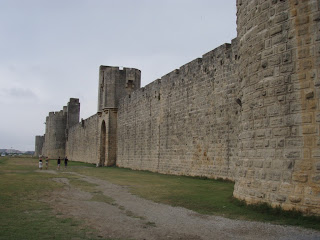 Aigues-Mortes in the Camargue rivals Carcassonne - if somewhat less spectacular being in a flat swamp rather than on top of a dramatic hill..
The 13th century town wall is virtually intact forming a rectangle about 0.5 km square around the old town. It was originally built to protect the port which was then the Kingdom of France's only Mediterranean port. But after a hundred years or so, the port silted up & territorial gain gave the King a better port in Marseilles, so the place became a backwater (as it is named...Aigues-Mortes = dead water). It was still the only fortification in the whole area - presumably the only place where stones didn't sink into the swamp, so it was maintained as a garrison town and/or prison unit the 19th century. The place was such a backwater that using it as a quarry wasn't necessary so it survived pretty well intact until it's worth was appreciated. It hard to tell how much is restoration, but very much less than Carcassonne and what they have done is more authentic.
Posted by Jim Gandy at Friday, August 08, 2008 No comments: 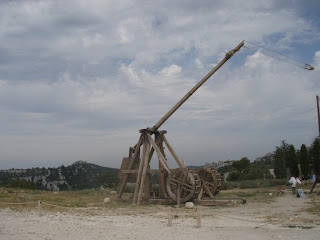 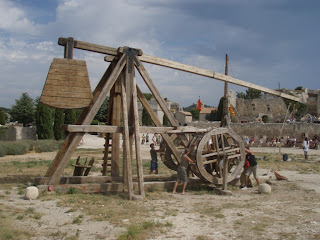 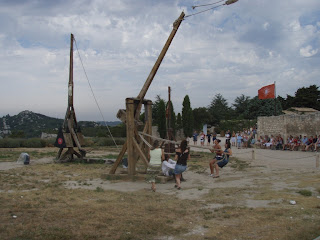 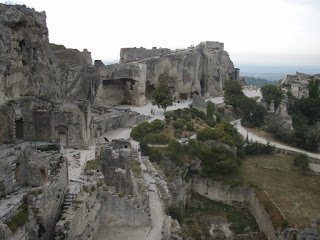 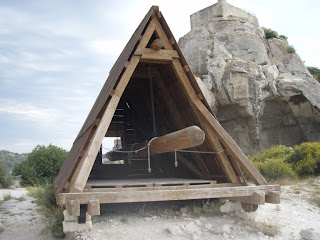 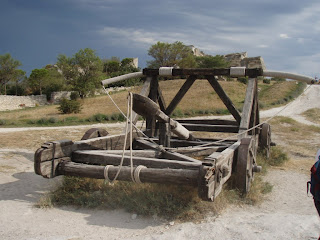 Les Baux is a medieval citadel on a rock. Most of the fortifications were pulled down at the order of a King who was sick of having uppity barons defiantly sitting on impregnable hilltops, but what remains is pretty impressive. However the main attraction of the site is it's collection of reproduction siege engines including trebuchets which they fire off two of 4 times a day in summer.

The biggest trebuchet is a bit bigger than mine, but not much. They throw a 150mm diam plastic ball full of water about 80m in the demo. The machine could clearly do better but they have downpowered it for safety reasons. It's a pretty good looking machine & has some nice features. The winches are very neat - they get 6 volunteers to wind it up. They have a cunning method of avoiding the issue of reconnecting the winch rope each time. After cocking, they unreel the winch & loop the rope around a pin on top of the arm so it is launched with the missile, but tied to the top of the arm, it drops back. This loses some efficiency as energy is sucked up accelerating the rope, but for their purposes efficiency doesn't matter, while the ease of use does.
They also fired their traction treb. It didn't fire the missile far - partly because of inexperienced crew, but also it is not a well designed traction treb - far too heavy in construction - they should be very lightweight - their purpose is rapid fire anti-personnel, so they don't have to be heavy.

There were a couple of other small scale trebs they didn't fire off - toys really. Their battering ram looked pretty good. They also had a ballista of sorts - made from an 18th century engraving combining a crossbow with torsion action. It looks good but it's rubbish - the dreaming of an academic with no idea about what makes engines work. The machine clearly has never worked - the torsion mechanism is far too flimsy to do anything.
Unfortunately, the trebuchet operator's Anglais was on a par with my Francais and we were not able to enter into a productive discussion.
Posted by Jim Gandy at Friday, August 08, 2008 No comments:

We tried Alex vs the Indians using Warmaster Ancients. Nick was destroyed in short order, with Alex falling to some medium cavalry (and helped by some chariots), and the phalanx being trampled by Elephants.

We both decided we liked the warmaster system. It was a fun battle that could have gone the other way if Alex had managed to keep his troops in a coherent formation!
Posted by Nick at Tuesday, August 05, 2008 No comments: