A gathering of much of the old mob from the 70's: PeterW, SteveD, Renfrey, Jim, Chris & Mark

The British are on the near side.  They are advancing their left & centre, holding back on their right.  The Continental army has Miltitia on the far flank, regulars & woodsmen in the centre & their French allies on their left.

The fighting begins with the woodsmen taking the farmhouse.

On the far flank the militia are slowly advancing on a weak British left.  In the centre the Brits are attacking the farm house & deploying in the field & orchard to meet the French infantry.  The Hesian infantry overlapped the  French left & broke the end unit with musketry.

The British infantry have taken the farmhouse.  The French infantry have pulled back while their cavalry charged the Hessian infantry, but were repelled.

On the far flank some Indians in the woods & a grenadier battalion delay the attack of the Continental militia. In the centre the woodsmen have fallen back. On the right, the British keeping the presuure on the French.

The French infantry have been broken by musket fire.  Their cavalry has survived a British cavalry attack, but with significant losses.

The French cavalry have been broken by the English horse.  The Grenadiers are still holding off the militia on the left.  British infantry is advancing on the right of the farm.
In the next turn the 2 Continental regular batalions in the centre are broken by British musketry & the Continental army breaks.

Tonight we tried out a couple of rule changes born out of last week's post battle discussion.  They worked very well with no new issues arising.  I think Musket Action is now past the play testing stage.

This will be the last Camp Cromwell battle for while as Chris & I are about to go bush for a week before invading India with Renfrey & PeterW.  But there should be reports on the battlefields of the Indian mutiny & Sikh Wars on the blog during March & normal service resuming in April.

Posted by Jim Gandy at Wednesday, February 19, 2020 No comments:

Wars of the Roses at Black Hills

The initial set up from the York side.

The Lancastrian right broke before their flank attack hit home.  The Yorkist counterattack has hit the flank of the Lancastrian attack.  Next turn the advanced Lancastrian battle broke giving the Yorkists victory.

Posted by Jim Gandy at Wednesday, February 19, 2020 No comments:

We had a different cast of players to last week so we took the easy way of genrating a scenario & re-played last week's battle, again using our developing Musket Action rules. 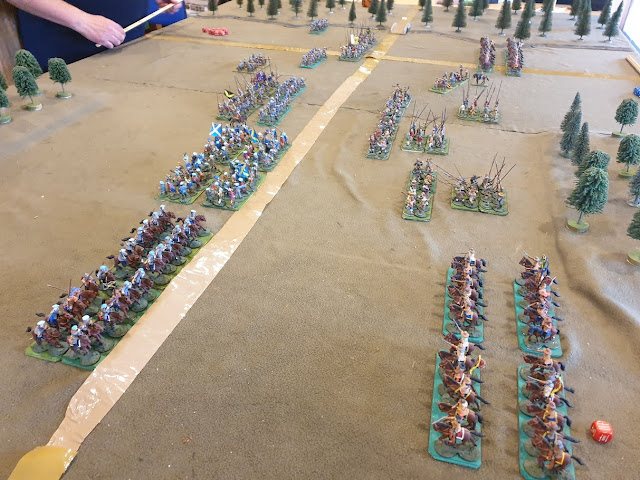 Mark, Mike & Jim have the Scots on the left, advancing all along the front.
Chris & Renfrey have the New Model Army on the right, advancing only their centre, & that not far. 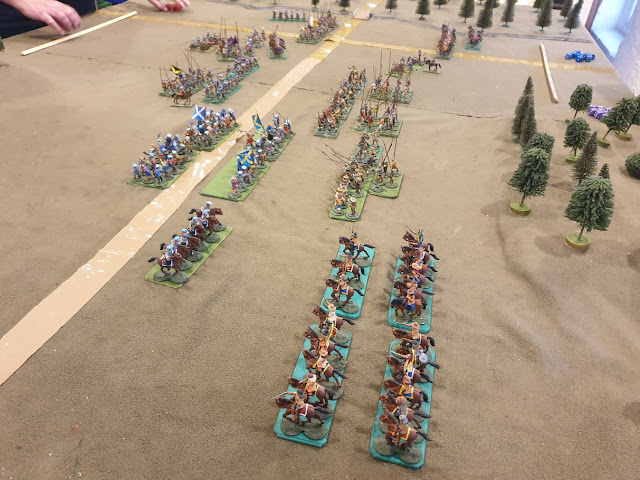 The Scots cavalry tried to take on the English medium cavalry, but were decimated in a shower of hot English dice. The first wave of highlanders also met hot English dice & bounced off.   There si some cautious sparing in the centre.   Some Scots muskteers advanced in skirmish order to neutralise the English artillery, but have been chased back by New Model cavalry.  On teh far flank Scotis shiltons & New Model cavalry are happy to keep at a safe distance. 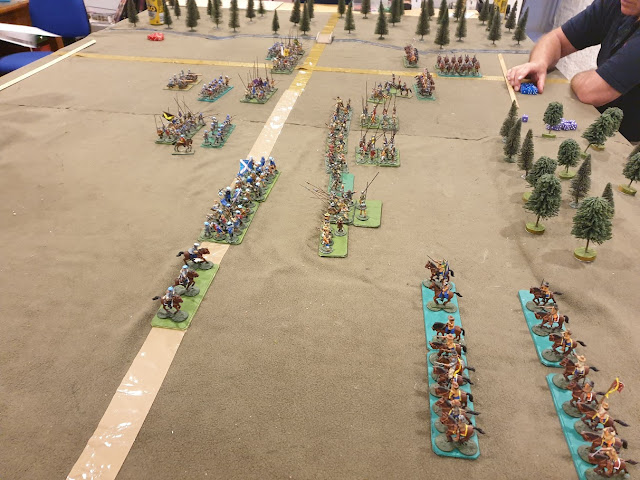 The English cavalry on the near flank have declined to advance.  The Highlanders front line has been finished off by English musketry.  There is a musket exchange in the centre.   Half the New Model cavalry is now heading across the English rear. 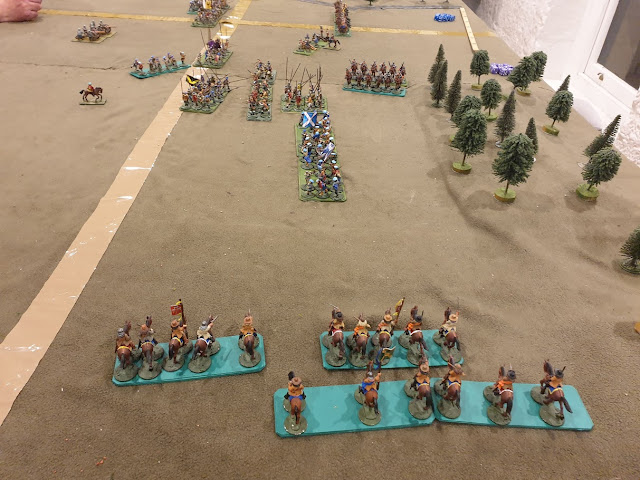 The second wave of highlanders has extracted revenge by breaking the English foot, but being impetuous they have charged on & exposed their flank to the English cavalry.  In the centre the Scots pikemen have finally found some good dice & have broken some more of the New Model foot. 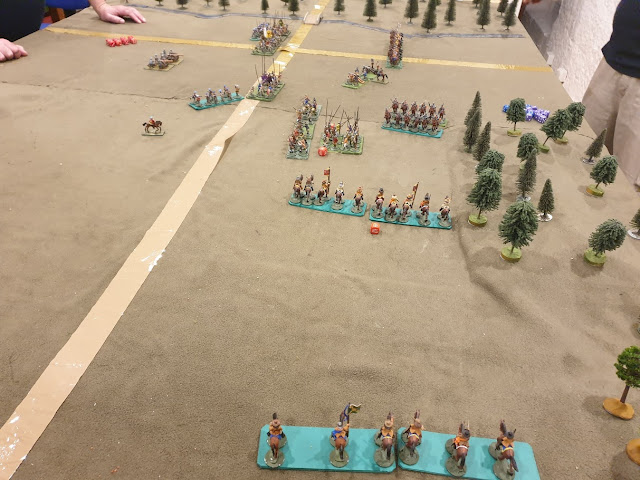 The English cavalry has ridden down the highlanders while the Scots' attack in the centre has run out of steam.  The Scots have failed their army break test.  So the same result as last time - quality beating quantity.

This battle was characterised by a lot of really wild handfuls of dice, mostly favouring the New Model, which made it hard to judge if the tweaks from last time were working.  But from the after -battle discussion I think we have already developed a good fast moving & entertaining game system, & have identified a couple of points with scope for further refinement.
Posted by Jim Gandy at Wednesday, February 12, 2020 No comments:

The New Model Army is on the left: 3 pike & shot regiments, 2 cavalry brigades & 2 guns.  All troops are well trained & the army has superior command.
The Scotts have 4 pike shiltrons, 4 musketeer units, 4 Highland bands,4 cavalry & 2 guns. All are regular troops with standard command except the Highlanders which have poor command unless being ordered to charge, then superior.

The New Model has advanced their cavalry against the highlanders on the near flank.  In the centre the Covenanter regular infantry has advanced with shot in front of the pikes.  Cavalry have charged the musketeers with mixed success.

On the near flank the highlanders saw the cavalry off, but with heavy losses.  The Scots have moved cavalry across their rear to support the highlanders (seeing no value in attacking the New Model hedgehog in front of them).  There an exchange of fire in the centre.

The English have also reinforced their cavalry on the near flank while their musketeers arer whittling away the Scott's centre.

The Scotts make a desperate attempt to counterattack the New Model horse on the near flank.  They some gains, but don't break thru.  Meanwhile English muskets & guns continue to maul their centre.

The Scottish shiltons try a last desperate attack right of centre.  They break the musketeerrs, but are in turn broken by the New Model pikes counterattack giving the New Model army victory.

The latest tweeks continued to improve the rules.  The only issue arising was making sure the cavalry v. infantry balance is correct right across all eras.  (Some inf v. cav clashes didn't go quite the way we expected, but this may have been dice variance not imbalance in the rules).

No Camp Cromwell this coming Tuesday as I am going bush.