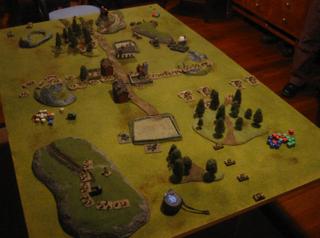 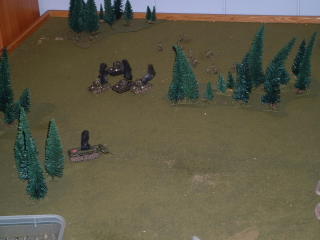 On a fairly open desert table, Jim's Bersaglieri defended. The Bersaglieri were swamped by the Polish armour before the heavy cavalry could arrive.
That was over so fast we did it again. This time Jim took a Carri Coy and attacked.
Again it was all over in the first turn as the Lancier 90's & Semo 75s plus a rush of M14's took out most of the Polish armour on the first turn.
The cauldron scenario really is very difficult to defend against armour unless you have close terrain & lots of a/tank.

Anders' Fallschirmjager v. Steve's US Motorised in a Free for All

Steve's experience was too much for Anders. I'm sure the lack of paint on Ander's troops didn't help either.
Posted by Nick at Saturday, September 24, 2005 1 comment:

another group of wargamers

Found another group of wargamers that play in Tasmania. Added a link to the Launceston Gaming Club in the links section.
Posted by Nick at Wednesday, September 21, 2005 No comments: 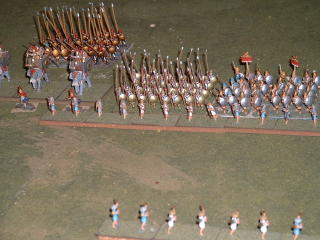 A major win to Chris.
Posted by Nick at Tuesday, September 20, 2005 No comments: 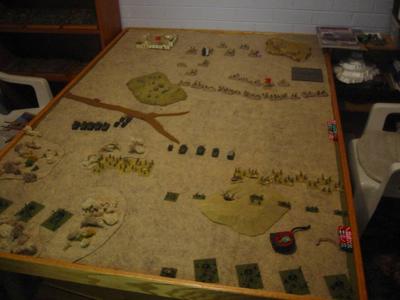 At Fort Floriet on Tuesday

Chris was away on an intelligence mission to New Zealand.

The dice decreed a Hold the Line. Nick chose to attack.

The US advanced their recon, 2 inf plats plus 57mm a/t, under a barrage of 2 105 batteries & a big mortar plat. Their armour was 5 M5 Stuarts & they had limited air support.

For the first few turns most of the luck was Italian. They won the artillery duel reducing both 105 batteries to 1 gun (1 battery v. 2, but it was dug in vets v. trained in the open). The USAF didn't show. The 47s & AA decimated the US a/t and stopped the infantry. The Stuarts got bogged down in the waddy.

On the other hand, the US did survive the Semo 90 ambush pretty well (1 Stuart only killed), they took out the 47mm guns, and their scouts made a secure foothold on the rocky hill just over the centreline.

Then things changed around for a while. The USAF came several turns in row causing significant damage & much disruption. The Stuarts finally got out of the wadi & wiped the Semo 90s. The 3rd Fucileri, sent to clean the recon off the hill, got pinned down by mortar fire & wouldn't unpin.
But the Italians were too far in front to lose, the Semo 47s finished off the Stuarts, the 100s knackered the US mortars and the 3rd Fucileri finally got going and cleared the hill to win the game (no US left over the centreline). A 4:3 win as the Ities lost their Semo 90s & 47/32 guns.

It was long battle (over 4 hours) with both sides having lots of artillery & tending to stand off and blast away. Nick was pleased to get some bad dice out of the way before the tournament. My new Sevo 90s look great, but they badly need target practice.

Nick's version is below 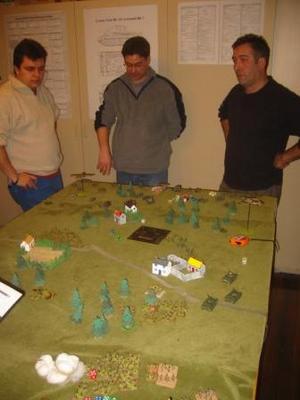 The Ities drew first blood by blowing the Brat infantry away in it's trucks, but 7 Sherman III's, 1 Grant, 4 Honeys & 3 Bugs with air support were going to take some stopping, especially when no reserves showed up until turn 4.

The Honey attack on the front line infantry was stopped by the 47's but the Shermans ground down the supporting 100 hows & the Lancias before finishing off the defenders of the front objective.

The Semo 75's arrived in the nick of time to contest the objective, but could only manage bails before being wiped by the Shermans.

Meanwhile the Bugs had made a raid on the rear objective drawing off valuable reinforcements. But the destruction of the bugs put the Brits below half strength and they had to survive one company morale test before they won the game by holding the objective - Muriusz threw a 5 for his first win here.

Your reporter was rather occupied elsewhere, but the general impression was that the Sturmoviks just kept on coming while the Luftwaffe just didn't. The Russians held the Germans off then counterattacked, eventually winning a long slog by driving off the only platoon over the centreline. Steve MkII's first win.
Posted by Nick at Friday, September 16, 2005 No comments: 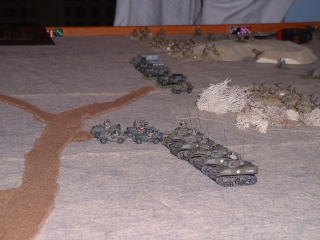 We did a hold the line. The Italians chose that the defender would defend the mountain. The US chose to attack, as they had a lot of artillery (a bad decision).

The US started off bombarding the front line Italian infantry. They couldn't range in on the Italian artillery, as the artillery were concealed gone to ground veterans at long range. The recon and Stuarts raced foward to get over the 1/2 way mark, while the infantry sedately marched up.

The Italians immediately shot back with their artillery and ranged in on the US artillery. Over the course of the next few turns the veteran italian artillery demolished twice their number (and points) of US guns.

On one flank of the table a duel erupted between Semovente 90mm guns that came out of ambush and the Stuarts. The Stuarts eventually won, using a wadi to hide in until they got close, then springing out and destroying the Semo's. Some Semovente 47s came over and duelled with the Stuarts. it could have gone either way -- at one point 3 of the 4 Semo's were bailed out. But the Semo's eventually prevailed.

With no artillery and no tanks, the US infantry was not up to the task of taking on hordes of Italian infantry -- eventually the US recon were assaulted and destroyed, and the US broke off. But not before destroying the Italian Semovente 90mm and 47mm AT guns, and severely damaging the Italian mortars, artillery, and two infantry platoons.

In the end Jim won because:

Jim's Fucilieri v. Marusz's British (Free Polish) Armour in a Free for All

A 6x4 table with a fair bit of terrain.

The Brat Shermans advanced on their left. The Honeys on the right moved accross the rear to support the attack. 17pdrs defended the rhs objective, infantry defended the lhs one.

The Brats had sporadic air. It came 1st turn with 3 planes, but the AA drove them off.

The armour attack had the Ities very worried. It took out the 105s with the loss of 2 Shermans and then destroyed the infantry in front of the objective. This left just the command and the AA to deal with 6 Shermans.

The Itie response was to attack on the other flank. This caused the Honeys to be recalled. They stopped the attack, but it had acheived the required result in drawing the Honeys away from the decisive front.

The Lancias then proceeded to win the battle for Italy. 4 Shermans gained the objective only to be blown off it by the Lancias. The RAF came again (another 3) and were again driven off by AA. The last 2 Shermans took advantage of the fact that the AA couldn't fire next turn to make a rush at the Lancias. They got only one & the survivor blew them away - game over.

An exciting and close game. It was my first go with the 105s & Lancias. I love them already.

Despite the RAFs pathetic performance and some heavy early losses, Barrie managed to Hold the Line.

Great trip. Would someone please paint some Japs so I can drive them back onto the sea again.
Posted by Nick at Friday, September 09, 2005 No comments: