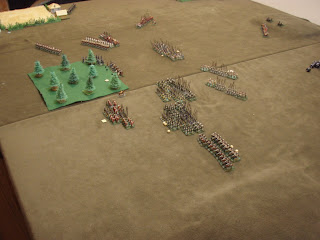 Barrie advanced most of his cavalry on his left, holding back the rest of the line - artillery in front of a wood left of centre with musketeers in support with artillery in front of the wood, P&S right of them, 1 cavalry unit then dragoons on a hill on the right. Steve advanced with his Medium cavalry on his right to meet Barrie's advance, then followed up with a general advance. Steve got the best of the cavalry fight on his right with a bit of help from some infantry. He lost 1 unit while routing 4. On the other flank the Royalists also won - the Heavy cavaliers riding down the dragoons & cavalry.

At this stage it looked pretty hopeless for Parliament, their cavalry was all but destroyed & a distressing amount of rallying was going on amongst the victorious cavaliers. But the Parliament foot finally stirred into action, counterattacked the foot to their front & quickly routed them while a cavalier charge on the musketeers in the wood was repulsed. The Royalist recruits drove the Parliament gunners away, but with close to high casualties they then dove into the wood to hide from serious opposition. Suddenly both sides were close to army morale failure - next loss would loss the battle.

Returning cavaliers aiming to charge rallying foot in rear were intercepted by Barrie's reserve foot. These slugged it out indecisively while both sides tried to reinforce. Barrie failed to activate orders for rallied infantry to join in while more rallied cavaliers came up. They made a decisive difference to win the combat and with it the battle.

The pic is taken from behind the Parliament's right. The parliament infantry's counterattack is underway. 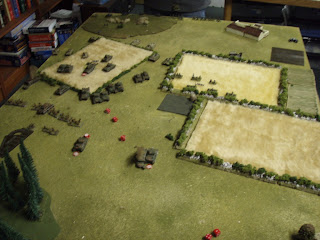 Tony deployed infantry & artillery with Pak 38's in ambush with more infantry, Stugs & Marders in reserve. The terrain favoured the defence with lots of hedged fields, but Tony erred in putting his infantry in the centre in front of the rear objective rather than right on the forward objective & relying on the ambush & HQ to defend the forward objective.
The Brits advanced with a wall of armour followed up with infantry. The ambush of Pak 38's did little to stop the swarm & they were quickly over-run. The Brits took the forward objective on turn 3.
The Germans were fortunate with their reserves and got both their armour platoons on turn 2, but they had to rush them forward to dispute the objective - halving their fire as they had to keep moving. The Brit's main problem was finding lines of sight past their own tanks in the crowded area between the hedges & while the Stugs made a brave fight of it, they were so outnumbered they couldn't last. The German infantry was mown down as it advanced & the Germans failed morale at the same time as the Brits gained undisputed control of the objective.
Posted by Jim Gandy at Sunday, March 29, 2009 No comments: 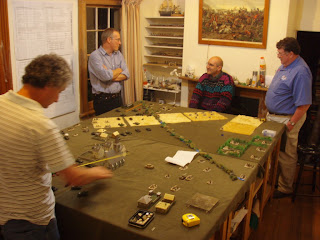 The battle started quietly as both sides dug in their initial forces on the objectives. The Germans pushed some infantry forward through the cornfields on the right while the Brits sent their large command platoon forward behind some hills on their right. The 3 tigers sat in open ground left of centre carefull to stay back from the 17pdr anti-tank guns.
But the reserves dice were not kind to the Germans. By turn 3 the Brits had all their reserves on the table while the Germans had none. Covered by a wall of smoke a swarm of Cromwells & Fireflies rushed forward. 2 Tigers were popped by Fireflies & the other failed morale. Ther German reserves came on piecemeal - first Stugs, then Marders, but they were no match for the massed Cromwells without the Tigers to help. The Paks 40s got a few but there was no way the 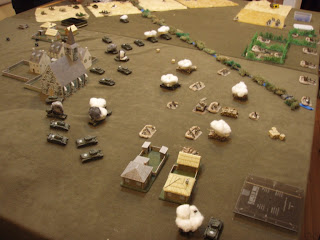 Germans could stop the rush on their left.
But the Germans were not devoid of a plan - infantry had been moved up into a position to attack on their right & was waiting for reserves to arrive. Now with the situation on the left getting out of hand they couldn't wait for the support infantry & mortars - so the infantry charged out of the the cornfield in a desperate bid to pull the battle out of the fire. But their artillery support failed to pin their opponants & they were mown down.
Next turn the Cromwells took their objective to win the battle.

The Encounter Mission can be a chancy thing - in this case the difference between arrival times of reserves made things very hard for the Germans against opponants who seized the opportunity given to them & exploited it to the max.
Posted by Jim Gandy at Thursday, March 26, 2009 No comments: 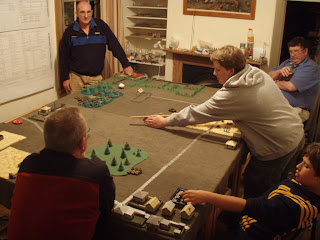 The Poms won the roll to determine the Attacker & chose to attack from the north side. The Poms put their 2 Rifles on the objectives & the Sextons on the right flank. The Germans put Grenadiers on the centre objective, artillery on their right & their Tigers in the killing ground in the centre. 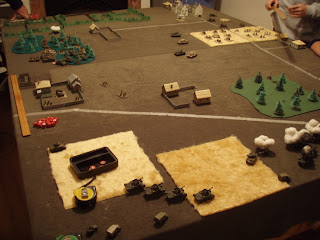 The Brits tried a dash down their right flank with the Sextons & a Tank platoon, but the Pak 40s, Marders & a Grenadier platoon arrived at the right place and time to meet them. The Germans also supported the flank with artillery & the Tigers taking long shots from the centre while the Brits sent their Honeys over to help out. The Germans lost the Paks & the Infantry, but the Marders (shuffled to perfection) lead a charmed life & in the end were the only survivors of the bloodbath.

The main British force lurked behind the woods in their centre waiting for an opportunity to pounce on any German mistakes. But the Germans just didn't make any. The Tigers occupied their killing ground in the empty centre turning this way & that to counter every British move. They helped out against the flank attack on their left, they turned right to prevent a British thrust down the other flank, then returned to help the left again and all the while they steadly crept forward towards the objective. The Brits could find no better strategy than to have their Fireflies taking long range potshots from cover with semi 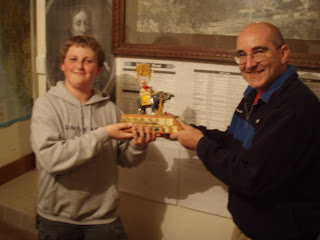 indirect fire, but the Tiger's tough hides saved them & the with the odd 6 they picked off the Fireflys.

When the British rifles on the objective were dropped below 1/2 by Tiger potshots & the Marders popped the Honeys, the Brits failed Coy morale.

The Brits regretted not taking either Air or M10's - they just lacked firepower against the Tigers. Their flank attack was skillfully countered and they just could not find a way to win. The critical issue was that James used his Tigers with skill & patience to exploit his main weapon & the terrain to the maximum. It was some small consolation for the Brit commander to know that he had taught his enemy every dirty sneaky lowdown trick that was leading inexorbly to his own doom.

James' path to the Maharajah Trophy for 2008: 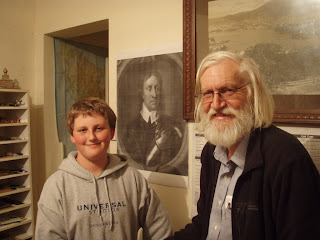 1. The Tigers move off.
2. The British flank attack is in the foreground. Tigers prowl in the centre & Cromwells cower behnd the woods.
3. The umpire presents the trophy to a very happy winner.
4. The loser congratulates his victorious apprentice in front of Cromwell himself.
Posted by Jim Gandy at Tuesday, March 10, 2009 No comments: 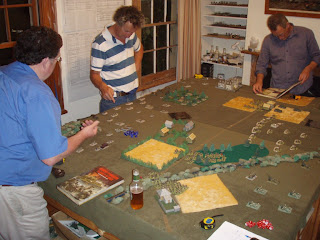 The Germans had 2 Inf with HMG, 1 Eng's, Pak 40's, 2x2 88's, SP Art, SPAA + Stugs. They deployed defensively & dug in with Infantry on each objective.
The Russians had 3 x 2 coy Strelk, HMGs, A/Tank, Hvy Mortars, Art & 3 JS2. They deployed the HMGs, A/tank & mortars to defend the objective in the centre, Strelk + JS's on the right, Art & 2 Strelk on the left. They immediately advanced on both flanks.

The Russian attack on the right came to a sticky end when the Art support got pinned & their target unpinned at the wrong time.
On their right the Strelk dug in in a cornfield short of their objective while their supporting JS's got destroyed by the Luftwaffe.
The Russians called off their attack on their left, withdrawing their surviving Strelk to defend their own objective near their guns.
The Germans patiently picked away at the Russian artillery with artillery & Luftwaffe while they slowly concentrated their strength on the right.
But when the Stugs moved over to their right, the Strelk in the cornfield suddenly rushed forward to the attack. They drove the German Infantry back, but were then pinned by artillery. Bad unpinning dice followed by lousy combat dice saw them lose their chance & the Germans just managed to hang on to the objective.

It was 11 by then & time to knock off. The Russian attacks had failed, but the Germans were still not threatening any objectives themselves. Given the Russian's greater losses the Germans would probably eventually prevail, but it would take a long time to prove it.

The pic is taken soon after the start - Ivans on the right.
Posted by Jim Gandy at Wednesday, March 04, 2009 No comments: