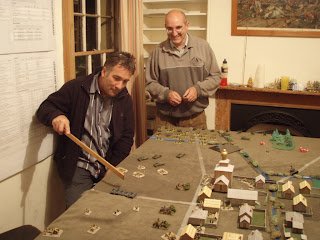 The Russians deployed the dreaded KVs on their left, the T34s on the right, the T70s in the centre right with Heavy Mortars, Mortars & Rockets supporting them from the rear.
The Axis deployed behind the river with the Italians on the left, Germans on the right and all the artillery in right rear.

The Russians advanced with their armour on both flanks. The KVs engaged in a pretty ineffective duel with the Axis artillery while the KVs & T70 mowed down the unfortunate Fucilieri before they could dig in. The first reinforcements to arrive were a Strelkovy Coy of a Milita Battalion on the Italian left flank. These finished off the remains of the Italian front line, but hesitated to advance in front of the German HMGs and they held back waitng for the T34s to clear the way.

More reinforcements soon arrived in the form of another Russian Militia behind their right flank and a Panzer Coy on the Axis right. 11 Panzer IVs (only 5 longs) put some pressure on the KVs with the support of plenty of smoke. The KVs fell back rather then risk being outflanked but the duel across the creek line was remarkably ineffective - the Russians couldn't hit & the Germans couldn't penetrate. 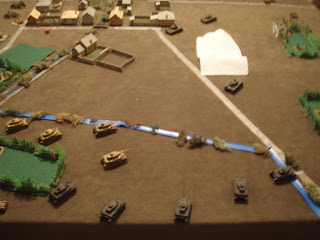 The Russians brought on and set up 2 Gods of War batteries. The T70s and some of the reinforcements rushed to their centre rear to protect the LOC from the Panzers. The T34s continued to advance over the Italian left flank. They also took out the German HMGs though the HQ's Panzerknackers took one with them.

The air forces as usual have scared the hell of the enemy periodically, but have actually acheived little.

We called a halt until next week at the end of turn 7. With 5 turns until nightfall, a decisive result looks unlikely, but the butcher's bill could be significant in the context of the campaign.
The 1st pic shows the Russians gloating shamelessly over their success on their right flank.
The 2nd shows the Panzers arriving & the KVs backpeddling under Axis smoke.
Posted by Jim Gandy at Wednesday, February 27, 2008 No comments: 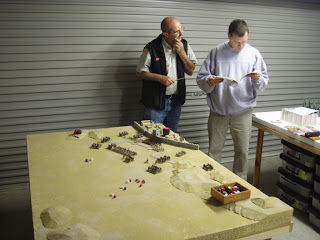 Scenario from 'Beyond the Golden Gate', a period book for Warhammer Ancient Battles.

Nick roped Craig in to play this scenario. Nick then 'generously' made Craig play Belisarius -- outnumbered but behind a ditch, and with a surprise flank attack.

Historical information on the battle is at http://en.wikipedia.org/wiki/Battle_of_Daraa
On the table, the Sassanids attacked. The Sassanid levy in the center had immense luck, and mowed down Roman levy with archery fire. The Roman levy eventually charged, only to continue to have bad luck with the dice and rout. On the Roman right the Persian elites charged, only to get bad dice and almost lose to some average Roman cavalry. But on the left the Sassanids saw off the Roman cavalry, and managed to rally and turn in time to see off the flank attack. With one Roman flank gone and their center routed the Romans conceded a victory to the Sassanids.

However, after the battle Nick realised that he had cheated his way to victory, giving his leaders abilities they werent entitled too. His generals had an extra attack dice they shouldnt have had. This could have been critical in some of the close combats.

Attached pic is Nick and Craig checking the rules. Battle is in the foreground. A Battle of the Bulge table is in the background.

The Russian Guards (Nick + SteveP) made a pinning attack on the 2nd Grenadiers (Jim & SteveJ) in I4.
The battle fizzled out as the Russians didn't have the guts to attack & the Germans were waiting for their Panzergrenadiers to arrive before counterattacking. There was a bit of an artillery duel that cost the Russians 1 heavy mortar & an Infantry & the Russians retired before the Panzers arrived.

After the battle we discussed the campaign rules re these minor battles and decided it would be better to change the rules so we didn't have to fight them. Pinning actions are an important part of the system as they mitigate against stacks on the middle, but they just aren't interesting enough to be worth the trouble of setting them up. We also discussed the option of coming up with rules to make these actions more interesting, but we were unable to come up with any good ideas.

There is a second pinning action in F5 where the Motostrelkovy are pinning the 2nd Panzer. It was agreed not to bother fighting it. 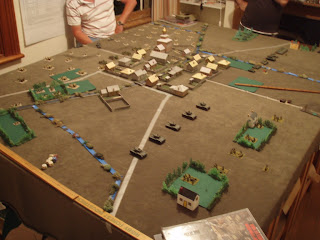 We deployed the troops for the Isdonisgrad II ready to start turn 1 next week.

The Fucilieri & Grenadiers are deployed behind the river. As the Axis only moved into the hex last turn, they are not dug in & it is an Encounter Battle. The Tankovy Battalion is lined up ready to attack. 2 Russian Militia Battalions are off table on the Axis left flank as Delayed Reserves. The 1st Panzer is off table on the Axis right flank as Delayed Reserves.
The pic is taken from behind the Russian left.
Posted by Jim Gandy at Tuesday, February 19, 2008 No comments:

The Axis again attacked Isdonisgrad with the Panzer grenadiers making a pinning attack on J5 to prevent the Tankovy & Guards moving to support the garrison. (Battle fought last week).

The Russians had 2 Militia & a Motostrelkovy to defend Isdonisgrad against Fucilieri & Grenadiers. But all the Russian Battalions were battle scared and they expected 2 Panzer Coys to come on in support. So the Russians funked it and fell back.

The Italians marched into Isdonisgrad unopposed.

The Russians are now counterattacking.
The Tankovy is attacking Isdonisgrad from the south, with the Militias ready to support them.
The Guards are attacking on their left flank, the Motostrelkovy on their right.
We have 3 battles to fight.
I4: Guards v. Grenadiers
Isdonisgrad: Tankovy v. Fucilieri + Grenadiers
F5: Motostrelkovy v. Panzers
Posted by Jim Gandy at Wednesday, February 13, 2008 No comments:

Marathon is a very simple battle without a lot of room for tactical finesse, but for that same reason a good training battle.
Both sides charged forward, but for the Persians at least there was some manoeuvre - they tried 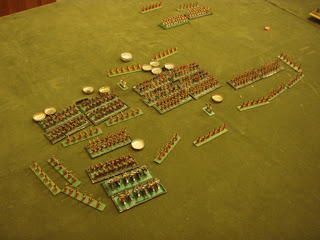 to weaken the Hoplites with their light infantry swarm before they reached the main line and also tried to do move their small cavalry force to make a rear attack.
The few Greek light infantry were quickly overwelmed, but the massed Persian bowmen were largely ineffective inflicting just one effective hit on the whole line before the melee started. The Greeks pushed the Persian main line back, but for a while it held.
The Persian Cavalry managed to get in rear, turn around and obey orders to return to charge the left rear of the Greek line just as their Immortals at the other end of the line broke. But the quality difference was so great that the Hopites survived the rear attack. The Persian centre then broke and it was all over.
Posted by Jim Gandy at Wednesday, February 13, 2008 No comments: 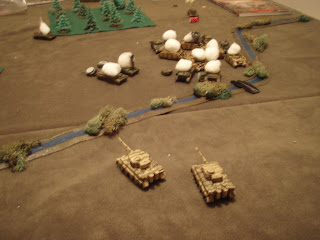 The Brits took out the MkIVs on the objective & the Germans halted their advance and turned the Stugs & Tigers back to protect the objective. Cromwell Platoon A took the objective and sat there amoung the burning MkIVs as the Stugs rushed up to dispute. Cromwell Platoon C was already destroyed, but Platoon B got behind the Stugs & did some damage before they got 88s up their clackers. Platoon A got another hit on the Stugs & they failed morale leaving the Brits with the objective. The Germans passed Coy Morale & the Tigers had one chance to drive the Croms off. They had 4 long range shots at vets concealed in the smoke of burning tanks - needed 6's to hit. They got 1, but then failed firepower on Johny Wilkinson's Firefly. The platoon remained 1 dead, two bailed, 1 ok - no test & a close game over.
Posted by Jim Gandy at Wednesday, February 13, 2008 No comments:

While last week's battle was being fought in J5 there was a simultaneous action in I4 where the Motostrelk Batt made a pinning attack to prevent the Axis from reinforcing J5. The rule is that to successfully pin you cannot retreat until turn 3, so the Moto Batt had to take 2 rounds of artillery & mortar fire and one round of tank fire before they could retire. The Russian artillery was pinned down from the start and did not reply. The Russians lost 1 gun & 6 infantry. The Germans lost nothing.

Having finished the last turn 4 action quickly we did the start of the turn 5 sequence. The Axis attacked Isdonisgrad again and also made a pinning attack on J5 with their Panzergrendadiers. Nick did not have his staff with him, & besides the decision on what to do in Isdonisgrad is too vital to rush, so we put that hex on ice for the moment. But we decided to fight the pinning action in J5 as we had the time available to do it.

The Germans here had more sting than the Moto in I4, but then the Russians had their two best Coys there so there was no way they could win. Steve did his cute Marder shuffle with the Marders & popped a KV. Jim tried the same with the SPAA v. the T70s but only got a bail. One Marder and 1 AA got destroyed but the rest got away. The Germans were content to trade them for a KV.

These little pinning actions are usually one sided, but they are a necessary part of the big picture and do have their moments. Losses in them are seldom decisive, but they do add up.

The Campaign is at a critical stage. The Axis are attacking Isdonisgrad with 2 Infantry Coys with possibly 2 Panzer Coys in support. The Russian defence has 2 Militia Battaions defending it with 1 Moto Battalion in support - all of them with significant casualties. Their best Battalions cannot be drawn in as support (being pinned at J5). They have the choice of fighting for it & relying on the terrain to hold the line, or conceding the prize hoping to take it back with a counterattack next turn. Big decision.
Posted by Jim Gandy at Tuesday, February 05, 2008 No comments: