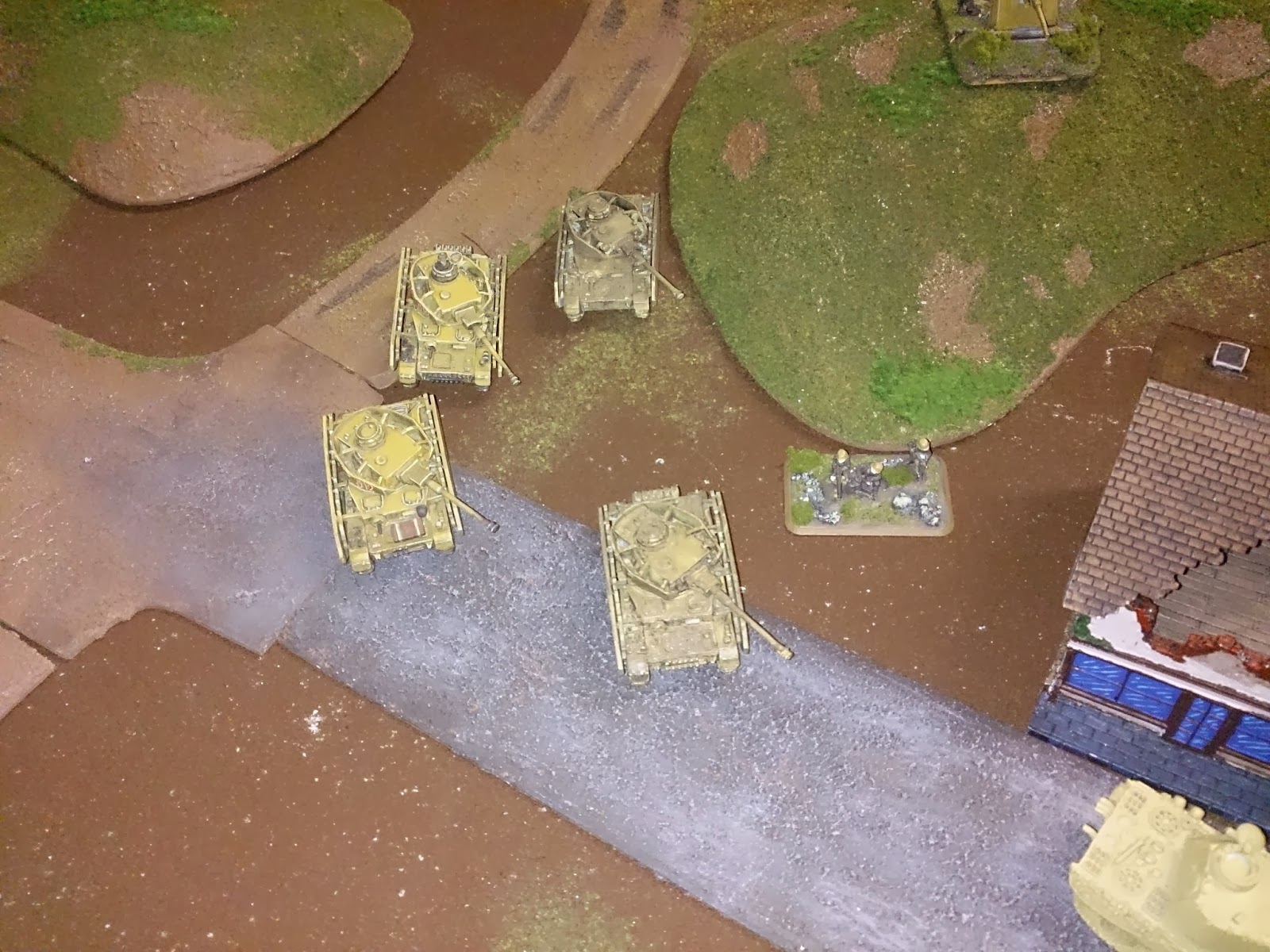 Following the success of the update of our Dreadnoughts rules we tried out last week, I moved on to update our Men o' War rules for naval warfare in the age of sail.  The changes are to generally simplify things to allow the data to be recorded on magnetic stands under the ship models & to use magnetic logs for orders. 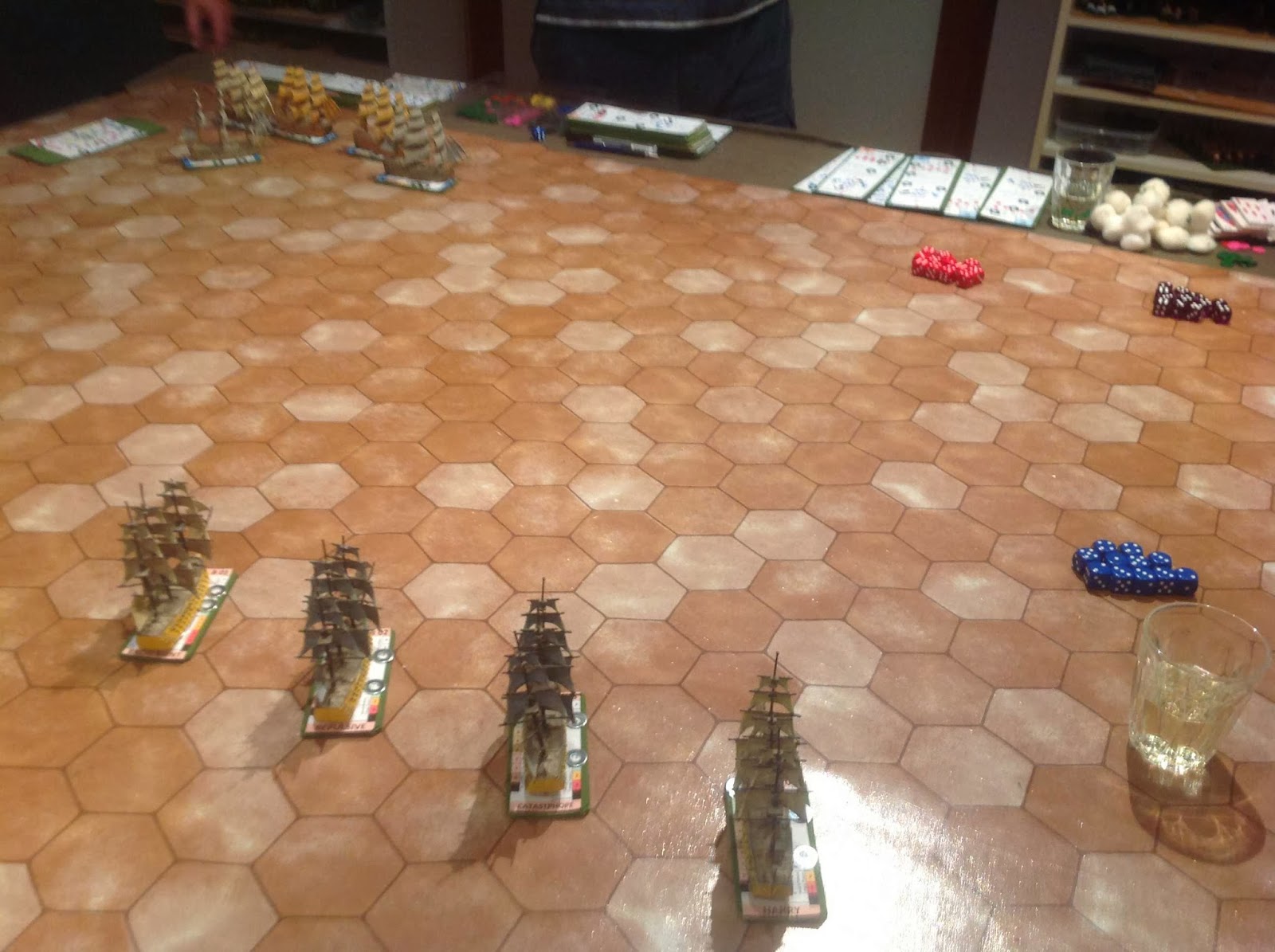 The starting positions of the fleets was determined by a Bolt Action dice roll determining a direction of approach for each fleet.  The wind is blowing straight down the table.  The British ships in the foreground comprise 1 1st rate & 3 3rd rates, all elite crews.  They started with the wind on their port beam, but have turned abreast towards the French & now have the wind on their port quarter.  The French fleet was sailing close hauled on the starboard tack, in 2 parallel columns,  but have turned to port and are trying to sort their line out.  the French have 1 1st rate & 4 3rd rates, all average crews. 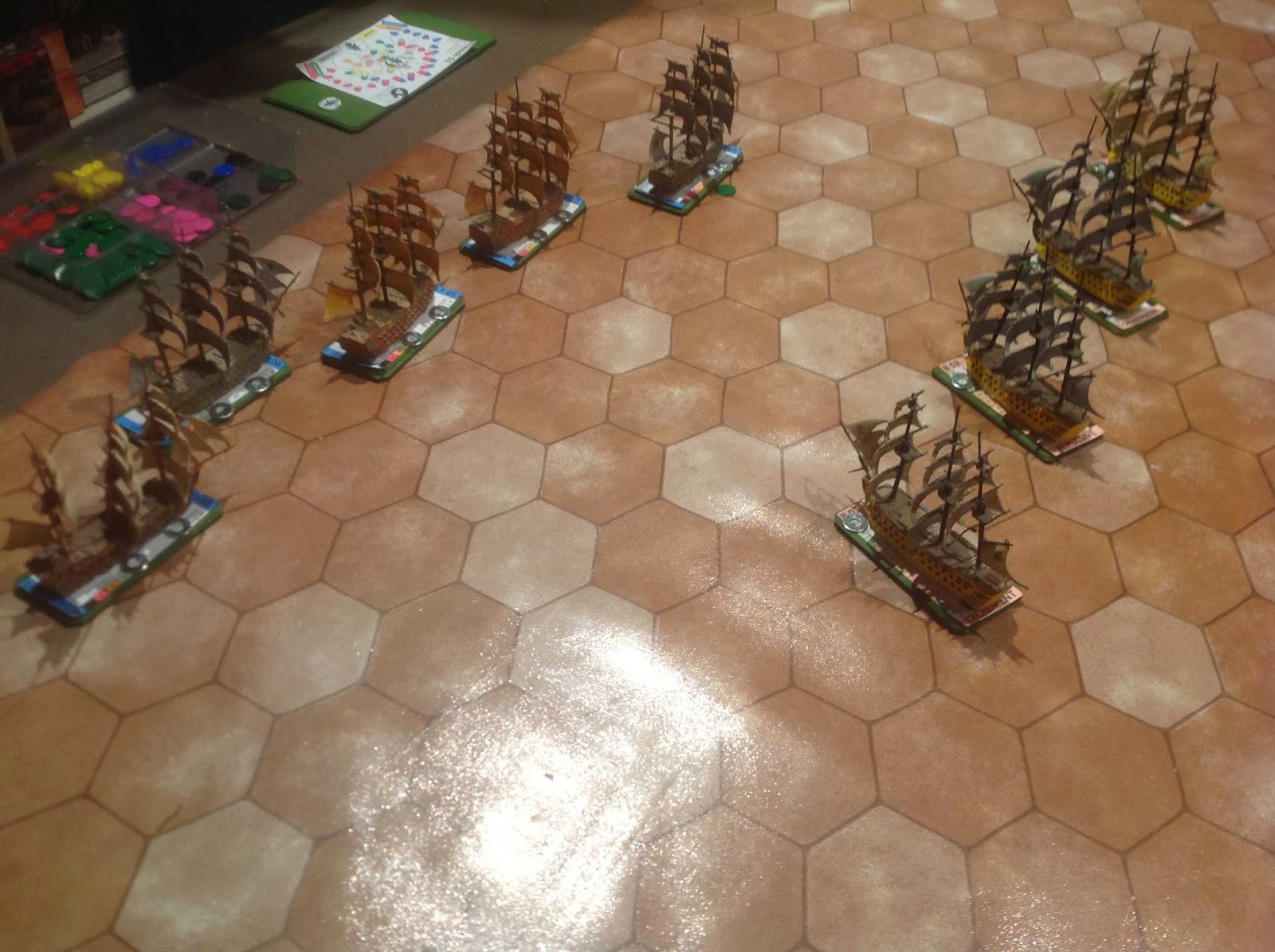 The British have turned to starboard as they approached the French line.   The French van has opened fire at long range, but has done little damage. 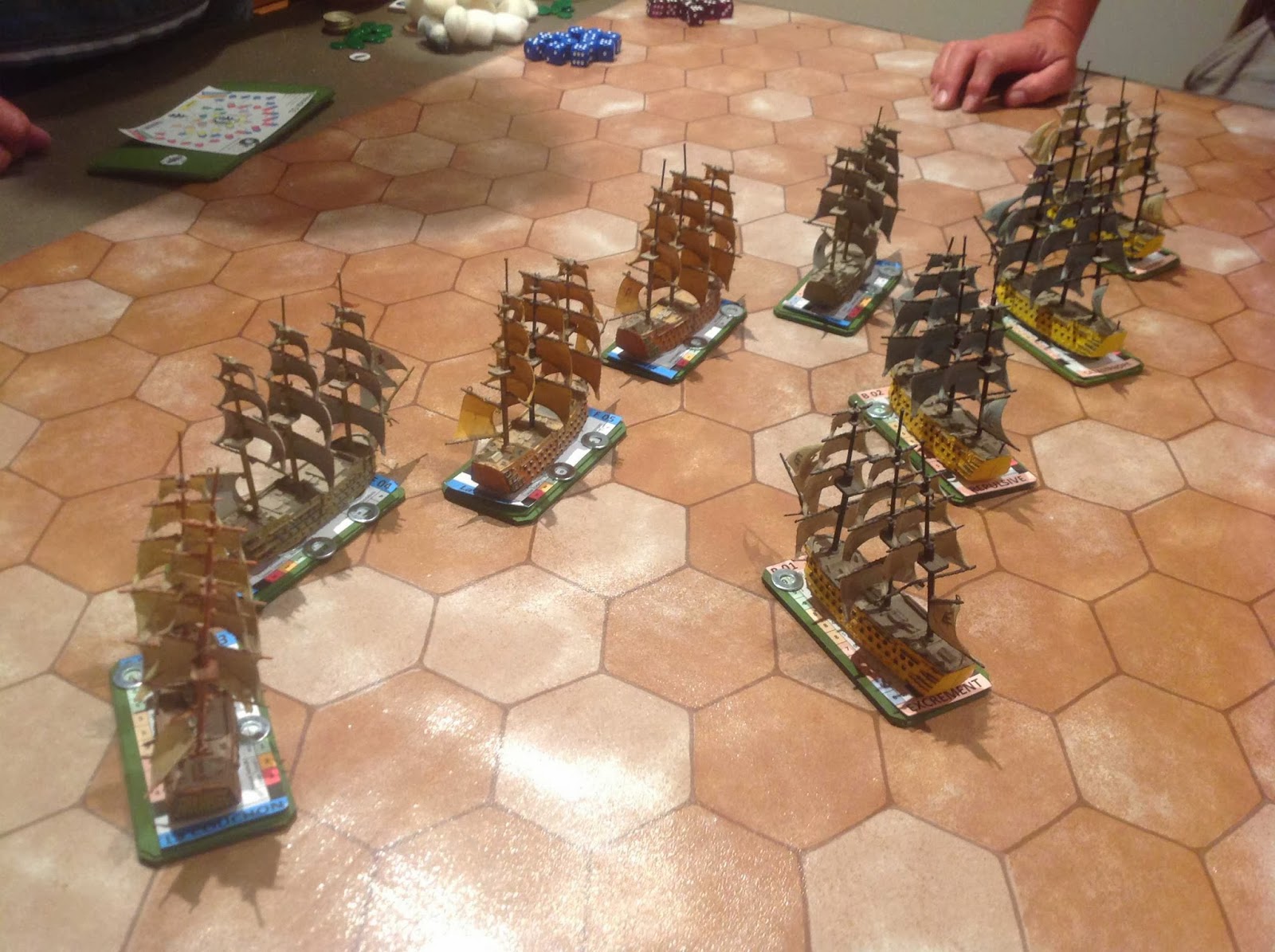 The ships close and their fire is now becoming effective.  The British flagship at this end of the line is about to cop the fire of 3 French ships. 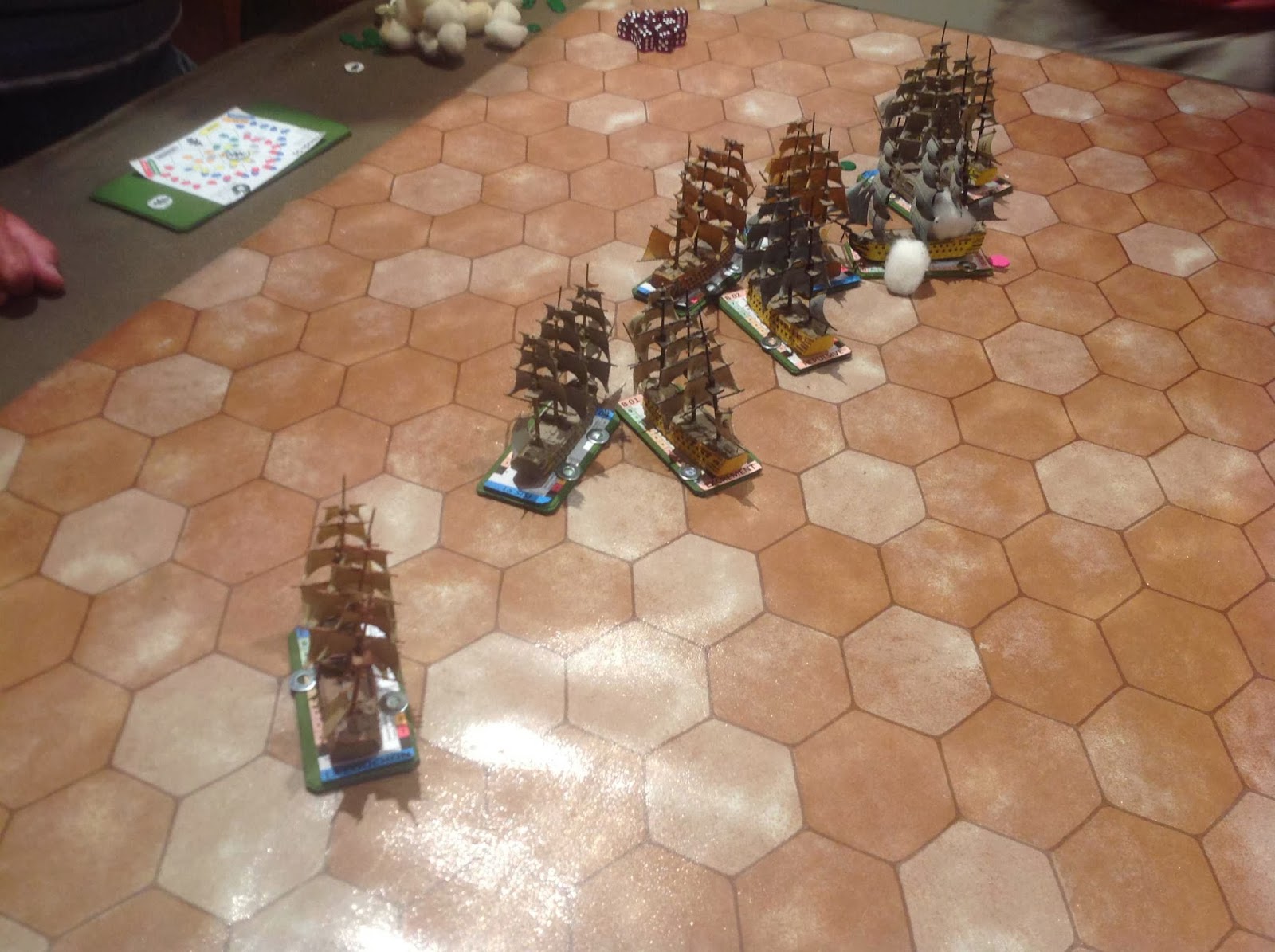 The British have tried to break through the French van, but the Frenchvan has turned away and have generally got in better broadsides.  One British ship is already critically damaged, is on fire, and has struck its colours. 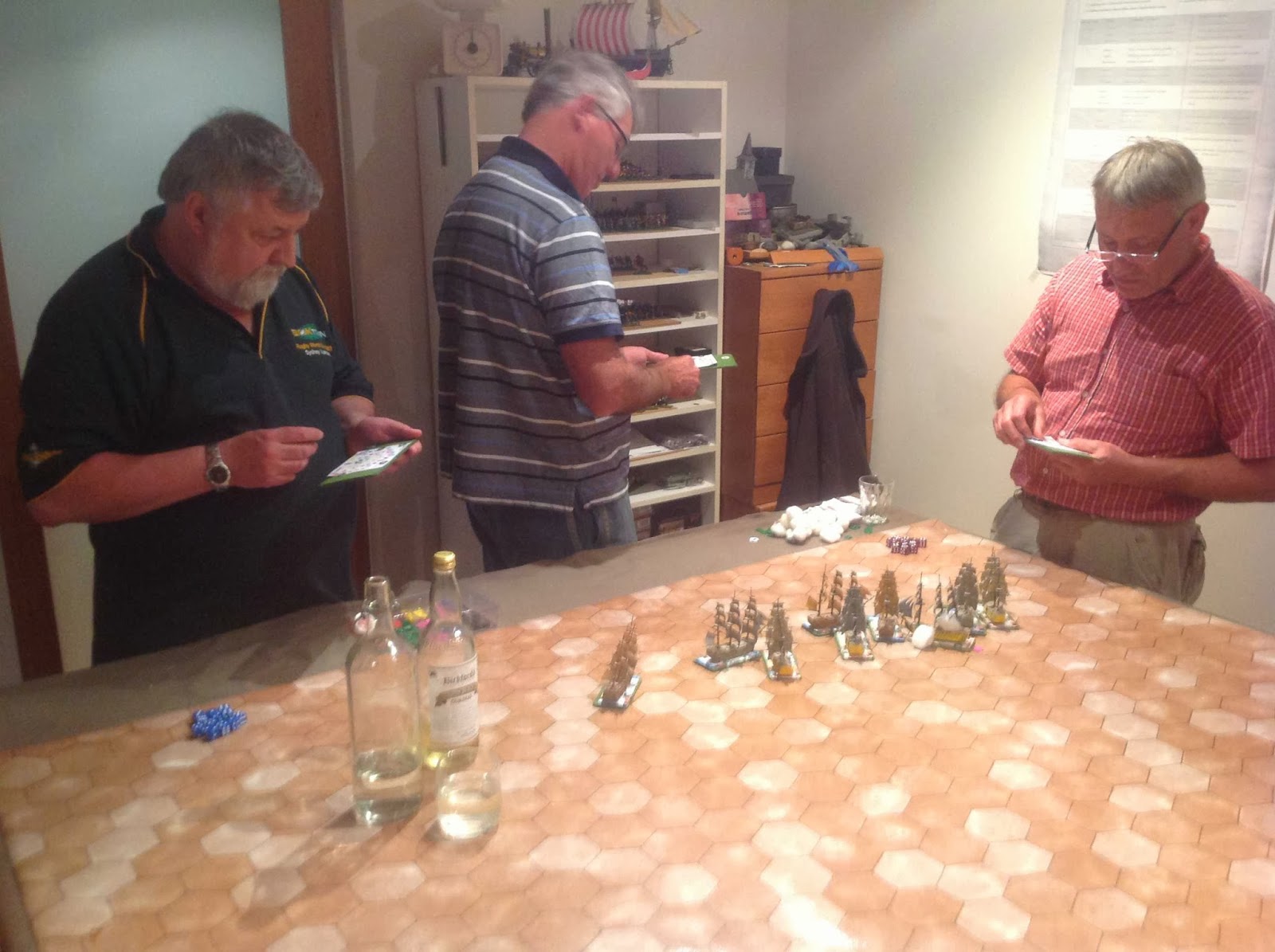 The admirals are deep in thought as they contemplate their orders.  All ships are given commands using magnetic boards with a small hex diagram that shows the legal moves depending on the angle of the wind to the ship.  The ships are then moved simultaneously so a lot of the skill in the game is predicting where the enemy will go & getting your ships better able to fire at them than they at you.  (Note that we are drinking lime juice to prevent scurvy). 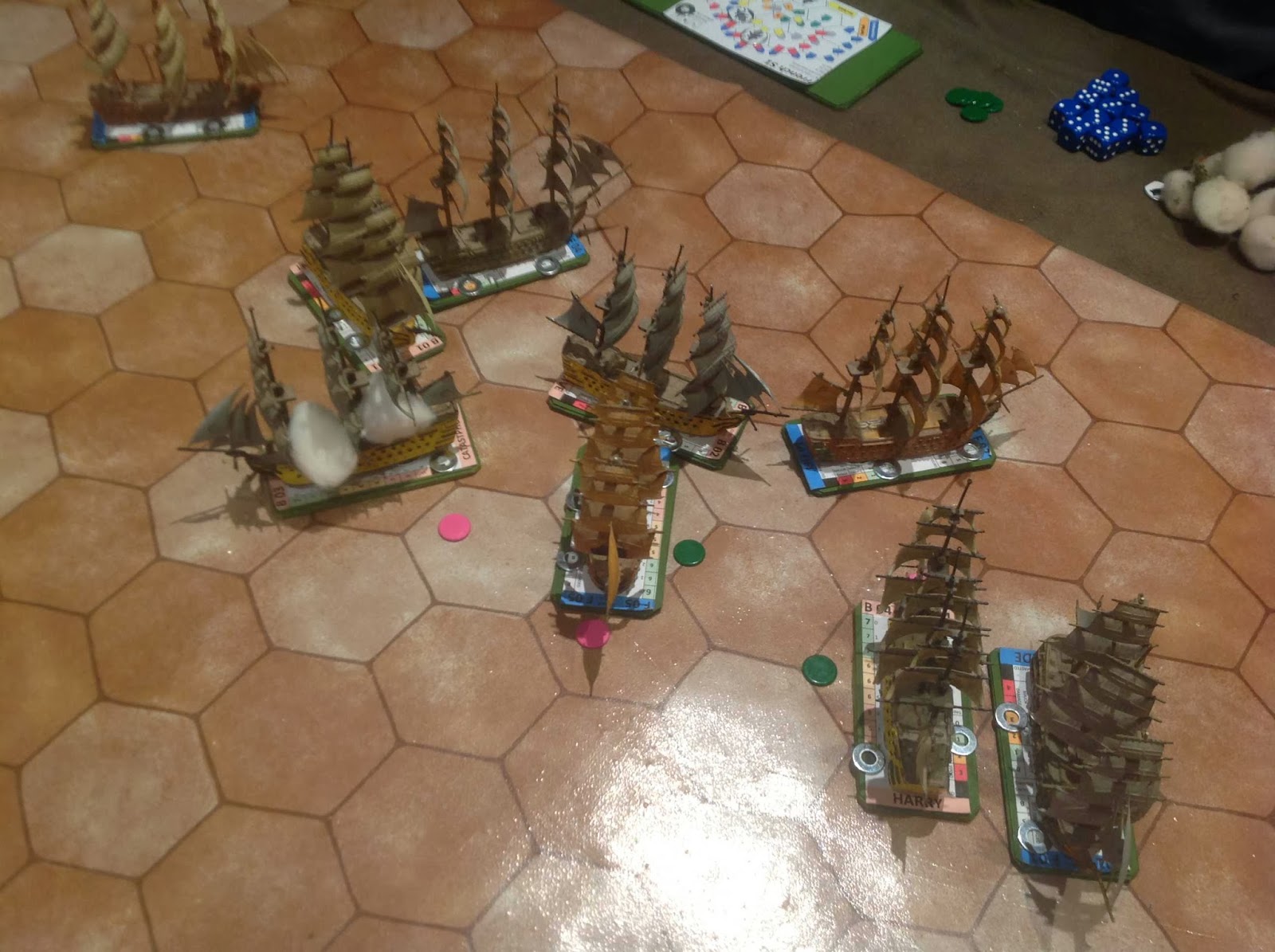 The French do better in their manoeuvres and pummel the British ships in close.  Two more Britsh ships are critically damaged and strike their colours.  One French ship is raked and also strikes, but there are still 4 French ships in action & only 1 British.  The remaining British ship runs for it as the French send out prize crews to the stuck British ships & their struck ship re-raises the tricolour.

All the players enjoyed the game - the revisions to the rules were generally successful, I saw a few points that could be further improved.  The battle was over in about 1 1/2 hours so there is certainly scope for bigger actions if we had the ships.  Our ships are 1:600 Airfix Victories. mostly over 40 years old (like the real thing at Trafalgar), though they are still making them exactly the same.  They look pretty good as generic ships of the line, though we do have some issues with them being bigger than our hex mat. 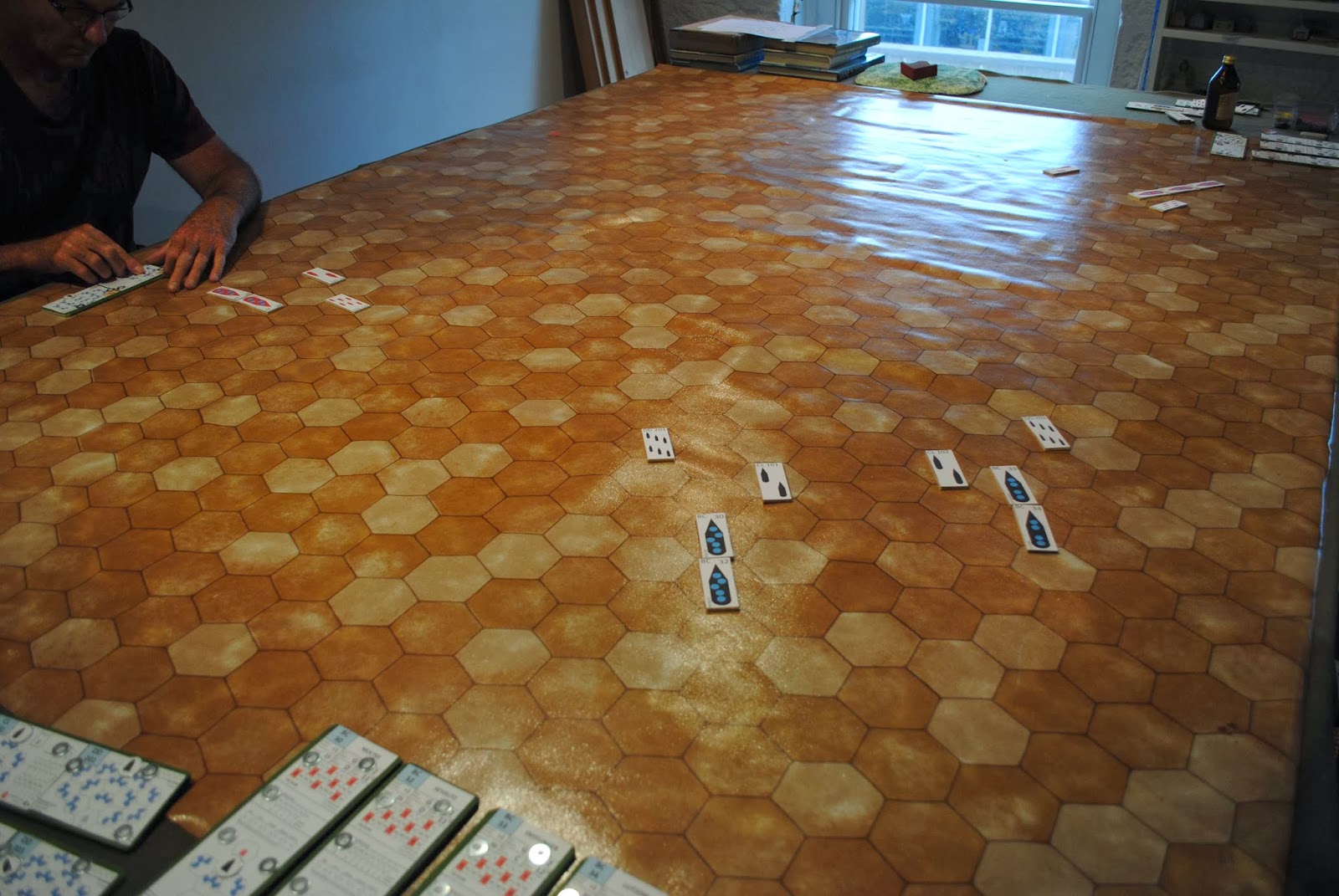 Mike's fleet is on the left, Renfrey's on the far right & the Germans in the foreground. 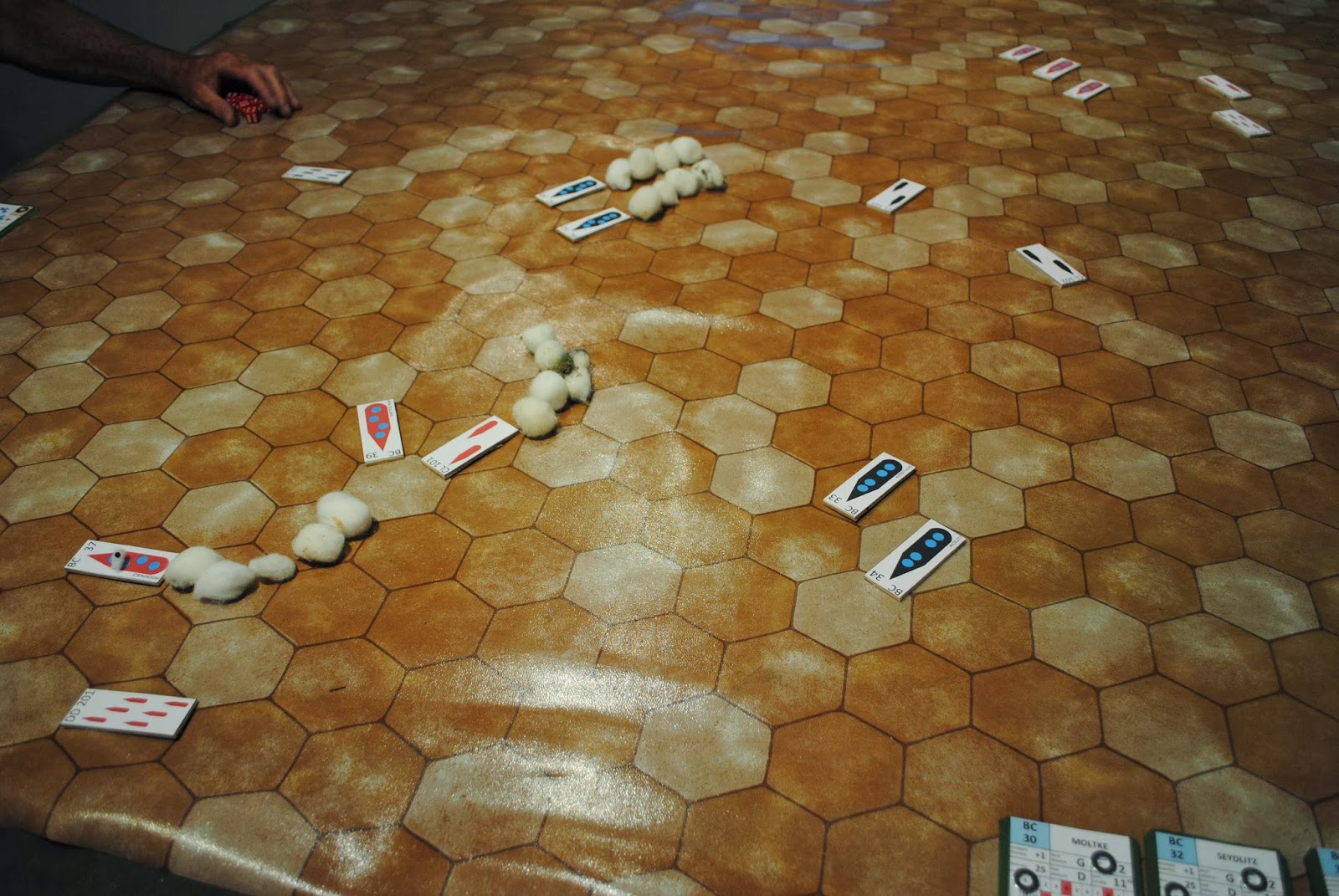 The Brits made a big error at the start when they allowed the Germans to get between the two British fleets and engage Mike's weaker BC's before Refrey's cats (Lion, Tiger & Princess Royal) could get up.  Moltke & Seylitz badly damaged New Zealand & Indominable.  They tried to escape in smoke as Defflinger & Lutzow closed in, but were caught in a pincer and soon sunk. 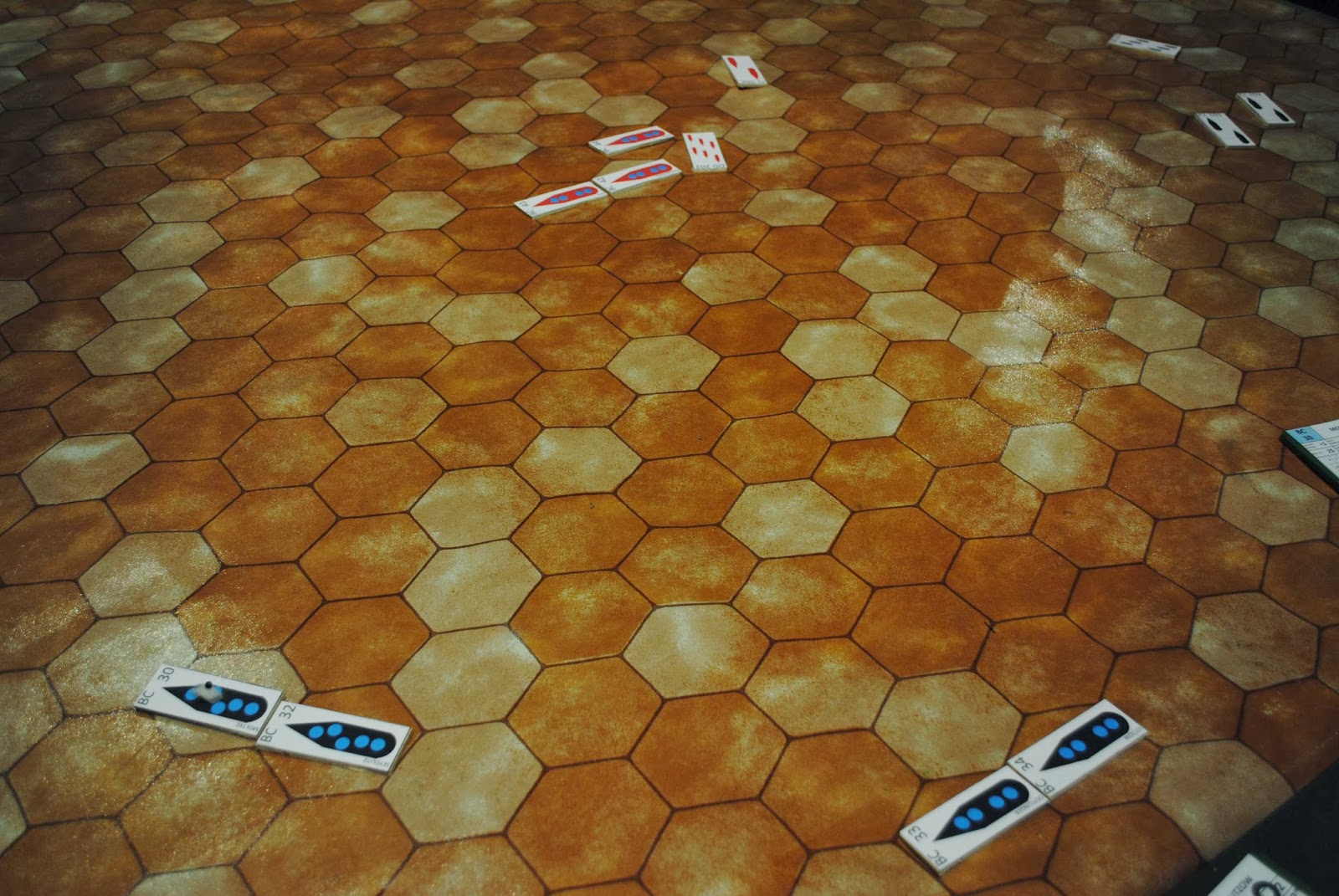 The Germans reformed to take on Renfrey's cats. 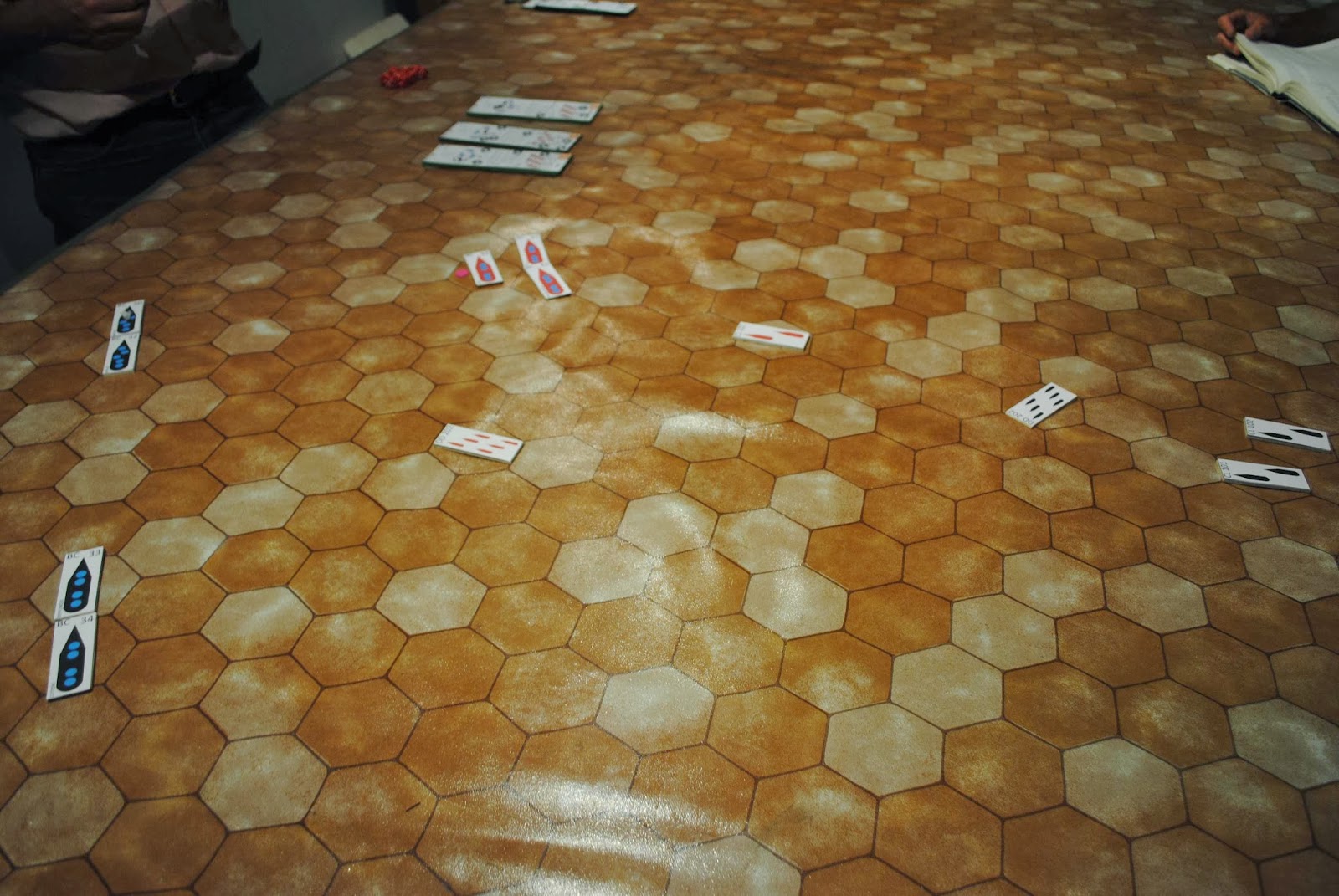 The Moltke & Seydlitz tried to cross Renfrey's T, but his ships were too fast and turned away to make a parallel line while the Defflinger & Lutzow were too far back to be much help.  The Germasn had mishandled their light ships & they were left out ont he right, too far away to stop the Brit DD's attacking the rear Germans ships. 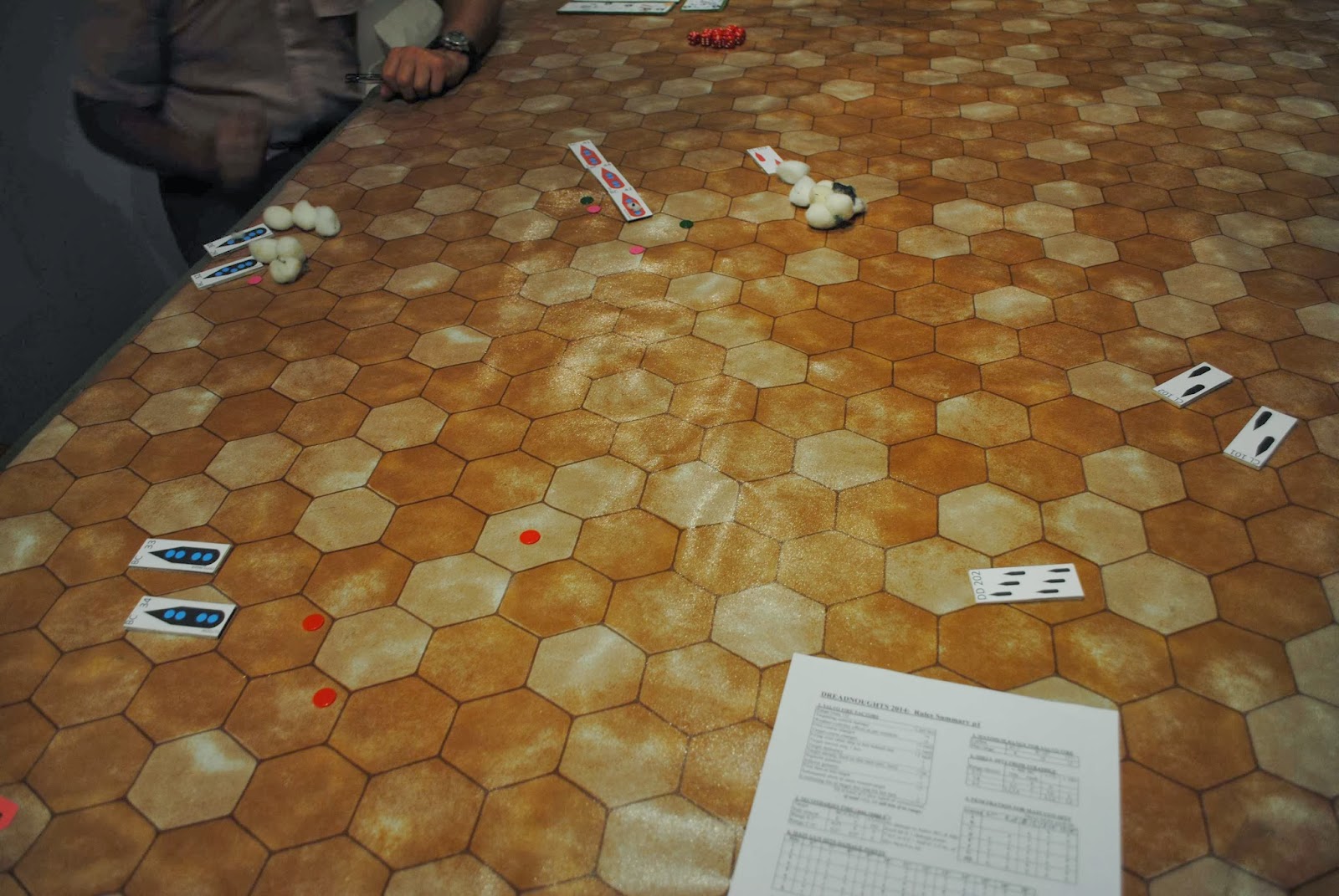 The Moltke & Seydlitz got the range on the Lion & Tiger, but the cats returned the favour & damage was mounting on both sides.  When the Defflinger & Lutzow turned away to avoid torpedoes the Moktke & Seydlitz also turned away into smoke rather than slog it out against the odds.

The British made a claim for victory on the grounds the Germans turned away, but they didn't hang about waiting for the Germans to regroup & come back for them with Defflinger & Lutzow in front and it's hard to spin the loss of two battlecruisers to nil.
Posted by Jim Gandy at Tuesday, February 11, 2014 No comments:

After a long hiatus I resurrected our old Dreadnought rules for early 20th century naval warfare (the rules were last updated in 2003).  The old ship models are in a box somewhere so I knocked up some new ones out of balsa & paper.  I also replaced our old paper record keeping with magnetic boards with sliding counters. 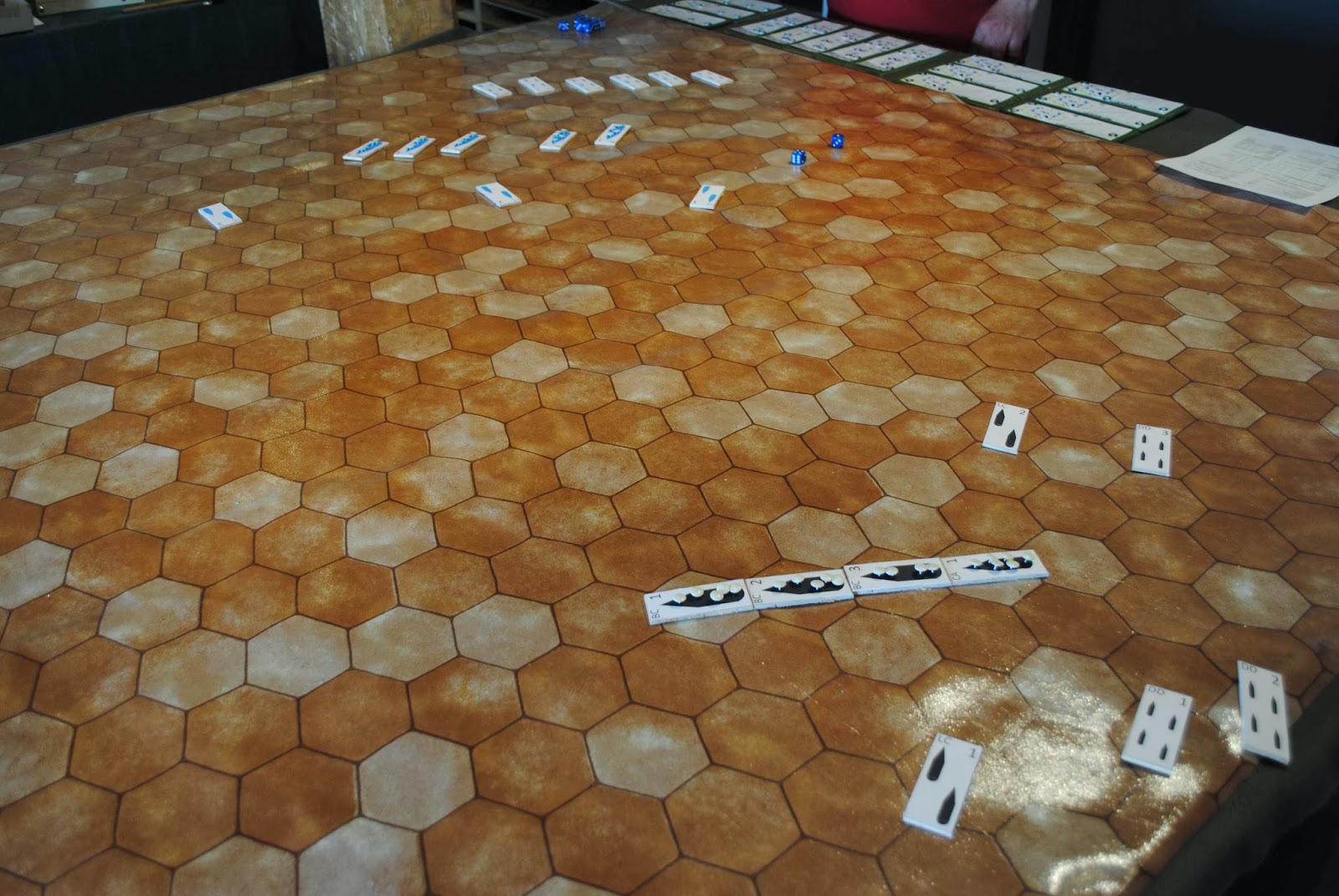 We started with an approximately historical deployment.  The Germans cruising along unaware that the Brits had cracked their code & knew where they were. The Brit fleet is on the far side with their DD's behind, delayed by rough seas coming up on the flank of the Germans. 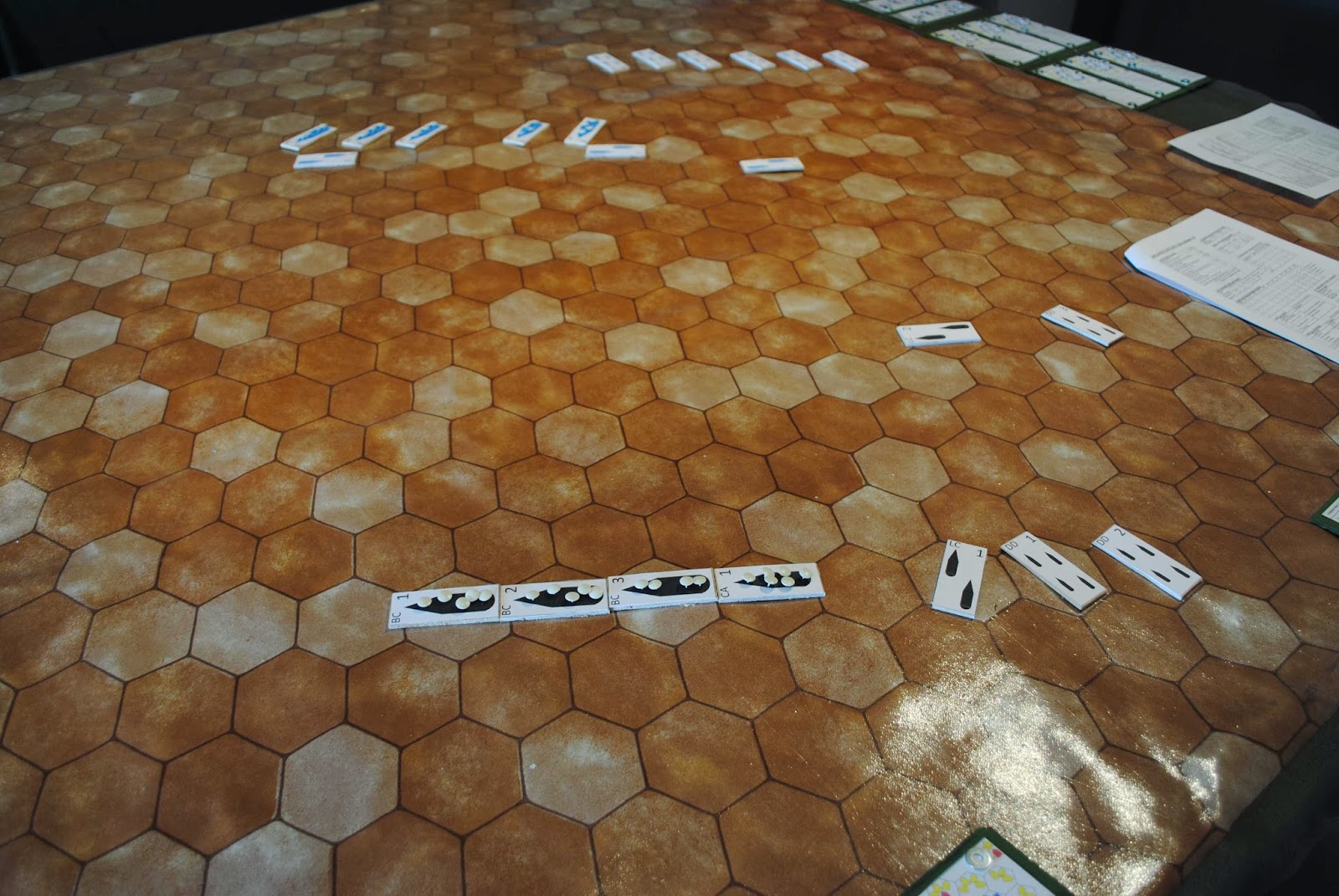 The Germans battlecruisers maintain their course as their light ships move to cover their rear from the British light ships. 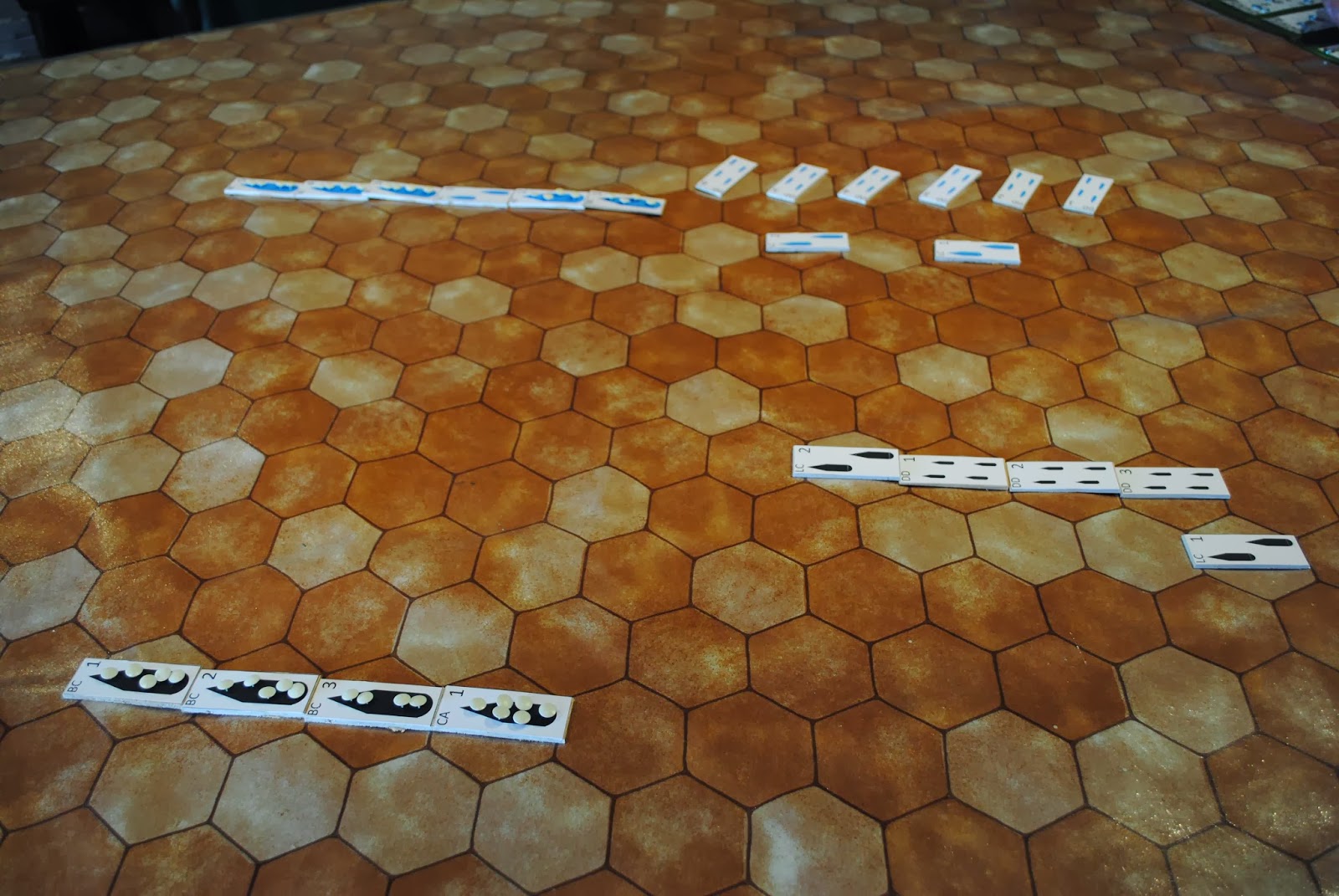 The main fleets have lined up just inside maximum range & are exchanging ineffective ranging shots while the light ships start their own battle behind them. 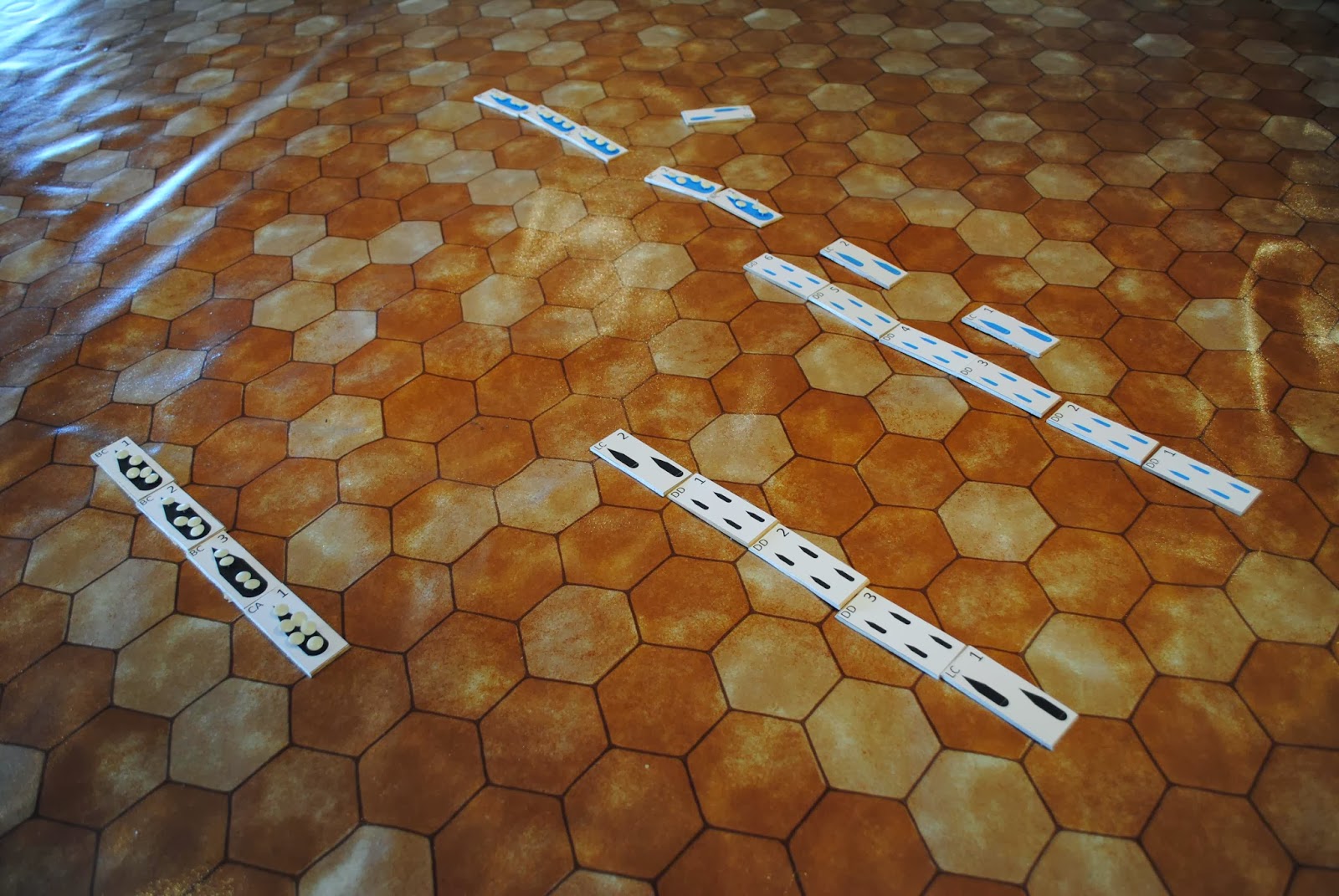 The main fleets still haven't scratched each other.  The German light ships look outnumbered, but their heavier light cruisers are helping them hold their own. 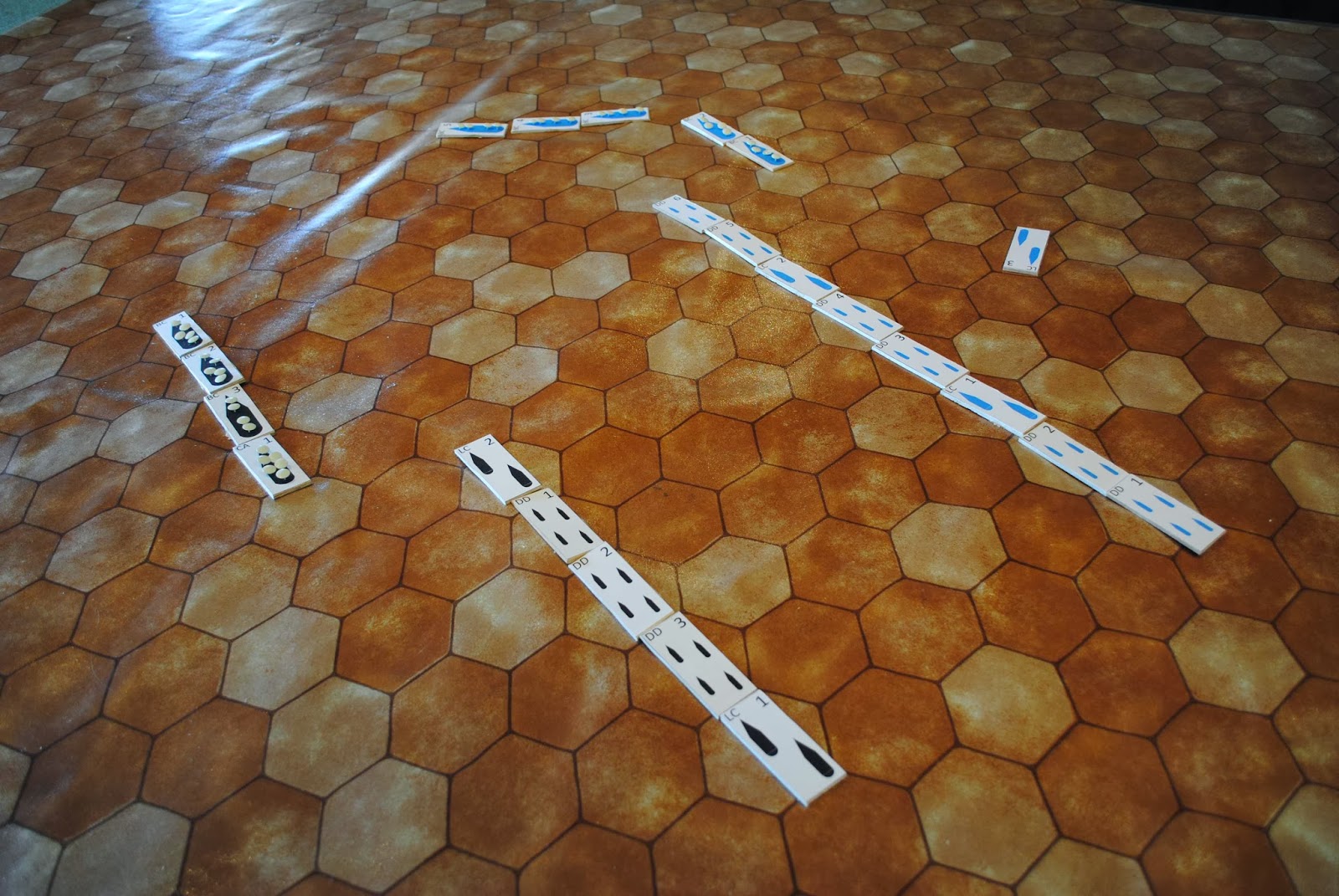 The British have become frustrated with the ineffective long range shooting and have moved to close the range. 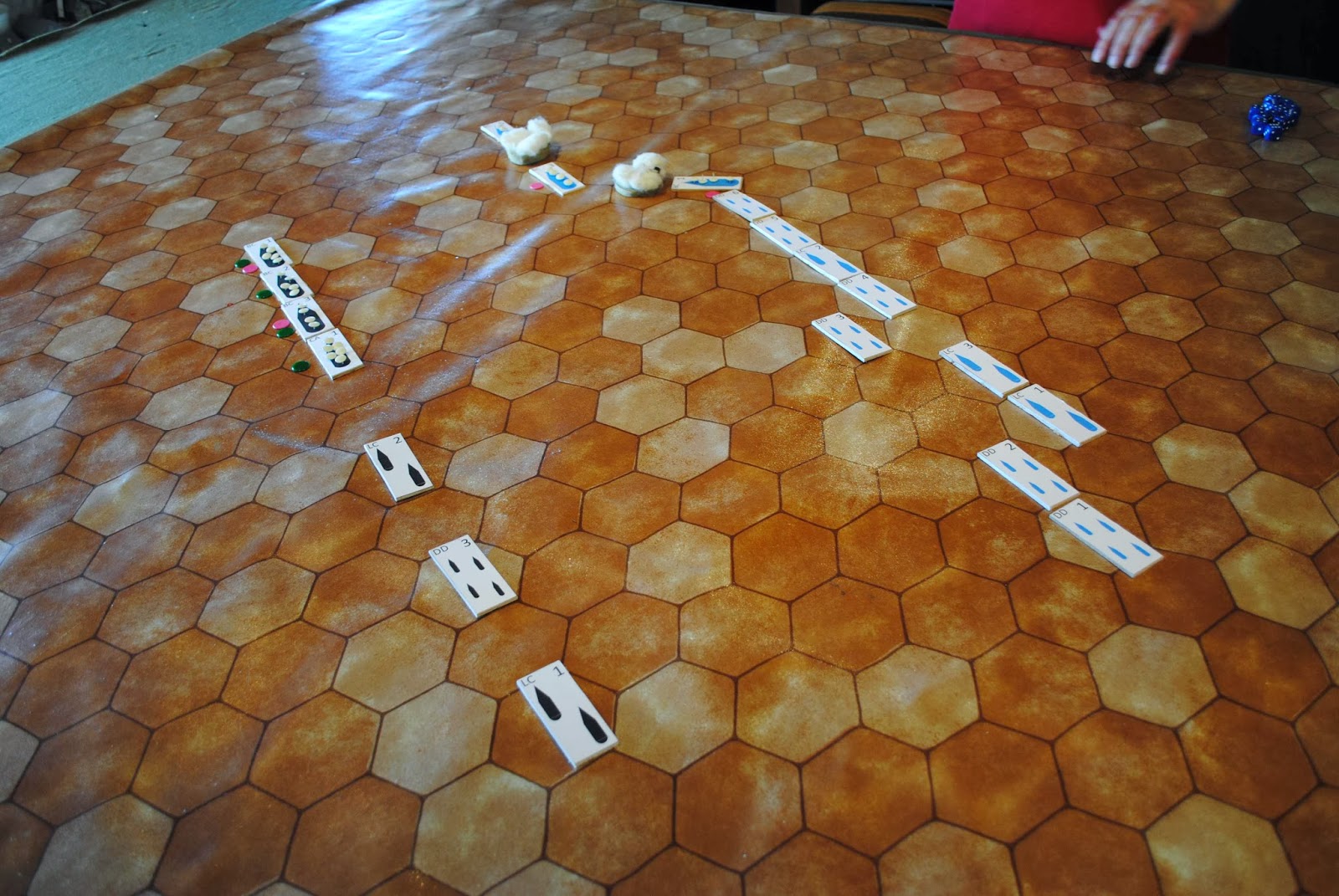 Closing the range turned into a disaster for the British.  It was the Germans who got the range first.  Not surprisingly, the New Zealand was no match for the Derflinger, but the Molke put down the Tiger and even the Blucher mauled the Indomitable.   The Germans DD's have been decimated, but most of the British flotillas have heavy losses & the German light cruisers are still in good shape. 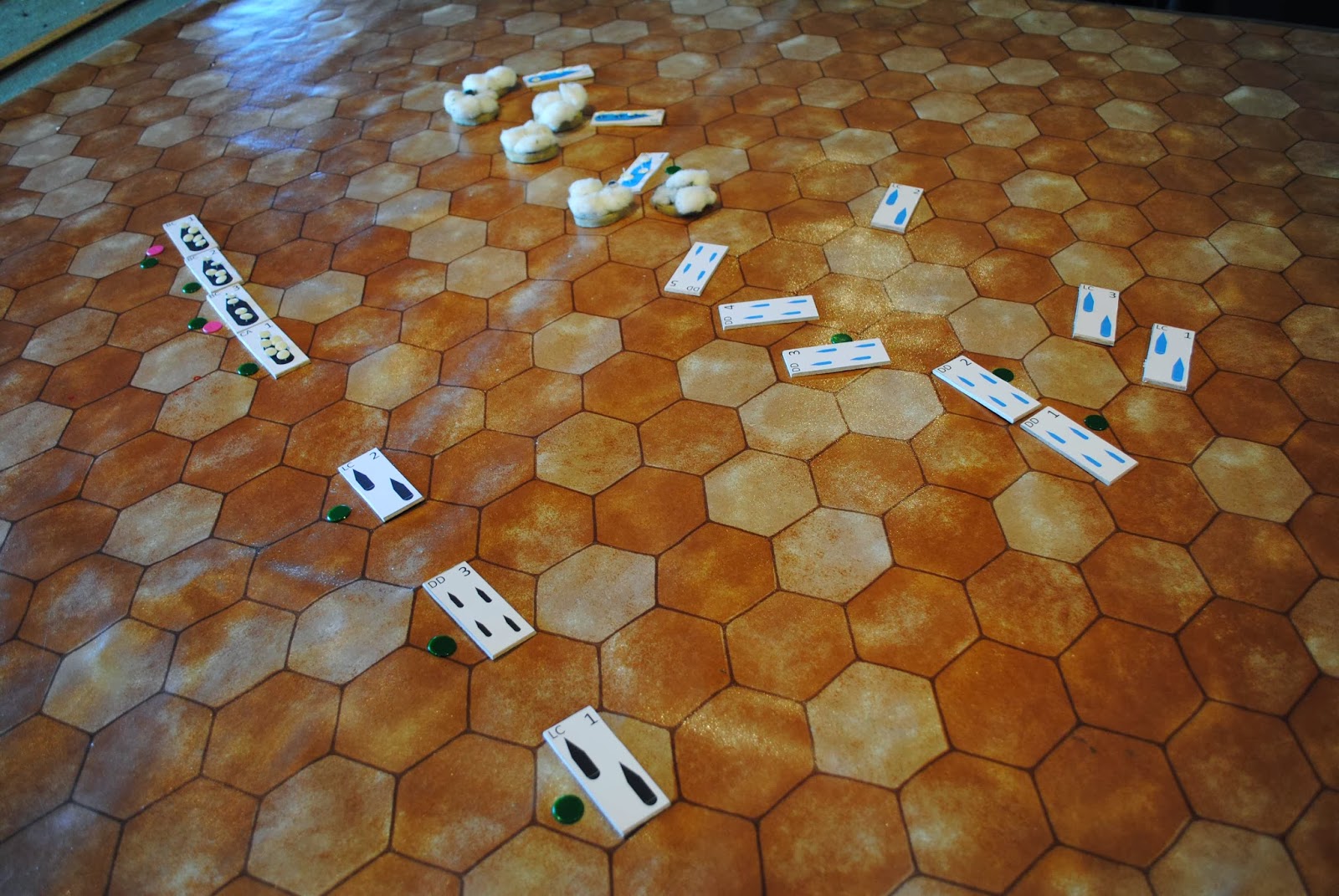 The British have no choice but to turn away laying smoke.  The Germans steam on to home as heroes. 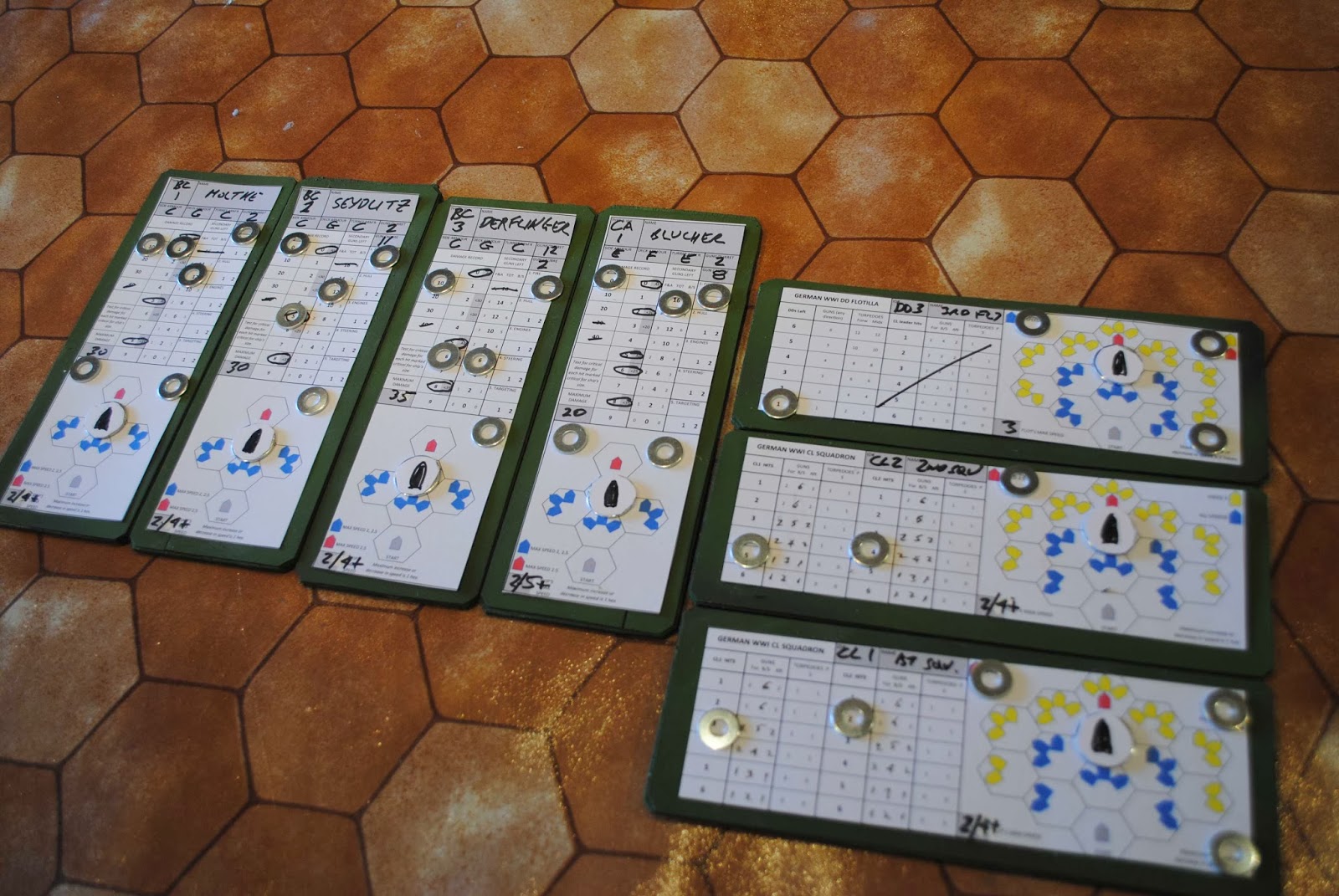 The game boards are magnetic movement trays from my Hail Caesar Warbands with paper overlays & washers for counters.  The ships are simply paper outlines on balsa with drawing pins as turrets.  They look a bit cartoonish, but you don't see much detail on model ships small enough to fit the hex grid anyway (& the brown North Sea isn't that realistic either).

This action is about the size of battle these rules are designed for - it lasted about 2 hours & was rattling good fun, especially for the Germans when they finally got the range right.  I made some revisions to the old rules for this game & they worked well, but having played this game I can see how to simplify a few more items to make the game go even better.
Posted by Jim Gandy at Monday, February 10, 2014 No comments:

Wars of the Roses 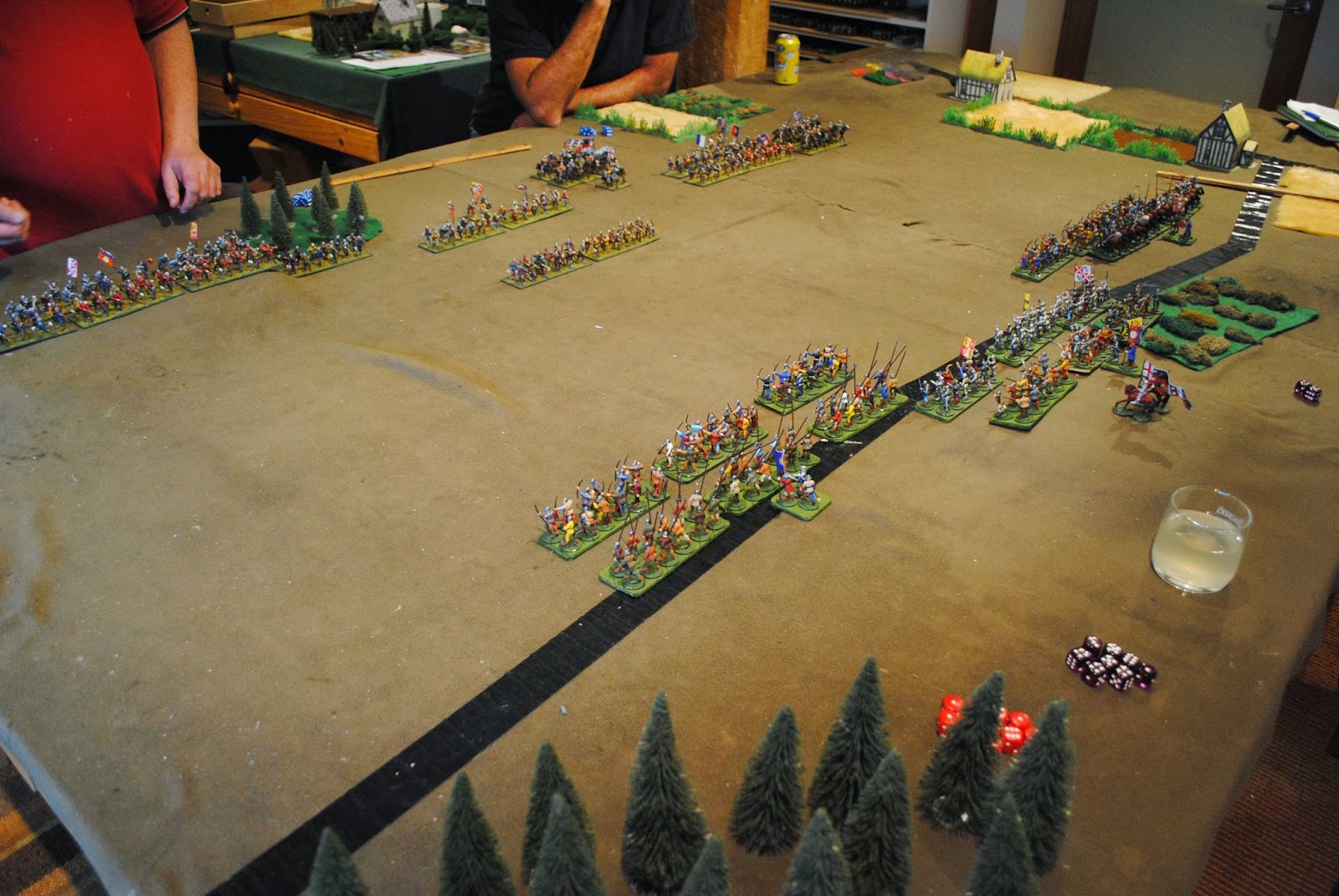 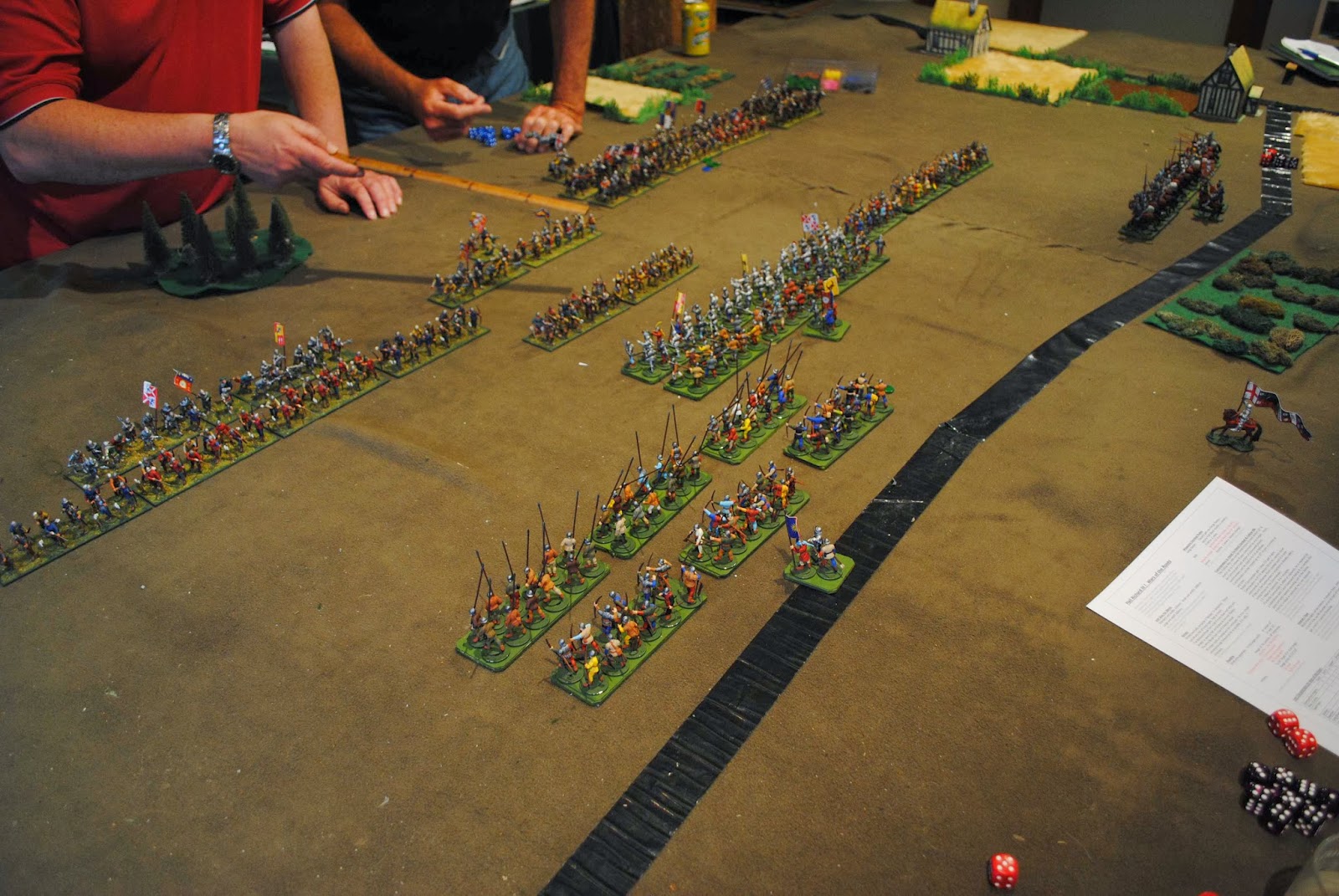 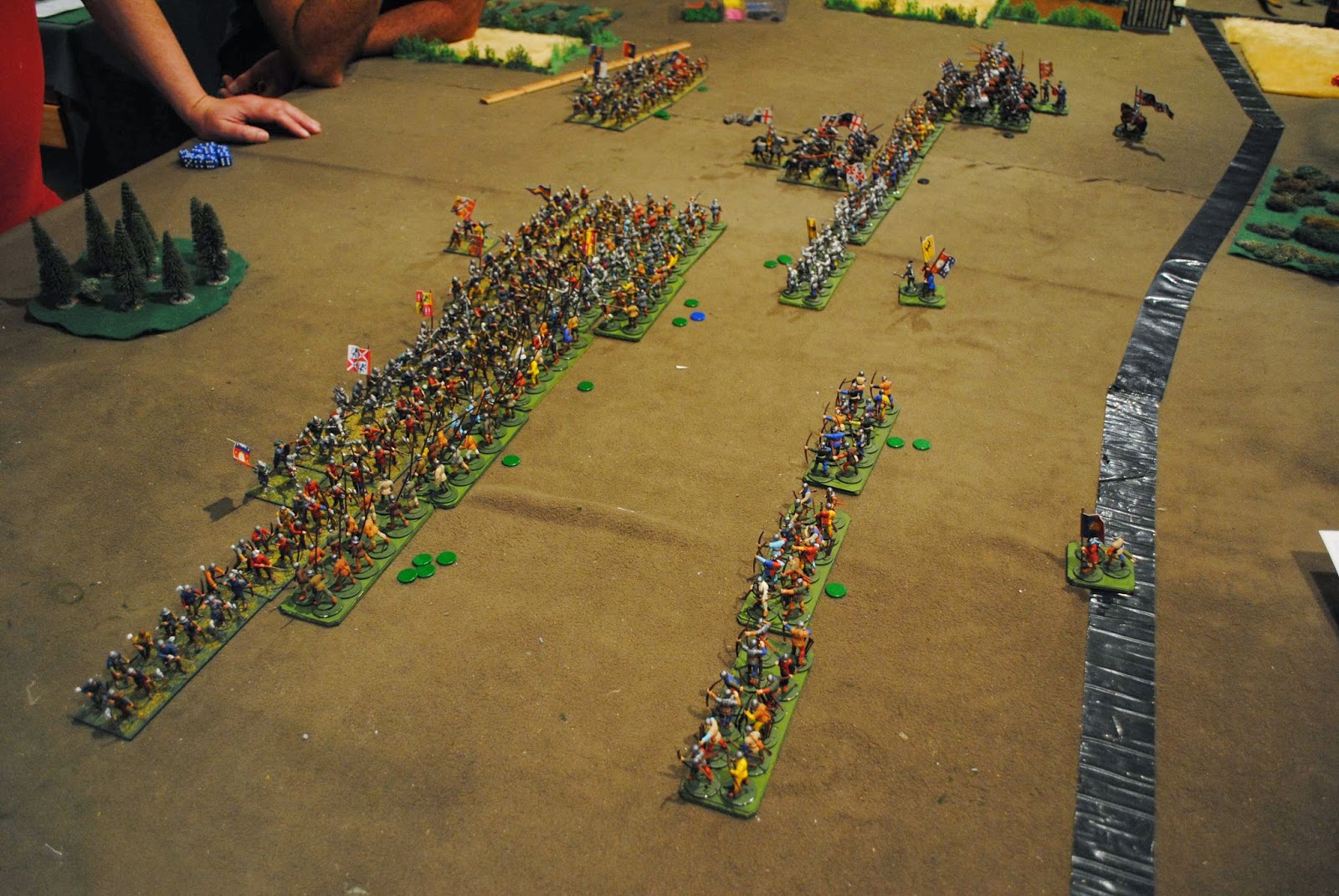 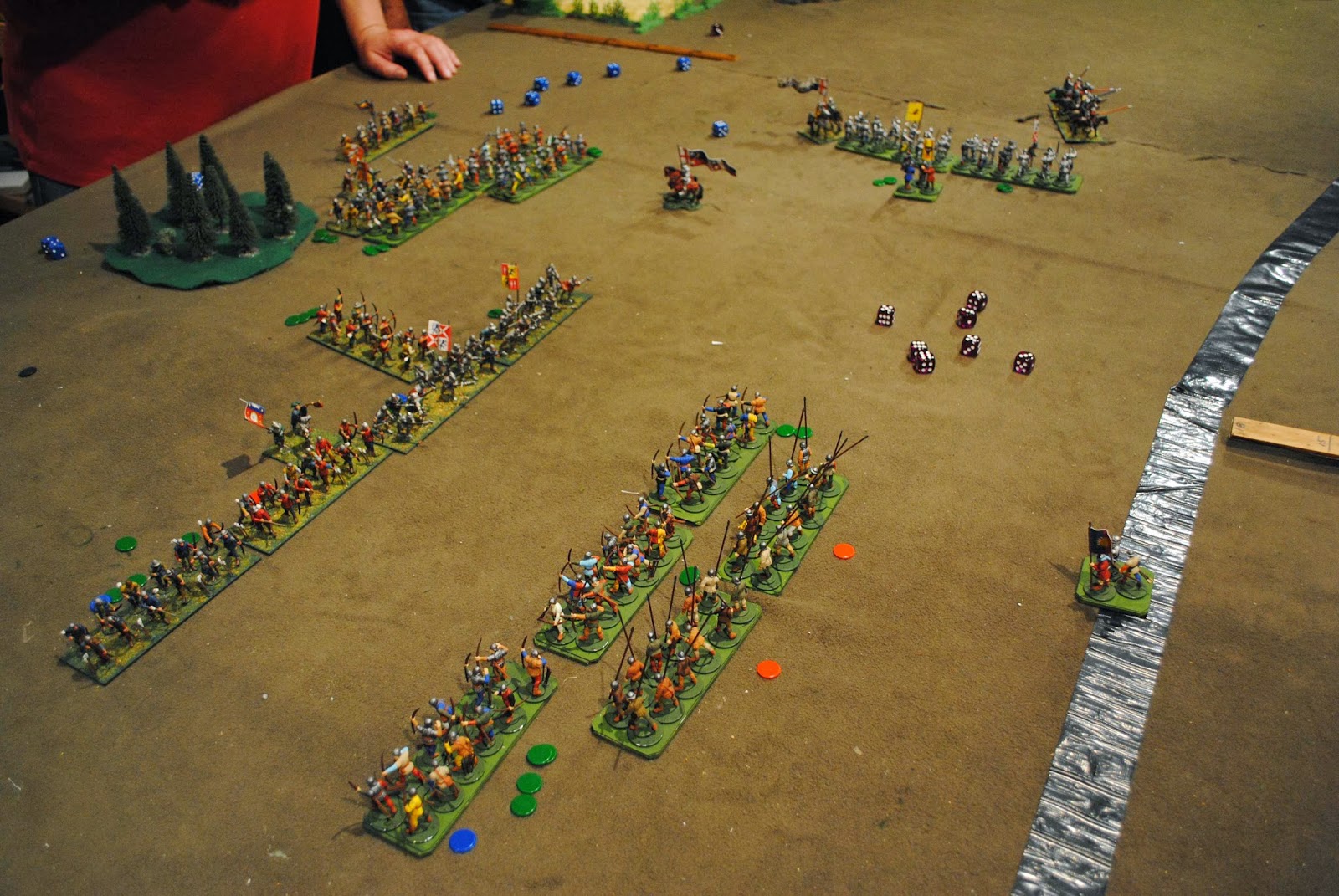 On the far flank, the Yorkist cavalry beat the Lanc's cavalry and went on the beat enough infantry behind to break the Lancastrian left flank division.  But the 3 Yorkist horse were all shaken while the Lancastrian horse destroyed all 3 bow units in that division, so the division broke as half broken & the rest shaken.
The Yorkist centre division drove back the Lanc's centre but didn't break it.  2 men at arms units turned right to attack a Lanc's cavalry unit in flank and break it.  It was too late to save the Yorkist right flank division but the Lanc's centre division was in bad shape.
On the near flank York's attack was beaten off and the spearmen rallied behind the bowmen. 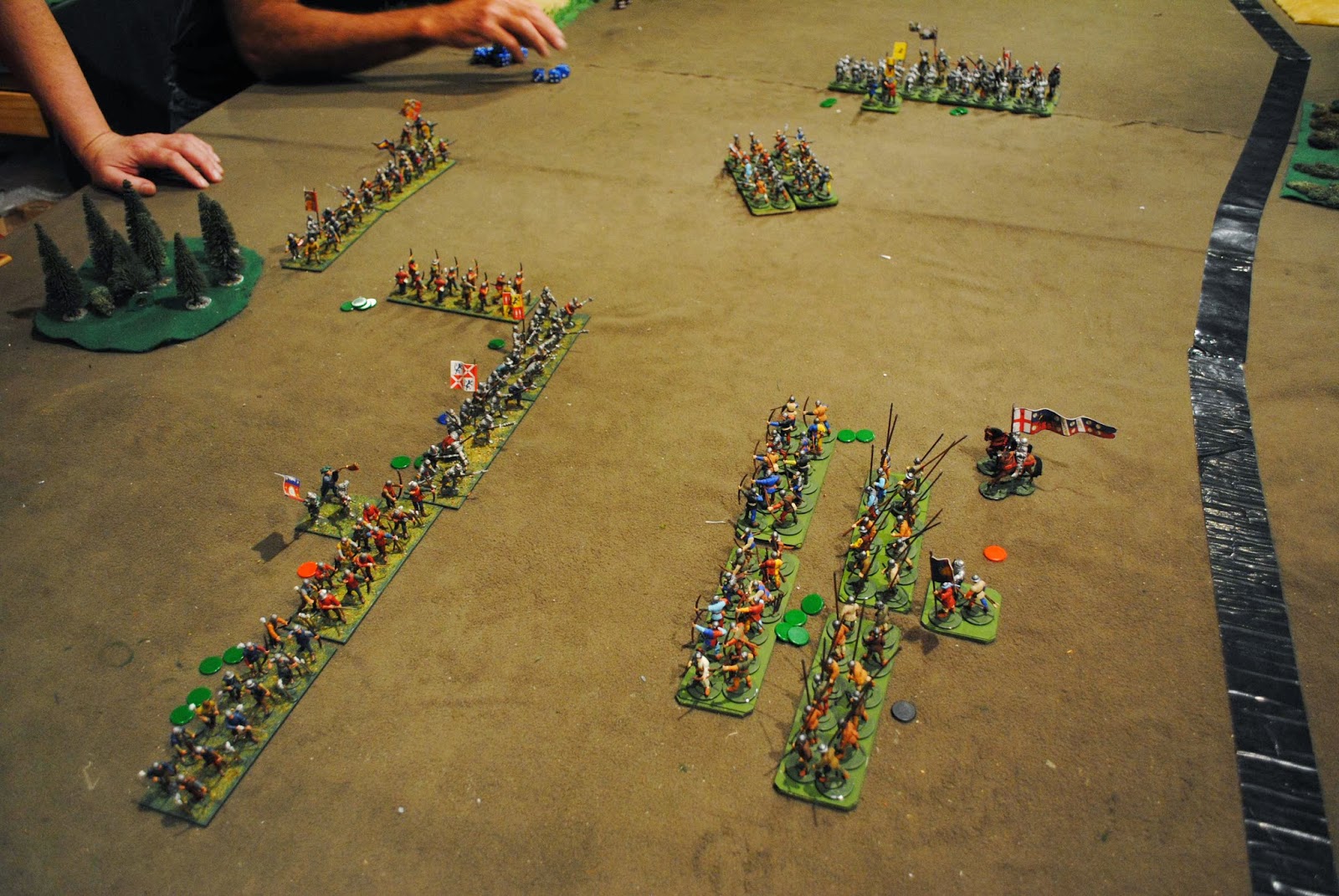 The near flank has stalemated .
In the centre, York's billmen renewed the attack on the Lanc's foot but were flanked by bowmen & beaten off.
Richard saw his only chance of victory was to beat the remaining Lancastrian cavalry, so he charged them with 2 units of men at arms. 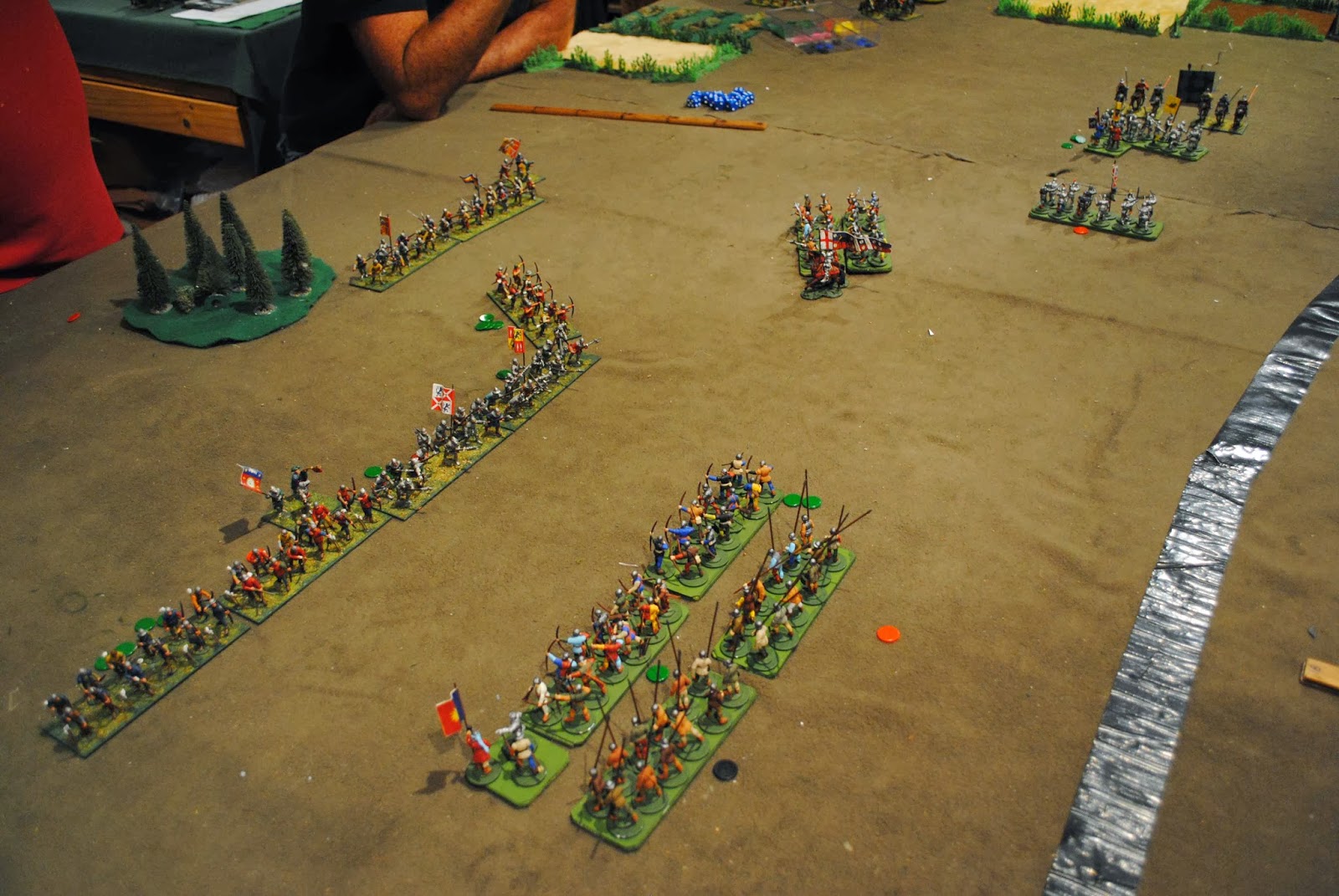 The first infantry charge was beaten off, but they fell back leaving the horse shaken.  One men at arms unit was unshaken & renewed the charge on the shaken horse.  This time the horse broke.  This loss broke the Lancastrian centre & gave York a hard fought victory.

We used Hail Caesar with our house modification for the medieval periods.  One of the really interesting conundrums in this era comes from the mix of bow units & melee units.  You want the bows in front to shoot up the enemy, but you want the men at arms or bills in front when the lines close.  The Lancastrians had more bow units than the Yorkists who generally tried to close with bill, spear & sword, while the Lanc's relied more on their bowmen.  Neither method was decisive in this battle so we remain none the wiser as which is the best option.