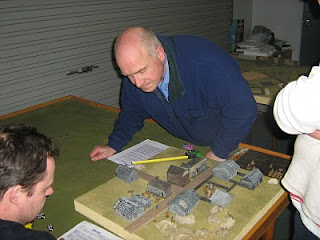 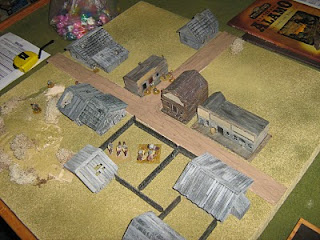 Playing Legends of the Old West. The townsfolk of Beaver Junction (Leigh) defending against a mob of thugs known as the Bunker Rats, lead by that notorious outlaw Griggsy, with Smitty the Kid and assorted toughs (Joe).
A great time was had by all. The outlaws couldnt shoot. And the townsfolk defender, William (the man in the bowler with the silver derringer) proved to be lethal, using his walking stick in hand to hand combat to great effect. The preacher kept shooting his shotgun rather than using the good book. And the sherrif was shooting from the saddle with great accuracy.
In the end the outlaws headed for the hills leaving three toughs dead, having only slightly wounded the preacher. The outlaws also left Smitty the Kid unconcious, but he revived and managed to sneak away in the confusion to rejoin his posse.
Peace has returned to the town. The peacefull townsolk have ordered some mail-order brides. But wait - there is rumor that the Guacamole Gang of mexican banditos are headed North. And William and the preacher have departed -- there wasnt enough money in town for William, and the preacher was saddened that his tithe wasnt paid. And what has happened to the darstardly Bunker Rats gang?
Posted by Nick at Saturday, July 31, 2010 No comments: 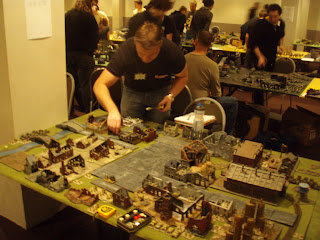 The camp crowd continued on a mostly winning streak.

Round 4.
Nick vs Grigsy -- Nick won 5-2 (the game was called for time). The game was really decided on the roll to see who would attack -- the board was REALLY hard to attack on!!
Jim vs Patrick -- Jim won 6-1, and so quickly I didnt get to see who he played.
Steve unfortunately went down.
Steve v. Tristan -- Steve lost. 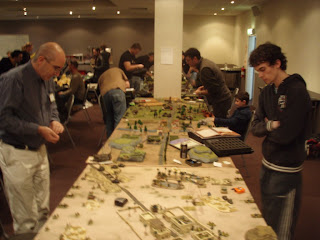 Nick vs Tristan -- Nick won 6-1. The game was on the Tunisia table, and the Stuarts managed to slip down a flank into the German rear area and take out the German artillery and two infantry.
Jim vs Smitty -- Jim got a draw 2-3. This was a slug on the stalingrad table. The Russian tanks couldnt make much headway, and their left flank attack disintegrated. Jim counterattacked, but couldnt get accross the table in time.
Steve v. John -- Steve lost.

The competition was fantastic. The venue was fantastic. A highly recommended event for anyone considering it in 2011!!!
Posted by Nick at Sunday, July 18, 2010 No comments: 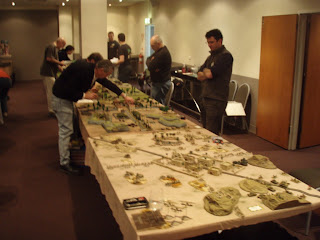 11 players fronted up.  There were 3 from Camp Cromwell (Jim, Steve & Nick) & about half a dozen from the Kingston Bunker Rats.

Round 3 - Fighting Withdrawal:
Jim & Nick were matched against each other in a scenario that suited the Fucilieri, and with the Regio Aeronautica actually showing up regularly, Nick was doomed. Italy 5-2.
Griggsy's Grenadiers beat Steve's.
Posted by Jim Gandy at Saturday, July 17, 2010 No comments: 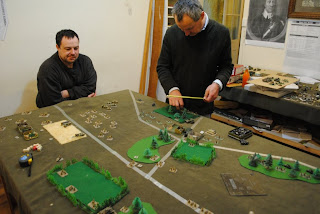 Jim's Fucilieri v. SteveJ's US Rifles
1500 pts Free For All

Steve thought that using a US army would be good training for fighting against them in the tourney next weekend, while Jim was desperate to find some redeeming features in the rubbish army he foolishly submitted.

As it happened the Fucilieri won the battle, but quite possibly only because of an inadvertant error in applying the Fair Fight rule on turn 1.  At least we got that lesson learned on home ground.
Posted by Jim Gandy at Wednesday, July 14, 2010 No comments: 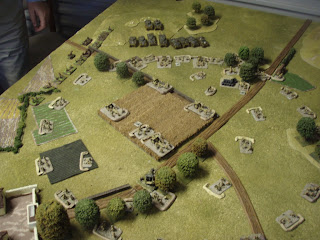 The US had the good luck to deploy in one corner where they could skulk out of sight of the Italian artillery until their reserves arrived. The Regio Aeronautica tried to help, but couldn't past the aamgs dripping off all the US vehicles. 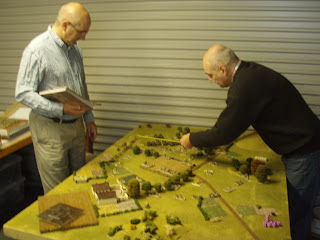 When the Infantry arrived they attacked the Fucilieri immediately supported by 10 Shermans.  The GI's were stopped by the Fucilieri but the massed Shermans overwhelmed the 75mm Cannon with their firepower.  When the Semovente 90's arrived the Shermans pulled back to regroup, then charged forward with stabilisers to take them out in one turn.  The Fucilieri & 47's tried valiently to hold the Shermans off, but just didn't have enough grunt to do it. 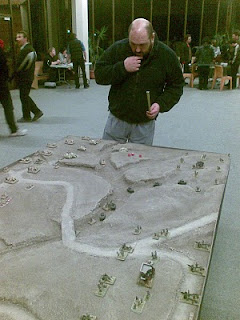 The Launceston club was out of action for two weeks for some other event. I was glad to go and get a game, but for unknown reasons there werent many other people -- it had the smallest turnout I have ever seen, possibly getting to 20 people. But I had a fantastic game with Nick B on the stunning table made by Darren.
Posted by Nick at Thursday, July 08, 2010 2 comments: 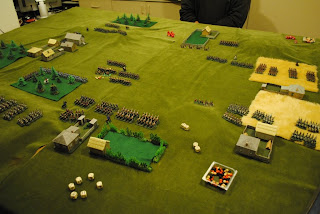 Both sides set up with infantry on both flanks and artillery & cavalry in the open centre.  Joe generally tried to advance, though his right was slow to get getting.  Jim advanced on his right only.

The Prussian cavalry charged forward dramatically riding down half the French guns, but an immediate counterattack by French dragoons stopped them & drove them back.

On the French left, the Prussians attacked the Bavarians in the woods while their cavalry charged again to cover their flank. The Bavarians stopped the attack & counterattacked while the cavalry fight was indecisive due to the failure of the French Cuirassiers to move up.

The French attack on the right caught the Saxons in march column & partly outflanked them as well.  But with some good dice & the help of some Prussian infantry on their right they held out until both sides were broken.

At this stage the Prussians had 2 brigades broken and the other 2 one bad dice off being likewise.  The French had 1 brigade broken, 2 with moderate losses & their reserve still uncommitted.  The French were declared winners.

The battle was as always very entertaining.  One issue that we didn't like was that the flank attack rules did not seem severe enough.  There were 4 flank attacks made in the battle, 2 were stopped and defeated, the other 2 were indecisive.  Bad dice was involved, but there really isn't enough advanatage for our liking.  Proposed house rule is unti attacked in flank gets no dice & autmatically loses & takes morale test.  If it survives the test, it can turn & face & fight back next turn. 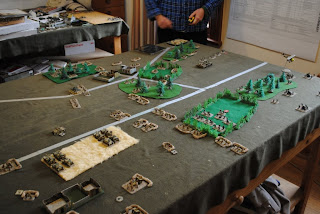 In the pic the Germans have started on the right & their objectives are on the left rear.
The Stugs smashed through the Fucilieri on the right and swept around behind the village.  Infantry attacks on both flanks both petered out due to mounting casualties in the small units.
The neblewerfers & howitzers engaged in an artillery duel for teh whole game.  With the help of the Regio Aeronautica the Ities gradually got on top & destroyed the werfers.
The German reserve infantry came on and attacked the wood full of Fucilieri to avoid the HMGs deployed on the objective.  With Stugs attacking from the other side, the Fucilieri were quickly destroyed.  The Germasn were now in striking distance of an objective, but they had to come out of the woods to take it.  The Stugs drove the HMGs back & took it, but the Semos had been patiently waiting in the cornfield & blew them away.  The Germans failed army morale.
Posted by Jim Gandy at Wednesday, July 07, 2010 No comments: