In Sortie no.3 the Germans attempted to gain economic brownie points by sinking shipping in the Skagerrak & off Bergen in Norway.  The High Seas Fleet went to the Skagerrak while a Task Force of Light Cruisers & Destroyers simultaneously went to Bergen.  The Bergen mission was a success, but the HSF was intercepted by the Grand Fleet before it could complete its mission.

The battle in the Skagerrak, described in an earlier post was indecisive, but at nightfall the Germans were inside the Skagerrak Bight with the Grand Fleet between them & home.  The Germans managed to find a way to avoid the grand Fleet during the night & all ships made it home.  While only one British capital ship was sunk, both sides faced the need of some rest after two back to back sorties & a long period of repairs before they can take their whole fleets to sea again.

However the Germans did not take their 6 obsolete battleships of the Deutschland Class to the Skagerrak & they immediately embarked on Sortie no.4 sending the old ships across to England bombard Hull & gain another economic Brownie point.  The raid took the Brits by surprise, but the ships did not get off scot free being attacked by planes & submarines on the way home.  The 2nd phase of the sortie involved sending out a Task Force of light ships to scout for British minelayers in the Helgoland Bight.

This task force encountered a detachment of British destroyers & light cruisers they identified as the Harwich squadron which had set out in a vain pursuit of the raiding force.

The two fleets were evenly matched, but neither side was keen on causing a bloodbath & they dallied around just out of effective range for some time.  It was pretty obvious both sides were hiding something.

The first new arrival for the Germans was a Zeppelin (base only visible in pic).  Then Beatty showed up from the north.  The Germans about faced & ran SE.

The British followed in hot pursuit, but they suddenly had second thoughts when torpedoes started shooting past their leading destroyers - revealing they had run into a wolf pack of German submarines.  Only one destroyer was hit, but the Brits called off the pursuit & turned for home.

We whipped through about 4 hours of game time in a bit over an hour with the only shooting being several torpedoes fired by hidden subs.   It is a fact of life in this era that it is hard to force a decisive action, but with hidden campaign movement the risk of disaster is still always there & this keeps the games exciting & interesting. even when they are in the end indecisive.

The table is about 9'x6'.  The Mission is like the Tank War mission, but with 7 objectives.  There 3 objectives along the ridge on the left, one on each of the 2 bridges, 1 in the village & one on a hill just off-shot to the right.  The Germans start on the right.  In the deployment turn each side can put their units down within 24" of their baseline.

Both sides covered their objective at the far end with an MMG & left it at that.
On the near flank the Germans are advancing through the woods with 2 infantry squads.  The Russians have infantry in the woods to defend the bridge.
In the centre both sides have most of their infantry. The Germans are supported by a MkIII & an armoured car in the orchard.  The Russians have T34 coming up in support.

Things did not well for the Soviets.  Some hot shooting by their mortar & artillery support on the ridge & armour support helped the grenadiers destroy the Soviet attack in the centre.  On the left the Soviet infantry was no match for the German veterans & they took the bridge there too. The Germans did not lose a unit & ended the game with 5 of the 7 objectives.

Posted by Jim Gandy at Saturday, September 26, 2020 No comments:

With a pause between sorties in the Jutland campaign we got our feet back on dry ground with the Battle of Southam 1642.

Mike & Chris' Royalists are on the left, Mark & SteveJ's Parliamentarians on the right.  The Royalist army has twice as much cavalry as parliament, but is weak in infantry & guns.

Parliament supported their cavalry on both flanks with a hedgehog & artillery. The Royalists made a general advance.

On the near flank the Royalist horse have fallen back & Parliament's hedgehog has broken up so the foot can advance on the Royalist foot's flank.  In the centre both side's musketeers are losing casualties in an exchange of fire.

On the near flank the Royalist horse have made another unsuccessful while Parliament's foot have broken the Royalist's right flank infantry regiment.   In the centre both sides musketeers have had heavy losses & the pike shave also been engaged in heavy fighting.

The Royalist have lost their artillery to musketry & have lost more casualties than Parliament, so they decide to break off the action before they fail an Army Break Test & keep their army intact for another day.

This battle is the first of two in a mini campaign.  Both sides will receive reinforcements for another battle in the next couple of days.  (Next week our time, or later if the Jutland campaign produces another action).

In the battle in the Skagerrak both sides drew off at nightfall & reorganised their fleets into night formations while they formulated their night manoeuvre plans.   At nightfall the High Seas Fleet was inside the Skagerrak inlet off the north sea with the van of the Grand fleet between them & home.

Both sides sent their night manoeuvre plans to the umpire who determined whether there would be any night action.  Wary of the Germans advantage in night fighting the British chose to move south to be between the High Seas Fleet & base at dawn hoping for renewal of the battle in daylight.

The British succeeded in avoiding a night action, but the Germans had plotted a course that not only avoided the British during the night, but avoided being spotted the next day.  Both sides got home without further action.

While only the old dreadnought Temeraire was sunk in the battle, both sides have many ships with significant damage.  The dockyards on both sides of the North Sea will be busy for some time.

Last week the action commenced at 1700H & ran for 21 turns until 2030H.  We continued the battle tonight with 9 turns to go to night fall at 2200H.
Jim is Admiral Scheer, Mark is Jellico, Chris is Beatty.  Mike is table umpire.  PeterW, PeterC, Dale & SteveD observed on Zoom.

When the Brits start to get the range & start hurting the Germans, Scheer sends out his DDs to lay smoke to cover a reorganising of his line.

With his line straightened Scheer let the smoke clear in front of his van while still shielding his rear.

As both side get serious hits on each other in the big gun duel the British DDs launch a torpedo attack on the German van.

The German van turns away from the torpedoes as damage mounts on the leading squadrons of both sides.  In their rear the Germans launch torpedo attack on Beatty's squadrons.

The the Germans have inflicted more damage than they have received, but they cannot afford to take losses like the British can, so Scheer has ordered the whole High Seas Fleet to turn away behind their DDs laying smoke & the Grand Fleet is pursuing.

With battle reaching the table edge, we moved the hex sheets one module back across the table & the Germans continued their retreat as night approached.

At night fell the Germans let their smoke clear to get a last shot at Beatty & Admiral Scheer needed a drink.  Night visibility is 4 hexes, so all contact is lost at 2200H.

The rulers mark the campaign map hex sides (which are 24 battle hexes wide).  The procedure now is that a map will be prepared of the location of the squadrons at nightfall.  Each side will prepare a night plan showing the movement of their squadrons thru the night.  The Umpire will determine if there is any contact ( that is any ships get within 4 hexes of the enemy).  If not, normal campaign moves will resume at dawn.  If there is a contact, there may be a night action to fight next week.

Jutland Campaign: Battle in the Skagerrak

In the past couple of weeks we have been fighting a Jutland campaign umpired by PeterW & Mike.
Germans: Jim, SteveD & PeterC.
British: Dale, Mark & Chris.
PeterW, Dale & SteveJ are in Canberra participating by email & Zoom.

Each has to plot sorties over a 3 month period to rack up VPs by bombarding, sinking commercial shipping or sinking warships.  The sorties are plotted on a hex map of the north sea with hidden movement adjudicated by the umpire. This account of events to date is limited by being written by Admiral Scheer who is ignorant of much of the British manoeuvres & reluctant to disclose too much about the German's. 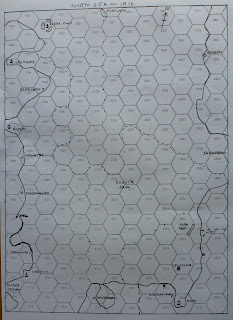 The first German sortie was a  successful light ship raid on the British fishing on Dogger Bank.

In their second sortie the High Seas Fleet put to sea, but turned back after ascertaining that the Grand Fleet was at sea & they were in danger of being cut off from base.  The Germans think they might have had a minor success in luring some British warships onto a minefield.

The third German sortie was a raid on the shipping in the Skagerrak & this lead to a battle to be fought on the table top (using our home grown Dreadnought rules).

The table at the start of the battle.  North is along the table towards the right of the camera location.  The dice & sticks indicate campaign hexes which are 24 battle hexes across = 24 Nmiles.  The Germans have 3 battlecruisers & 2 DD flotillas marauding shipping in the near hex & at 1700H an unidentified British force has appeared on the NW side of the hex.

The British force was a squadron of Beatty's battlecruisers.  The Brits got first move & moved into sight & into range of the Germans to fire first.  Despite the extreme range Oakie immediately ranged in on all 3 German ships & hit them hard before they could reply. 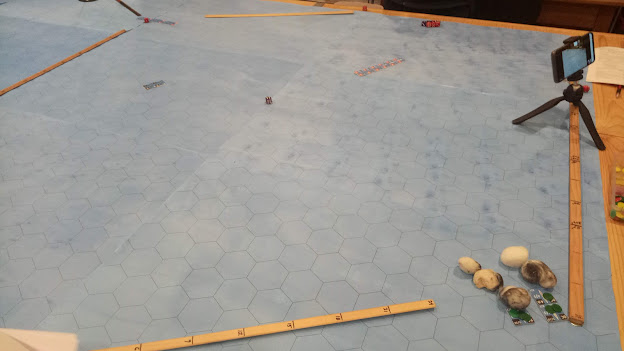 But Hipper was not alone.  He was joined in the adjacent hex by his other 2 battlecruisers & 2DD flotillas returned to the fray.  At the same time the High Seas Fleet came into sight from the SE.
Beatty's battleship squadron was now also in sight behind his battlecruisers as well as a flock of light flotillas to the south.  But now it was the British turn to lay smoke & run for it with the High Seas Fleet in pursuit, though the Tiger took some heavy hits  before it hot away.

The German's pursuit of Beatty took a sudden nasty turn when they saw the Grand Fleet on the horizon.

Both fleets had advancing on each other in columns abreast & both side turned to the south to form a line of battle.

The two fleets steamed south exchanging fire at long to medium range.  At 1900H battle time we called a halt for the night.  We will continue next week.

At this stage the Germans have lost no ships, with 10 damaged, none critically.  The British have lost 1 ships sunk (old dreadnought Temaraire) & 10 ships damaged, 3 of them so badly they have been pulled out of the line.
Posted by Jim Gandy at Wednesday, September 09, 2020 No comments:

The French are on the left.  Both sides have 2 infantry divisions of 6, 2 cavalry divisions of 4 & 2 guns.  The Russians also have 2 grenadiers units.

The first French cavalry charge failed to break through giving the Russians time to reinforce their left wing cavalry with another cavalry brigade & artillery.
The Russian infantry attack in columns has failed to break the French in line.

Posted by Jim Gandy at Wednesday, September 02, 2020 No comments: