The Isdonisgrad campaign is back on track after a long break for Mahrajah. It was Turn 4 (Russian's move) & they attacked on a 3 hex wide front. On their left, the Panzergrenadiers fell back before a Strelk. On their right Motostrelkovy are making what has to be a pinning attack against 2 German Coys. The centre, hex J5 is their main attack. 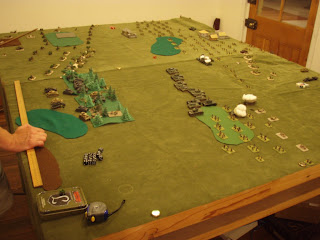 The Germans deployed in a defensive line, Infantry on the left, Panzers on the right in or behind a large wood.
The Russians deployed the KVs & T34s left of centre, 2 Strelk on their right, Pioneers on their left, Rockets & mortars in rear & attacked immediately.

The Germans started off well with the Hs129's & 105s destroying the T28s in one combined attack. Steve did a Marder shuffle with the Panzers in the wood & popped a couple of T34s. But on the left Jim did poorly with digging in leaving the Pioneers vulnerable to the approaching swarm. Steve was lucky with bogging rolls in the woods but Gandini ordered him to pull back before he ran out of luck. The Russians advanced steadily but lost the odd T34 each turn to 105s or Steves opportunistic sniping. But the KVs were invincible (at least in Gandini's head) so on turn 4 the Germans started a general withdrawal (delaying it a turn longer than legally required to have one more shot at some good targets). They got away with moderate losses.


The pic is taken from behind the German right. Some burning Russian tanks mark their advance. Steve waits with his Lehr dice ready

The KVs had Gandini beaten before the battle started & the Axis started the battle with the intent of doing a bit of damage & then getting out of there. But the way things went, if he'd allowed Steve to be more aggressive they might have won. But with the KVs having a charmed life under the 105 templates he decided the Panzers were too precious & the risk was too great.
Posted by Jim Gandy at Wednesday, January 30, 2008 No comments: 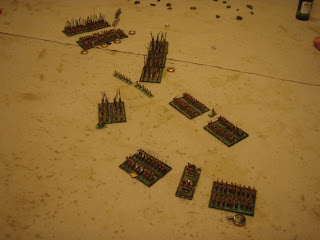 With both sides inexperienced in the new rules system, niether side did much in the way of cunning manoeuvres. There were long dice fests on some parts of the front and noone did much in the way of flanking manouvres. The Pergumenes won the infantry fight on their right, but their victorious grotties ran into the phalanx and were eventually beaten, and the poorly trained Pergumene citizen phalanx was too unmanouvrable to exploit its win. Eventually, the Seleucids got the upper hand in the cavalry fight on their right, rallied their Companions & Greek Heavy cavalry and turned them on the centre. When they defeated the cataphracts it was game over for Pergumum.
The pic is taken behind the Seleucid right. On the far end the Seleucid Phalanx has just routed the Galacians (turned about, but not yet moved in rout). The Pergumene Citizen Phalanx is next, then the Pergumene Cataphracts are about to be gang charged by the Argaraspids, Companions & Greek Horse.
Posted by Jim Gandy at Wednesday, January 23, 2008 No comments: 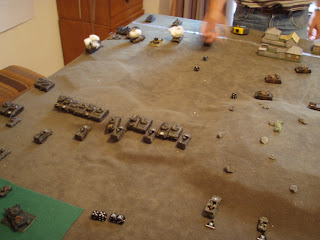 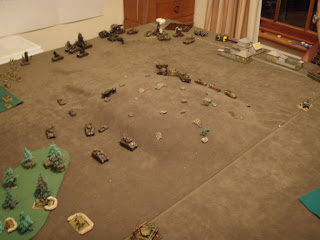 Both sides deployed virtually all their forces on the one side of the table (German right, US left) where a ridge separated the deployment areas. Nick rushed forward onto the ridge in a mass. Steve countered by popping tanks onto the ridge to fire & then stormtroopering back. The Luftwaffe mostly failed to turn up and missed out on the juicy targets, and the Germans missed some stormtrooper rolls leaving the odd Panzer out to dry. But on the other hand after some early success Nick's shooting was hopeless (eg: A Panther survived being outflanked by 2M18) and while the MkIVs copped a pounding, their morale held. After a few turns of furious firing 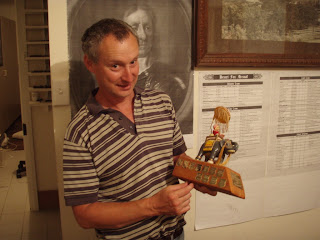 the US armour was mostly destroyed taking only 2 AA, 3 MkIVs and no pussies with it.
Nick decided the attack could not go on and pulled back with his survivors to defend his objectives with infantry supported by the remaining tanks & the 105s. Steve followed up cautiously on his right with the Panthers, recon & HQ while sending his Tiger, 2 MkIV & SPAA around the left of the big hill. Nick needed some hot dice for his artillery & surviving tanks to get out of it now. He just didn't get them and the Germans mopped up the last tanks, so Nick conceded.
It was a decisive victory in the end, but it was in the balance for a good while. Nick had his chances, but just couldn't take them.
So SteveJ is Camp Cromwell's Champion for 2007.
Posted by Jim Gandy at Thursday, January 17, 2008 No comments: 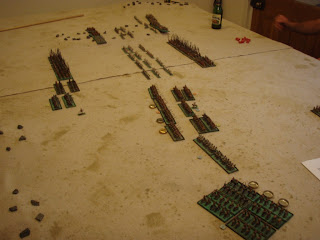 The battlefield was a plain with a rough ridge perpendicular to the front on the Perumene left.
Both sides deployed their Phalanx next to the ridge with open order infantry on the ridge. Om the other side of the phalanxes were Mercenary peltasts, then heavy cavalry, then light cavaly. The Seleucids also had some Galacians on their far right beyond the ridge and their Argaraspids behind the cavalry on their left.

The rules require Command groups to be activated before they can move. Average command systems as these both were get 3 command dice a turn & can roll for activation with each one until they get a fail. So once you have had 3 fails you can't activate any more CGs that turn. This forces the players to prioritise their orders. Renfrey generally did pretty well with activation while Richard did not. He got his cavalry moving, but the Argaraspids used up all his activation dice for 2 or 3 turns leaving the phalanx imobile & his heavy cavalry with a hanging flank.

The pic is taken from behind Renrey's right. light cavalry are slugging it out in the foreground. Galacian cavalry have moved into the gap left by the Argaraspids failure to activate (the corner of that unit is just visible on the right). The heavy infantry are waiting orders.

The Pergumene caratphracts were initally beaten, but then hung on grimly while Renfrey manoeuved cavalry onto both flanks of their oponents. But both flank attacks were held off & the cataphracts finally broke. The Argaraspids eventually moved up & attacked the flank of one lot of flankers to save that side. On the other side, the Seleucid Heavy Cav held on until the Companions finished off the cataphracts and returned to help out.

On the ridge, Renfrey softend up the enemy with bowmen but Richard eventually activated some orders and counterattacked with Galacians plus Thracians to clear the ridge.

In the centre, the Seleucid phalanx was crippled by bowfire before it was got moving and when it finally reached the Pergumene conscript phalanx it was promply routed. But despite the success of the Pergumene phalanx, they had lost too much elsewhere and failed army morale.

The rules-in-progress played pretty well with a few more bugs showing up & being ironed out. The new Command Rules in particular change the game a lot & I think for the better.
Posted by Jim Gandy at Thursday, January 10, 2008 No comments: 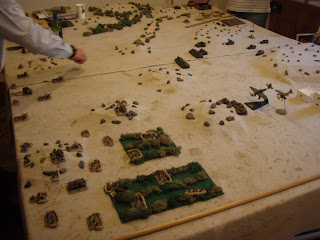 Nick's US Light Armour v. MarkO's Fucilieri in an Encounter Mission.
Mark deployed Infantry about the objective in the vineyards on his right, 105s around the centre objective, Pak38s & 88s on the hills between.
Nick put down 1 Honey platoon on his left, while in the centre he had HQ, 2 Honey platoons, S 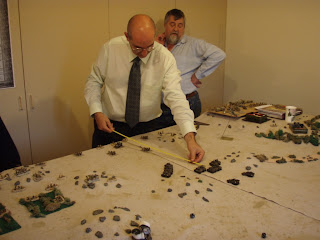 PAA & SP 105s.
The Axis dug in while the US advanced immediately. On turn 2 the Regio Aeronautica took out an entire Honey platoon (3 killed, the rest failed morale - see pic 1) while the USAF took out an 88 - but that was the end of effective action for both air forces. The US 105s paid their way by smoking the surviving 88 for the rest of the battle. The lead Honey platoon took the central objective while the other provided fire support. But even with the 88s out of it, the Axis managed to kill one of the Honeys on the objective & bailed enough to force a morale test which they failed. The 3rd Honey platoon with the HQ attacked then retook the objective. This 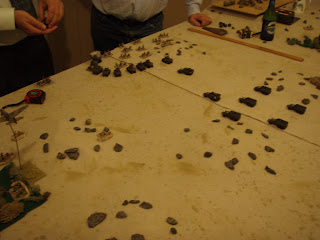 time the Ities got some Fucilieri from reserve in the right place to come on and contest. But by now there were only 1 105 & 1 Pak able to fire at the Honeys & they seemed to have run out of luck - they did little while the Honeys drove the Fucilieri away and again retook the objective (see pic 3). Another Fucilieri came on to dispute it but they too were mown down leaving the Ities with nobody able to dispute the objective & not enough firepower to dislodge the Honeys. So it was a hard fought victory to Nick.
Posted by Jim Gandy at Friday, January 04, 2008 No comments: 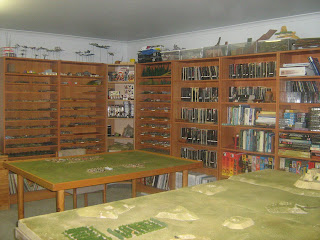 Nick's new wargames room is now in action. It comprises a double garage space & has 3 6x4 tables which can be deployed as 1, 2 or 3 tables. On New Years day he got in some practice for his forthcoming Maharajah Preliminary Final. Jim & SteveJ commanded the Italians in two Encounter battles against his US Armour on am 8x6 table set up as a rough copy of the table at Camp Cromwell.

Game 1: The Ities deployed Infantry on both objectives with 88s & 75s in support. The Honey swarm (17 of them) charged the RH objective behind the vinyards. The Fucilieri beat them off on turn 2, but the USAF had kept the 88s quiet & the artillery didn't do much in support. Next turn the Fucilieri was destroyed when the Honeys renewed the assault leaving them unopposed on the objective. With no Itie reserves arriving to contest, it was all over.

Game 2: This time the Ities deployed 105's, 75's, Pak38's & 88's with no infantry. The US attacked the LH objective rather than take on the Paks in the vineyards. Their advance was slowed a bit by the terrain on that side of the table and this time it was the Luftwaffe that showed up rather than the USAF. The 88's blew away most of a Honey platoon & another was slowed down by terrain, bogs & the 105's. But the 1st platoon with the HQ attached charged home on the objective, destroyed the 75's guarding it and took it. Once again the USAF failed to take out the 88's & the Honeys on the objective evaporated under a hail of fire from the 88's & 105's. The US had now lost all their Honeys while the Itie anti-tank & artillery was still intact and their reserves were pouring onto the field. It was clearly only a matter of time before either some Fucilieri walked across the table onto an objective or the Itie artillery caused Coy morale failure (the US HQ had been destroyed on the objective).
Posted by Jim Gandy at Friday, January 04, 2008 No comments: