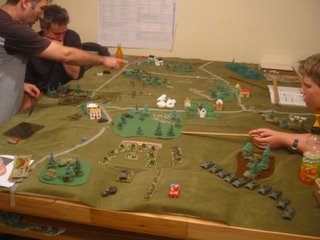 The Russians defended the forward objective with a big infantry platoon, the rear with their artillery, & held their T34s in ambush.
The Axis deployed with Germans on the right (opposite the forward objective) and Ities on the left.
The Germans moved up & deployed their Pak40s in range of the objective and advanced steadily with their elite infantry.
The Ities deployed their mortars & guns in the centre to give their allies fire support while advancing on their left with infantry & the dreaded L6s.
The Russians got all their reserves in 3 turns, the 2nd Infantry moving to support their mates on the forward objective & the a/t guns & rifles to support the artillery on the rear objective.
The advance of the L6s & Fucilieri on the right spooked the Russians into dropping the T34 ambush a long way from the real action - a fatal mistake. 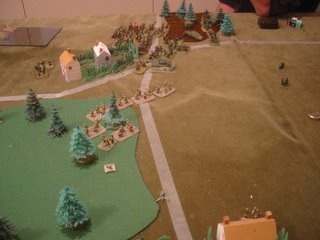 Itie infantry wheeled right and hit the forward Ivans in flank as the Germans hit them in front with 2 platoons and more coming. The first Ivan platoon was soon destoyed under the combined assault. The second Ivan platoon arrived just in time to take over the line, but in the open they were cut up by fire then finished off by the German infantry. The T34s tried to get over to dispute the objective by cutting through a wood, but a Fucilieri Coy with Passagalia bombs intercepted & stopped them.
An Axis victory by a mean combination of German quality & Itie numbers. The Germans lost 2 platoons, the Russians 2 platoons, the Ities none.
Pic...002 shows the T34s on their Goose chase while the objective is under big pressure on the left.
Pic...003 shows the objective being over-run.
Posted by Jim Gandy at Friday, February 24, 2006 No comments:

Another good turn out with 5 players Starn, Chris, Doug, Aggro & mike a player from Saturdays Napoleonic/warhammer crowd.Due to a severe lack of Allied opponents we decided to play a blue game. Maybe Nazi sympathisers vs regular army.We diced on the new improved table and got a breakthrough scenario.Chris attacking Fallschirmjager (Ground Force) vs. Starn defending Grenadiers.One Fallschirmjager Platoon was kept off table for the flank attack.Starn did a forward deployment along both sides of the quarter the Fallschirmjager were deployed in.Fallschirmjager deployed 2 platoons on left, command in central broken ground, Marders and HMG's holding the right village, Light guns in support of centre.Although it looked tough at the start the 2 platoons of Fallschirmjager advanced taking out a grenadier platoon, rocket battery and an 88 battery for the loss of one Fallschirmjager platoon. The artillery and Mortars kept the rest pinned or smoked and the HMG's did similar on Chris's right.The Grenadiers had some affect weakening the Command platoon in the centre and killing 2 of the HMG stands, which were in a village. One Marder was destroyed before the 88's were taken out.The Tiger did very little except rush back to defend Starns objective, it did kill a couple of reserve infantry stands when the Fallschirmjager reserve came on.A 5-2 win to Chris's Fallschirmjager with Starn failing company moral on turn 6.Conclusion: 1/ The grenadiers inferior moral had some affect on the game. 2/ Having 450pts tied up in air that didnt show and a tiger that did very little, gave an effective 1050pts vs 1500 which told in the end.still a fun game as always with 3 onlookers. No pics sorry no camera!!! Sob sob
Posted by Jim Gandy at Wednesday, February 22, 2006 1 comment: 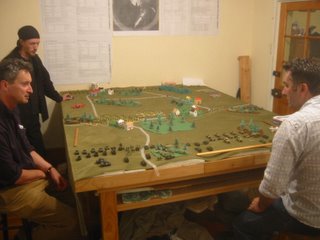 SteveJ attacked Mark on the US left while Jim attacked SteveP on their right.

SteveJ received a setback when Mark's A/tank guns dropped out of ambush in a wood close up to his Honeys & blew them away. A desperate fight then ensued for Mark's forward objective.
On the other flank, SteveP's pre-emptive strike with 7 T34s looked good for a while, but was destroyed by Shermans, Lees & SP105s.

Jim's Honeys bounced off the infantry but then went around it with the Shermans. This flank attack looked decisive, but 4 SU122s came out of ambush and stopped it dead. Only 2 Honeys escaped back behind a ridge to safety.

SteveP went over to the offensive attacking with infantry & SUs. The Ivan infantry took out the Honeys and went on to assault the 105s, which just held on. The SUs got the 2IC Lee, but an infantry attack drove the SUs back.

By now SteveJ had got the upper hand on his flank and helped Jim out by finishing off the SUs with his M10s.

Mark's Coy failed morale to give the US a hard fought narrow victory.
Posted by Nick at Thursday, February 16, 2006 No comments:

A slow night tonight - does everyone have combat fatique from last Sunday?

Jim's Indians v. SteveJ's Panzer grenadiers in a Meeting Engagement.
The Indians got their reserves faster than the Germans, but didn't exploit it as they consolidated their force before attacking.
The Germans tried an infantry attack on their left against an isolated Indian platoon, but good shooting stopped it.
As the Indians made their move on their left & centre, the Marders destroyed the Valentines & the centre Indian platoon got smeered, but they took the heat while the left flank got up close & the HMGs got into position.
HMGs & Bugs bailed 2 Marders as the Left flank infantry attacked the Grenadiers. The Grenadiers were destroyed and the breakthrough assault finished off the Marders. Next turn the German HMGs on the objective were finished off by Bugs & HMGs leaving the Indian infantry in posession.
Posted by Jim Gandy at Thursday, February 09, 2006 No comments:

Camp Cromwell was again the mainstay of the Tourney with 6 of the 8 participants if we claim Chris from Fort Floriet. But there were some new guys, plus some no-shows & spectators who might make it next time.

Steve J showed he saves his best for the Big Occasion by winning again with his Grenadiers.
Chris came second overall & Best General with his Russian Horde (with no tanks).

Results as I remember them - please correct me if I'm wrong.

Table 1 Free for all.Doug's Finns vs. Starns Russians.A 5-2 win to Doug & his first win in FOW! and only the 3rd outing for his Finns.

Table 2 Dawn attack.Robert & David (newbies) Crusader Light Tank Squadron vs. Corinna German Grenadiers.The British made good use of the darkness to out flank the Germans with the 88's and Tiger being neutralised. The crusaders swept around the Germans right flank using smoke to neutralise the tiger and an 88 when dawn broke on turn 3.The Crusaders overran the 88's and Nebilwerfers with minimal losses. The Crusaders then got a bit side tracked mixing it with the tiger and bailing it. Which had little effect as the crew jumped back in.Planes came frequently in spite of both sides having them, eventually a 4-3 win to Robert & David.
Posted by Jim Gandy at Tuesday, February 07, 2006 1 comment:

1. Mariusz's Poles attacking Peter's DAK in a Breakthrough.
The DAKs cries of "DOOM!" started on turn 1 & didn't let up much.
Mariusz actually had some PBI in his army this time, but seemed quite pleased that it didn't even turn up from reserve.
A good win for the Poles (just 1 platoon lost).

2. Steve I's Falshirmjager v. Jim's Ozzies in a Death From Above.
Two armies of Fearless vets can find it hard to kill each other from a distance. But it sure gets deadly when they get in close (noone runs away).
The Huns lost a few in crash landings, then were whittled away by the Valentines & infantry counterattacks.
The Germans ended up relying on holding on with their survivors hoping the Luftwaffe could win the battle.
But the Breda's managed to hold the Stukas at bay long enough for the Ozzies to win the game.
They had to kill every last Hun to do it & lost heavily in the process.

3. Steve II's Russians v. Mark I's Grenadiers in a Dawn Attack
Dawn Attack is a FFA which starts in the dark.
Both sides attacked on their left. The KVs were held at bay by big A/tank guns, but the Ivan swarm got their objective a turn before the Huns got to the other one.
Another Commo victory.
Posted by Jim Gandy at Thursday, February 02, 2006 No comments: 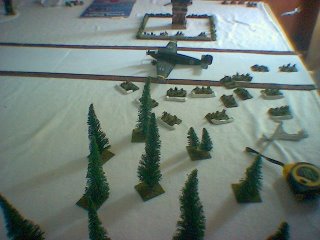 Snow rules were in effect. A beautiful snow covered table with pine forests & a large airstrip with a Junkers 52 and Stuka as the rear objectives, a bridge and ice cream shop were the forward objectives and you guessed it the Ivans went straight for the ice creams!!!!

The defenders deployed the 2 companies next to each other Fallschirmjager on the German left and Grenadiers on the right.

The Russians launched their attack on the German left led by the T34’s & followed by the T70’s (whose command tank got bogged in snow first turn and didn’t unbog until turn 4. Then some Russian infantry followed by Matildas, KV’s and SU 122’s etc.

The Russians had limited air support in the form of Sturmoviks, which came 3 times in the first 6 turns only destroying a German vehicle 7 limbered rocket launcher, on turn 5 the Sturmoviks decided to attack their own troops much easier targets! But were vigorously waved off by the frantically waving Ivans no harm done there. 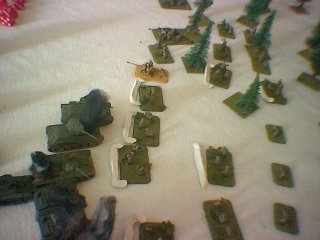 The T34’s tried to assault the Fallschirmjager’s position but after 2 turns there were 10 dead T34’s in exchange for 2 Pak 38’s and their command stand.

Turn 6: The Ivans again payed the price for focusing the attack as it was on a narrow front slowing the advance. The 7 operational T70’s were forced to attack to prevent a loss and picked off an isolated infantry stand.

The Ivan generals conceded defeat, as they would not be able to reach the rear objectives in time due to their column like deployment and slow progress destroying the Fallschirmjager. The Ivans were about to lose most of their T70’s to AT fire from the Fallschirmjager’s Pak 40’s & the remaining Pak 38.

Conclusion: Attacking on a narrow front prevented the Ivans bringing all their firepower to bear in the early turns. This also slowed the deployment of the Ivans, as Doug didn’t want to bring his troops on due to over crowding creating a target rich environment.

The Ivans attacked the stronger side of the Huns defence and couldn’t switch to a plan B due to the snow restrictions, which hampered movement.
Posted by PanzerIII at Wednesday, February 01, 2006 1 comment: