As Xmas was on our usual Tuesday we convened on BoxingDay afternoon this week to have a second go at Cruel Seas.
Game 1: 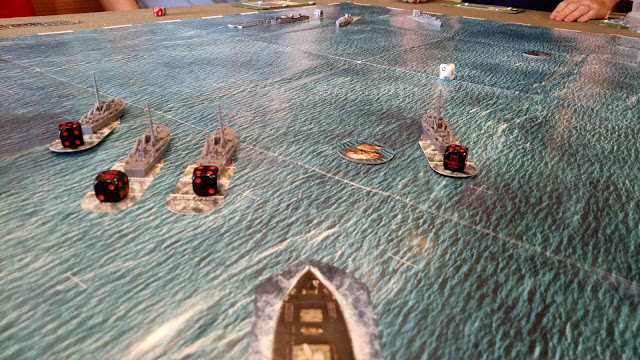 Four Vespers are escorting a freighter with 3 E-boats attacking. 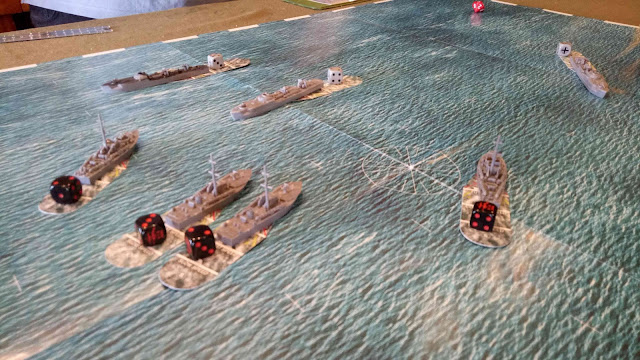 The E-boats split up. 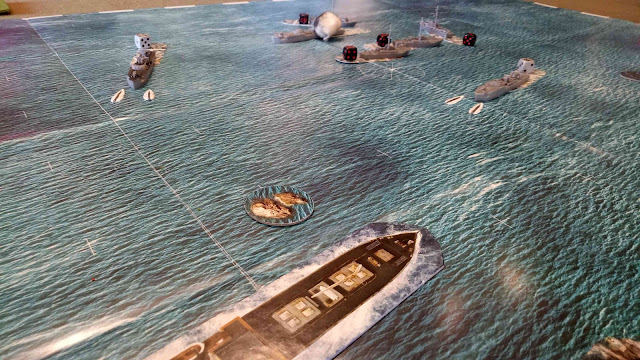 While one E-Boat gets sunk in the centre, the flanking boats get past & launch torpedoes. 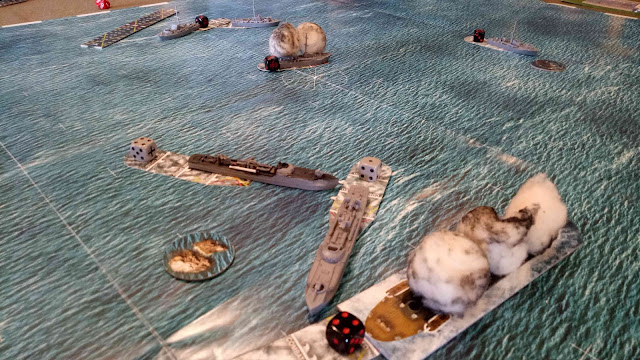 The freighter skillfully avoided the torpedoes, but the E-Boat's guns throw plenty of 6's & the freighter is sunk by gun fire before the Vespers can turn back to help her. 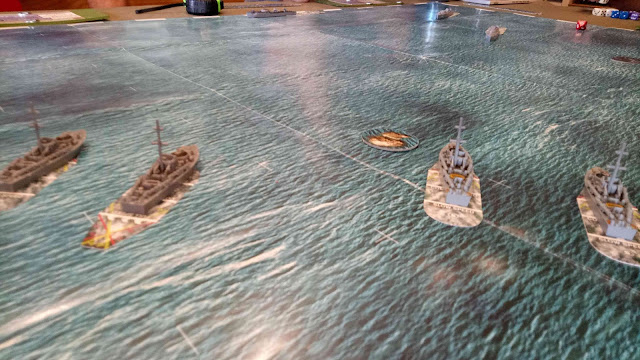 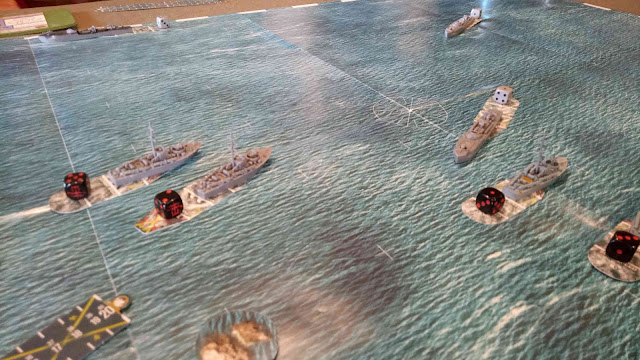 One E-boat takes on the Brits head on, while one lags back & the other goes on a high speed flanking run.  It didn't look like good strategy, but E-boats are tough & the bunny survived & then the pincer took out 2 Vespers.  The survivors then conceded the fight & ran for it.

We enjoyed the games, but are looking forward to getting some bigger boats.  Torps are fun, but the MTB's can't be hit by them (too shallow draft) so you need some bigger boats around to make them useful.  We decided that the points system needs tweaking.  In the MTB action the Brits seemed totally outclassed even with similar points - but they had to pay 40 pts each for 4 torps which were totally useless in the scenario, whereas the Germans could choose to have only 2 torps each & waste only 20 pts.  Also the German 37mm guns cost 10pts, the same as the Brit twin 20mm but while they have the same firepower, they have range 70cm cf 50cm.

In the first game 2 E-boats attacked a British Freighter escorted by 3 MTB's.   The tanker took a torpedo hit which almost sunk her, but the two E-boats were sunk before they could finish it off. 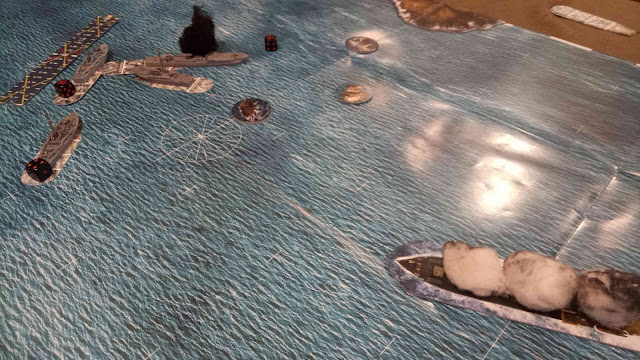 In the second game 3 E-boats escorted a freighter while 5 MTB's attacked it. 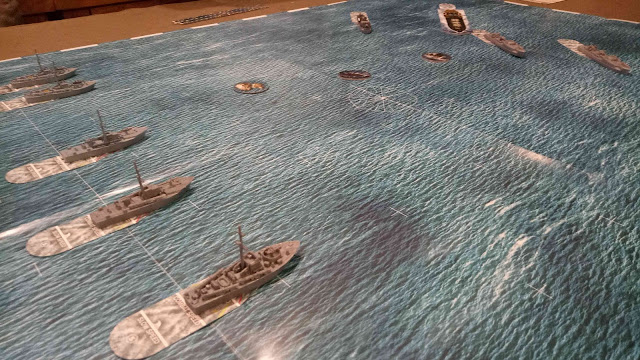 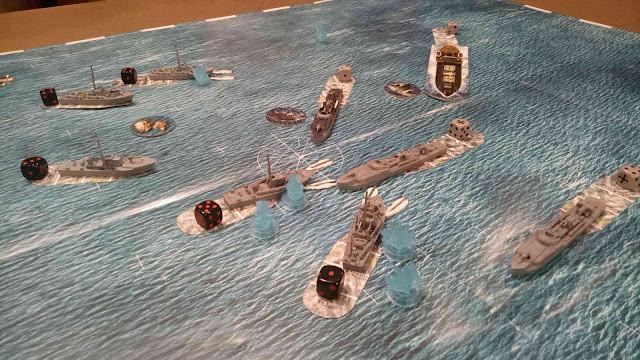 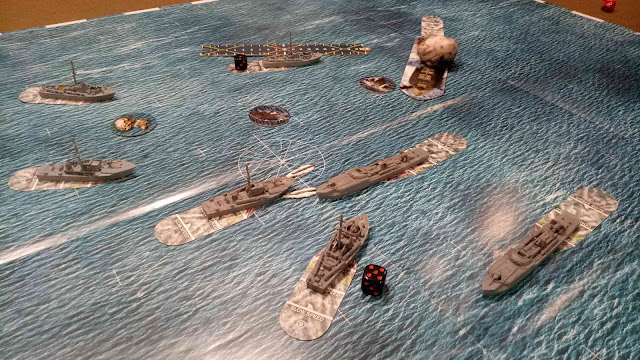 This time the attackers got 2 torpedoes into the freighter & sank it.

As none of us had played Cruel Seas before we were feeling our way with the rules & systems, but even so everyone enjoyed it.  It is not a complex game & easy enough to pick up & play.  The rule book is pretty, as always with Warlords, but also reasonably easy to use with a QRS & index, though the QRS could be improved with less pictures & more information.  The models are cute & a good scale for the small ships it is intended for, & the game looks great.   The dice in the bag system for actioning boats one by one works nicely as it does in BA.  The movement system is simple, but provides scope for skill.  The combat mechanisms are simple but effective with scope for skill, but also a lot of luck involved.  The ship cards with stats for recording damage work ok.  It's an exciting little game with the sort of efficient mechanisms & suitability for team play that we like - in the same vein as our Modder Fokker, Men o' War & Dreadnought rules.  Our first impressions were good & I think it may become a regular addition to the Camp Cromwell menu.
Posted by Jim Gandy at Wednesday, December 19, 2018 2 comments: 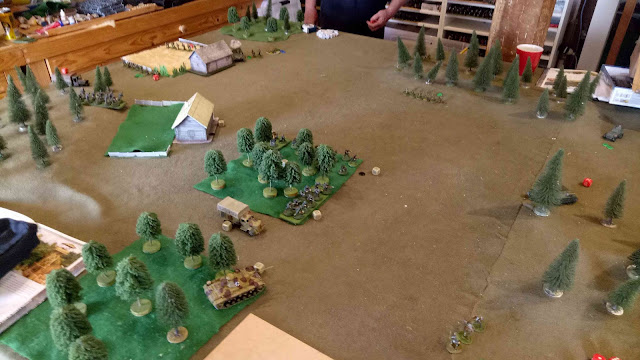 The Germans started with a light gun & nest of LMG squads in the wood & farmhouse near the centre.  The Soviet first wave came on from the far side of the table. The German reserves were all brought in on the near side of the table to reinforce the first line.  The Soviet reserves came in from either flank.  The Soviet advance was too spread out against a tight defence which allowed the Germans to pick their units off one by one. We called it off after turn 5 when the kill ratio was 7 Soviet to 1 German.
Posted by Jim Gandy at Sunday, December 16, 2018 No comments: 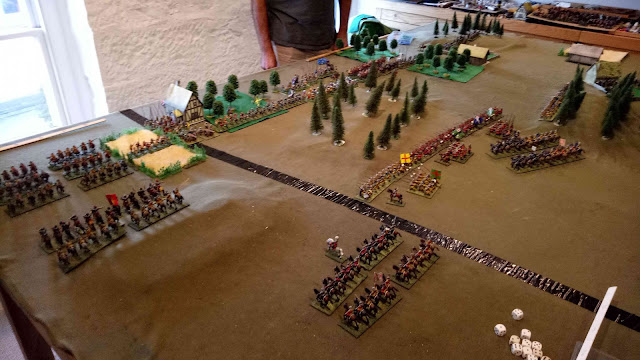 The Scots are on the far side.  The Englisg are attacking in echelon leading with their cavalry on their left. 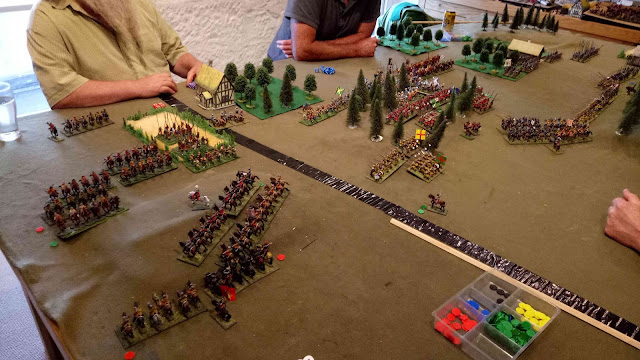 The charge of the leading English cavalry brigade was shattered in a hail of 1's & 2's, but they had a second cavalry brigade to renew the attack.  In the centre the English have met the highlanders. 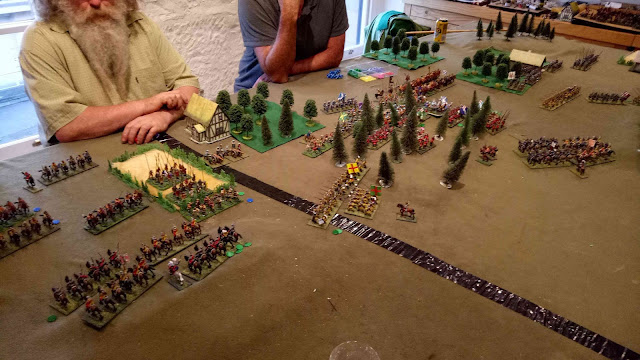 The 2nd English cavalry brigade is now gaining the pper hand.  An infantry fight rages in the central wooded hill.  Cavalry from both sides advance on each other in the centre.  On the far flank both sides are cautiously advancing. 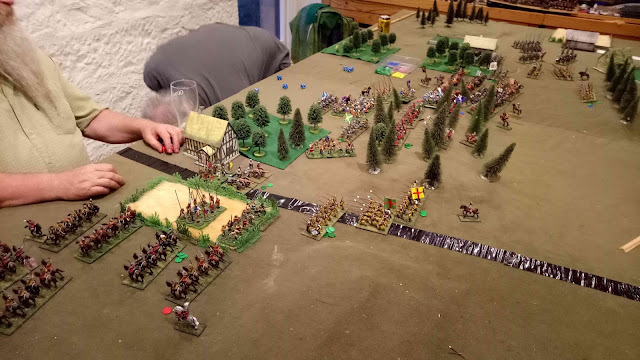 Fighting rages all along the front. 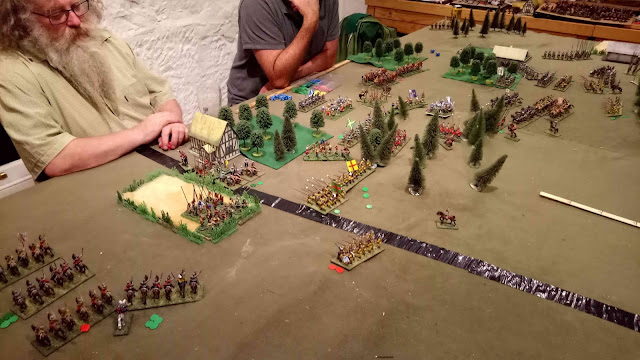 The Scots cavalry is now broken on the near flank as casualties mount all along the line with no decisive results. 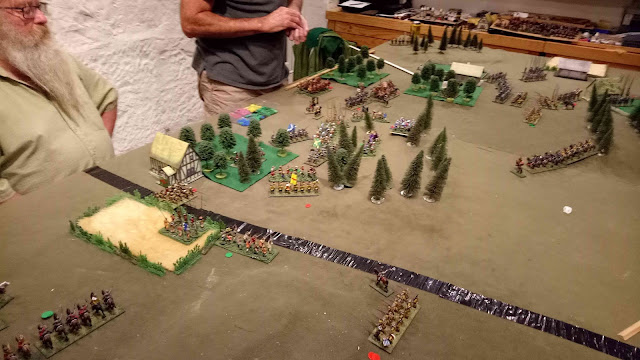 The English cavalry on the left seem content to rest on their laurels as English pikes over-run the guns & their suporting pikes beside the farmhouse.  The Scots have gained the upper hand in the central wood.  The cavalry in the centre have bashed each other to a standstill.  The far flank is still indecisive. 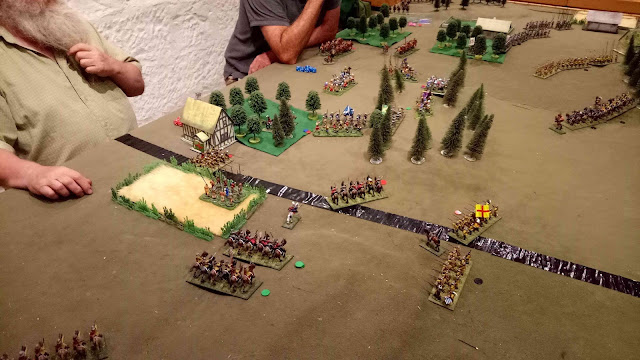 The Scots right is now under pressure now the English cavalry have finally moved to support their infantry, but the English centre is a mess & the far flank still not looking like a result.  With nightfall approaching the players agreed to a draw.

The English plan of breaking the Scots right with their superior cavalry & rolling up their line was thwarted by the cavalry taking too long to wipe out the Scots cavalry & to move right, plus the good performance of the highlanders in the centre.
Posted by Jim Gandy at Wednesday, December 12, 2018 No comments:

Both sides had 3 infantry brigades of 4 regiments & a gun & 1 cavalry brigade of 4 regiments.  Cards were used to provide a random start location for 1 brigade & random arrival points for the others (somewhere on their rear table edge or 1/3 of the way down each side edge).  The reinforcements arrived FOW style on a throw of 5 with 1 dice turn 1, 2 on turn 2, etc.   Each side knew at the start where their own reserves were coming from, but not where the enemy's are coming from. 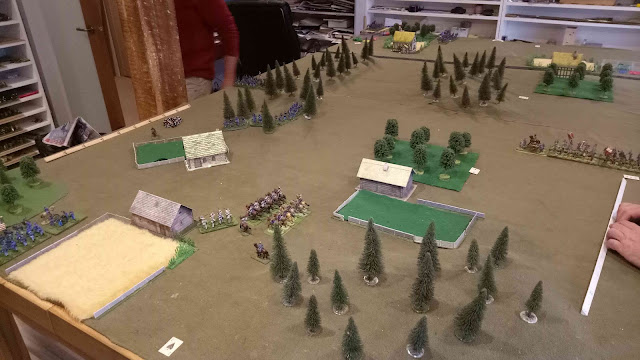 The Rebs are on the right in the pics.  Both sides started with their cavalry on the table just this side of centre.  The Union dismounted on the wooded ridge. The Rebs moved to the left & seized the house on their left.
By turn 3, the Union had all 3 infantry brigades coming on, one on each flank & 1 in the cntre.  The Rebs still only have 1 infantry brigade coming on, behind their centre. 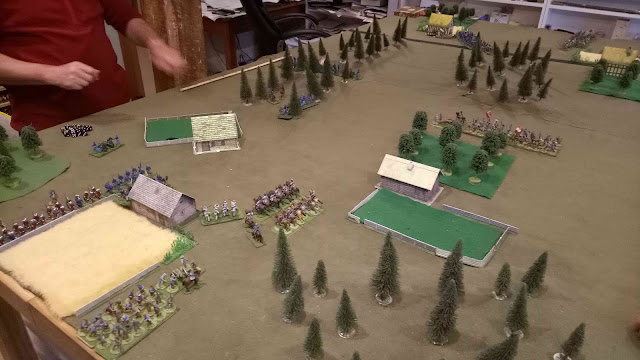 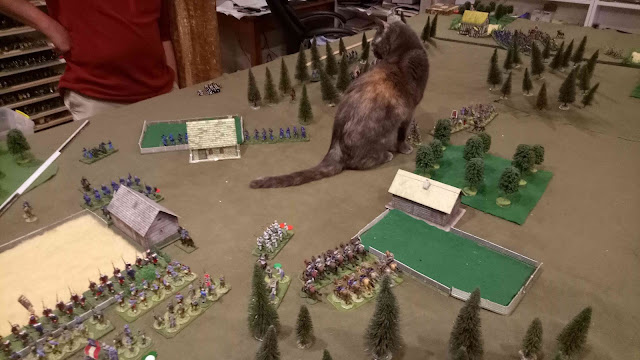 On the near flank the Union have attacked though the farm yard driving the Reb cavalry out of the house.  The Rebs have counterattacked the Union Zouaves in the farmyard.
In the centre both sides are still  deploying.
On the far side, the Rebs made up for late arrival by good command dice & charged home on the Union brigade while it was still in column of march. 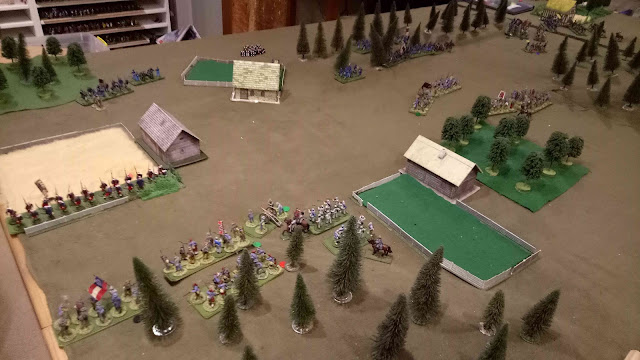 On the near flank the Reb counterattack has been beaten off.
In the centre they are still deploying.
On the far flank the Union brigade is in deep doo doo, but still hanging on. 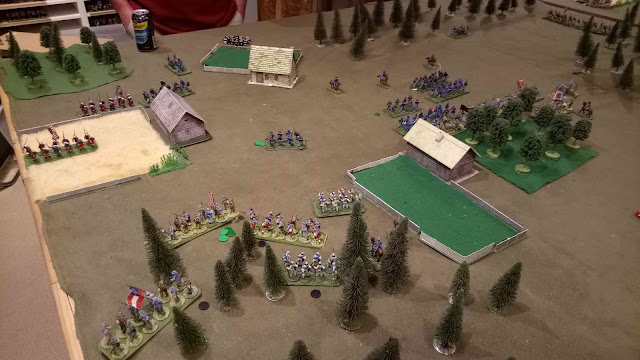 On the near flank the Rebs pulled back to the woods to regroup but the Union declined to follow up.
On the far flank, the Union brigade has broken & the 2 Reb regiments still in good shape are advancing on the Union centre's flank.
In the centre the Union have launched a desperate attack with infantry & dismounted cavalry to try & pull off a win before they were outflanked.  But the Rebs had pulled back to the orchard line & held them off.

At this stage the Union decided that their position was hopeless & conceded the battle.

The Rebs were certainly lucky with a critical command roll on the far flank, but the Union were also lucky in getting their reserves on faster.  The Rebs made the best of their luck on the far flank while the Union didn't exploit their advantage on the near flank.  The Reb's timely change from attack to defence in the centre in anticipation of an Union attack before they could be flanked was the winning move.
Posted by Jim Gandy at Thursday, December 06, 2018 1 comment: