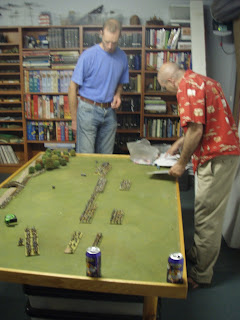 Cameron refused his centre & attacked both flanks of the Frank line with cavalry as it advanced. His flank attacks defeated Nick's flank guards, but did not stop the charge in the centre which smashed the Byzantine line to gain victory. 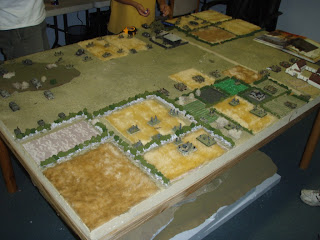 rmour (8 mkIVs & 1 Tiger) in a long line centre & right. Neblewerfers & SPAA were in support behind.
The Canadians put infantry on both objectives, 6pdrs in the centre, armour, bugs, wasps & Priests on the right & M10s in reserve in the centre.

The Canadians advanced with their armour on the right & defended the rest of their line.
The Germans dug in on the LH objective and advanced their armour.

The MkIVs in the centre took out the wasps but then got destroyed by the Shermans & 6pdrs. 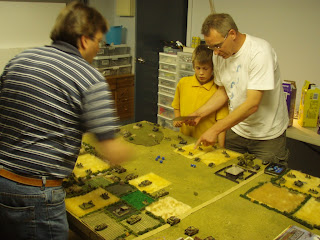 The Shermans & bugs continued on through the hedges to attack the objective covered by the SS. On the other flank the MKIVs & Tiger destroyed most of the 6pdrs then engaged the M10s. The MkIVs gradually melted away, but they took all but one of the M10s with them while an air attack got past the AA to get the Tiger.

On the other flank the Shermans attacked the SS. The SS fell back from the first attack, but the hedges took their toll in bogged tanks. A counter attack through smmoke destroyed the Shermans & the bugs.

Both sides now had beaten off attacks & had no objectives under threat, but had heavy casualties. The Germans had also lost their commander & all their tanks. The surviving Canadian armour, 1M10 advanced on the undefended objective in the centre. The SS moved over to contest, but the M10 got there first & when the SS failed tank terror held it to win the battle.
Posted by Jim Gandy at Saturday, February 28, 2009 No comments: 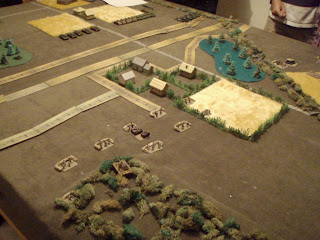 The Germans suffered badly in the preliminary bombardment losing half their artillery & anti-tank guns. It got worse on turn 2 when the Sturmoviks got the King Tiger - a cause for much cellebration on one side of the table (see pic 2)& equal despair on the other. On the other hand, the Russians lost a few tanks on the minefields & to the surviving 2 105's as they advanced. 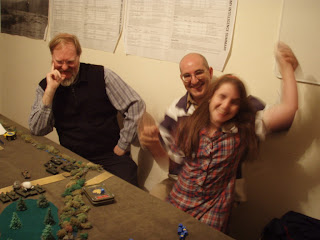 The German reserves were slow to arrive so the line looked awfully thin. The Marder ambush was put in the centre wood to face the large Sherman platoon, but shot badly, getting just one with 6 shots. Then when the artillery was finished off by the JS's & the lead one took an objective it looked all over. But the Germans had a card or two left. The 1 surviving Pak 40 was dropped out of ambush to contest the objective & 2 Marders survived return fire to hit back & force a morale test on the Sherman platoon (weakened in the minefields & by boggings in the woods). The Shermans failed morale & when the Commander tried to rally them he failed too. The only German reinforcements to show up, a Grenadier platoon, had shrugged off the Sturmoviks & was now able to support the Pak 40 on the objective near the JS's. Suddenly the Germans had a sniff.

The 5 Shermans on the right now attacked the 1st Grenadiers on the other objective while the JS's backed off from the 2nd Grenadiers & finished off the last Pak 40. The 1st Grenadiers had a Panzerfaust & support by HQ with 2 Panzerknackers, so it was a fair fight, but the German luck reverted to form & the Shermans took the objective.

The Germans had one last chance for victory, the 2 surviving Marders moved to the edge of the wood for side shots on the last 2 JS's. They needed a bail to force a morale test on the platoon, or 2 kills to destroy it - as the Russians had already lost their commander this would have meant Coy Morale failure & a German victory. They got the two hits, but the JS's threw 2 5's to save & the German miracle comeback finally petered out.

With the Germans decimated by the preliminary bombardment & the air strike on their KT on turn 2, it had then looked like it was only matter of the Russians going through the motions. But the ambushes, weakened as they were, plus a bit of luck swung the game back into the balance. It goes to show that if you have a sound plan & hold your nerve, there's always a chance of getting out of jail in FOW.
Posted by Jim Gandy at Tuesday, February 24, 2009 No comments: 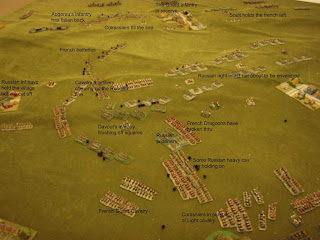 Eylau was set up & played solo as an exercise to refine the rules for the 6mm Napoleonic figs (for which enough figs have been repaired & rebased). This scenario was fought without special weather rules as a what-if.
Davout's attack on the Russian left was properly supported by Murat while Augerau pinned down the Russians frontally. While Augerau's attack was beaten off by the Russian batteries as in the real thing, by the time they had done so Davout & part of Murat's cavalry was in their rear, while the rest of Murat's cavalry was on the flank of the line with massed batteries in support.
The exercise demontrated that if the weather had not made it impossible for Napoleon to coordinate his forces he had the Russians on toast.
The pic (taken from Davout's flank) shows the situation after we had played another French turn as a rules training exercise though the Russians clearly should have pulled out before this.
Posted by Jim Gandy at Tuesday, February 03, 2009 No comments: