We fought two FOW 1500 pts FFA, each with a beginner v. one of the old lags. Both battles were decided by a stroke of luck at the end. 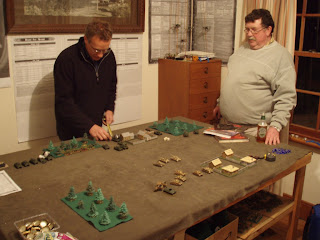 Barrie failed his Marder shuffle & his Marders & most of his MkIVs evaporated on turn 2, but the Stugs stormed on towards the objective past many burning Russian tanks. They reached now undefended objective but the loss the last MkIV forced a Coy morale test. Barrie failed it and lost the battle.

Tim attacked while the US were content to defend. On his right Tim engaged the Shermans with MkIIIs & HQ. On his left more MkIIIs advanced udner the covering fire of his Tiger. His 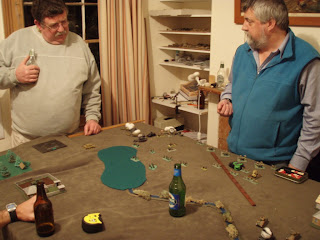 Infantry advanced in the centre.
On the right the Shermans eventually prevailed destroying all the Panzers for the loss of just one Sherman, but the battle was decided on the other flank.
The MkIIIs mowed the defending GIs down and quickly reached the objective. M10s & 57mm a/tank guns rolled over the ridge to contest it. The MkIIIs were destroyed but they took some M10s with them & the Tiger took out the rest. The Panzer Grenadiers then assaulted the a/tank guns. They destroyed all the guns, but John Wayne was playing the platoon commander - he passed morale & counterattacked. The panzergrenadiers fell back, then failed morale. This left the Germans with just 1 platoon and no HQ so they automatically failed Coy Morale giving the US a lucky victory.
Posted by Jim Gandy at Wednesday, April 30, 2008 No comments: 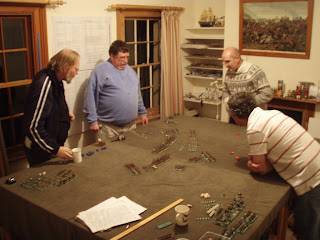 Antigonus & Dimetrius deployed the usual way with their phalanx in the centre & cavalry on the wings & light troops in front. imetrious commanded the right.

Seleucis & Lysimacus were a bit more daring. They put their phalanx on the right angled towards the centre with cavalry on each flank of it, light cavalry on the left and elephants and light infantry in the centre supported by peltasts behind & charoits on their right. Lysimacus commanded the left.

Dimetrious made short work of Lysimacus’ light cavalry. Lysimacus’ elephants were beaten off by the phalanx in the centre, but had inflicted significant casualties – mostly by being beaten then having random stampedes go in fortuitous directions. Seleucus’s chariots made a bit of splash before being stopped by peltasts & on their right, the Asiatic Heavy cav disposed of Dimetrious’ few elephants with bowfire.

Eventually the Seleucid phalanx made it diagonally across the field to the centre front. Antigonus’ phalanx started better than Seleucus’ but the elephant casualties more than evened them up. Nevetheless the phalanx v. phalanx can be indecisive & the two locked up while the battle was decided on the flanks.

Lysimacus was killed leading a charge & Dimetrious got the upper hand against the peltasts & cavalry on Seleucus’ left. On the other flank, Antigonus’ personally lead his Companions to beat Seleucus’ (Seleucis was busy elsewhere with his co-commander dead), then finished off the Asian horse as well.

Seleucis’s losses on his flanks now caused army morale failure. Even though his phalanx was intact, it now had no support and was doomed. 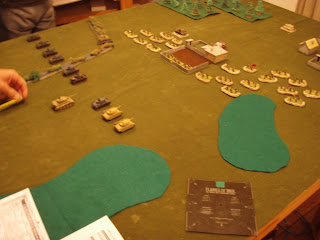 The Russian army looked a good choice with Sappers to dig in, 4 57mm a/tank guns in ambush & T34s, Stuarts & KVs to come on. But it all went pear shaped when the ambush achieved only a couple of bails. The other MkII platoon quickly over-ran the objective before the Russian tanks could intervene.

Undaunted, the Russians challenged the Germans to another one with roles reversed. But they did no better in attack, the field was soon littered with burning T34s, as the Tiger sat back & did its pillbox trick.
Posted by Jim Gandy at Wednesday, April 23, 2008 No comments: 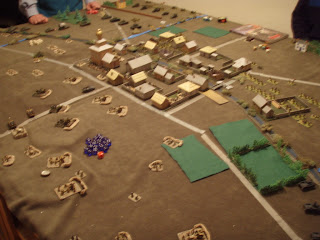 On their right the T34s mostly survived the Pak40 and attacked the Fucilieri at the ford only to have the lead tank bog down and block the ford.

At the right hand bridge the Pioneers finally cleared the minefield & the Strelkovy charged across the bridge. But the Fucilieri in Isdonisgrad drove them back.

On the left the KV failed to unbail and was finished off by the 88. The Strelkovy unpinned & crossed the river. They beat the Grenadiers and wiped out the Heavy Mortars before they failed morale under the fire of the MkIIs (dropped out of ambush) & a storm of artillery.

On turn 6 the 2nd Grenadiers finally started to come on on the Russian left flank. Now outflanked, with no troops over the river and the Axis artillery now free of threats & able to plaster anything that moved, the Russians had no alternative but to retreat. The pic above shows this stage of the battle - the Fucilieri still hold the far ford & the bridge on the far side of Isdonisgrad, the Strelkovy next to Isdonisgrad are evaporating under a bombardment form 4 batteries, the MkIIs are advancing on the right, and out of frame 2 Platoons of Grenadiers have come on behind the Russian left. 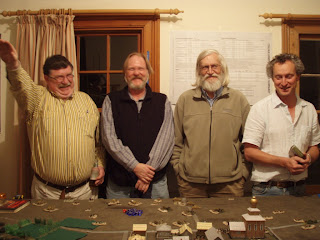 It wasn't necessary to play through the next turn. The Russians admitted they had nothing to stop the 2nd Panzers storming in to Sharapova and achieving their victory condition and the conceded the campaign.

We want campaigns to 1) produce interesting battles, and 2) reach a conclusion and not peter out. This one passed on both counts. I though it was a great campaign & enjoyed it greatly. Of course being on the winning side also adds to one's enjoyment. The Ruskies put up a sterling fight, but the Axis army had a significant advantage in mobility that eventually their leaders were able to exploit - forcing the Ivans into a desperate frontal attack on Isdonisgrad. The Russian attack in the ultimate battle had no luck - they failed to break through the thin line of Fucilieri on the left flank and that bought the Axis enough time to bring up their reinforcements to put the result beyond doubt.
In the pic the Axis staff - Hauptmann Macdonald, Capitano Combs, Generali Gandini & Hauptmann Jendrich celebrate their victory.
Posted by Jim Gandy at Tuesday, April 15, 2008 No comments:

Having set up last week we were able to get straight into it. Progress was a bit slow due to lack of manpower on the Russian side - just Nick & Tim with all that tin to move - whereas all 4 Axis players were there.

The Axis deployed Grenadiers on the right, Fucilieri on the left. They were Dug & GTG with enough engineering to put an anti-tank ditch in front of both bridges & a minefield behind them. They also had ambushes in hand & lots of batteries though most of them were half strength.

The Russians attacked the two bridges either side of Isdonisgrad with Sappers supported with Strelk. Militia advanced on the Italians holding the ford on their right. On their left a KV flame tank lead a Guard Strelk towards that ford. GODs were set up in right rear & heavy mortars left rear.

In the centre the Sappers did not have the luck they needed. The ones on the left never got to grips with the Grenadiers and melted away under the Axis bombardment. The ones on the right did at least get across the river for a moment before the Fucilieri threw them back.

On the Russian right the Miltia made it to the ford but were thrown back by the Fucilieri then failed morale & ran away under the bombardment of the Itie mortars.

On the the Russian left the flame KV crossed the ford and drove back the Grenadier Platoon defending it with heavy loss thought the Strelk were held up, pinned by artillery. An 88 ambush plus artillery batteries pounded the KV & bail it, but the Grenadiers didn't unpin & couldn't assault 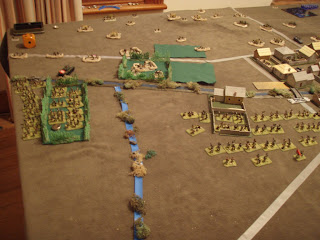 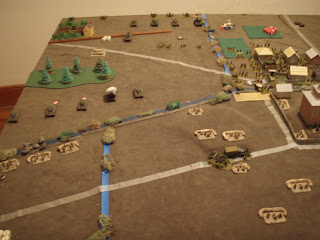 finish it off.
The pics are at the end of the night - the first pic is from behind the Russian left flank, the second from behind the Italians on the Axis left.
Posted by Jim Gandy at Wednesday, April 09, 2008 No comments:

It was new guy Tim's first FOW battle, but he got plenty of tactical assistance from the spectators. James deployed his anti-tank badly allowing Tim's armour to over-run his left flank.

In the Russians Turn 8 of the campaign they renewed the assault on Isdonisgrad. We spent much of the evening setting up the battle. A Grenadier Coy & a Fucilieri Coy, both depleted in the two previous battles for the town, are dug in behind the Isdonis River with Isdonisgrad in the centre of their line. The two bridges have anti-tank ditches in front & minefields behind. A horde of Russian Infantry is deployed ready to attack - a Militia Battalion and a Guard Battalion. Both sides are expected to have reinforcements of some kind available. Next week it starts in 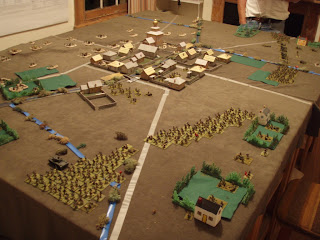 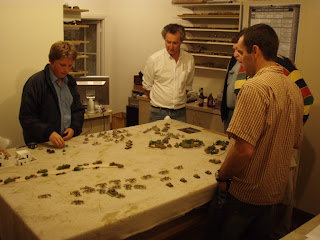