Both sides reorganised overnight after last week's battle (& dug in).
The Axis lay doggo most of the day waiting for the Carri to arrive.
On battle turn 13 the Carri came onto the field & the battle restarted.
The Semos & A/cars swung around to the right through the gaps in the minefields made by the FJs a few days back.
Most of the Carri swung to the left using the gap made for the LoS.
The Allies fought a delaying action & called in the Kiwis as reinforcements.
The close terrain & minefields made it slow going.
The Regio Aeronautica came twice & got 2 105s & a Sherman).
The Axis made some progress but night fell before any decisive result was acheived despite the slow arrival of the Kiwis.
Casualties are pretty close, though the Axis hold most of the contested ground.

Turn 1: Germans had first turn 105’s ranged in killing 2 bugs (the 3rd failed morale & scarpered) and bailing a Crusader while the Brumbars advanced left of centre.
The British ducked for cover while the Grants bailed a Brumbar.

Turn 2: The Germans got 3 planes (Aggros hot dice) and with the help of the Brumbars and artillery wiped out the Grants and a crusader platoon. Things were not looking good for the British.

Turn 3: The Germans got more air (2 planes), which although it wasn’t intercepted attacked the Germans own troops, but was waved off by frantic Brumbar tank crews.
The British managed to get some side shots on the Brumbars killing 2 out of 3 the 3rd passed morale.

Turn 4: German artillery bailed a Crusader.
The British 3 planes of their own payback time! They all tried to get the Brumbars but 2 flights ended up acquiring the 105’s instead, killing 2 guns. The final Brumbar was killed and Aggros dice were going cold.

Turn 5: Things had swung in the British’s favour the 105’s did nothing being a half battery now and re rolling hits. Some British tanks moved to take the Germans left objective and shot up a stand of Grenadiers in the nearby scrub.

Turn 6: Aggro realised that the British left hand objective was vacant and advanced his grenadiers on the double. His 2nd grenadiers advanced in the scrub to contest the left objective.

Turn 7: The British armour slowly shot the Grenadiers out of the scrub. So the remaining Crusaders shot and assaulted to get uncontested control of the objective.

In the pass the Brats were held at bay by the FJ's reaguard. They weren't game to advance in the face of dug in HMGs & 88s.
On the main front, the US tried to assault the Pioneers on the ridge but failed & fell back.
The last MkIII fell to the M10's and another MkIV* was over-run by GIs after being bailed by a bazooka.
The Panzer Coy failed coy morale when it lost the last armoured car (having lost HQ) and became pinned.
The battle continued untill nightfall with artillery bombardments & long range sniping which the Ities got the worst of. 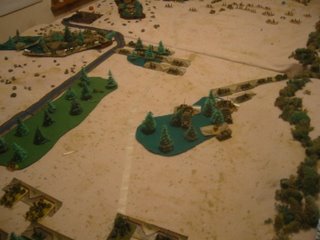 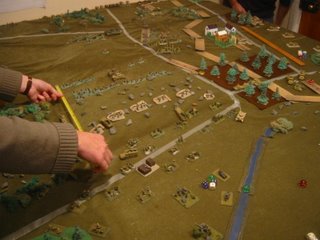 James playing his second game attacked in a hold the line. James attacked up the left killing the Russian 57mm guns before they could do damage. Corinna sprung the Matilda ambush to replace the lost AT guns James then switched the attack to the right while his grants demolished the Matilda platoon over 5 turns at long range.

Unfortunately the SU 122’s and Russian hordes decimated the British Crusaders. The Brats lost their C in C and then auto failed company morale.
4-3 victory to Corinna.

This was the first time the French had taken the field at Ft Floreat. The first game was fairly short and savage – mainly because the dice god’s had deserted Starn big time, and the quick snatching of the objective by the M10 platoon.
Victory to the French 5-2.

Replay FFA 1500pts
The re-fight turned out to be a fairly bloody encounter. The French were now the aggressor after their morale boosting first game win. French infantry advanced on both flanks, the M10’s moving around the town on the right flank to engage the Tiger and accompanying Panzer III. Successful hinting saw the Tiger bailed out, but the Germans quickly regained their composure and took out one of the M10’s (who failed their disengage roll). The remaining M10 stayed bailed for 6 turns and was repeatedly shot at by the Panzer III, taking several hits (12+) but the crew never left the safety of their vehicle until the final fatal shot (This vehicle is now being replaced by the newer Swiss cheese version!).
Seeing the destruction of their comrades the infantry holding the town advanced their bazooka teams in a determined effort to remove the two German tanks while the other M10 platoon systematically destroyed the Nebelwerfer battery and the 88mm gun that was protecting the right-hand objective. A quick dash by the M10 platoon saw one M10 destroyed by the now hunting Tiger, but they managed to neutralise all German infantry anywhere near the objective – making victory seem certain.
In the final turn, the Tiger, unable to see the last M10 fired at and destroyed a helpless jeep crew (failed to disengage – brave or stupid?), forcing the platoon to take a morale check. Fortunately their resolve never waived and they finally held the objective uncontested.
Victory to the French 5-2
Posted by Jim Gandy at Saturday, June 24, 2006 No comments:

Jim's Fucilieri v. SteveP's Russian Guards: 1500pts FFA.
The table was diced for using Za Stalina and was mostly open plain.The Russians had 2 Guard platoons, 5 T34s, Artillery, Pioneers & Limited Air.
The Ities had 3 small Fucilieri, Light Mortars, Med Mortars, HMGs, Light Art, Heavy Art, A/t & Guastatori.
The Russians attacked on their right with their strongest infantry with the tanks in reserve behind. On their left they put in a pinning attack.
On their right the Russians swarmed forward under a storm of ineffective fire. The front line Fucilieri evaporated on contact, but the Russian advance shuddered to a halt under the fire of the Light Mortars as the 1's & 2's started appearing in the Russian saves.
The T34s were spooked by the 75/39s and not used effectively & a Fucilieri counterattack finished off the Russian infantry & command.
On the Russian left their attack was stopped by firepower and finished off by a Guastatori counterattack.
The Russians failed Army Morale having lost 2 inf, pioneers & HQ.
The Sturmovics came only once and acheived little. The Heavy Artillery pretty well neutralised each other.
The Russians failed to use their armour effectively & Italian firepower that won day.
Posted by Jim Gandy at Thursday, June 22, 2006 2 comments:

In F7: MarkO's Brats have orders to pin down SteveJ's Falschirmjager in the El Lowez Pass.

In E6: Chris's Panzers are defending the FJ's Line of Supply against Barrie's US Inf & Peter's Brit Heavy Armour. The Panzers are heavily outnumbered, but expect support to arrive from the FJ, plus Bersaliglieri from D5.

In the pass, the FJ's 88's, 105s & HMGs discouraged any serious Brat advance while most platoons were moved back to help the Panzers.

Meanwhile on the other table, the Allies advanced quickly on their left and set up a barrier against the expected Bersaliglieri. On their right they made a limited attack to clean out the Neblewerfer's observer, but weren't game to go over the ridge at the Pioneers. They advanced armour & infantry in the centre, though the advance was limited due to the old Kiwi minefields.

The Panzers came forward and took on the Allied armour. Poor shooting by the Panzers cost them dear, but the US decison to move the M10s to the left to meet the Ities let them off the hook a bit and they fought back.

The US move to their right succeded in compromising the Itie deployment, forcing them to come on in a killing ground and run a guntlet of artillery & mortar fire.
The RAF came but once but caused serious damage to the Neblewerfers and a consequent hit by the 105s caused them to fail to morale.

We called stumps at the end of turn 6. At this stage losses are about equal. The Ities are on the table and the FJs are doing their withdrawal pretty well. But the Panzers are looking fragile & it's far from over with at least 6 turns to nightfall.

To be continued next Thursday.
Posted by Jim Gandy at Thursday, June 22, 2006 No comments:

Details of the battle are a bit sketchy but the SS Broke through and defeated the grenadiers in a narrow 4-3 victory.

Table 2. FFA 1500pts.
This was a first up game for these guys with Chris refereeing.
James Brat Light Armour vs. Mike Italian Bersaligari

A bloody first encounter the Italian armour advancing on both flanks the Brat armour moved to intercept. The crusaders with their 2pounders struggled but held their own vs. the Carri and Semo 47’s. A long slog, the Italians lost an infantry platoon, their Semmo 47’s and light 20mm tank things. The British lost 2 crusader platoons and a universal carrier, and another crusader.

As night fell over the battlefield both commanders decided to retire to lick their wounds. Both Generals enjoyed themselves and are hoping for a rematch next week.
Posted by Jim Gandy at Wednesday, June 14, 2006 No comments: 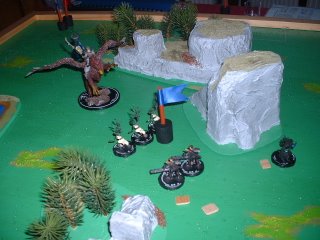 Cameron and Tristan vs Nick and Alex

Alex bought out his birthday present -- a 260 point beast in the skyguard griffen. Tristan had an army of hordes.

The Griffen moved up to do battle. A bunch of wood things approached -- and the griffen mowed them down with devestating arrow fire (see picture). Unfortunately, the 'red baroness' with gatling guns behind the wood 'things' then openned up and did serious damage. Alex could have pushed foward, but he decided to retreat and maneuver for a flank. While a good move, the baronesses (what is the plural for baroness?) managed to maneuver as well. The Griffen came from behind a hill, and proceeded to miss when shooting at the baroneese. They then replied, killed the griffen, and it was game over.

A fun quick game. Mage knight is fun for kids!!! 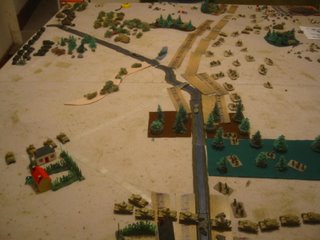 Overnight both sides were allowed a simultaneous 60cm redeployment (using sketch maps).
Barrie redeployed in a defensive stance - generally moving troops to the left.
Steve redeployed some of his Ities to the Axis right.

After some hesitation & general milling about, the serious action started when the Honeys moved forward to pick off some exposed armoured cars. Setting the tone for the night, Barrie completely missed hitting the A/cars. The Axis now woke up and rushed forward on their right. Infantry located the lanes in their own minefields and a Carri platoon and the Semo 47s advanced over the wire supported by the Dianas. The rapid evaporation of a/tank guns & Honeys caused a bit of a panic in the US camp. Infantry was withdrawn to safety and the Shermans sent across from the centre.

With the Shermans drawn away, the Axis now advanced on their left as well. The US Command Grant withstood countless rounds of 47mm before the Shermans arrived and saved it's bacon. The Carri & Semos were beaten off by the Shermans, but Dianas & Lancias beyond the wire precluded any follow up.

Meanwhile on the Axis left, the infantry found the path though the minefields to the ford & the Carri crossed the river & crushed a path through the wire. As night fell, the Carri reached the US Armour supply marker.

Casualties were not heavy, but nevertheless it was a decisive Axis victory with the US having no choice but to retreat into E2 overnight.

After recovery the total losses over the 2 days of fighting in the hex are: