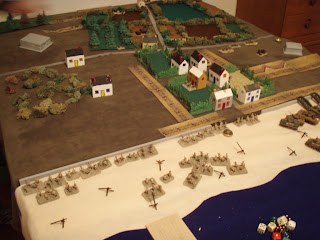 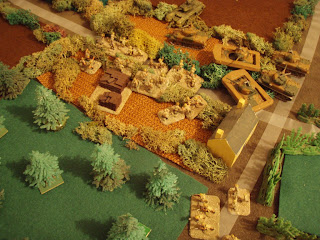 The hinterland was set up with lots of terrain, especially in the back half. So while the Germans had bocage to defend, they also had restricted fields of fire.
Nick put an 88 bunker well back on his left & a HMG bunker on his right protecting the front objective.
The Brits used the central village to hide their tanks from the 88 while infantry advanced on the left and took it out before swinging right to join a convergent attack on the rear objective. On Turn 9 a Rifle platoon took the objective. On turn 10 the tanks charged thru the bockage & despite 50% bogs destroyed the last Grenadier platoon to give uncontested posession. So finally, the Allies have won on the Beach ! It can be done !
Posted by Jim Gandy at Friday, April 27, 2007 No comments: 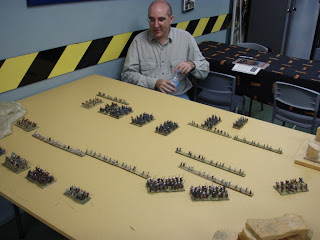 Nick & Jim (& SteveJ for a while) attended an Ancients day at Area 52.


We had a Tactica table & a Warhammer table & fought two battles on each. 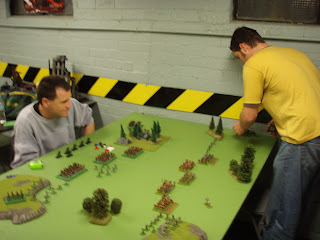 It was my first time at Warhammer Ancients. Like Tactica the rules seem a bit weird at first, but have some good ideas. I found that protecting your flanks, charging the centre & throwing 6's works so they are not without merit.
Posted by Jim Gandy at Sunday, April 22, 2007 No comments: 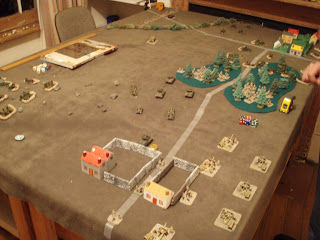 Steve probably chose the wrong quarters to defend as the Attackers could put one objective right out in the open & the other was on the same side of a wooded creek as the reserves come-on zone. The Brits kept the Huns busy with artillery and an an infantry probe through the woods waiting for the right time to strike. Their first reserves, the 3rd Rifles, came on on turn 3 but it was immediately pinned down by heavy fire from the Paks firing through the gap in the trees at the bridge & a Grenadier Platoon that had moved up to the creek line. The 3rd Rifles were all dead on turn 5, but by then the Churchills had arrived to take over holding the far objective. Simultaneously, the M10s & Bugs charged out from behind the woods towards the centre objective. The Paks were destroyed by artillery & M10 fire. The Grenadiers might have made a suicide charge at the Churchills, but there was no point as the Huns had no way of getting the Bugs off the central objective. An easy win for the Brits though only a 5:2 win on the dumb VP system.
Posted by Jim Gandy at Thursday, April 19, 2007 No comments: 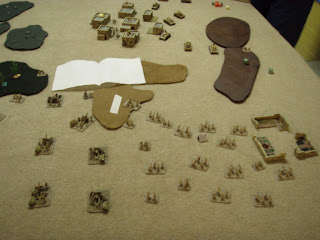 The DAK put their M14s & MkIIs in flank attack and had HQ + 2 three tank platoons (mixed MkIIIJ's & MkIVF1's) & Lorraine S's on the table.
The Indians had 3 Rifle platoons & Valentines ready to move onto the objectives, 2 RA batteries deployed with good fields of fire & Boffors right in the centre. As the DAK had no infanttry or soft vehicles, the HMGs & Mortar's only use was to deploy forward to force the DAK to deploy back a bit.

The Huns launched two attacks - the Panzers straight up the middle and the flank attack.

The Panzer attack came seriously unstuck when Agro lifted the smoke barrage off the Boffors to try & neutralise the 25pdrs. The Boffors, with the help of some side shots wiped out the lead Panzer platoon in one turn. Agro then decided more discretion was required & the other Panzers changed course to go round the hills on the left to avoid the same fate. The battle was over before they got back into the action.

The flank attack started well with the M14s coming first roll on turn 3 & the MkIIs on turn 4. The M14s mowed down most of the 3rd Rifles who had just got to the rear objective but not had a chance to dig in. The Valentines came up hull down on the ridge next to the objective. The M14s charged forward to get flanking shots. As they couldn't hurt the Valentines, the MkIIs attacked the 2nd Rifles deployed in support of the 1st rifles which held the central objective. The 2nd rifles beat the MkIIs off with moderate losses. The 25 pdrs now had long range shots at the M14s & MkIIs and began to slowly whittle them away. The MkIIs charged again. This time the 2nd rifles fought to last man then broke off. The MkIIs continued on to attack the 1st Rifles but were beaten off with heavy losses. It was now turn 6 & the game was now in the balance with a tank from each side within 10cm of the the rear objective - but both bailed. The M14 didn't unbail & the sound Valentine survived. The bailed Valentine didn't unbail either, but the remaining fighting one & the 25pdrs got enough hits to force a morale check on the M14s. The M14s failed morale & the 25pdrs popped the last MkII to force a Coy Morale Test - which the Germans failed. On the FOW scale it was a 6:1 win, which just shows how stupid their VP system is as it was actually a very close game.
Posted by Jim Gandy at Wednesday, April 18, 2007 No comments:

The Pergumenes held back their weak phalanx in the centre hoping their superior light infantry would weaken the Selucid phalanx as it andanced and that their cavalry could win on the wings. Their plan worked pretty well except that all their irregular allies who won promptly pursued off the table - but that was better than the Seleucid allies who generally lost & ran away. The Seleucid phalanx did lose a few going in but won anyway. The big hit against the Seleucids was losing their Argaraspids to a 2:1 attack by peltasts - that was 2 Morale points they couldn't afford to lose and Game Over.
I tried out a new Command System with no order writing but dice to activate movement. It worked ok, but I'm still not entirely happy. FOW has raised the bar high in the rules business.
Posted by Jim Gandy at Friday, April 13, 2007 No comments: 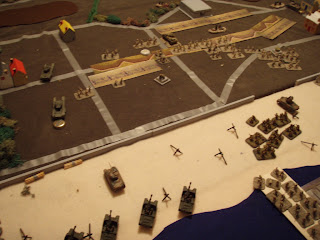 An 88 bunker dominated the ground behind the sea wall & although it shot badly, the wall & hard going slowed the advance of the AVsRE & Shermans enough so they had to die eventually.
The Infantry came forward in waves as always against 2 grenadier platoons dug in around HMGs & tank turrets. Mortars gave the Huns fire support & even though reduced to 2 by the Prelim Bombardment they did a lot of effective pinning on the crowds. The 105s were the first German reinforcements and they too did a lot of effective pinning (& killing).
The RAF was totally useless - didn't even get a pin all night.
Eventually the Grunts got the 88 bunker & the first objective, but the 2nd objective was too many missed unpins away.
Yet another minor German victory. I think I explained the scenario to Steve too well (I shouldn't have suggested that %&$#% 88 bunker).
Posted by Jim Gandy at Friday, April 13, 2007 No comments: 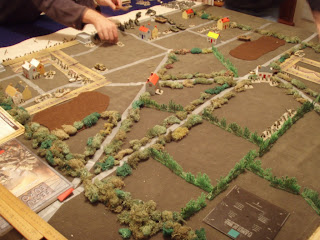 The Huns got off pretty lightly on the Prelim Bombardment in terms of losses, but then had a lot of trouble unpinning.
The smaller bunkers fell quickly but the 88 bunker was harder to get to and held out keeping the Brit armour huddled up the beach or behind obstacles.
Despite spending most of the time pinned down, Strongpoint COD held out pretty well - not falling until a combined Avre & Infantry attack under smoke cover on Turn 10.
The Allies had learned from last week that the rear objective is just as important as the close one and Nick pressed forward towards it on the left.
The Germans eventually remembered their artillery "Across the Volga" and it soon made itself felt slowing down the advance. The one HMG in Strongpoint Sole also caused a lot of strife (and lead a charmed life). German reinforcements were slow to come, but their Veteran Grenadiers & Scouts did arrive soon enough to reinforce the defence of the rear objective. With time running out Nick made a desperate attack. His Shermans got stuck in the bog. Infantry closed with the Grenadiers & forced a retreat, but then failed morale leaving only the M10s. The 2 M10s that survived the 88 & the artillery burst through the bockage and drove the Grenadiers off the objective on turn 11. The Germans had 2 chances in their turn 11 to take it back - the Grenadiers and the Scouts. The Grenadiers unpinned & counterattacked the M10s and this time won. The Scouts weren't required.

The Allies are learning. They almost won this time.
Posted by Jim Gandy at Thursday, April 05, 2007 No comments: