Jim, with help of his ally Mark is attacking Mike at Paeonia in attempt to win back the province lost in a surprise attack some years back.  Mike is slightly outnumbered and has chosen a position behind a river. 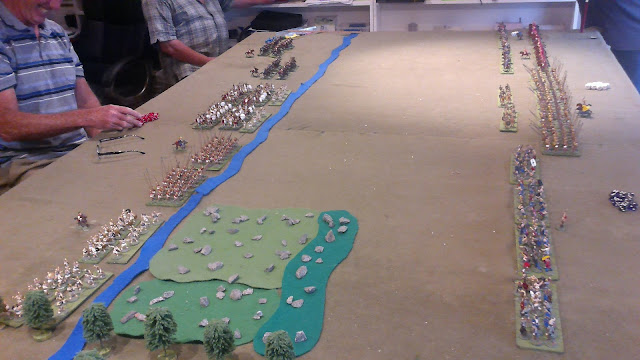 Mike is on the left with his 2 cavalry divisions on his left, hoplite phalanxes in the centre & a mix of phalanx & light troops on his right.
Mark's cavalry division is on the far right of the allied line.  Jim's phalanx is his centre with warbands on his left & his cavalry on his right.
Mike has the advantage in missile power having 2 bows, 2 slings, 2 light infantry & 4 light cavalry units compared with 2 javelins, 4 warbands & 4 light cavalry.
Renfrey assisted Mike with plastic pushing the cavalry & throwing sixes.  Chris umpired. 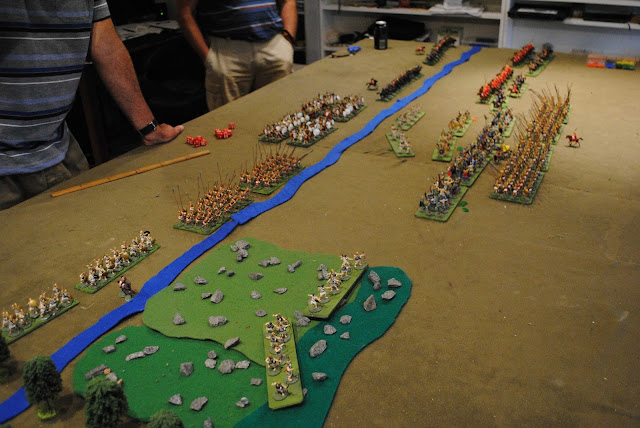 Mike has covered the river frontage with his close order troops & sent his skirmishers across the river. The allied cavalry has advanced to pinning distance from the river and Jim's arbands have been moved towards the centre in front of the phalanx. 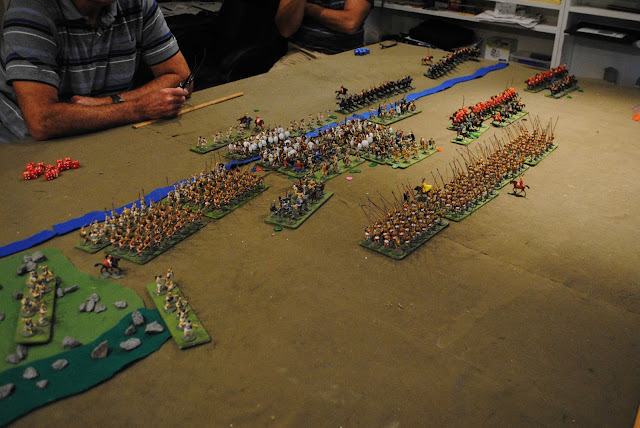 On the far flank the allied had advanced their light cavalry as skirmishers, but they were driven back by enemy fire.
In the centre Mike took the bait of the warbands hung out in front and crossed the river with his infantry to attack them. 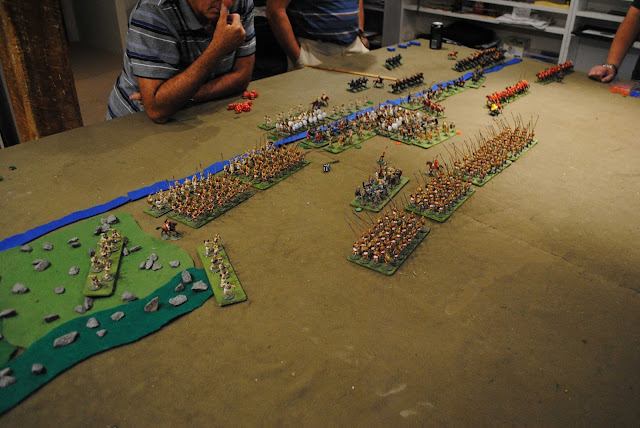 On the far flank Mark's attempt to renew the light cavalry skirmisher fight resulted in a blunder - his light cavalry charged over the river at the enemy heavy cavalry ans was immediately destroyed. In the centre one warband beat one of the hoplite phalanxes but another is in trouble.  An attempt to hit the winning hoplites in flank with cavalry fell one command pip short. 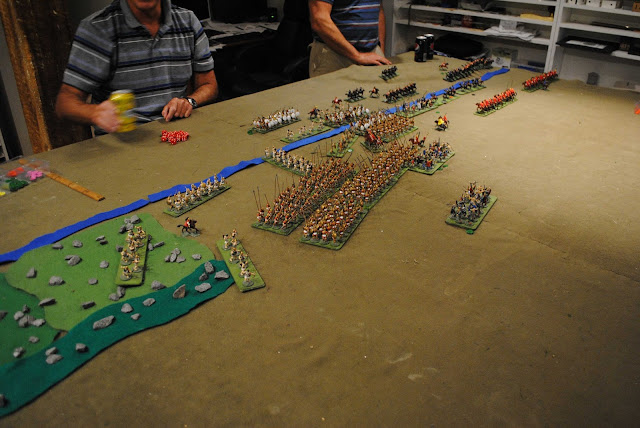 The cavalry is still either throwing javelins or just looking across the river at their opponents.  The hoplites broke the warband & rallied back before the cavalry could hit their flank.  The victorious warband was withdrawn to let the phalanxes get into the action. 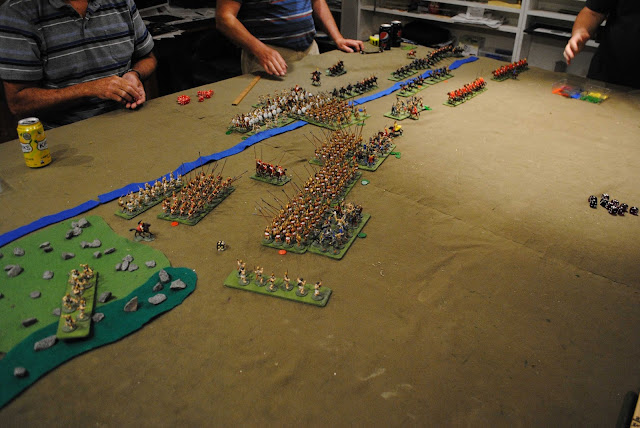 The hoplites have been driven back over the river by the RH phalanx.  Jim's phalanx with some help from the cavalry unit have broken half Mike's right flank division. 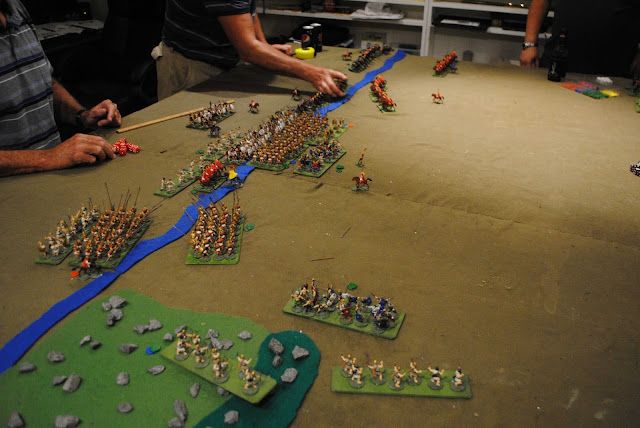 On the far flank Jim's light cavalry has been broken by javelin fire across the river, but the allies still have 6 heavy cavalry on the flank v. 4 heavy & 4 light & no one was keen to cross the river.
In the centre two phalanxes are pressing the hoplites at the river line supported by warbands.
Left of centre Jim's cavalry lead by himself right behind has crossed the river in the gap.
On the near flank a phalanx has been broken by bow fire & a warband is left as a pin cushion to protect the next phalanx. 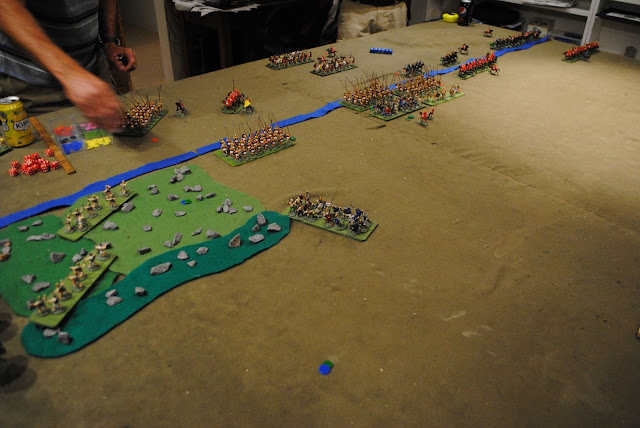 After a lot of frustration, the allies finally got some good dice - the cavalry in the centre charged & took out a light infantry unit to break Mike's right & the phalanx broke the hoplites in the centre and suddenly it was all over.   Mike's cavalry withdrew in good order.

It was long hard fought & very entertaining battle.   Having failed to find a weak spot to attack the river line, the allies resorted to hanging out a flank to entice the enemy over the river.  Mike lost patience and took the bait.  The allied counterattack with their phalanx & a bit of cavalry was then decisive.
Posted by Jim Gandy at Tuesday, December 27, 2016 No comments:

We did have a Diadochi campaign battle to fight tonight, but with 6 players present we decided it could could wait & it would be more entertaining to do something that all could be involved in.  The battles were all different, but the sum total of types in each side was about equal.  Jim, Mark & Chris lined up for York, Mike, SteveJ & Renfrey fought for Lancaster. At Molesworth on Saturday we used Hail Caesar, this time we used our Medieval variant, Hail King Richard. 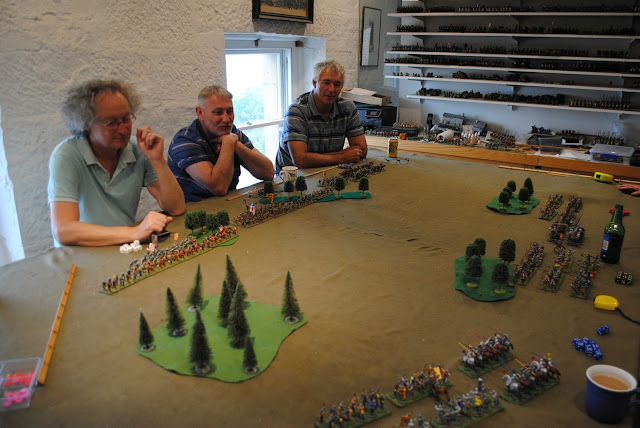 The Lancastrians are on the left side of the table.  For York, Jim is on the left, Mark in the centre, Chris on the right.  All leaders are 8's  with no CIC on either side. 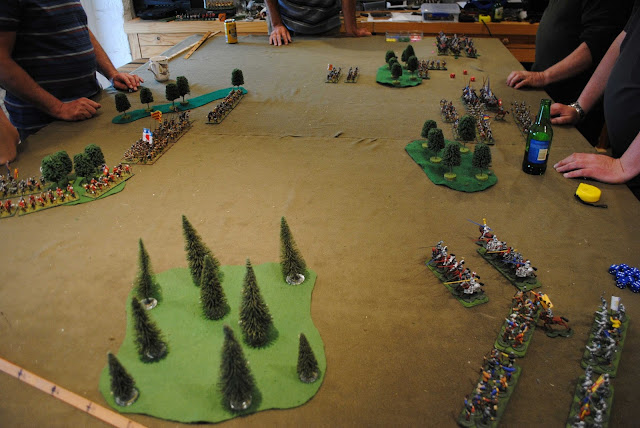 On the near side Jim's knights moved left causing Steve to retire his left fearing being outflanked.  The move was intended as a feint & as such suceeded admirably, but the ruse came to nought when the division failed command for the next four turns.  On the far flank, Mike's knights charged right across the field to attack Chris' men at arms while Chris knights refused to move to help them.  Mark tried to advance to counterattack Mike's battle before Renfrey could advance but also repeatedly failed command. 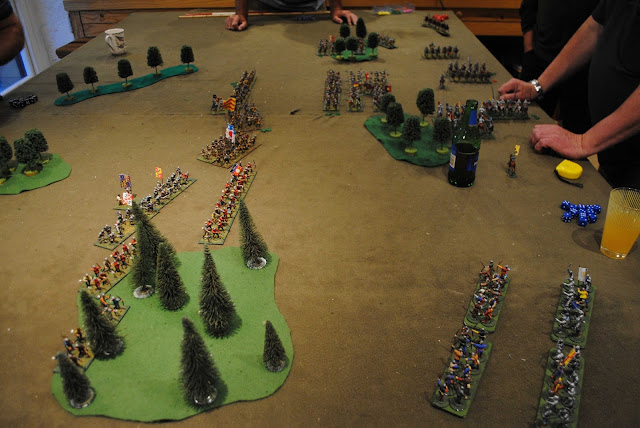 On the far flank Mike's knights have ridden down Chris' men at arms & have turned right to attack the Yorkists' rear, driving Chris' knights back.  Mark has moved forward, but failed all command tests to turn to face Mike.  On the near flank, Jim's knights finally got an order to move right to support his comrades, but his foot remain rooted to the spot.   Meanwhile Steve & Renfrey's battles have moved rapidly forward. 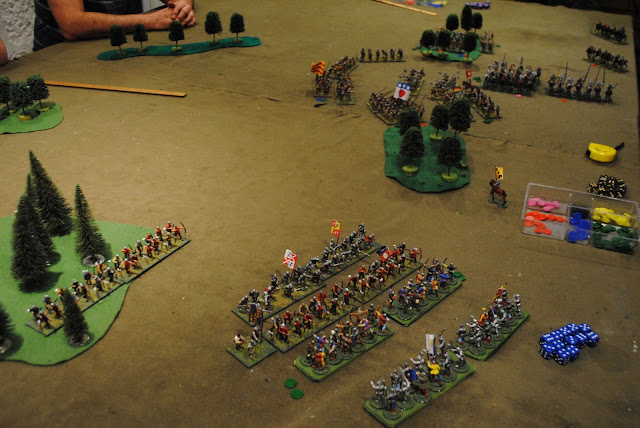 Jim's knights have got into the action in the centre saving Mark's rear from Mike's knights.  Chris' archers are holding on to the wood against Mike's men at arms.  Mark is under great pressure from Renrey & Steve's battle has again had good command dice to move right up to Jim's infantry. 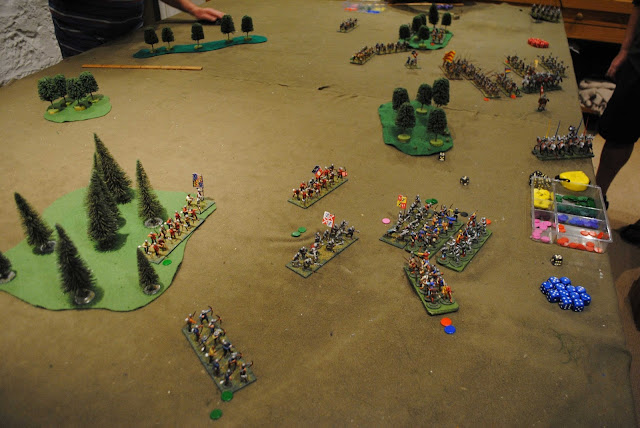 Chris' battle is down to half strength, but holding on.  Mark's battle is almost broken in the centre.  Jim's infantry tried to attack their way out of trouble, but numbers are prevailing against them. 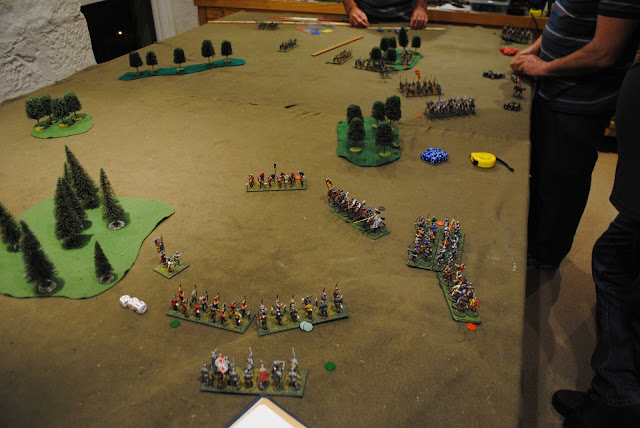 Mark's battle is broken, Chris's is still hanging on.   Jim's remaining knights have been brought back from the centre & have broken some men at arms, but a ring of bowmen has stopped their momentum & the whole battle is now shaken, though not broken. 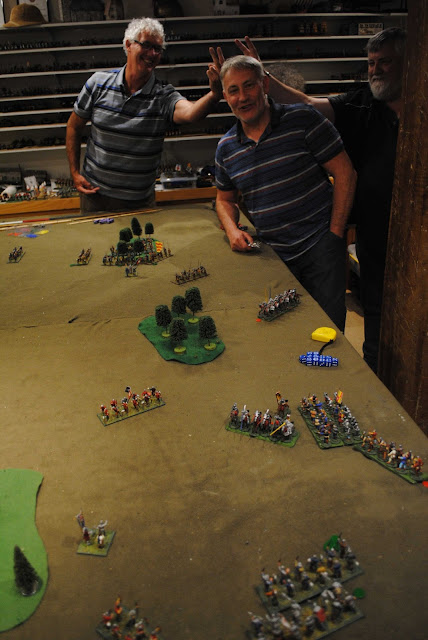 Chris' battle has finally broken and with it the Yorkists also break.  Renfrey was inordinantly pleased with himself, though the Yorkists were convinced that the result had more to do with the command dice than Lancastrian tactics.

War of the Roses at Molesworth

Dave put on a  WOTR battle at Molesworth last Saturday.  He used a random army generator system to provided each side with 3 battles of varying composition.  Dave & PeterC commanded the Lancastrians, Jim & Chris the Yorkists.  I took photos of the battle on my Iphone, but old age is catching up with it & it sometimes refuses to connect to my PC so I have been unable to download the pics.  Without pics as an aide memoire I can only give a general report.  The memory that stuck was that the dice gods strongly favoured Henry Tudor.

Dave posted a full report with pics at:
http://www.warlordgames.com/forum/viewtopic.php?f=28&t=27877

Renfrey is back home for Xmas & we introduced him to BoltAction.  On Tuesday I lent him a British army & Chris advised him in a fight against Steve's Germans.  Each army was 1000 pts plus a medium tank.  The scenario had 4 objectives. 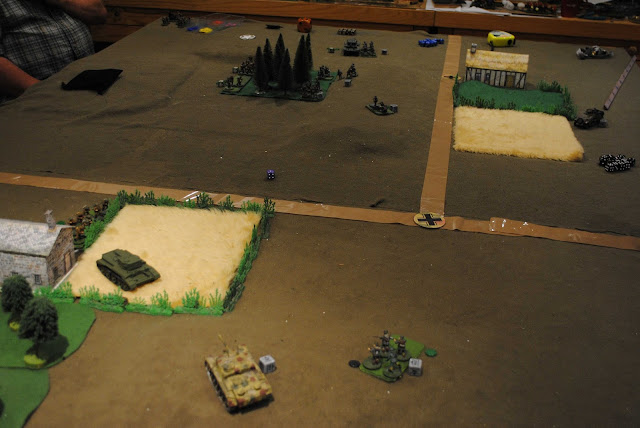 Both sides failed to mount any serious attempts to take an objective s the battle was decided on body count & with loses about equal, it was a draw.

On Friday we had another go, this time with 1000 pts each in a Hold Until Relieved scenario.  Steve brought his new Falshermjager & defended.  I commanded the Brits with Renfrey assisting. 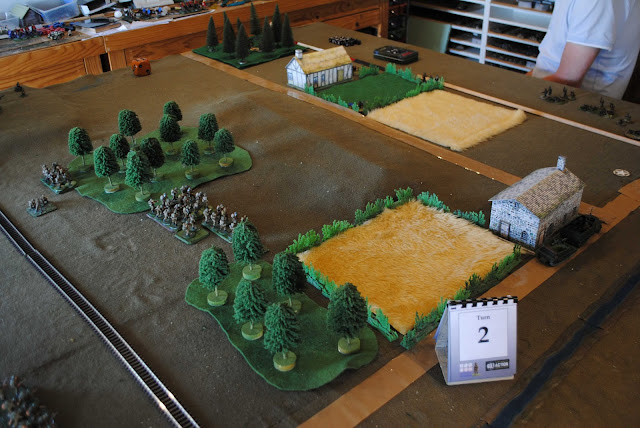 The Brits are on the near side.  The battle area is 6'x4', bounded by the railway line, line of rulers & river. 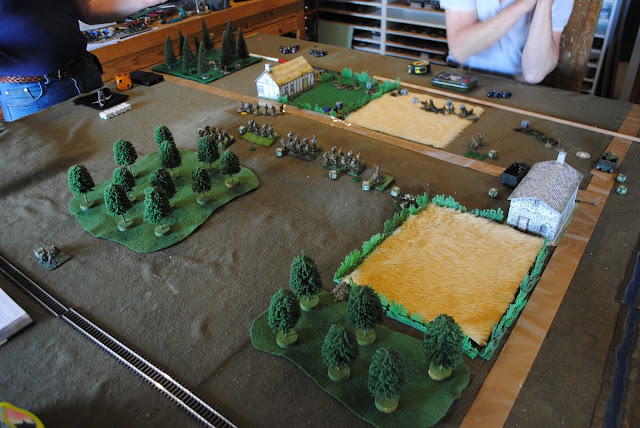 The Brits rushed their half track full of commandos & Carrier down the road to grab an objective  before the German reserves could stop them.  The British infantry were supposed to suppress the German counterattack, but they couldn't hit a thng & the Germans massacred the commandos. 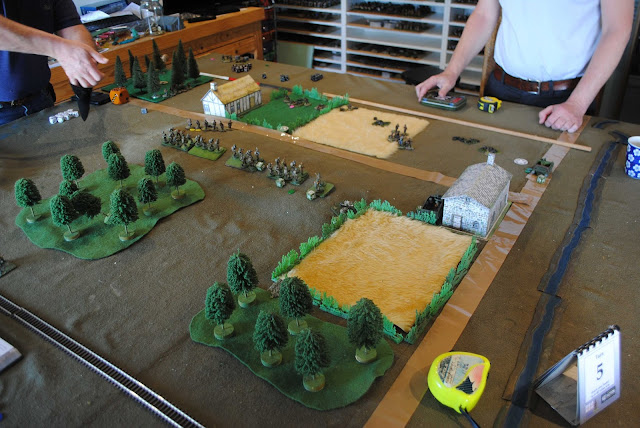 The Brits on the ridge blasted away to prepare for an attack on the centre objective, finally starting to cause some casualties. 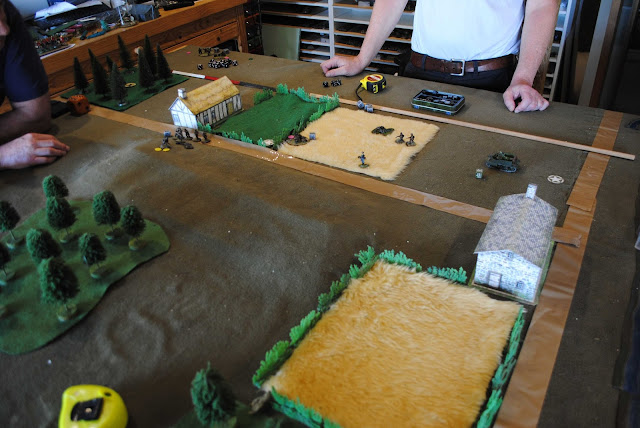 In the last turns the Brits launched attack son the centre objective, mometarilly taking it, but German counterattacks took it back.  The battle ended as a draw as teh atackers has taken only 1 of the 3 objectives.  Casualties were high on both sides.
Posted by Jim Gandy at Monday, December 12, 2016 1 comment: 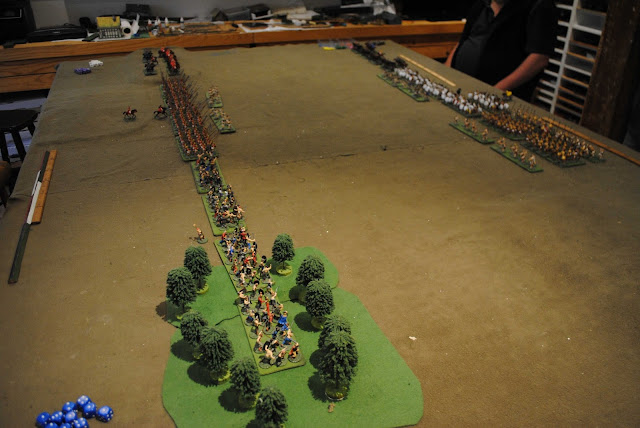 Jim & Mitch are on the left: Phalanx in the cnetre, cavalry of the left, warband son the right.
Mark & Chris are on the right with Hoplite sin the cntre, Cavalry on their right & phalngites + light infnatry on their left. 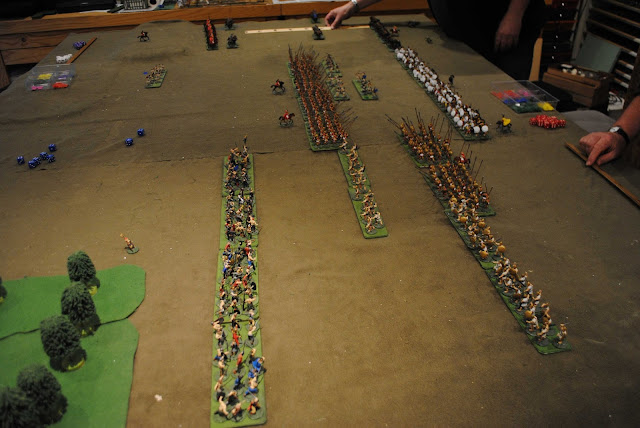 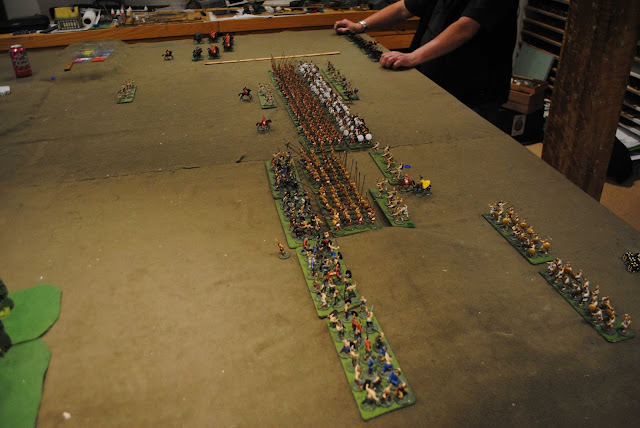 The cnetre came to grips first. 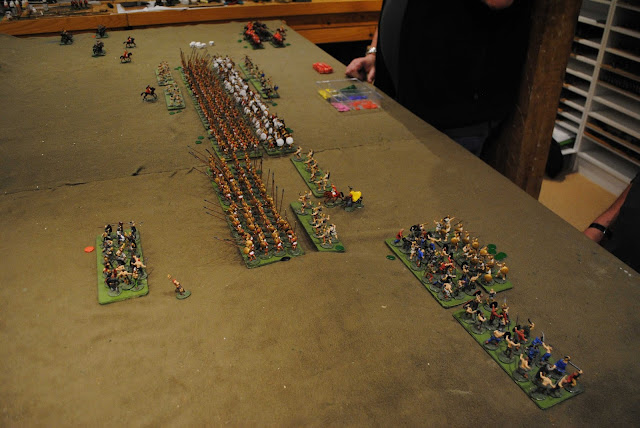 The phalanx & hoplites clash bogged down under the phalanx rule as expected.  The warbands smashed themselves on the phalanx.  the did better v. the light infantry, but one of them withstood the charge.  The cavalry is engaged on the far flank. 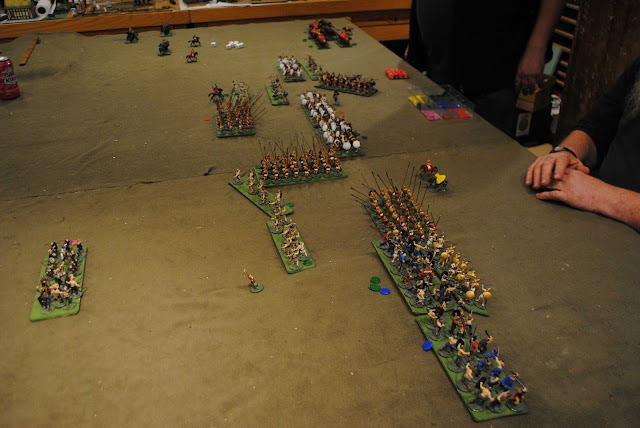 Mitch's phalanx id in big trouble.  One unit has broken v. hoplites, another has been hit & flank & broken by Chris' phalanx. Chris' light inf continue to hold on.  Jim's cavalry has got the upper hand on the far flank. 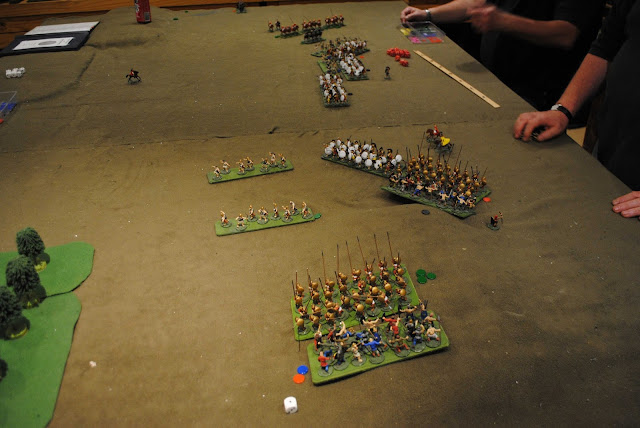 Mitch's phalanx has broken, but so has Mark's cavalry.  Jim has tried to attack the hoplites with his cavalry, but poor command has stymied the idea leaving the battle to be decided on the near flank where the surviving 2 warbands are fighting the 2 phalanx units after disposing of the light infantry.  No one would break and it became a matter of which side got to half broken and the rest shaken first.  The warbands broke with one phalanx shaken & the other 1 casualty off being so.

So a close run victory for Chris & Mark.