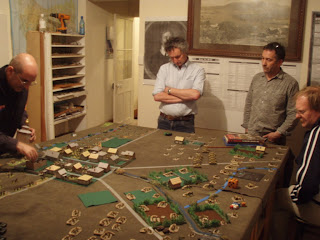 The usual incompetent Russian staffwork meant we had a late start after they turned up without the extra troops needed & had to go home & get them.

When the battle finally got underway, the Russian reinforcements came on so thick & fast on the Italian left flank they couldn't find space for them on the table. The 1st Fucilieri were overwhelmed, but the victorious Strelkovy were then too scared of Axis firepower to come out of the woods. Russian Anti-tank guns took on the MkIIs but the MkIIs won with a bit of help from mortars & Guastatori. But the gunners got lucky before the end and took some invaluable Guastatori with them.

On the other flank, the Panzers arrived eventually and the Militia on the Russian left were retreated off the table to cut their losses (one wonders what Uncle Joe's going to say when he hears about that manoeuvre - what happened to Not One Step Back ?)

Meanwhile the KVs advanced relentlessly on the Italian centre. One was destroyed by the 100s, another bailed by the 105s. But they destroyed the 2nd Fucilieri & the Itie anti-tanks guns, while the 3rd Fucilieri fell back before them with heavy losses. 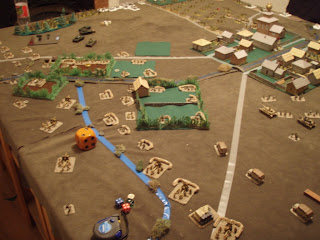 While all this was going on, the artillery of both sides blasted away, mostly ineffectually, but with an occasional big hit.

When we adjourned again, it was the end of turn 9 & the battle remains in the balance. The KVs are close to the Itie objective, but they are on their own as the Strelkovy were too scared of the MkIIs, HMGs & artillery to come up in support, while the MkIVs have been turned left & are racing to assist the Ities. A decisive result is unlikely with both sides' rights being too strong to lose, but the attrition could be significant either way in the end. The KVs are the key - they have dominated the battle so far - but how long can they survive the relentless artillery barrage ?
Posted by Jim Gandy at Wednesday, October 31, 2007 No comments: 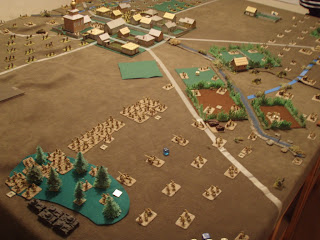 The battle opened with much digging in and an artillery duel. Gandini was rather miffed by lousy 8 Million Bayonets dice and finding his calculations on the artillery balance upset by the Ivans having an extra battery from an Assault Platoon. The Ivans managed to get dug in and on target first but did not capitalise on it. The first German reinforcement came on turn 3 & was a 105 battery. The Gods hit it immediately, but Byron saved both hits & also unpinned immediately. The Ities gave up on digging-in and joined in pounding back at the Gods. The 100's, 105's & Heavy Mortars took out 4 guns in a turn & suddenly the balance shifted a bit back to the Axis.

On turn 4 the Axis got no more reinforcements, but the Ivans got two Platoons. There wasn't enough troops at Camp Cromwell available so the battle was adjourned until next week when the Ivans will get their act together & bring some more.

At this stage the Axis have lost just 1 100mm gun while the ivans have lost 5 big guns, 4 a/tank (from the Itie 75's) & 2 Infantry. The Militia on the Bolshie left is looking a bit shaky, but on the other flank the Fucilieri are facing a wall of Bolshies & more coming. Next week it's going to get very intersting.
Posted by Jim Gandy at Tuesday, October 23, 2007 1 comment: 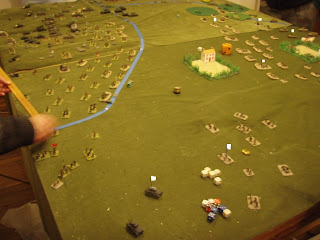 Comrade Stefanovich fowarded this authentic picture of the battlefield, taken by a brave brother in a sturmovick. It shows the overwhelming effect that the Russian spirit had on the defilers of the motherland.
The fascist pigs have editted this picture for use in their bulletins. But they cannot hide the truth.
Posted by Nick at Thursday, October 18, 2007 No comments: 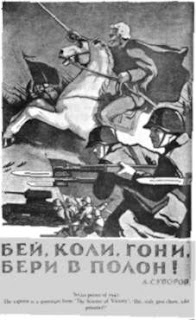 The Proletariat Defence Council is pleased to announce a glorious victory over the Hitlerites near Isdonisgrad.

A concerted attack by massed fascist forces was mounted on brave defenders of the motherland. Many heroes were gunned down by fascist heavy tanks as they tried to stem the tide of evil. But their sacrifice was not in vain -- they slowed down the forces of evil. Meanwhile, the heroic defenders of Myskina rushed to the battlefield. Their arrival totally diconcerted the evil fascists. When they saw the peoples militia, manned by the mothers and workers of the glorious socialist republics, the fascists realised that they could not defeat the Russian spirit, and started to withdraw. The withdrawal turned into a rout, with Russian light tanks pursuing the fascists and gunning them down as they fled -- a just retribution for the evil they had inflicted.
Posted by Nick at Wednesday, October 17, 2007 1 comment: 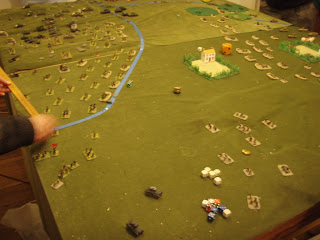 Isdonisgrad Campaign Battle in Hex I6 continued:
German Grenadiers & Panzer Grenadiers (Jim, SteveJ & Byron)
v.
Russian Strelkovy & Tankovy (Nick, MarkO, SteveP & Dillon)
SteveJ's 38ts stormed forward on the German left with Grenadiers in support.
Nick's KVs slowly advanced on the Russian left skirting the 88's zone of death. The rest of his tanks slowly moved to the right over the rough ground.
Meanwhile, the artillery, rockets, airforces & mortars pounded away at each other.
The 38ts were hit hard by Sturmovics, but they still destroyed most of a Strelkovy Plat, the few remainders stepping off the table to escape.
A Panzer platoon came on on the Germans left as the vanguard of a Panzer Coy arriving as reinforcement, but next turn a Gods of War Battery turned up on the German right flank as the advance guard of a Strelkovt Coy.
The Germans decided the risk of catastrophe was too great, conceded the battle and instigated the Campaign Retreat Rule. As they retreated the artillery & Sturmovics picked off a Pak 40 & an 88 while the Luftwaffe took out some the newly arrived Gods of War.

Some of the Germans (SteveJ) wanted to fight on, but General Gandini is never happy to be outgunned & was pretty happy to conceed defeat while avoiding serious loss.
Casualties in the Campaign after two battles (one minor victory each) are pretty even. A decisive battle is yet to come. Maybe Isdonisgrad next week will be different.

Except from Gandini papers:
Isdonisgrad
8 Sept 1942

This morning’s action at Ivansixski went perfectly to plan. The 2nd Grenadiers and Panzergrenadiers drew the main part of the Bolshevik horde into battle then executed a skilfull withdrawal. Our losses are slight while the Ivans have lost many guns and most of a Strelkovy Platoon.

With the main part of the Bolshevik army pinned down at Ivansixski, Isdonisgrad is ripe for the plucking. As I write our brave Fucilieri and Grenadiers are preparing to attack.

Gandini
Posted by Jim Gandy at Tuesday, October 16, 2007 No comments:

With fresh copies of VB in hand we tried out the first two scenarios. 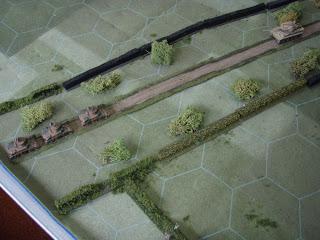 Whitman's Wild Ride:
Barrie's Tiger didn't quite get to end of the queue - the Honeys survived to Turn 10 to deny him victory & make it a draw (see pic).
Odd little scenario - not much to do except shoot & hope for hot dice - but probably a good one for beginners.

The German's Tiger Ace Skill was 3 shots for both platoons. Both platoons came on on the same road (d4). 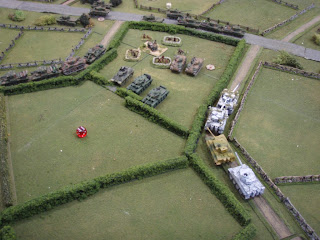 The Brits started in a pack with the Cmmd teams in the centre around the objective & the 3 Tank Platoons on the adjacent roads.
As the Tiger column came up the road, the Brits sent A Tank Platoon to the left & C Plat to the right as soon as they finished their tea. B Plat stayed in reserve continuing to drink tea. The Firefly of A Plat jumped out onto the road, missed it's shot at Mark's lead Tiger & was promptly destroyed. Mark then engaged the Cmmd tanks thru the hedgegrow. C Platoon engaged Barrie's Tigers. The Firefly got one before the platoon was destroyed (3 Croms killed & the FF failed morale). Mark's 2 Tigers + Barrie's one now finished off the cmmd tanks. While the Cromwells of A Plat manoeuvred around the Tiger's flank, B platoon finally finished their tea and engaged the Tigers front on. The FF got Barrie's second Tiger on it's first shot. Mark's 2 Tigers destroyed the Cromwells of B plat and bailed the FF. The FF survived the Platoon Morale test but remained bailed. As 3 Croms hammered away at the Tiger's sides without effect, Mark ignored them & had 6 more shots at the FF. He got just one lousy bail. It survived morale again, unbailed this time - and promptly popped both Tigers = 3 Tigers in 3 shots !
Sgt Johny Wilkinson & the rest of his crew have been nominated for medals & the model has had 3 rings painted on the barrel. 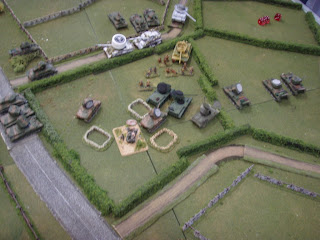 The scenario is an interesting change - nice to have 4 Tigers to shoot at ?
We didn't have smoke handy to mark the dead tanks, but all the tanks in the 3rd pic are dead except the 3 Croms of A Plat beyond the Tigers & Wilkinson's FF on the left.
Unfortunately, the FF used up all Jim's luck for the day - he copped a $80 fine + one demerit point for doing 80 in a 70 zone on the way home.
Posted by Jim Gandy at Tuesday, October 16, 2007 No comments: 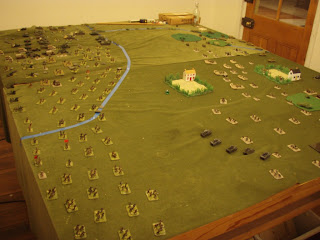 Jim was in overall command of the Germans, Nick of the Russians. With so many troops to put down it was a slow process to deploy (alternating placing platoons from both Coys in a Campaign Encounter Battle).
The Russians concentrated their armour on their left in the rough ground (where they had more room to deploy). Their infantry was on the right with the artillery in the right rear and mortars on the left.
The Germans deployed Grenadiers along their front peppered with HMGs. The Pak 40s were in the front line in the centre, the 88's in the farm yard behind the centre. Artillery in left rear, mortars & rockets in the centre. Panzer Grenadiers still in HTs on the right. Marders behind the farm, 38ts on the left. AA in centre rear.
In their first turn the Germans were restricted by the Mobile battle Rule. They advanced on their left with Grenadiers & 38ts while forming a defence on their right. They managed to dig in their Paks, 88s & mortars, but that was all. One of the PGs platoons dismounted, the other moved back.
In the Russian 1st Turn they advanced their KVs, moved their other tanks to the right, tried & failed to dig in their Infantry & opened up with their massed artillery & mortars. The Germans lost a Nebelwerfer, a Grenadier & an HMG & were probably lucky at that.

The battle was adjourned at that to be continued next week. A titanic struggle seems to be in the making. The pic is taken from behind the Russian right flank. Note the swarm of tankovy in the hills on the far left.
Posted by Jim Gandy at Wednesday, October 10, 2007 No comments: