More Wars of the Roses in Canberra

After a quick edit of the Spear & Sword Action rules in the light of comments arising from yesterday's game SteveD & I fought a smaller action.
SteveD of Lancaster v. Jim of York.

Pics taken from behind the York force.  Deployment was by sketch map.

The Lancs took up a defensive position a a ridge & moved most of their cavalry across their rear to their left flank.  The York plan was slowed by poor command dice, but they are concentrating thei ingfnatry on the centree & moving their cavalry to their right flank.

On the left, the Lanc's cavalry has broken a crossbow unit & rallied back.  There is an exchange of arrows, crossbow bolts & hand gun balls in the centre.

The Lanc cavalry on the left has been finished off by crossbow fire.  The cavalry have finally come to grips on the right.  The Lanc's have counterattacked in the centre with some success.

The York centre has been driven back. but has consolidated.  The cavalry fight on the right is still indecisive.

The York cavalry has prevailed on the right & the York's second line has taken out enough infatry to cause the Lancastrians to fail army morale.

Playing games against different experienced wargamers is a great way to collect ideas for refining a set of rules under development.  SteveD was particularly impressed with how Spear & Sword Action provides an interesting game with a relatively small number of figures as he has a number of small armies in different periods (of which he has several).
Posted by Jim Gandy at Wednesday, January 29, 2020 No comments:

Spear & Sword Action in Canberra: Wars of the the Roses

AS their cavlry approached the enemy left, the main York army advanced as the Lancs partially redployed in their defensive position.

The Lancs are holdng up the York cavalry on the left, but the York's soearmen have punched a hole thru the Lancs right of centre.

Lancs counterattacks on their right, their  & left centre have had some success.

Lancs spearmen have also had some success in the cntre, but Yorks spear have smashed the Lancs cavalry with a flank attack & the Lanc's counterattack has run out of steam.  It is a win for York.

It was very useful having a battle with rules under development with exerienced wargamers not in the Cam Comwell groove.  They looked at it witha  fresh perspective & gave me a number of great suggestions for further improvement.

Chris & I represented Camp Cromwell & Tasmania at the Cancon 2020 Bolt Action tournament.  The army limit was 1250 pts, supposedly generic & not cheesy.  However a mainlander's idea of not cheezy seems to differ somewhat from ours.  We faced mostly double platoon Late War lists loaded up with all the deadly stuff - flame thowers, multi MMG armoured jeeps, bugs & honeys, snipers, & multiple tanks & A/cars.   On top of that we never had much luck either.   I know that's the classic wargamer's excuse, but I think I have a case.  For instance, my Sahariana was destroyed the first time anything fired at in all 5 games.

There were 50 players with a wide selection of forces, nationalities & terrain.

My first battle (Meeting Engagement) v. Brits did not go well.   I lose my Sahariana in British bombardment, then had missed 4 tries at shooting up a flamethrower before it burned a hole thru my lines.

Round 2 was No Mans Land against more late War Brits.  I managed to slavage a tie.

Round 3 was key positions v. more Late war Brits.  This one used the double platoon method to get a swarm of bugs loaded with veterans with smgs.  With little a/tank, my early war Ities had no chance.   I resorted to playing for a draw hoping to distact the enemy from the vicrory conditions, but he remembered just in time to sieze the vacant objectives just before the end of turn 6.

Round 4 on day 2 was Point Defence v. more Late War Brits.  But this mission suited my force & I won comfortably - holding all objectives & losing just 4 men & the Sahariana.

Round 5 was the Sectors scenario & my first blue on blue.  The enemy had 2 platoons allowing 2 MkIII's, a 222 & a lot of small vet squads armed to the teeth.  With little anti-tank I felt helpless as the armour suppressed my men & the German smgs & flamethrower systematically destroyed my army.

So my end result was 3 losses, 1 win & 1 draw.  In the mean time Chris managed 4 losses & a draw.  His only win being, like me in round 4, where he attacked a Japanese force.  Chris finished last Allied Major Power & I finished last Minor Power & I received the wooden spoon.  But all my opponent's & all but one of Chris's were nice guys & good to play against.   Both of us had no delusions at the start about doing well in the victory stakes & enjoyed our games anyway, attempting to at least put up a good show against the odds.

The TO's did a great job & it all went very smoothly.   They generally avoided blue on blue & we got a different table every time.

The village is under attack by the 2 brigades that advanced thru the woods & dismounted cavalry.  Another Fed inf brigade has just come on the left hand side.
The Confederate reserves are marching down the table.

The Union attack is closing in on the village through the Rebs still hold all the buildings. 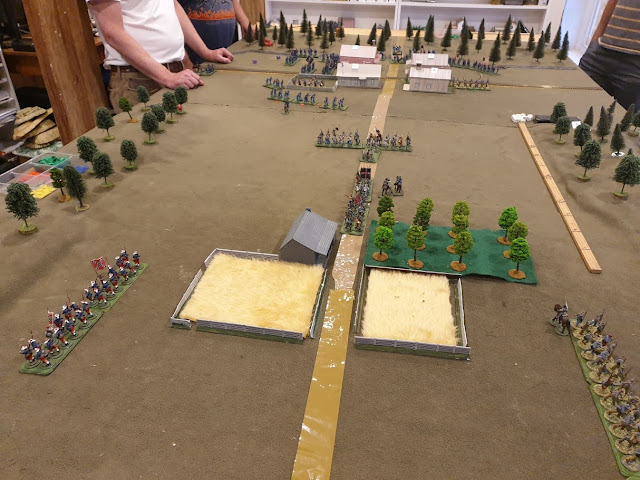 The first of the Confed reserves is deploying. The Union has taken the whorehouse on the far left & the stockyard beside the railway station.

The Union cavalry has mounted up & skedaddled behind the last to arrive reserve brigade after being shot up by the Confederdate counterattack.  But the Saloon has fallen to the Union & the Station is under attack.

As night falls, the Confederate counterattack is driving the Union right back, but the Union have taken the Schoolhouse (front right) & repelled the Confederate counterattack on it.  The Union have suffered heavy losses & are being pushed back by fresh Rebs, but the Union held the whole town at our 10pm deadline so it is a Union victory.
Posted by Jim Gandy at Wednesday, January 22, 2020 No comments:

Tonight's game was a re-fight of one a couple of weeks ago, but with different personel.
British: Renfrey & Chris.
Continentals & French: Mark & Mike.

British on the left, French & Continentals on the right.

The battle opened with the Continental artillery being sent forward in cavalier fashion which prompted a British cavalry attack trying to take it our before it was deployed.  The French cavalry ia moving to protect the guns.  In the woods on the far side the British Indian allies are advancing on some woodsmen.

The cavalry & artillery skirmish in the centre was pretty much MAD, with the French cavalry & a gun destroyed, but the British cavalry also decimated.

Skirmishing continued on both flanks as the main forces of both sides cautiously manoeuvered towards each other in the centre.

Suddenly after a cautious build up things suddenly got decisive.   The Indians on the far flank have taken out the woodsmen opposing them & taken the village.
The Colonial regulars attacked the British vets & bounced off.
On the near flank the French vets are giving the Hessians a hard time.

On the near flank the Hessians have withdrawn from a losing situation.  But the battle is being decided in the centre where the Colonials are being blown away by the British vets.  The French & Continental army fails its army Break Test. (The Brits lost last time we fought the scenario).

The rules are still a work in progress - they work well already, but it takes time to nail every aspect.  The previous battle with the Devenish bros gave me a few ideas for improvement which I tried out tonight.   I thought mostly they worked well, though the battle brought food for more thought on some aspects.
Posted by Jim Gandy at Wednesday, January 15, 2020 No comments:

The Germans are on the near side with 3 Mk IVs & 2 infantry squads in the woods on their left, 2 Panthers on the wooded hill right of centre & 3 Hetzers beind the hill on their right.  The US have an infantry squad, a bazooka squad & 2 tank destroyers on each flank & a bunch of tanks or TD's on the centre hill.

The battle started badly for the Germans with a Panther destroyed & the other badly pinned by long shots on turn 1.  On the near flank infantry advanced on each other with tank support.  Tanks sniped at each other from cover across the central plain & the far valley.

With the big pussies out of action, the Mk IV's & Hetzers were systematically picked off.  But the German infantry took both objectives on the left & fell back behind the ridges still in posession of 2 ridge top objectives.

At the end of turn 7 the Germans had been decimated but still held 4 of the 6 objectives, but the dice decreed an 8th turn.  The US armour surged forward & took out the Panther holding the central objective, but the grenadiers held their ground in the village & the sole remaining Hetzer clung to another objective.  So though reduced to just one Hetzer & 2 infantry squads the Germans held on for a draw.
Posted by Jim Gandy at Tuesday, January 07, 2020 No comments:

This afternoon I put on an AWI game using Musket Action for the Devenish bros.

The Brits are on the near side, the French/Continentals on the far side.

There were side shows on the flanks with Indians & woodsmen in the woods, but the battle was decided in the centre.

The British vets have been broken & combined with minor losses along the line it's added up to a British army morel fail & a French/Continental victory.

Over Christmas I refurbished my small trebuchet, giving it a coat of paint & making a few detail improvements to make it easier to assemble & disassemble.  Today we took it to Mark's out-of season & deserted rugby ground to get some more test data.

The machine disassembles into modules that fit in the back of my little Merc with just the arm on the roof rack.  We were able to set it up right next to the car & even had our own grandstand.

We didn't try for any records as this was a fact finding mission.  We systematically varied one variable at a time:
- Location of the power weights on the arm.
- Amount of power weight.
- Ammo size (0.72Kg bocce balls or 1.7Kg steel balls).
- Sling length.
For any given ammo there is a sweet combination of these parameter where it really flies.  I wanted more data to allow me to better predict what the sweet spot is rather than having to zero in on it by trial & error each time.   After 21 throws I have a heap of data to examine.
The longest throw was 73m, but we didn't power it up to the max today.  The last time we did that we bent the 20mm steel main axle.  I intend to get some high strength steel rod to replace the mild steel, but haven't done it yet.
We also timed a firing & found we could shoot a round in 40 seconds, but we took much longer than that measuring the distance & retrieving the ammo each time.
Posted by Jim Gandy at Friday, January 03, 2020 2 comments: