The Persians thought they were doing good when they maneuvered around the Greek right flank and hit one Hoplite unit in the flank with Heavy Cav & another with the Imortals. But on the other flank one small Persian Infantry unit copped some hot dice by their opposing Hoplites and routed before the Hoplites on the other flank broke. Nick then pointed out that either side lost if they lost just one of their main battle line units and suddenly it was Game Over just when things were getting interesting. Tactica has its good points, but it's awfully arbitrary sometimes.

The US held a village which the Germans had to take to win. Both sides had only infantry at the start with Shermans & Panthers to come on as late reserves. When time ran out according to teh scenario rules, the Germans had got a foothold in the village, but not taken it, so it was draw. The unfamiliar rules required much earnest examination of the rule book & slow progress. The players seemed to like the rules well enough, though your reporter doesn't see enough advantages over FOW to justify the effort of l 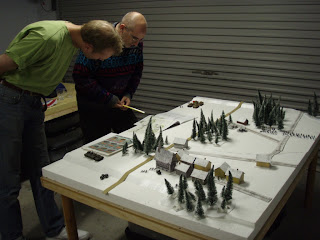 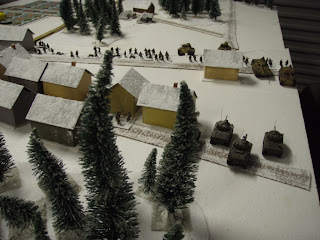 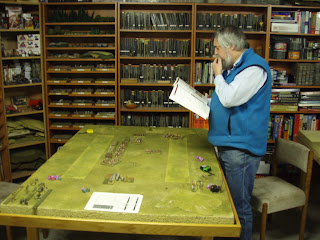 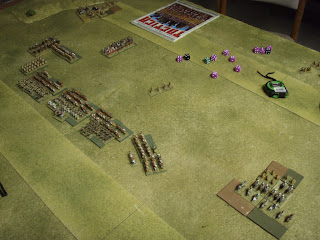 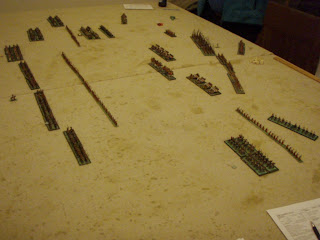 The Persians sent their Chariots & Elephants forward in the centre with the Infantry following at a safe distance behind & Cavalry on each flank. The Macedonians were happy to hold back & receive the attack on their centre while pushing forward Cavalry on their right.

The second Persian line found the Macedonian line largely uneffected by the first wave and it too gradually melted away. The Persians failed Army morale before their right wing could swing around the flank and help out.

The rules worked pretty well. There is a problem for crap armies in that good troops so often win with no casualties it is very hard to overcome quality with quantity.
Maybe that is as it should be and only the points system needs tweeking.
Maybe we need to make units become more fatiqued and less effective after victory so even if they do win without casualties they lose some effectiveness.
Maybe we just need someone to figure out how to use crap armies better.
Posted by Jim Gandy at Wednesday, March 12, 2008 No comments: 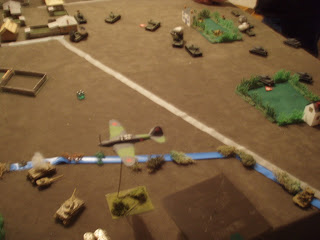 The T34s attack on the Axis left had outrun its support and halted to let the GODs do the work for them. This they did very well making an awful mess of the Itie artillery while saving themselves whenever the Axis hit back. On the Axis right the MkIVs & KVs slugged it out with occasional support from each side's artillery. For a long time nothing much happened as the KVs failed to hit and the MkIVs failed to penetrate but in the last two turns the artillery & tanks of boths sides finally did some damage - 3 KVs died to just 2 MkIVs. The butchers bill favoured the Russians but the Axis could take some comfort in taking out a few of the dreaded KVs. The result keeps the campaign very much in the balance.
The pic is of the Russian left near the end of the day showing the Panzers getting around the KVs right.
Posted by Jim Gandy at Tuesday, March 04, 2008 No comments: