We tried out the the new back bunker at Good games with two Hold Until Relieved scenarios. 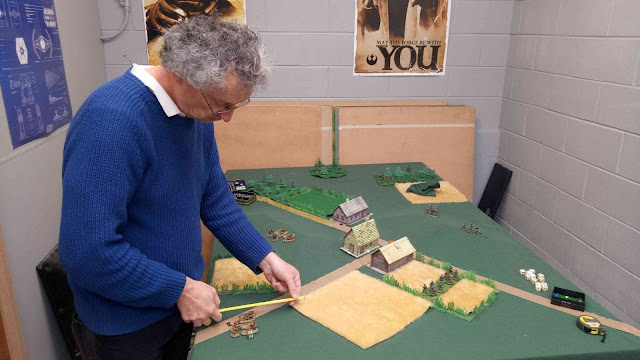 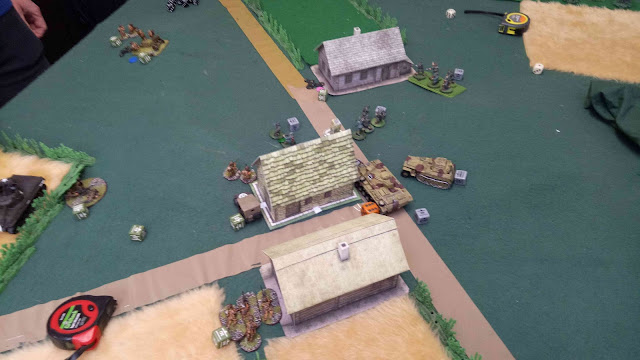 After an early disaster when the Germans lost their main strike squad of panzergrens in an ill-advised assault, they turned to plan B - whittling away at the enemy & making a massed assault on the single objective in turn 6 to win. 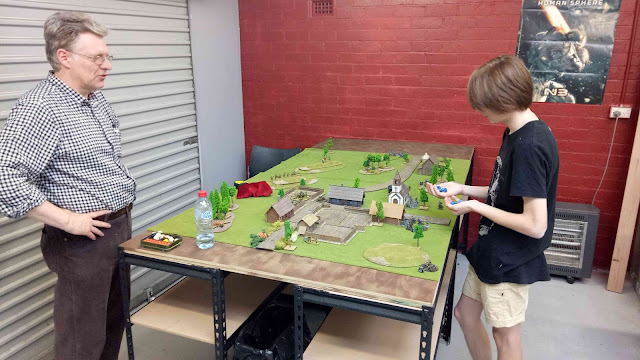 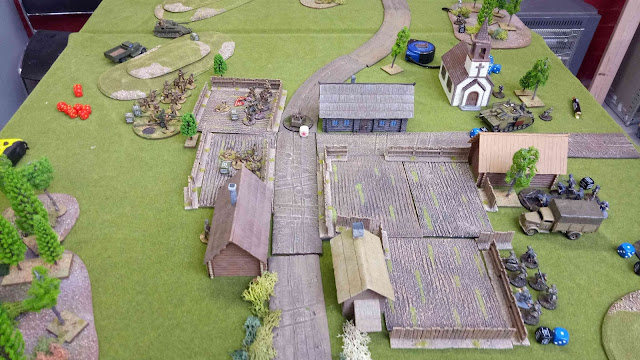 The Soviets never let the Germans get close to the objective & the Germans lost this one.
Posted by Jim Gandy at Sunday, September 24, 2017 No comments:

My main reference for this scenario was Jeff Berry's excellent Obscure Battles Blog post of Nov 2013.  This provides a detailed map of the initial deployment, a detailed order of battle & notes on the troop characteristics, as well as a detailed battle description - everything you need to design a wargames scenario.

The rules used were Hail Napoleon - our house variant of Hail Caesar for the black powder era - with a extra few tweaks we use in large historical battles.  Some tactical options are simplified (with 50+ units a side the players have plenty to think about without concerning themselves with what individual battalions are doing).  We halve our standard ranges (so 6" for muskets, 18" for artillery) so they are a better match to the ground scale.  We maintain the standard move rates (0-3 times 6" for inf, 9" for cav), but consider each turn to represent twice as long a time to compensate.

We used 15mm figs in this battle for 2 reasons:
1) We don't have any figures for 1704, but our 15mm 7 & 30 Years Wars figures pass pretty well as long as you don't bend down too close, so a much better visual match than 28mm subs.
2) They are much less out of scale with the terrain than 28mm figs, so make for a better simulation in a large battle with a small ground scale.

The battle front was 7.5km long so a ground scale of only 400mm per km was required to allow it to fit on our preferred 10'x6' table configuration. This scale also suited the available number of figures.  At this scale, the 150mm wide units represent brigades of 1500-2000 infantry or 600-900 cavalry (varying because the number of ranks in the formations varied between the several national armies involved).  The Command Groups are divisions of 3-8 units & closely follow the historical order of battle though there is some simplification of the OOB below that level (variations in numbers, size & quality of individual battalions & squadrons within command groups add complication we don't need when there are so many).  When deployed historically on the table, our figures matched very closely with Jeff Berry's map so our calcs on the spaces occupied per formation match nicely. 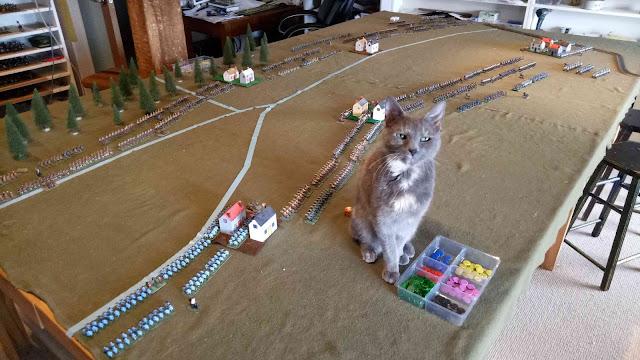 Pic taken from behind the French left with historical deployment (and my beautiful assistant).

The players tossed off for places:
Tallard = Mike.  Marsin = Mark.  Chris = Marlborough.  Steve = Eugene.
They started the battle in the historical deployment except for a bit of shuffling of artillery batteries. 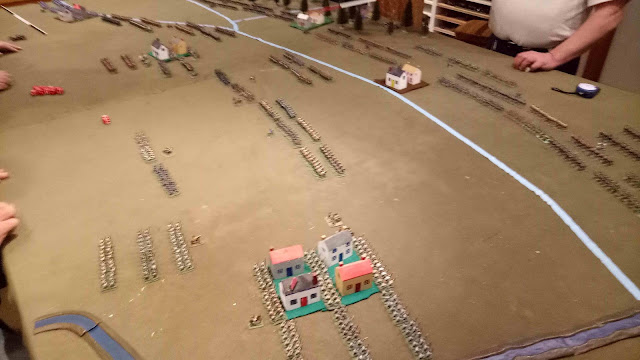 The French got the first move and immediately advanced in the centre.  (Blenheim is in foreground in this shot - the rest of the pics are taken from behind Malborough's line). 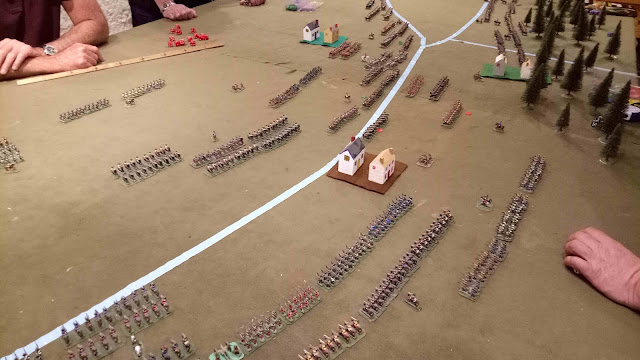 Marlborough & Eugene seemed to be taken by surprise & threw lousy command dice.  Only the division on the right of Unterglau advanced immediately.   Malborough followed up on his run of 6's for command dice with a run of 1's in combat & Break Tests & his advanced division evaporated.

Marborough got his left in order but Marsin joined in the attack on the hinge between Malborough & Eugene and pushed infantry through to Shwernnenbach cutting the Imperial army in two. 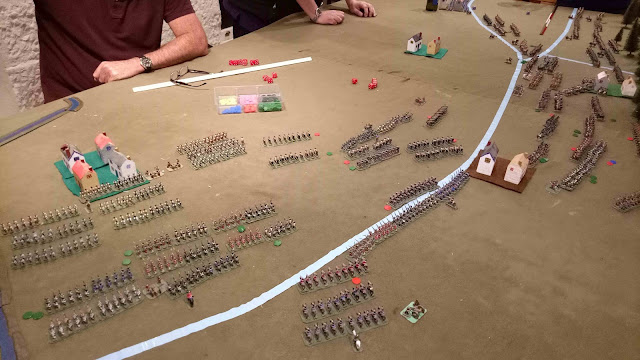 Marlborough's infantry reserve is holding a line behind Unterglau while he is trying to counterattack the left flank of the French advance & Eugene is trying to do the same to its left flank. 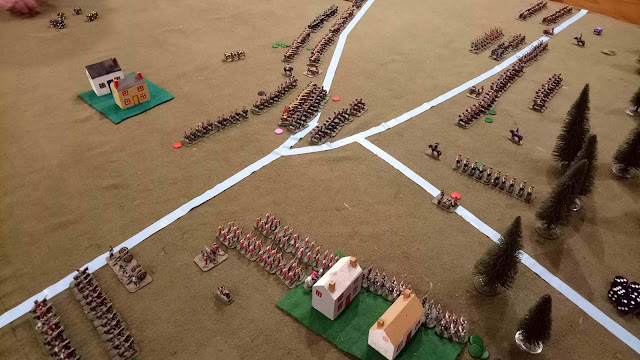 Close up of Schennenbach.  Eugene's cavalry counterattack is held by Marsin's cavalry & outflanked by Marsin's infantry & artillery around the village. 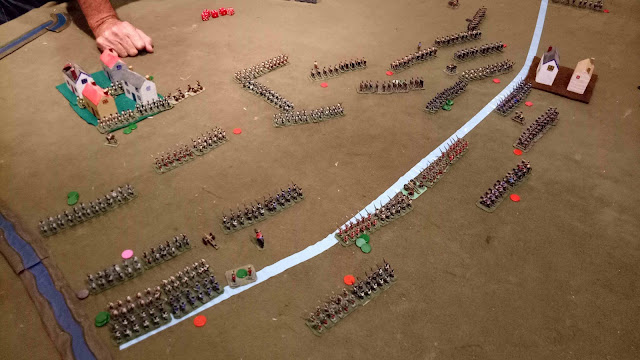 Malborough's counterattack on his left has failed & is falling back on the Nebel. 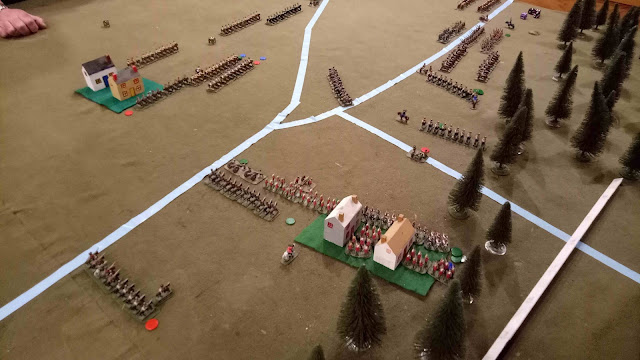 Eugen is bottled up beyond  Schennenbach & unable to help Marborough. 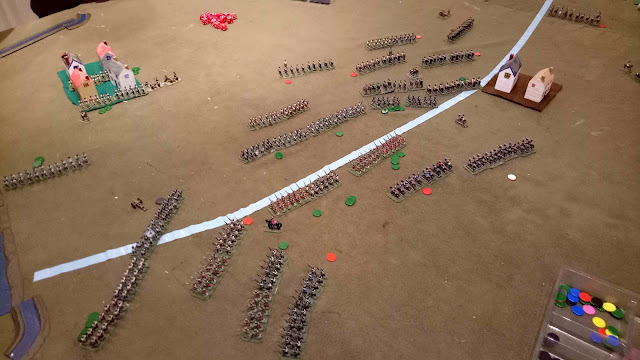 Marlborough's left is driven back over the Nebel & all his remaining divisions are on the verge of breaking.  We called in the mercy rule & ended the game.  It took less than 2 hours.

So our Blenheim reversed history big time.  Our Tallard & Marsin seized the initiative, got on a roll, rode their luck & never let the Imperial army recover.  They broke through the Imperial centre to split the two Imperial armies apart then destroyed their desperate counterattacks.  By the end the French & Bravarians lost just 2 units each.  Eugene lost 3 units & had no trouble retreating his force, but Marlborough's army was entirely broken.  Alas, no great palace in Oxfordshire for our Malborough.

I lent Rich a Soviet army to try out Bolt Action v. my Panzergrenadiers.  The Germans defended in a Surrounded scenario. 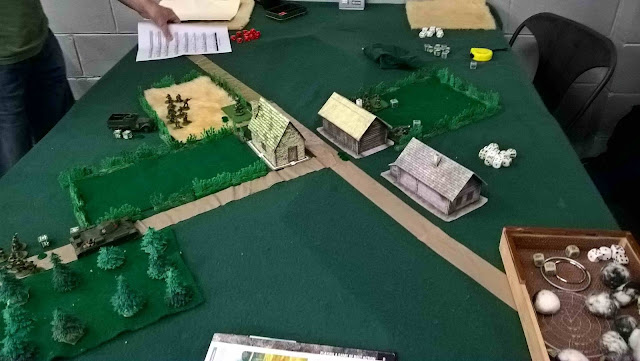 The Soviets were crushed by an unbeatable combination of experienced enemy & their good dice, but it was still an entertaining game.  The Soviets did have some fun - the T34 popped a MkIII & an inexperienced Soviet infantry squad took out a panzergrenadier squad in an assault. 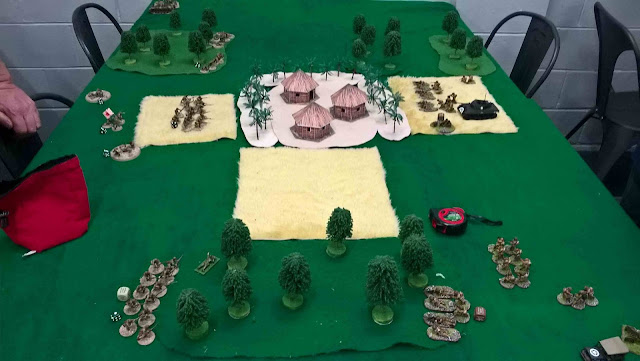 Meanwhile Chris' Japs took on Steve's US in the jungle.  Maybe Chris was a bit rusty after his extended exile on Matt Is as the Us won comfortably.
Posted by Jim Gandy at Sunday, September 17, 2017 No comments:

I had set up Blenheim with 15mm figs for the night, but too many other things came up & we didn't have enough players.  So we cleared off an end of the table & got out some Fokkers.  We'll do Blenheim next week. 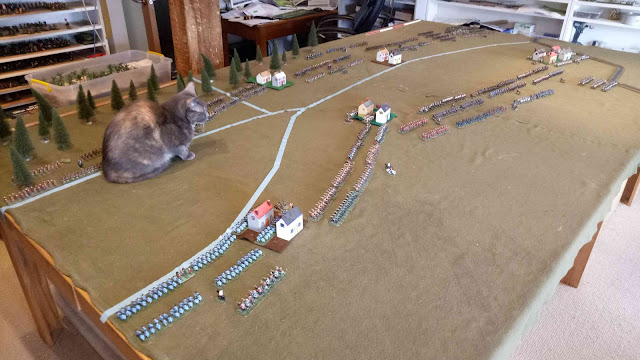 Game 1:
A Roland had to do a recon run across the table escorted by a Fokker DVII but attacked by 2 Camels. 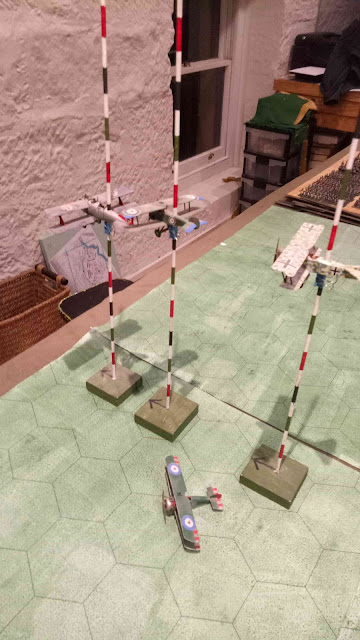 Mike's Camel had it's engine shot up by the rear gunner & the Fokker & had to glided to earth (making a safe landing).  Then Nick's Camel got on the Rolland's tail but the Fokker got on his.  The Camel shot the Roland down, but paid dearly for his heroism, going down himself immediately afterwards.  So both sides claimed victory - the Brits shot down the recon, the Fokker pilot got 2 kills. 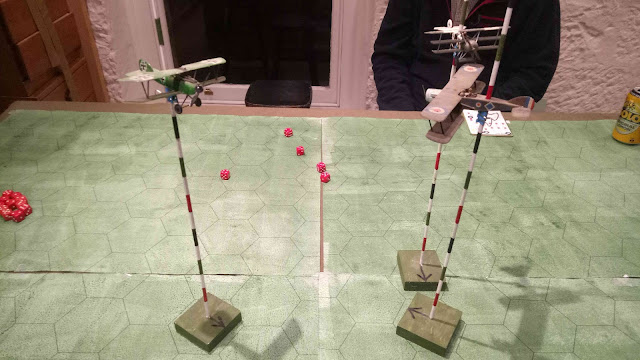 Game 2:
We then swapped sides & changed scenario.  The Germans had a Fokker Dr1 & an Albatros.   The Brits also had two fighters - a Bristol fighter at the start & a Spad to arrive if the Bristol was shot down.  The Bristol couldn't handle two enemies & was shot down, but not before it inflicted serious damage on the Fokker. 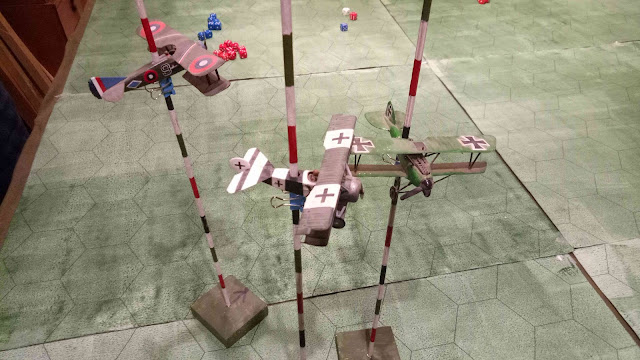 The Spad arrived & son finished off the Fokker.  The veteran Spad pilot then got onto the Albatros' tail & it just couldn't shake it off.  2 kills for the Spad, 1 for the Brits.
Posted by Jim Gandy at Wednesday, September 13, 2017 No comments:

The new toy syndrome still hasn't worn off my BA Italians & I took on challenges from Dave at Camp Cromwell last night & from John at Good Games today. 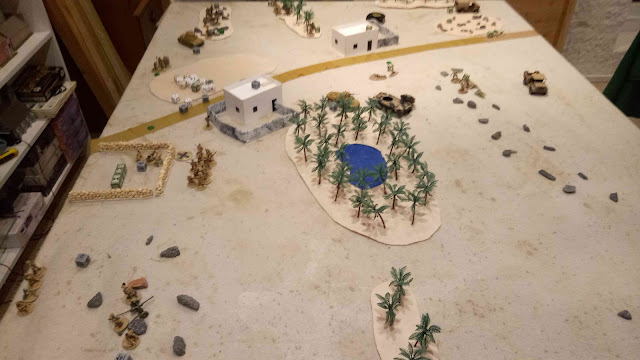 Last night Dave's 8th Army attacked in a Point Defence scenario - the Italians are on the left.  Dave concentrated his attack on the Italian left, but his flank attack was countered by Paracdutisti kept back in reserve & his CS Crusader was no match for the combined might of the AB42 & the M14.  The Italians held onto all 3 objectives to win. 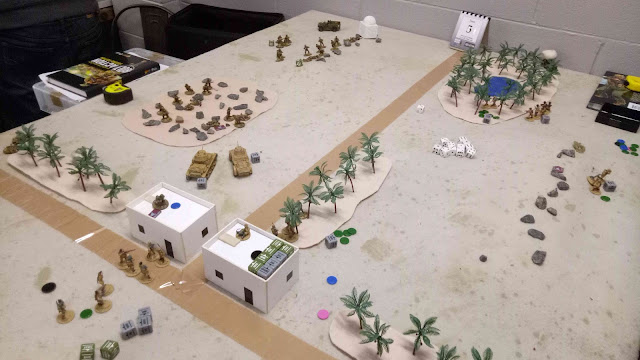 Today John's British para's fought my Italians in a No Man's Land Scenario.  Things looked bad for Italy when they lost their ATR to the preliminary bombardment & their Howitzer to the British Mortar's first shot.  When John's sniper took out the Italian MMG, the Italians were 3 kills down, in negative morale under the Avanti Savoia rule & looking like big losers.  But the Italian armour took our the British Tetrach, suppressed then killed the PIAT & became King of the battlefield.   Then the dice gods paid Italy back for their early horrors when a shot up Bersgalieri unit defeated an assault by an almost full strength commando unit in the oasis.  The British casualties steadily mounted & the Italians snatched a victory. 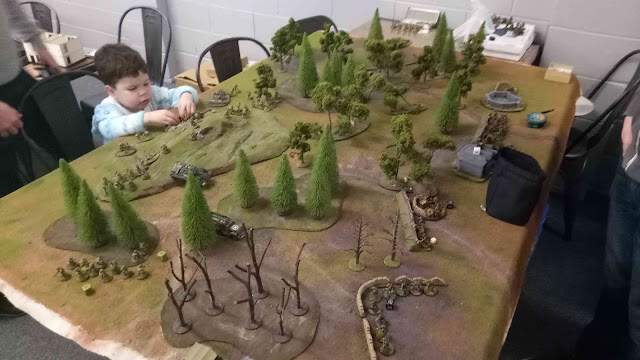 Steve wanted to try out a possible Operation Cromwell list & I'm still in love with my new Italians so it was more Bolt Action at Camp Cromwell this week. 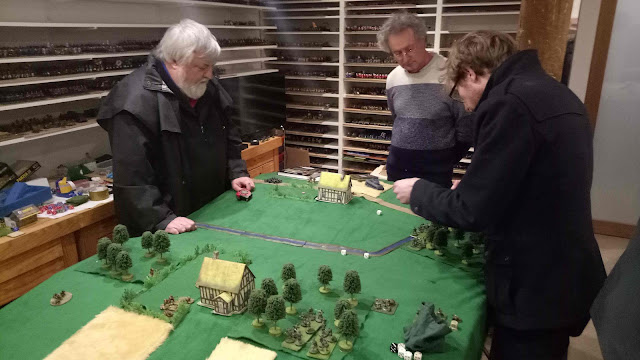 Steve's US Airborne fought a Panzergrenadier army I lent to Mitch in a Double Envelopment Scenario.  Steve's greater experience gave him victory. 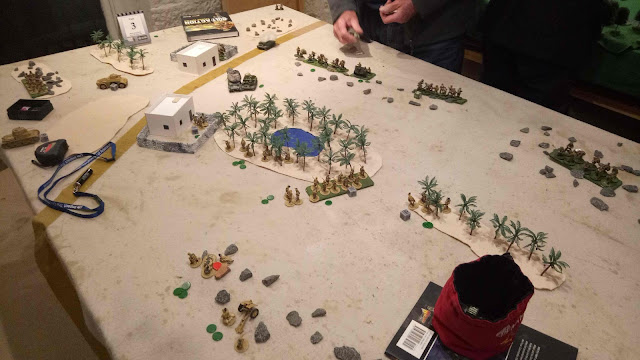 On the other table my Italians won their first victory in a Sectors Scenario v. an 8th Army List I lent to Mike.   After draws v. Steve & Mark & defeat v. Matt, I finally landed an inexperienced opponent my Italians could beat.

Posted by Jim Gandy at Wednesday, September 06, 2017 No comments:

We had two games at Good Games this Sunday.   Steve's new US Airborne took on some of John's Germans.  My Italians fought Matthew's Brits in a Manhunt Scenario. 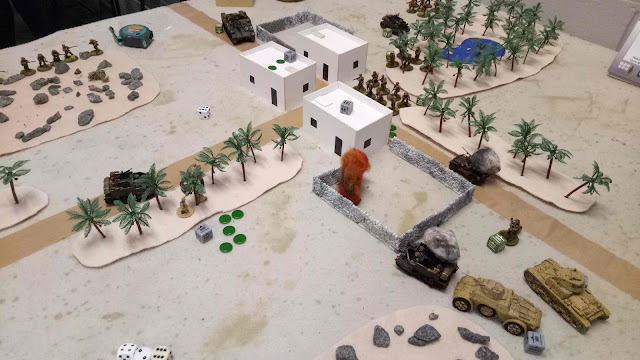 This was the first time I'd fought the Manhunt Scenario having avoided it previously because it looked Mickey Mouse.  To win, the attacker has to capture the defender's highest ranking officer in an assault.  If they kill him with fire it is a draw.  We found that it makes an interesting game but as expected was not a particulary realistic scenario & can easily lead to cheezy tactics.  I realised that to win my Lt had to run away from the Brit infantry attacking the village & tried to clear a path of retreat with my armour past a bug & Piat team.  But the teflon Piat man survived 2 turns of point blank fire from an M14 & an AB42, then got 1st dice next turn & won the 1-on-1 assault on the Lt who had moved from the house to the stone wall (then missed his shot at the Piat man).  While I enjoyed the game, the exercise confirmed my opinion that this scenario is not a good one for a tournament.
Posted by Jim Gandy at Monday, September 04, 2017 2 comments: