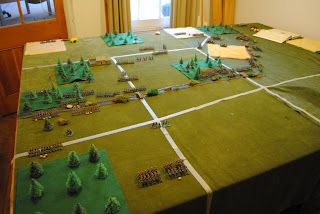 The Black Powder rules are one of the recent flush of new rules sets characterised by beautifully presented books full of photos of exquisitely painted figures.  They cover the period from 1700 to 1900. After a read through I was sufficiently impressed to give them a try in a solo game (being Tasmanian I have no difficulty wearing two hats).  I set up the terrian for the American War of Independance scenario in the book, but then decided it wasn't a good scenario for checking out the rules becasue there was no cavalry.  So I substituted some generic 7 years War European armies & fought a Free for All between Britain + German Allies & France + Bavarian Allies.

The Brits were better troops, the Bavarians worse.

The French held back sending their allies forward through the woods.  The Brits swung to the left to attack the Bavarians leaving their cavalry & guns to cover the centre.  The German cavalry advanced on the right.

The German infantry was supposed to advance through the woods & cornfield right of centre to pin the French centre.  However, the BP command rules determined otherwise.  The German commander blundered and retreated, before refusing to advance for some time.  The cavalry attack on the right was left unsupported and repelled by a French cavalry counterattack.  The British infantry on the other flank attacked the Bavarians in the wood but were unable to shift them and the attack bogged down with both sides too shaken to continue.

By the time the German infantry finally crossed the river, the French flanks were secured and they were able to counterattack.  The Brit cavalry charged in the centre with some success, but the French were well set up and they were repulsed.  The Germans were thrown back over the river and the battle was lost.

The 2nd pic is a detail of the fight in the woods - note casualty & disorder counters.

Summary:  It's an interesting set of rules - a mix of some eerily familiar systems and some quirky ones.  They really are pretty quick to play & easy to learn.  There's no index, but a good layout, a good contents page & headings on the top RH corners of the pages make thing pretty easy to find.  I made a few mistakes at first, but by the end I think had a pretty good handle on it.  I'm looking forward to trying it out with more heads.
Posted by Jim Gandy at Saturday, May 29, 2010 No comments: 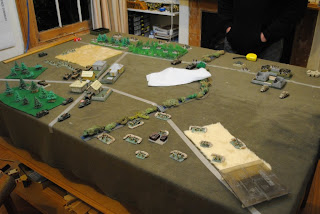 The table had a river dividing off 1/3.  Both sides put an infantry platoon on the objective on the small side of the river & dug in, so the battle was decided on the other flank. 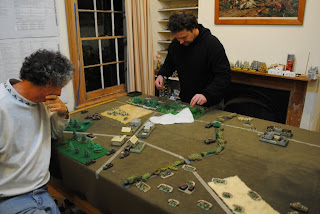 The Germans dug in on their objective with heavy mortars behind.  Their Panthers advanced in the clear ground in the centre. 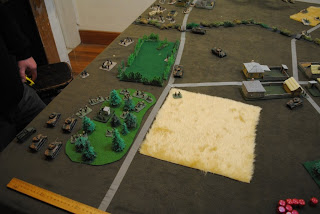 The US advanced immediately on their left with a large infantry platoon using the corn field to cover their advance.  Their armour & mortars lurked behind the central village.  The TD carbine teams moved into the village.  The mortars smoked the Panthers as the Shermans took off to the left to support the infantry.  The Panthers were caught out of the action reduced to long range move & shoot at concealed targets by the smoke and the threat of the 2 TDs drooping in the village behind them if they moved too far.
The US infantry rush though the cover supported by tanks quickly overwhelmed the Panzergrenadiers on the objective giving the US a decisive win.
Posted by Jim Gandy at Tuesday, May 25, 2010 No comments: 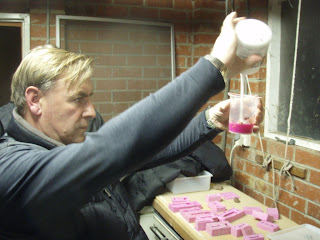 There were the usual dozen or so blokes with 4 FOW games played in between eating pizza & lamingtons.

Kevin gave a demo of how to make moulds & pour resin models.  The method works well for simple stuff, though not so good for complex items like tanks,  guns & infantry - which really require metal for a good job.  It's an economical way of making the second rate stuff like transport, objectives, scenery items, etc.
Posted by Jim Gandy at Friday, May 21, 2010 No comments: 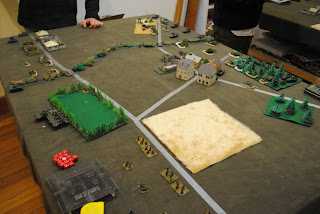 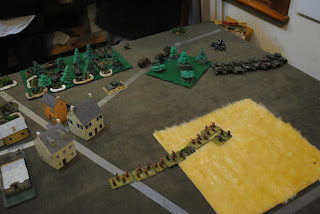 As armour, the Brits had to attack.  They deployed infantry & artillery at the start & waited for their armour & 2nd infantry to arrive before attacking on their right flank.  The infantry used the cornfield to cover their advance withing striking distance of the village.  The Cromwells & Challengers swamped the German anti-tank units platoon by platoon, then supported the infantry attack through the village.  There were some wild swings of fortune as first one side then the other failed to capitalise on opportunities. A desperate counterattack by Panzergrenadiers dripping Panzerfausts might have saved the day for the Fatherland, but the fausts missed. 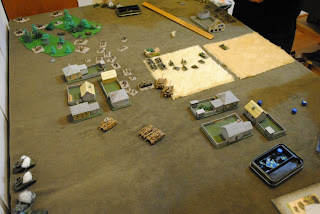 Joe got the better of the tank duel and generally inflicted a lot more casualties, but failures to unpin the Reluctant Vet infantry after the Canadian artillery bombardments delayed their advance to the extent that the Canadians were able to hold onto an objective at the start of turn 6 to win the game.

Both missions are good additions to the mix.

Pic 1: Jim's 2nd infantry advance on the right.  The Tanks come on in the next 2 turns & overtake them to lead the attack.
Pic 2: The massed Cromwells overwhelm the Paks in the corner before turning to the centre.
Pic 3: The Breakout battle begins.
Pic 4: Thye Breakout battle ends.  The Candians hold the far objective beside the cornfield & the Germans aren't quite withingdisputing distance.
Posted by Jim Gandy at Tuesday, May 18, 2010 No comments: 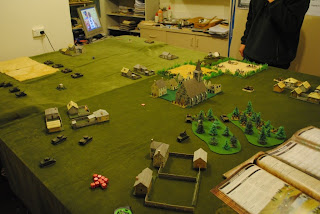 The Mission is a twist on the Encounter Mission - with distinct differences between Attacker & Defender.  Both sides have only half on the table, but the Defender has Delayed Reserves while the Attackers are standard Reserves & the Defender has one Immediate Ambush.  The reserves come on anywhere on the rear edge, not diced for location as in Encounter.  The objectives are different too, with the attacker having 2 to go for, but the defender one.  Apart from taking an objective or causing morale failure, the Defender wins if the Attacker doesn't or the Attacker isn't over the centre by turn 6.

The Germans started a Sperr, 105's, Heavy Mortars, 88's & Pak 40's (ambush) on table & Sperr, Pioneer, 150 inf guns, Hetzers & Stugs to come.  The Brits started with their 2  infantry & Sextons on the table, with 2 tank platoons & 6pdrs in reserve.  The table was open on the German right but cluttered on their left.

The Brit objectives were in the centre & on the German left.  They started by advancing infantry & HQ on their right.  This drew the Germans to the left, but when the Cromwells arrived they were brought in on the left and the HQ switched that way as well while the infnatry hunkered down in the town & woods.   The swarm of Cromwells worked their way though the German right, but then found that the centre objective was just within 100 of Pioneers on the other side of a hedge causing a stand-off.  On the other flank, the Hetzers counterattacked.  They popped the 6pdrs, but the Brits droped smoke on them then charged them form both sides by infantry.  The infantry charged home & though they got no kills, the Hetzers failed morale & could not escape the ring.

With no armour left, their antitank & artillery depleted, and the Cromwells moving back towards the now poorly defended left flank objective the Germans conceded.

The pic is taken from behind the Brit right.  The Mission seems to be an improvement on Encounter - it's nice not to have to dice for where your reserves arrive & the clear attack/defence roles is good.   Not sure how or if the big table affects balance - both sides reserves have further to go.
Posted by Jim Gandy at Saturday, May 15, 2010 No comments:

The Allies used lessons learned and this time advanced on two roads to provide some redundancy in supply arrangements.  It consequently took longer for the main column to reach Nijmegen this time, but they got there in the end after some scary German counterattacks were beaten off.  A well timed assault on Arhem Bridge by the Paras at the end of game turned the game into a solid Allied victory.  Again a game of exciting swings of fortune, but with both sides in with a chance right to the end.

Nick called in for a time - he's back from Paris for a short break, but off again soon.  I've also also found out what's happened to Barrie - he's also joined the foreign legion & won't be back until July.
Posted by Jim Gandy at Tuesday, May 11, 2010 No comments:

Firestorm Market Garden as a Boardgame 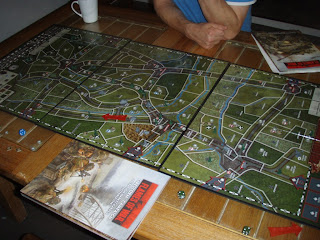 My first impression of Firestorm Market Garden out of the box was that it would be a good boardgame.  I was not disapointed.  We took about 3 hours to set up and play it for the first time (with a good bit of time lost looking up the rules) & both of us had a great time.

The Brits dropped their paras all over the shop to disrupt German reinforcements, then charged straight up the central road.  The first turn got the head of the British column almost to Nijmegan Bridge.  It all looked too easy - and it was.  The German reinforcements came on & the Brits spent most of the rest of the game grimly defending their over-extended and inadequately defended line of supply.  For some of the time both sides' main forces were out of supply - the Germans striking at the long Brit LOS while the Allied paras made judicious attacks in the German rear.    By the end the Paras had taken Nijmegan, but not Arnhem & the Brits had come off worst in the tank battles so the Germans won a minor victory.

The game features rapidly swinging fortunes, but there are enough dice to roll to expect the luck to even out.  But wild dice suits the scenario - the real campaign was a big roll of the dice by Monty.

I liked Bagration as a board game too, but this is better still - Monty really did set up a great scenario & the Battlefront chaps have done a good job with it.   The supply rules are simple but very effective - the game's all about supply as it should be.  With the airbourne dropping about all over the place and the German reinforcements coming on from all directions it's a real challenge with lots of options for both sides.   In this game, the Brit plan of simply charging up the central road left their line of supply vulnerable, but it got troops near the objectives and it was close run thing in the end - if the final Para attacks on Arnhem Bridge had been done just a bit better it would have turned the VPs round to minor Brit win.
Posted by Jim Gandy at Saturday, May 08, 2010 1 comment: 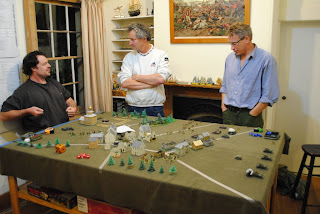 We had a first look at the Firestorm Market Garden Package.  As with Firestorm Bagration it can be played as a campaign, or as a boardgame.  There are also 2 stand alone battle scenerios and 2 new generic Missions.

With me going OS at the end of the month a campaign is not on just now, but the stand alone battles & the boardgame look well worth the price of admission on their own.  The boardgame has generally the same rules as Bagration, but the supply is different, there are airdrops & a unique strategic situation with lots of different options.  It looks like a very good game.

Tonight we did one of the battle scenarios.

The Brits have to attack & take objectives quickly.
The Germans put up a sound defence & withstood the attack without too much difficulty.
The Brits found plenty of excuses:
1) Too many of those damned L's on Steve's Lehr dice.
2) The Brit commanders both excelled at failing infantry saves.
3) A new scenario is aways harder for the attacker.
4) The terrain was knocked up quickly & had a couple disrepancies that didn't help (though the Brits didn't make full use of the available cover anyway).
5) One of them had a cold.
Posted by Jim Gandy at Tuesday, May 04, 2010 2 comments: