A quiet one at the Gaming Garage, with just two games.

Flames of War - Nick vs John.  1750 points late war.  Nick had a German Sperrverband.  John had some nasty combination of cossacks and T34-85.  A hold the line scenario.  The Russians attacked in a solid wave of nasty troops.  German shooting was ineffective, and before you knew it the Germans were down a Stug III and all four Hetzers.  A Pak40 ambush wiped out the T34/85's.  The Cossacks charged the Pak 40's, but John misdirected his charge, and the Germans were able to hold the cossacks off with defensive fire.  At this point John had to go.  The game was still on a knife edge.

Hail Caesar, Athens (Tony) vs Sparta (Nick).  Nick rolled an unholy number of 6's, but even that couldnt hold off the better strategy of Tony, who used his cavalry to roll around the Spartan flank and hit a Hoplite phalanx in the rear.  The game was fast and quick -- good fun!
Posted by Nick at Monday, June 27, 2011 No comments:

After some 15mm trials, Hail Caesar looks like becoming the Ancient Rules of choice at Camp Cromwell.  While the old 15mms work fine for Hail Caesar, and we intend to continue using them, 28mm is the flavour of the month/decade and it is the scale that new wargamers are building.  28mm figures are arguably easier and more satisfying to paint than 15's, are cheap and readily obtainable from Area 52.  And there is no doubt that 28mm battles look great.  So some of the group have, or are working on, 28mm ancients, though as yet none of us have enough to make up a whole army.

Hail Caesar is ideal for group play with each player commanding a division or two of his own figures. So if enough of us chip in and paint a division or two we will soon be able to fight reasonably sized battles in 28mm without anyone having to make a huge investment in time or treasure.   Jim will be back from Gaul in mid August which gives us a nice time frame for those interested to paint up their division (or more if they like) ready for kick-off in late August.  The era we are working on is from the Punic Wars to the conquest of Britain (which is the era covered by the plastics stocked at A52).   So far we have Steve Page working on Romans & Numidians, Steve Jendrich on Romans, Munt on Hoplites (close enough to Carthaginian spearmen) and Jim is recruiting Gauls in Gaul.

If you want to join in, either painting up new 28's or using some you already have please let us know.  The more people we have involved the better.
Posted by Jim Gandy at Tuesday, June 21, 2011 No comments: 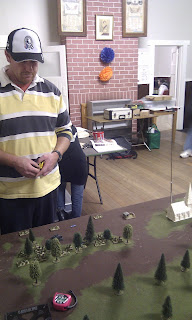 Nick vs Rob -- A US training exercise, with both players trying out 1750 late war US lists.  Nick beat off Rob's assaults, but couldnt counterattack before time ran out.  A draw - but both players learned a lot.

Daniel vs Shane.  Shane is a new convert, and has dived in to Panzer lehr.  There were Panthers and Panzer IV's everywhere.  But Daniel had Russians with Sturmovicks, and there seemed to be a lot of burning Panthers from the air strikes.

Pic is Rob deciding on his next devilish move.
Posted by Nick at Thursday, June 16, 2011 No comments: 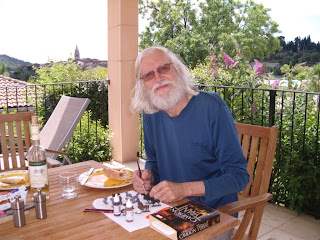 There aren't any notable battlefields in Languedoc, though Hanibal did pass this way.  No detectable wargaming clubs or shops either.  But there are compensations:  Plenty of time to read the good supply of books I brought along.  And painting Gallic cavalry on the terrace with a glass of exellent E3 plonk, baguette, jambon & fromage ain't bad.
Posted by Jim Gandy at Friday, June 10, 2011 1 comment: