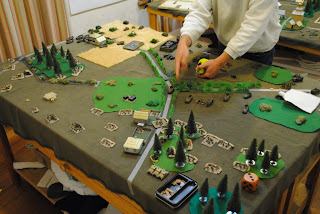 The Germans attacked on both flanks. On their left (right of pic) the half tracks were stopped by a combination of artillery & Pak40s.  On the other flank the Panzergrenadiers steamrolled the Hungarians in the wood and got to the objective, only to have it pulled up.  They had no hope of getting to the next one so it was game over.
Posted by Jim Gandy at Thursday, April 28, 2011 No comments: 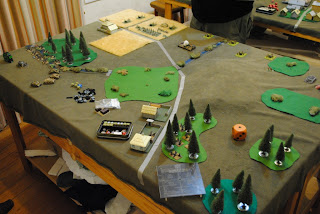 The US started badly when they failed to appreciate the Stuka menace & bunched up his Shermans & lost the lot in 2 turns.

The US advanced on his right with infantry but their reserves were slower to arrive than the Finn's & a combination of infantry & armour in the wood soon stopped the push.

Richard shifted his Stugs to his right and then advanced on both flanks. 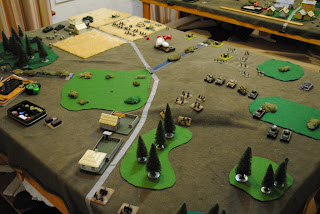 The US put their Honeys behind the hamlet among the cornfields ready to pounce on the adnavcing Finns on that flank, but the Luftwaffe came again with 3 planes, shrugged off the AA & blew them away in 1 turn.

With no armour left, the US were in a hopeless position.  The combined assault of infnatry & tanks through the cornfields couldn't stopped by a battery & infantry remnants.  The US lost the objective and failed army morale all at once.
Posted by Jim Gandy at Wednesday, April 27, 2011 No comments:

A play by email playtest of the FOG version 2 beta rules. Jim as Robert the Bruce, and Mark as King Edward. Played using my FOG scenario for Bannockburn http://fogscenarios.blogspot.com/2010/10/bannockburn-1314.html, and using English and Scottish starter armies.

Thoughts:
1. The scenario didnt make the English vanguard suffer enough. It needs to be further foward and more vulnerable.

2. FOG version 2 seems to be just about identical to FOG version 1. For this battle the only change that had any real impact was the fact that knights are harder to kill - but that didnt come into play. 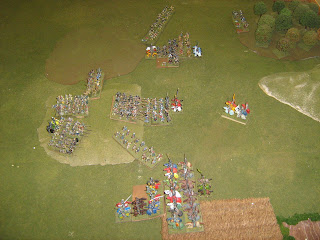 Nick vs Carl. US vs Germans - Hasty Assault.
Carl had a very small very elite force. Only one platoon was on the table at the start, trying to protect two objectives. Nick rushed both objectives, and managed to dig in infantry on the unprotected objective. Carl's reserve of very elite infantry and very elite tanks was simply not capable of pushing the US off the objective by turn 6, especially as Carl was constantly in danger of losing the other objective, and had to keep some forces on the other side of the table. Both sides adjusted their lists for the Kup!
Posted by Nick at Tuesday, April 26, 2011 No comments: 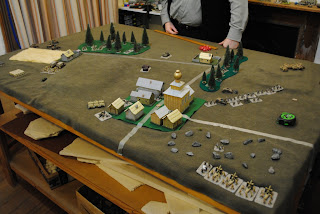 The Breakout Mission is a tricky one, but can produce very interesting battles.  This one featured vicious fights a both ends of the table, with nothing at all happening on the objectives - which were in a free fire zone no one really wanted to go in.  The Hungarians won in the end by forcing an Army Morale test on the US.
Posted by Jim Gandy at Tuesday, April 19, 2011 No comments:

Mission was fighting withdrawal.  Rob launched an assault down one flank, and it was scarily effective.  The defensive ambush and artillery barrage damaged, but did not destroy, two attacking platoons.  The return fire eliminated the ambushers.  By the next turn tanks were in position to shoot at Nick B's artillery, and a furious exchange of fire over open sights ended with the artillery down to one gun, but the tanks failing morale.  At this point Nick B had nothing that could stop the assault on the objective, but Rob ran out of time to get the coup de grace in.  Victory to Nick, but if the game had gone on for another 30 mins it would have been victory to Rob.
Posted by Nick at Tuesday, April 19, 2011 2 comments: 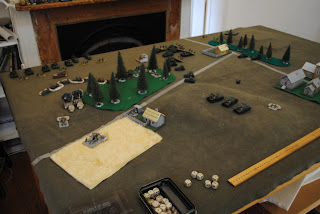 The Germans put their 2 infantry and Marders down near the large wood to try and make the wood as a fortress.  The werfers deployed in the wheatfield and 2 Tigers, 3 Pumas & 2AAHTs had to be left in reserve.

The LH infantry made it through the woods & dug in on the LH objective & the Marders took up a position on the far edge of the wood covering the objectives.  The RH infantry got into position on the edge of the wood to dispute the objective, but were hit by massed fire & pinned down before they could dig in.  The Tigers came on and doubled forward down the left flank, but the Russian reserves came on with 5T34/85s and with double shots destroyed the Tigers.  The Marders & infantry took revenge almost destroying the T34's & attached infantry, but the survivors passed morale.

The Pumas came on in the Russian rear, their path to getting into the action was blocked by a wood and a couple of infantry.  They tried to push through the infantry only to throw a string of ones & get themselves destroyed.

The ISU122's wandered about doing little except pop a couple of werfers, while the critical main attack was launched in the centre.  The T34/85's took out the Marders and infantry leaping out of half-tracks with smgs & a flamethrower made short work of the depleted P/grenadiers on that side of the wood gaining the objective.  The Germans had no way of taking it back.

This was bad Mission roll for the Panzergrenadiers - forced to defend with the mobile reserves rule making their Armoured halftracks useless & putting too much of the army in reserve.  The Germans lost a bad gamble in doubling their Tiger where enemy reserves would get double short range shots, and had rotten luck with their Pumas, but there's no room for error v. experienced Ivans.
Posted by Jim Gandy at Saturday, April 16, 2011 No comments: 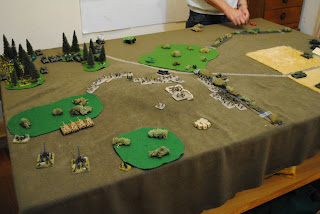 The Germans put a crowd of infantry & Paks in the corner of their deployment zone, artillery in rear, Hetzers behind, Stugs & AA in reserve. The Russians put T34/76s on one flank & IS2’s in the other. T34/85 & Strelk in reserve.

The Germans got good Stormtrooper & digging-in dice and were dug in on the objectives on after turn 2. The T34’s engaged the German artillery and picked off 2 before the Stugs came on from reserve and the Hetzers popped out to distract them. The IS2s engaged the Paks in a long duel, eventually destroying them, but losing 1 tank in the process. 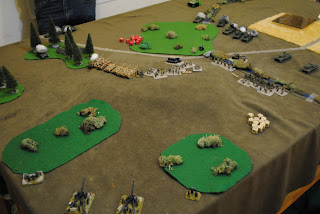 The Russians brought their Strelk in on the T34/76 flank & their T34/85s on the IS2 flank. The T34/85s advanced on the Stugs sniping away ineffectually as the Stugs advanced away from them towards the T34/76s. The Hetzers & Stugs got lucky v. the T34/76s which lost 5 killed plus 2 bails then failed morale.

The Strelk tried to rush the objective & destroyed the Pioneers, but were in turn destroyed by a pincer of Stugs & Hetzers.

The T34/85s changed direction to join the IS2’s attack on the infantry, but the Hetzers & Stugs rolled up hull down on the ridge & took them on. The T34/85s quickly died & the Russians failed Army Morale.

Pics taken from behind Germans.
Posted by Jim Gandy at Tuesday, April 12, 2011 No comments: 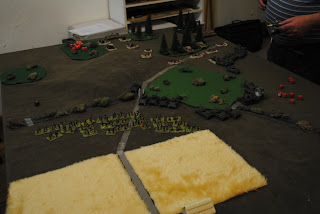 The Germans had Panzergrenadiers dug in on the forward objective with their half tracks in the wood behind, Neblewerfers on the rear objective, 2 Tigers in ambush, 3 small MkIII/IV platoons in reserve & sporadic Stukas.  They had a reasonable defensive table with creek & swamp impeding the Russian advance and a convenient ridge & a convenient wood to hide reserves & ambushes. 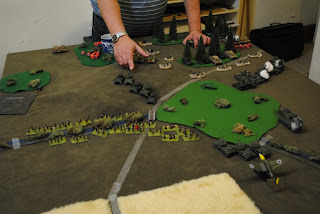 The Russians had a big M/strelk, 10 T34/76, 5/T34/85, 3 IS2 & 3 AAHTs in HQ.  They all doubled forward, infantry on the left, T34/76 on the right, heavy tanks in the centre. The Tigers deployed in the woods & started whittling the T34s away, helped by MkIIIs & IVs coming up around the wood. The Werfers & Luftwaffe started whittling away at the Strelk.  The IS2s halted at the swamp and tried to pick off the Tigers in the wood, while everyone else pressed forward. 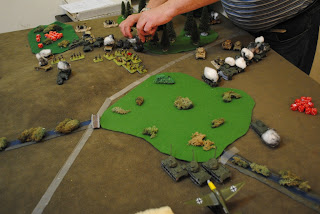 The T34s took out all but 1 of the German infantry before the panzers finished them off.  They took the objective & held it with the AA, but a MkIV platoon contested it.  The Infantry commander passed all tests and retired behind the wood with the HTs to remain in the game. 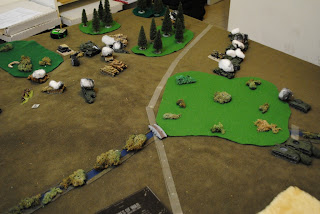 The IS2s blasted away at the Tigers with no sucess while the Luftwaffe continually failed to hurt the IS2's.  The T34/85s took on the reserve Panzers on the hill as the Strelk rushed up in support as the Ivans changed the axis of their attack to the rear objective.  The Tigers had to come out of the wood to help as did the Half Tracks.   The T34/85s took out the Panzers, but the Luftwaffe suddenly got lucky & wiped out the IS2s in one turn (2 killed & the other failed morale) and the HTs & Tigers all but destroyed the Strelk.   The battle was now on a knife edge with both sides on the verge of Army Morale tests & with no HQ.

The Germans had a chance to win with their last 2 HTs shooting at the last 2 Strelk.  They got hits, but all were saved.  Then the Tigers might have finished off the T34/85s, but 1 bail was not enough.  The T34's then finished off the Werfers and the recalcitrant Panzergrenadiers finally failed morale.  The Russians then held the rear objective plus the Germans had to fail Army morale.

At the start the Germans looked doomed with a wall of Ivans rushing at them, but the Krauts are tough buggers, they put on a desperate fight & were unlucky to lose in the end.