Chris & Jim took a trip to the Black Hills for an away game using PeterC's rules.

The Romans are in the near side.  Both sides have put their cavalry on the near flank & bowmen on the far flank.

The Romans advanced their infantry only to the foot of the ridge held by the Visigoths while their  cavalry veered left to outflank the Visigoth cavalry.  The Roman avalry adjacent to the infantry were defeated by a Visigoth counterattack, but the flanking force is wrapping around the Visigoth line.

The Visgoth Infantry is counterattacking.  Their winning cavalry ahs been stopped by the Roman 2nd line. Their right flank is being wrapped up by the Roman flank attack. 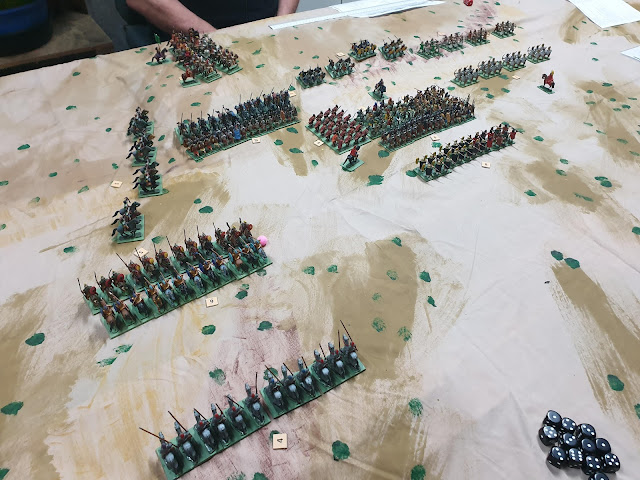 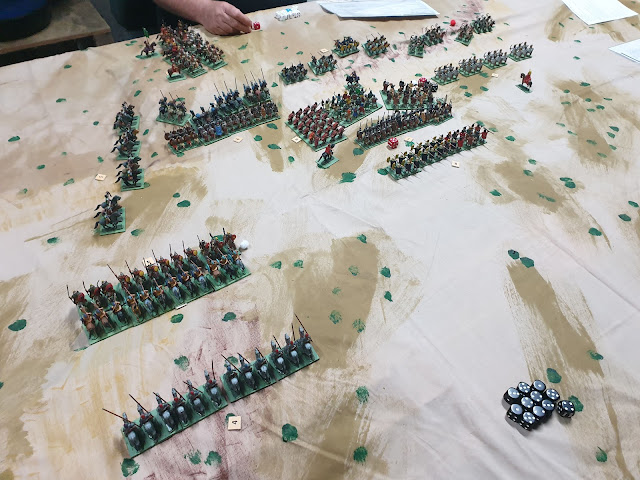 The Visigoth foot has broken under the flank attack & it's War oOer the Barbarians.
Posted by Jim Gandy at Thursday, January 28, 2021 2 comments:

The Romans are on the right with 2 legions.  Their Roman cavalry is on their left & Galacian Allies (foot & horse) on their right.  The Macedonian phalanx has hoplites in reserve behind, elephants & peltasts on their left & cavalry on both flanks. 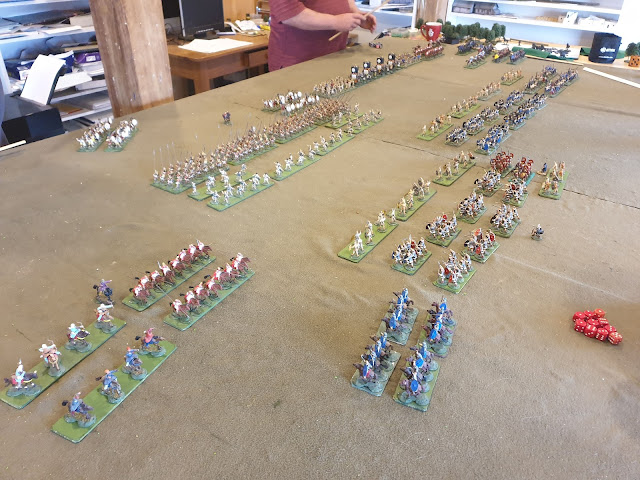 Both sides have advanced in echelon with their right leading. 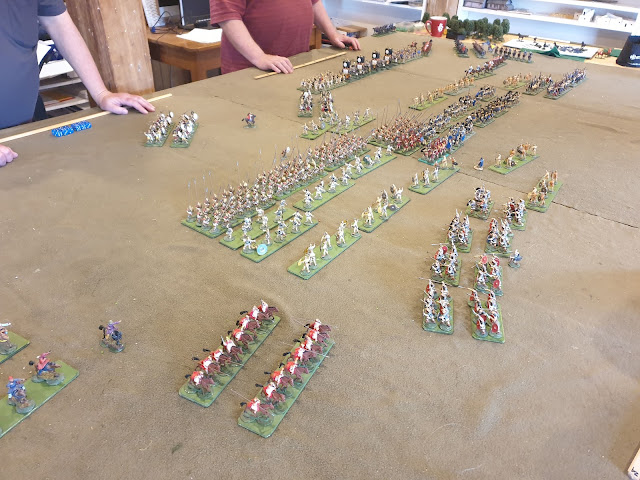 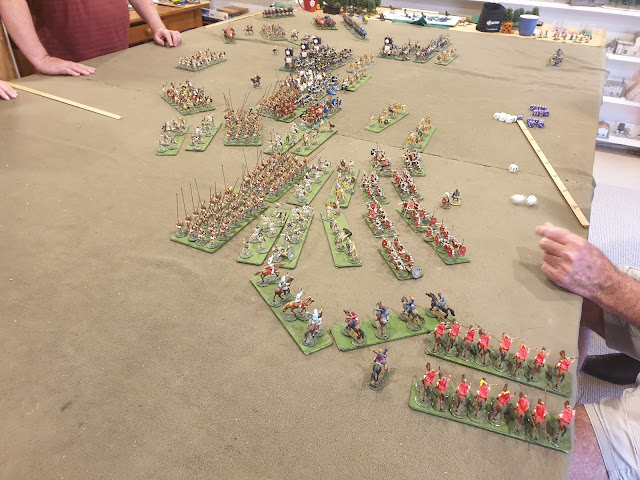 The LH legion is in danger of being outflanked.  The RH legion is fully engaged right of centre.  The Galacian foot is being held up an elephant counterattack.  The Galacian horse is wrapping the Macedonian flank. 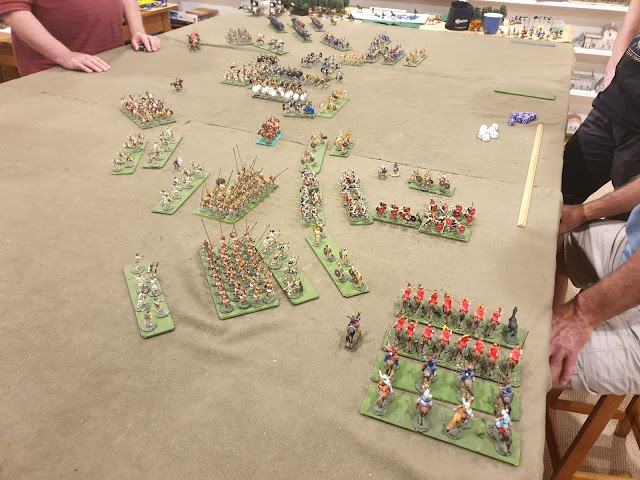 On the near flank the LH legion is holding on.  They have beaten off the first charge of the companions.  In the centre 2 phalanx units & the elephants have been broken but hoplites & peltasts are covering the gap.  On the far flank, the poor command rating of the Galacians when doing anything other than charge forward is preventing them from finishing off the Macedonian left. 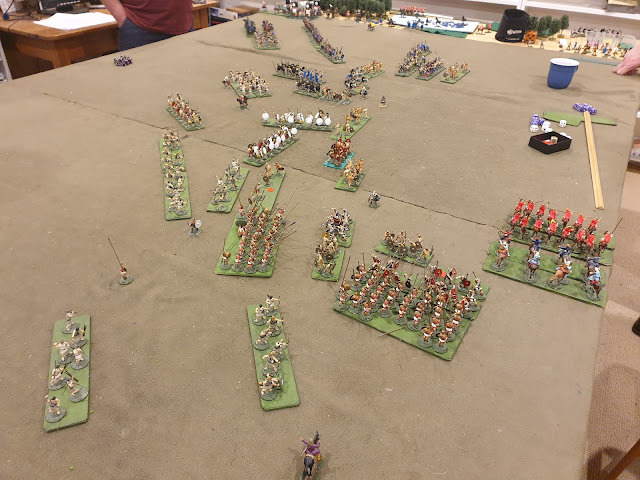 On the far flank the Galcians still haven't finished off the Macedonian left.  In the centre hoplites & peltasts are still holding the line.  On the near flank, the LH legion is still hanging on, but is outflanked by the companions & verging on being broken.

This was the situation when game time was up, thus nightfall.  It was a hard fought close battle.    The only division broken so far is the Macedonian left flank cavalry, though most divisions of each side are verging on it.  Neither force has failed an Army Break Test. Both are outflanked on their left, but the Roman left is outflanked by Companions & doomed, while the Romans have not been able to exploit their success on the other flank - thwarted by the Galacian's poor command & the hoplite reserve. So arguably a costly Macedonian victory.

The failure to reach a decisive result in two & a half hours indicates that the battle was a bit big for a rules-test game.  (There were 40 units on the Roman side & 30 Macedonian units & the big units make combats slower to resolve than in later periods).  But the tweaks to the rules generated by last week's experience worked well.  The balance between phalanx & legion now looks right.

After a long time away in more recent eras as we have worked thru periods from Medieval to ACW in our new rules we returned to Ancients tonight.

The Macedonians are advancing their flanks as the Romans advance right of centre towards the elephants on the left of the phalanx their centre as they redeploy on their flanks to meet the Macedonian threats there.

The skirmishers are neutralising each other as the heavies move up behind them.

The real action begins when the Romans legionaries charge the elephants on the far flank & the right of the phalanx charges the Roman left.

As the legionaries slog it out with the elephants, one of the pigs stampedes forwards causing some mayhem in the Roman supports.

The phalanx on the near flank has broken their opponents as the Macedonian cavalry on their flank finally gets around the flank delayed by bad command dice.  The phalanx in the centre is now enaged.  The far flank remains indecisive.

The cavalry are now engaged on both flanks, while the elephants have been defeated.

On the near flank the Roman cavalry is holding on, but the phalanx is slowly wrapping around the legionaries' flank.  On the far flank the cavalry fight is also indecisive.  The roman attempt to turn the Macedonian flank is partially thwarted by the Macedonian's reserve of hoplites.

The Romans have taken out the phalanx at the far end with a flank attack, but their left flank legion has broken.  Their cause looks hopeless & they concede defeat.
Our multi-period rules have a core that apply to all periods & short sections of special rules for each sub-period.  These sections are generally quite short as most of the differences are covered by availability of different troop types & the relative numbers of them.  But the large variety of troop types & our desire to have more variation in unit size makes the ancient section much longer.  This battle showed up few shortcomings in the first draft, but also pointed to solutions.  The main issue was that phalanxes seemed too powerful.
Posted by Jim Gandy at Wednesday, January 20, 2021 1 comment:

The Confederates storm the whorehouse

This week a scenario where the Confederates have to storm the whorehouse seemed appropriate.  The scenario has the Union defending a village comprising a railway station, a saloon & a whorehouse (the church & school house are a discrete distance down the road).   The Confederates will win if the Union army breaks, or if they have the road behind them cut before dark (10pm real time).

The Union are on the left.

The Rebel cavalry are galloping to the Union right flank after a command delay.  The Rebel inf is steadily advancing.  The Union are redeploying their reserves.

2 Reb inf brigades are engaging the village with 2 batteries on each of their flanks.  The Reb cavalry have dismounted  to attack the Union right flank supported by an inf brigade.  The 4th Reb inf brigade is covering the gap between the two attacks.

On the far flank the Reb muskets & guns are whittling away the Union defenders in the village.  On the near flank the outnumbered Union troops are withdrawing.

The Union is slowly losing units , but still holding out in the village under intense fire, but falling back on near flank.  The Rebs have been able to avoid losses by pulling shot-up units back out of the front line 7 replacing them from the 2nd line.

Though suffering heavy loses the Union still hold the village late in the afternoon.

But the Union right is under intense pressure.