The scenario was #2...Maximum Attrition.  Both sides come on from opposite sides with VPs gained by destroying enemy squads.  We made it 8 turns rather than 6 to compensate for the big table (10x6). 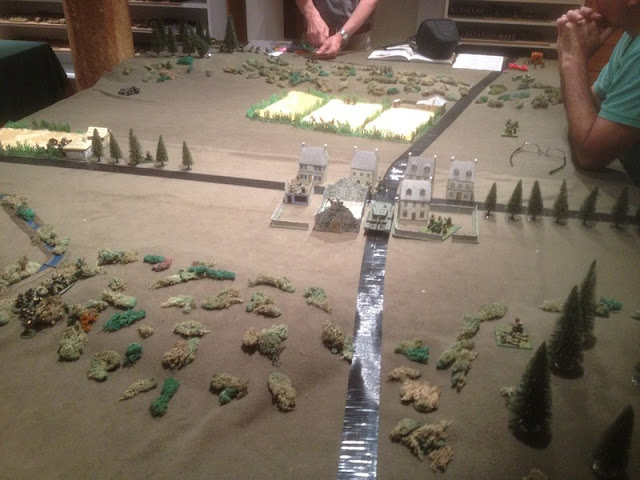 The Germans are on the left, US on the right.  Both sides deployed spread out across most of the front.  On the far flank, both sides had one infantry squad isolated from the rest.  The German vets soon got on top and eventually destroyed their opponents.

In the centre the US advanced through the fields and the town.  The Cromwell moved down the road but was taken on by a Panzerschrek in the tree line.  The Cromwell backed off and moved to the left to intercept the Puma which was advancing on the near flank supported by infantry.

The Puma declined to take the Cromwell on and fell back behind the ridge among the infantry.  With time running out, the Cromwell moved along the ridge to take on the Puma and it's infantry support.  It proved to be a rash move & the Cromwell was knocked out by the Puma.

Meanwhile in the centre a GI squad had been pinned down on the road and destroyed by MG fire from the hamlet on the left.   The allies lost 2 infantry squads and a tank, but they had picked off a MMG, a panzerschrek & a mortar, so VPs were equal and the battle was tie (though a moral victory for the Germans who had clearly killed many more enemies than the allies).
Posted by Jim Gandy at Tuesday, November 27, 2012 No comments:

First Battle at the Ordnance Store

We haven't moved house yet, but after last Sunday's working bee, the wargames room was ready for action.  There's still some fine tuning to do with the set up, but it's looking good.

Mission 1 in the book is a breakthrough mission which counts VPs as: 1 for each enemy squad destroyed plus for the attacker 2 for each squad moved off the far edge of the table.  We compensated for using an 8x6 table by allowing 8 turns rather than 6 & restricting the attacker's exit zone to the middle 6'. 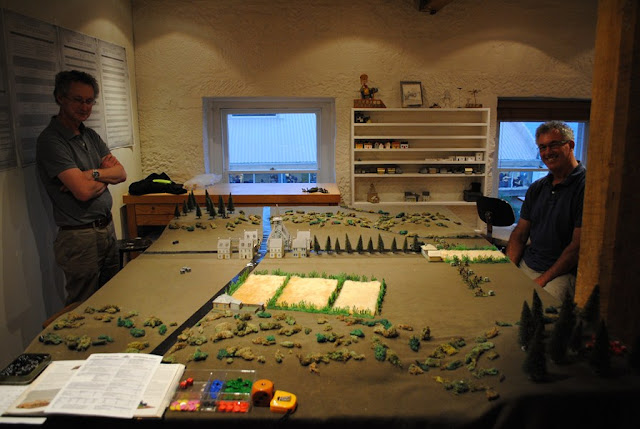 The US attacked up the centre with 2 squads and the Cromwell while the 3rd squad made a flank march on their right.  The Germans mounted an active defense, counterattacking the infantry in the centre and destroying it with rifle & mg fire.  The Cromwell destroyed one squad, but the 2nd infantry squad moved up with a panzerfaust and took it out. 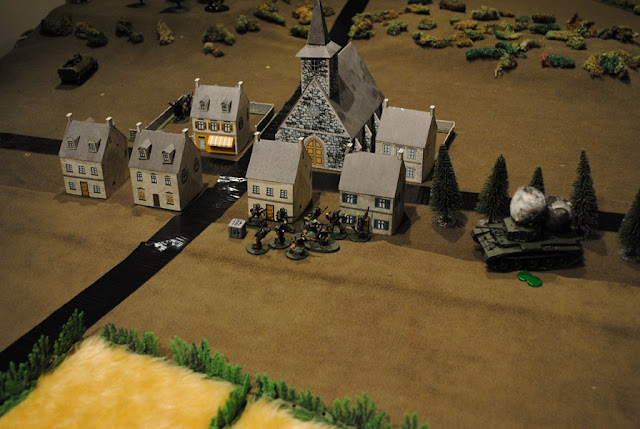 The 3rd US infantry squad came on well down the far flank and made for the rear edge.  The Sdkfz 250 headed off through the woods to stop them, but it was attacked and destroyed allowing the GI's to exit the table & gain 2 VPs.  But it wasn't enough, the Germans had mopped up the rest of the US force while losing only 3 squads themselves to gain enough VPs to win.

We got into some new territory with armour v. infantry & had to spend a bit of time hunting for unfamiliar rules (not always where you expect them to be), but it still went well & we all had a good time.  The 28mm's sure look good & certainly improve the game over the 1/72 scale we'd used previously.

Next Sunday the Camp Cromwell  HQ is moving to new quarters in the Ordnance Store in Castray Esplanade.  (We are downsizing from a big house to an apartment).  It's a pity to lose the Cromwell St address, but an apartment in an old Ordnance Store isn't a bad wargamer's address either.  The building was built in 1836 as the military store for the colony, located right next to the Battery Point battery that protected the port.  The new games room has less square metres than the old, but as one 5m square room it's a more efficient space. 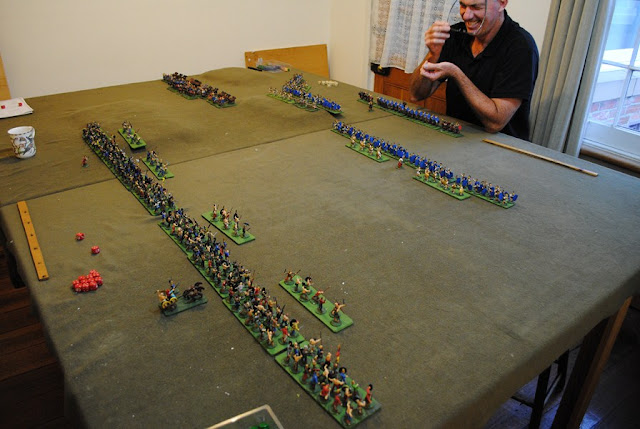 The Romans are on the far side of the table, deployed with infantry in front, cavalry as a central reserve.  The British have their chariots & cavalry on their left.  Initially only the British cavalry has advanced while the Roman right has been curled back. 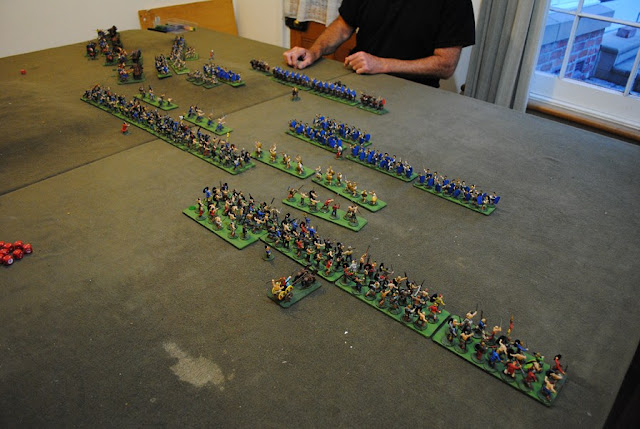 The Roman right is engaged with the chariots.  Their left has moved to the right to make a gap for their cavalry.  The British infantry is stuttering forward. 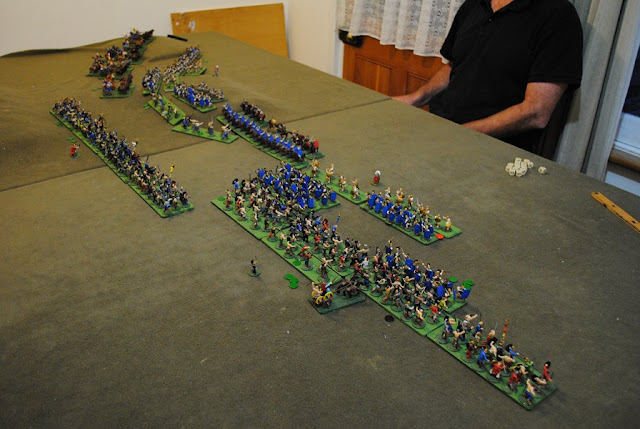 The infantry on the near flank are slogging it out.  The Roman horse is moving forward. The chariots are getting ready to attack. 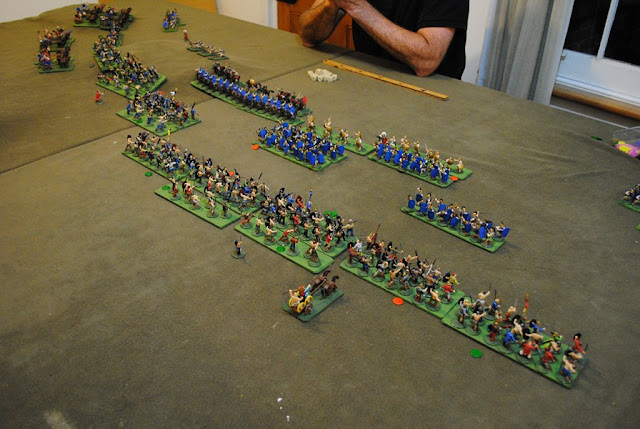 On the far flank the chariots are now supported by infantry and the Roman infantry are under pressure.  On the near flank the infantry fight has broken apart. 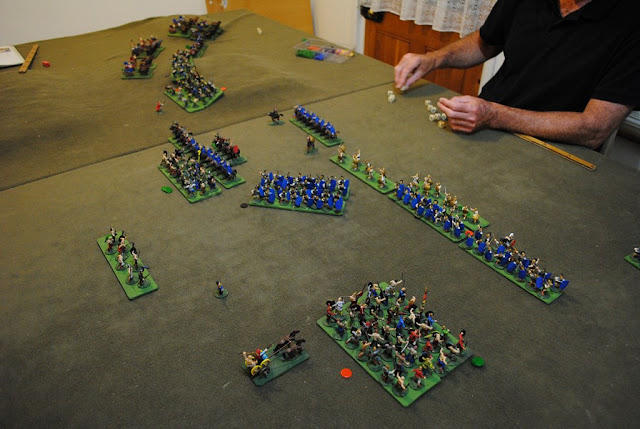 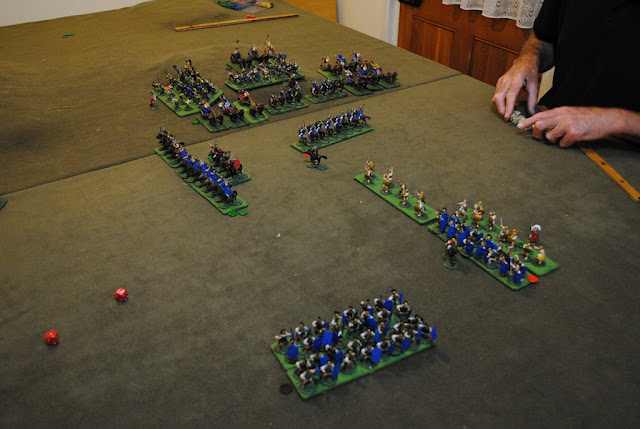 The British left has been broken by the Roman foot.  Their centre has been destroyed by the Roman horse.   But the centre British infantry division still has 2 units left so has not broken and their horse has galloped to the rescue. 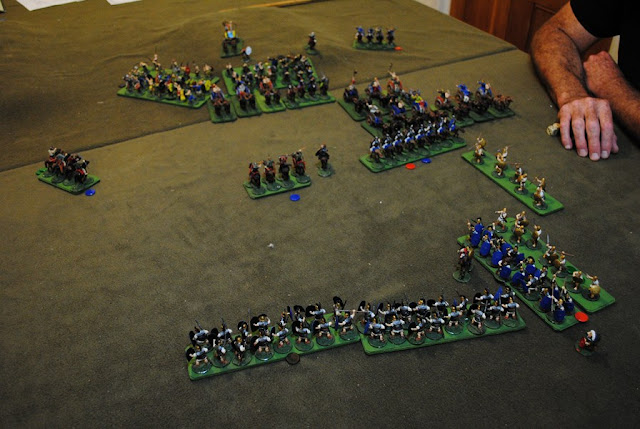 The chariots have smashed into the Roman horse. 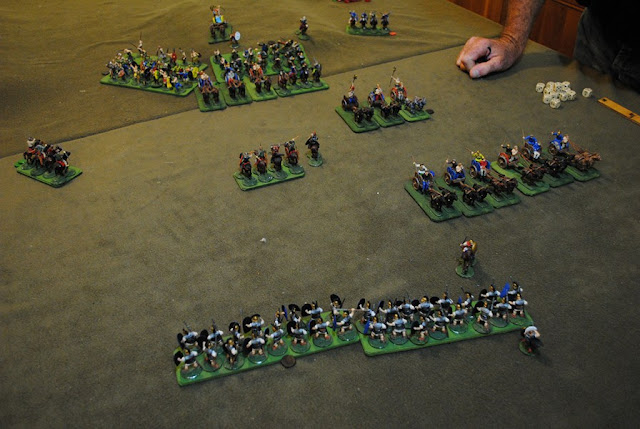 The Roman heavy cavalry has been destroyed & a sweeping advance has taken out an infantry unit by flank attack.  The Romans are down to 2 divisions, both on wood. 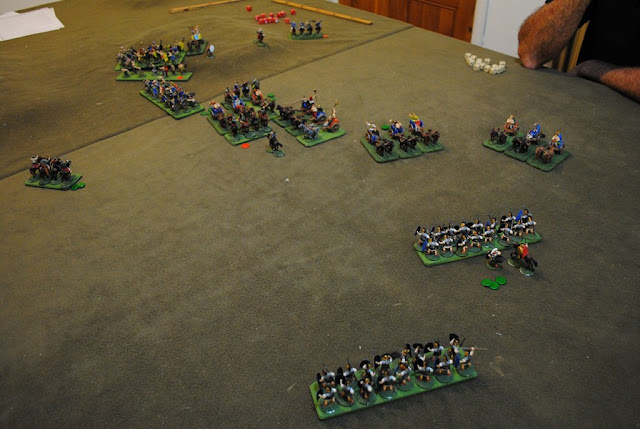 The British horse has taken a Roman light horse unit in front and flank to break the the division and the army. 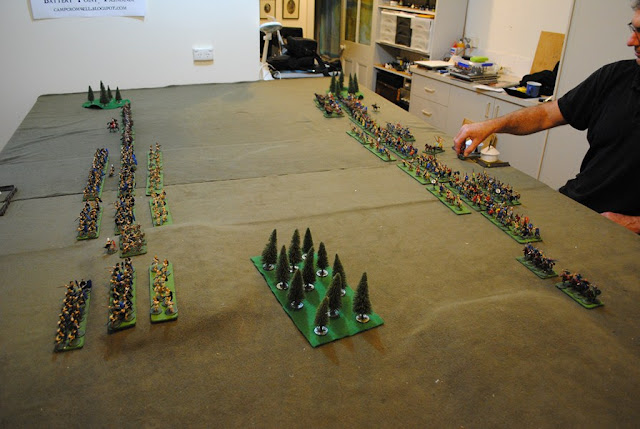 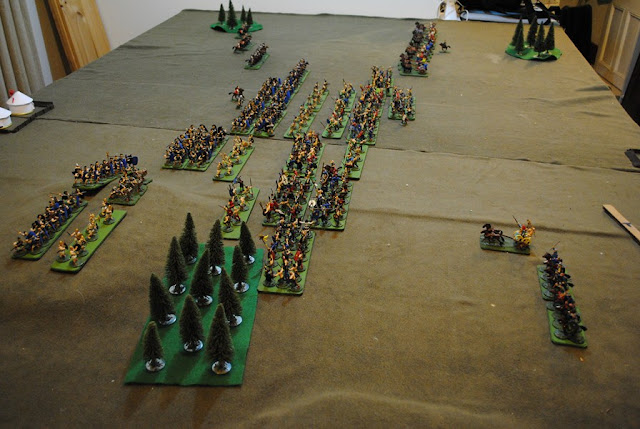 The Romans advanced their centre with the wings echelloned back.  The Britons tried to make a general advance, but the chariots were slow to advance as were the light caavlry.  Bodicia dropped back to hurry up the light cavalry. 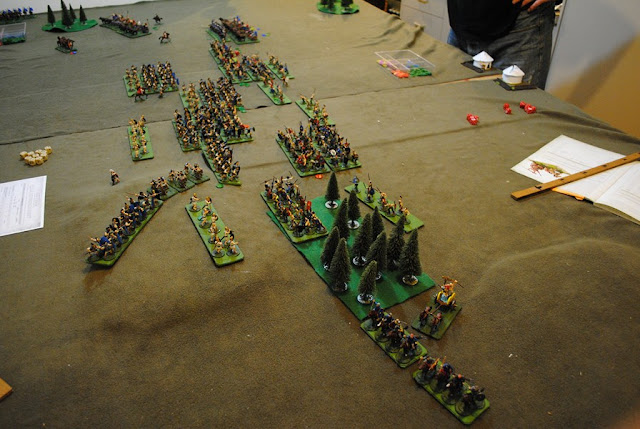 The whole line has engaged with mixed fortunes for both sides.  The Briton light horse is finally on the move. 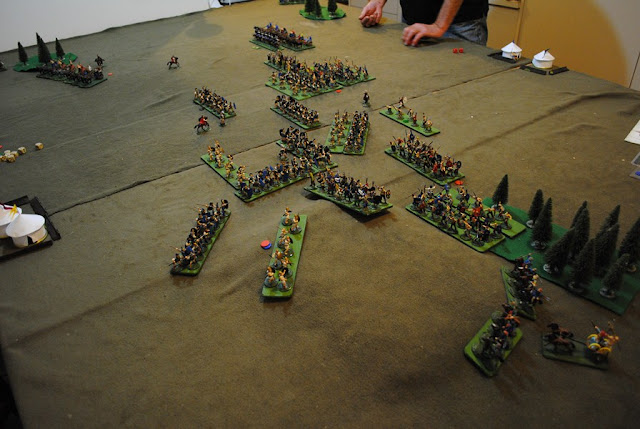 On the far flank the Roman horse is broken but one unit of heavy cavalry fights on stubornly in an ongoing combat. On the near flank the Britons have pushed the Romans back, but the Roman centre has pushed forward.  The Romans use their better command to turn into the flank of the Briton left. 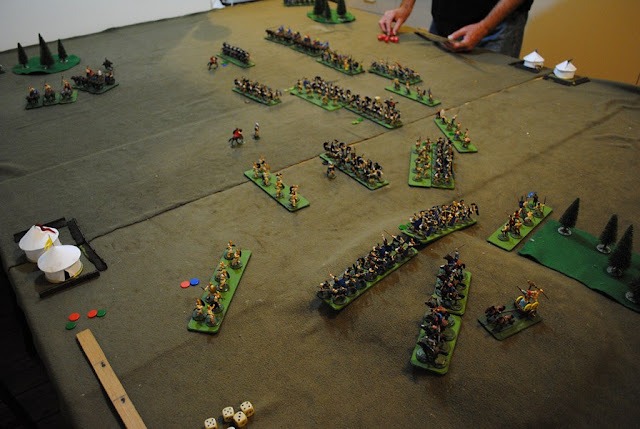 The last Roman horse unit has finally got a fall back result and has to retire.  But on the Briton division on the near flank has also broken - their cavalry have to retire before they even got into action. 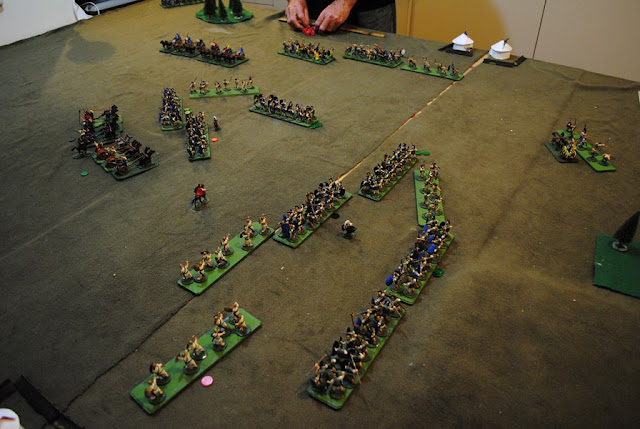 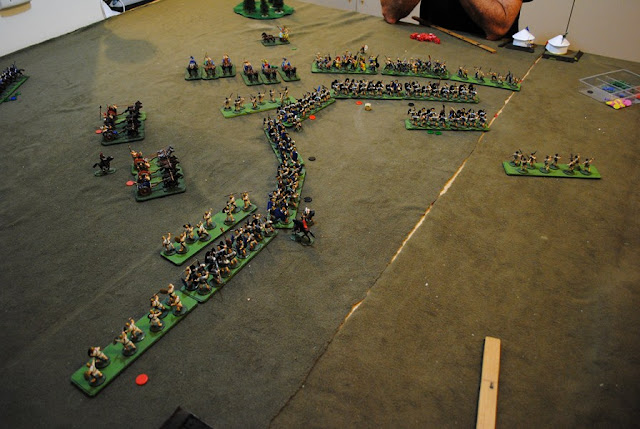 The Roman centre hangs on as a new line is formed as the right flank division splits either side of it to provide much needed support. 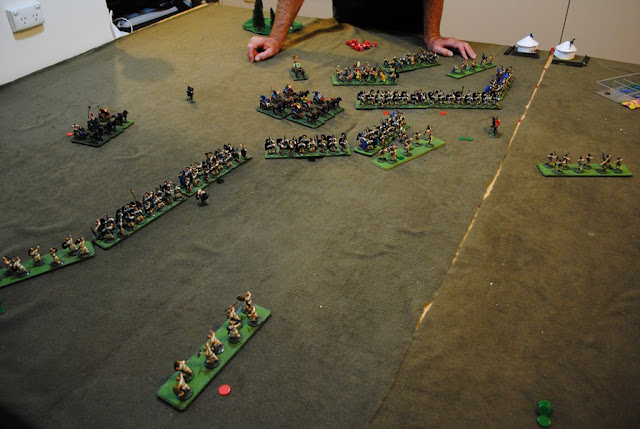 The chariots and legionaries exchange javelins as the Romans slowly manoeuvre their best units around the flanks.  Both sides are on the verge of breaking. 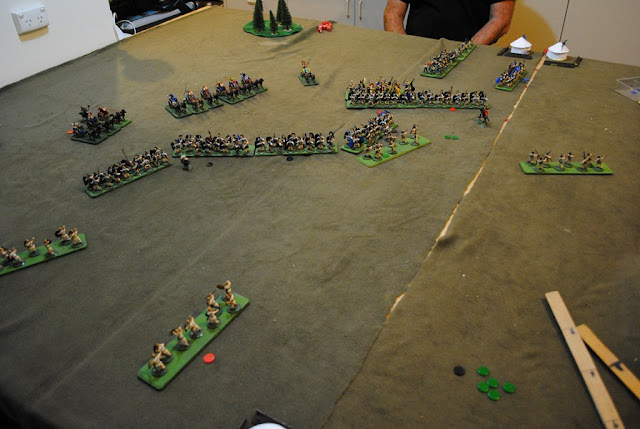