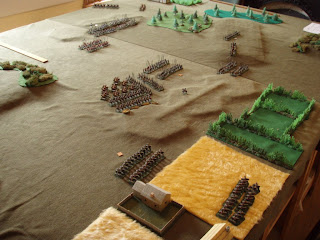 Both sides deployed their main body of pike & shot on ridges with their cavalry opposite each other on one flank (Parl's left). On the other flank there were Royalst musketeers v. Parl's musketeers & dragoons amongst clumps of woods.

The Cavaliers charged on their flank. The Ironsides held back countercharging until the last moment and advanced infantry on the flank of the cavalry. The cavaliers won the fight on the far flank, but a flank attack by infantry saved the other group of cavalry, routing their opponants.

On the other flank the dragoons trotted right round the Royalist flank and across the rear of their main line. One group of Royalist musketeers followed them round as best they could on foot.

The victorious cavaliers pursued to the edge of the table, but rallied on their last chance. While the infantry that had helped the cavalry tried to block the return of the cavaliers, Parliament launched an attack on the right of the Royaltist foot. The Royalsts in turn started an attack with their own left including trying to attack the flank of the leading Parliamentarian foot unit. The Parliamentarians used all their command dice of a turn failing to react to the flank threat, then next turn got the order thru but failed the skill test to make the formation change. This allowed a flank attack which swept the unit away. The returning cavaliers manoeuvred around the Parliament's rear guard & despite losing heavily to the artillery joined in on the rear of the parliamentarian right completing its destruction. With that loss Parliament's morale failed.

The pic is early in the battle - taken behind the Parl's left. Cavaliers are pursuing cavalry in the foreground. Other cavaliers have been hit front & flank. The Parl's dragoons are in the far distance behind the Royalist foot.
Posted by Jim Gandy at Sunday, December 21, 2008 No comments:

The Scotts dug in most of their force while the Panzers advanced on all fronts. The cunning German plan became apparent when they began picking on the Churchills. The right flank Churchill platoon was destroyed by the Panther platoon which then headed right to help against the other platoon. The left flank platoon was swarmed by MkIVs with a Panther attached & won on its own before the cavalry arrived. The loss of the Normandy Tank Platoon meant Army Morale failure for the Scotts & a German victory.

Now Steve's Panzers have to face Jim's 7th Armour for the right to fight James in the final. As James will be away on a trip to Canada until February, they have opted for a best of 3 semi final over January.
Rich's Canadians attacking Renfrey's Grenadiers in a 1500pt Breakthrough on 6x4

This time the Grenadiers gave the Tigers a rest & had 5 Stugs. The Canadians put all 3 Rifle platoons in flank attack. The Stugs attacked the main Canadian force & there was a shoot out with the Shermans & Priests on one flank - which the Stugs eventually won. Meanwhile the M10s & bugs headed around the other flank towards the rear objective dodging Pak 40 shells on the way. The Germans sent a Grenadier to hold the rear objective. They got there ok, but failed to dig in before the 1st Rifles arrived. The Germans were pinned by bug & rifle fire & the assault went in leading to mutual destruction. But this left only 2 SPAA to dispute the objective. 2 more Rifles arrived next turn & overwhealmed the SPAA to take control of the objective.
Posted by Jim Gandy at Sunday, December 21, 2008 No comments: 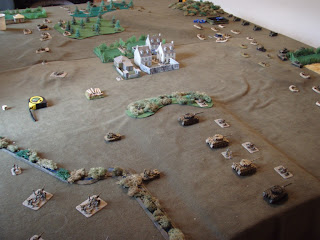 Renfrey had 4 Tigers plus supports. Rich had his usual mix. Renrey attacked on his right with the Tigers supported by the HMGs & SPAA. Rich attacked on his right with infantry & bugs. Rich's attack went well at first, the bugs & mortars caught a Grenadier moving up & destroyed it & the Aircraft took out most of the Pak 40s (it's only acheivement). But then Renfrey threw hot dice when the Rifles attacked the objective & the 2nd Grenadiers held on. The German attack was met with the M10s, 6pdrs & Shermans. Renfrey 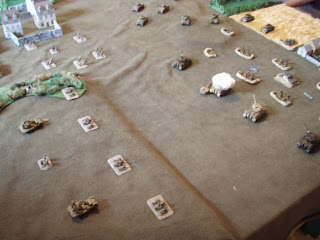 sent the 3rd Grenadiers from the centre to the right to help the attack, but it was intercepted by the Shermans & artillery & destroyed. Rich got Tiger fever & missed the opportunty to slip the Shermans past the Tigers to take an uncontested objective. Instead, the Shermans were evaporated by the Tigers. Even though partly distracted by killing the Shermans, the Tigers also took out the M10s for 1 loss & the remaining 3 attacked the Rifles on the objective. The Canadian grunts put up a brave fight & got one Tiger with their Piat, but even with 12 dice the 6 pdrs were useless in support and in the end the Tigers prevailed & took the objective.
Pics taken from behind the german right.
Posted by Jim Gandy at Sunday, December 14, 2008 No comments: 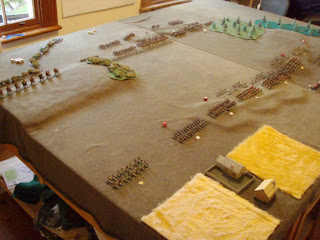 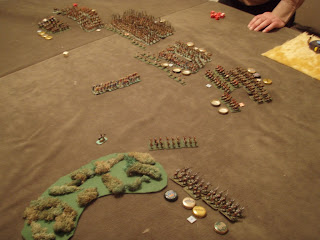 & waited on the ridge in their centre with their heavy infantry.
The Pergumenes won both flanks, but the Seleucids won the centre. The Argaraspids beat the much larger immitation Romans by a flank attack & the superior Seleucid phalanx eventually overcame their opposite number. A few other loses here & there was enough to push the Pergumenes below half strength.

It was enjoyable battle with a good deal of manoeuvre. It certainly wasn't a case of "form up two lines & throw dice at each other". We tried yet another variation in the close combat system - it seemed to work real well & it may finally be what I have been looking for.
Pic 1: The start of the battle taken behind the Pergumene left.
Pic 2: The critical point of the battle. From the right right:
Cataphracts returning after beating elephants.
Seleucid Light Infantry & Cappadocians in reserve behind line.
Cavalry fight on the hill - the cataphracts are fighting the Companians & Greek cavalry.. The returning cataphacts charge the Companians in rear, but it's too late to save the others.
The Galacians on the hill are attacked by Cappodians & do beat them.
The 2 phalanxes are slogging it out.
The Argaraspids have hit the Immitation Romans in flank & they are about to rout.
The Pergumene Guard cavalry have hit the Cappodian Cavalry in flank & they are about to rout.
The light troops on the Pergumene right have advanced out of sight as the Seleucids fell back.
Posted by Jim Gandy at Wednesday, December 10, 2008 No comments: 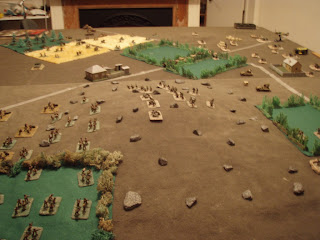 Mark's US Rifles v. James' Grenadiers: 2000 pts LW FFA
There seemed to be an awful lot of Yanks on the table - 12 platoons v. 8 - but then 4 Pussies take up a lot of points. James put infantry on each objective, artillery & werfers in rear & Tigers + AA in the centre. Mark did much the same but his Shermans were put on his left behind a wood & his 3" a/tank in the centre rear covering the open ground. 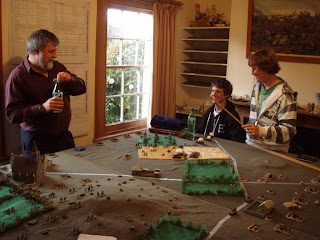 US advanced infantry & their Shermans on the left & AA & infantry on their right. The US artillery & airpower was spectacularly unsuccesful in this phase of the battle, consistently failing to range in.

The Tigers diverted to the right to intercept the Sherman's threat to the RH objective. The Shermans tried to flee, but didn't make it - the Tigers popped the lot in two turns. In the centre, the Grenadier attack over the big hill failed to charge home & they were then destroyed by massed firepower. 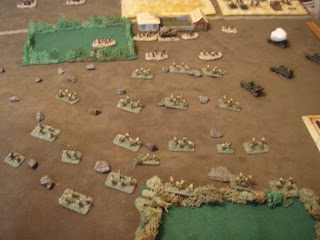 The Tigers turned left and headed for the objective through the infantry & a/tank infested cornfield. They drove back the infantry & got a gun at the cost on one bailed.
The battle was adjourned at that point and continued a week later.
The Tigers pushed forward driving the GI's out of the cornfield, losing 1 Tiger to the 57mm a/tank guns to dispute the objective. The Yanks had one only battered Infantry unit in reach of the objective, but had 2 105 batteries & 2 3" a/tank guns in range. 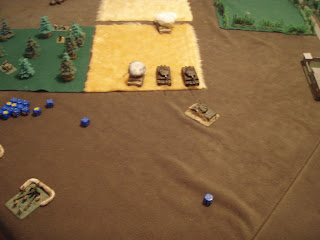 On the other flank 2 US Rifle platoons supported by SPAA attacked the Grenadiers on the objective. Poor prep shooting left the Grenadiers unpinned & the GI's were stopped by defensive fire.

The Tigers sat in the cornfield & mowed down the GIs contesting the objective. The US guns managed to kill only 1 more Tiger leaving 2 holding the objective. James goes through ti the Grand Final.
Pic 1: From the US right.
Pic 2: The battle resumes on week 2.
Pic 3: The US attack on the objective - about to be stopped in its tracks.
Pic 4: Pussies on the objective.
Posted by Jim Gandy at Thursday, December 04, 2008 No comments: 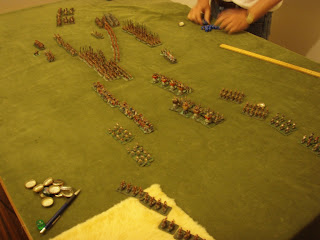 Camp Cromwell Rules. We used the alternate Command Group deployment system to deploy. Both sides tried to weight their left. Steve's left did win, but lost a couple of units in doing so & it took too long to exploit his advantage. In the centre the imitation Romans quickly destroyed the Seleucid peltasts but were then themselves beaten by the Seleucid 2nd line. On the Seleucid left the Capadocian cavalry pinned the cataphracts while the Greek cavalry swept away the light cavalry and wheeled into the cataphract flank. In pursuing the routed cataphacts the Capodicians ran into the Guard cavalry and beat that too. This caused the Pergumenes to fail Army Morale.

The battle ran pretty well despite not using them for long enough to forget a few things. There are still a few loose ends to tidy up & Steve made some suggestions I'll think about.
Pic taken from behind the Seleucid right.
Posted by Jim Gandy at Tuesday, December 02, 2008 No comments: 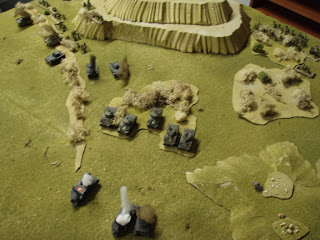 Game 1: Jim's Panzers v. Tony's US Infantry in 1500 pts MW HTL, US defending.
The terrain favoured the defence with a lot of cover on one end of the table & bugger all on the other. The defender got to choose & of course defended the end with the scrub. Infnatry with 3 Bazookas in a gully around the forward objective, 105s on the rear objective & Shermans in ambush.
The Panzers (all MkIIIs & IVs) charged forward in line abreast losing one to air attack on the first 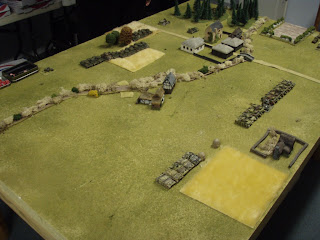 turn & anotehr to the 105s on the 2nd. Then the Shermans popped out of ambush in some scrub close to the MkIVs. The MkIIIs ignored the Shermans and went straight for the objective. They lost tanks to the bogging rolls & to the Bazookas & failed to take the position. The Shermans then turned their guns on the MkIIs & finished them off.
It was a tough ask for the Panzers & they needed some luck they never got. 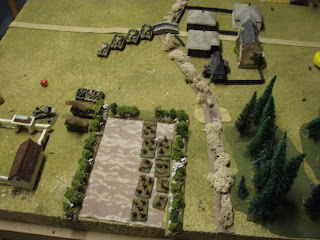 The Germans had lots of MkIVs & Stugs + 2 AAHTs but no infantry. They put their objectives in the open.
The Brits had lots of Cromwells, some Fireflies, bugs with 50cal & a rifle platoon. They put one objective in the closed ground on their left flank, the other in the centre.
Two long lines of tanks faced each other in the centre. On their right the Germans had just their SPAA to face the bugs & rifles.
The Germans crept forward with their tanks - precipitating a slug fest between the tanks. The Brits used smoke to force the Stugs to keep moving with ROF 1, but even so were getting the 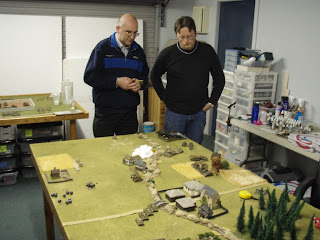 worst of it. Clearly the Panzers were eventually going to win on that flank.
But on the British left their bugs and rifles were creeping forward towards the objective while the SPAA waited behind a hedge. Once close enough, the Brits rushed forward with both spraying the SPAA. The bugs got 1, the Piat missed, but a lowly rifle team got the other leaving the bugs on the objective uncontested. The Germans had to pull a MkIV platoon out of the tank fight to try to reclaim the objective. They opened fire on the bugs, but they used their recon evade to dive behind a house while still within 10cm of the objective. A nervous search of the rule book confirmed that evading teams can still hold an objective & that the Brits had won.
Pic 1: The Panzer burn at the end of the first battle.
Pic 2: An unimaginative deployment from both sides.
Pic 3: The Panzers turn right to take on the bugs.
Pic 4: The German High Command ponder where they went wrong.
Posted by Jim Gandy at Tuesday, December 02, 2008 No comments: