The Ities won the vital dice roll for first turn (despite Barrie's +1).
The swarm rushed forward on the Itie right supported by Lancias in the centre.
The Lancias took out the Lee Platoon while the Semos & M14s took out a Honey platoon.
That left Barrie 2 armour platoons down & up shirt creek before he even got to move.
Although the US got 3 planes on turn 1, and 2 on turn 3, they couldn't do enough damage to stop the swarm over the objective.
The US attack on the Itie left by the other Honey platoon couldn't clear the other objective & it was a 6:1 win for Italia.

FOW on the big table (FFA)

The Russians advanced on both flanks.
SteveJ advanced on the right using a wooded ridge and an Oakie quality series of farts as cover, then engaged in a fire fight with the Grenadiers from the edge of the wood while waiting for the SU152s to arrive. One SU got bogged, the other missed the Tiger and got zapped. The Grenadiers failed morale, but the Tiger & MkIII all but wiped out the Ivan inf and it ran back into the wood.
SteveP on the left called off his attack in the face of heavy fire from Grenadiers, Pak 40s & rockets. Peter began a cautious advance. One grenadier was pushed back by Ivan infatntry, but the other destroyed their opposing infantry & with help from the Pak40s went on to take out the KVs clearing a route to their objective.

A hard fought win to the Germans. The game went on 'till 12.30 - window open in a vain quest for fresh air as Steve & Oakie, fuelled by Xmas cheer, appeared to be engaged in duelling banjos. Steve gained an early lead, but Oakie's showed his vast experience and his staying power came through in the end.

I'm going bush on Monday, but plan to be back on Thursday, so wargames as usual.
Posted by Jim Gandy at Friday, December 23, 2005 No comments: 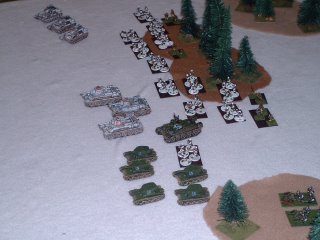 Doug came up and we used his Fins against the Za Stalina standard Russian army. A close battle -- Eventually the Russians were one platoon away from breaking, and the Finns were two platoons away -- but two of the Finnish Platoons were down to 1 team, and another two platoons needed one casualty to break. On the last turn the Russians finished off the two platoons that were down to one team, to win a close fought (and very enjoyable) battle.
Posted by Nick at Tuesday, December 20, 2005 No comments:

Niether side were game to launch a serious attack.
The Germans weren't going to throw themselves in the path of 4 large tank platoons - Lees, Shermans & 2xStuarts.
The US weren't game to adavance on the German a/tank guns.
We spend 3 hours sniping at each other before agreeing to a draw.
It did not seem a very appealing scenario - too much disincentive to attack.
Maybe the scenario needs one side to be Russian - big enough platoons to rush over the roads & have someone left when they reach the other side.
Maybe Barrie's Stalingard table is too intimidating with the wide regularly spaced roads - a more convoluted cityscape would have more avenues for attack.
Maybe using the sewer rules would help.
Maybe a HTL would be better in the city - the NOSB scenario is basically FFA.
Posted by Jim Gandy at Saturday, December 17, 2005 1 comment:

The Poles Advanced around the German left flank supported by Indians on their inside flank.
On the Allied left both sides pretty well stayed behind a ridge in safety.
The Indian attack drove back the left end of the German line but the Poles were held up by 3 Dianas & 2 Pak 40s until Barrie's Panzers arrived and finished them off.
The Poles failed their Coy Morale Test giving the Germans victory (although the Indians had lost very little).
Posted by Jim Gandy at Thursday, December 15, 2005 1 comment:

Chris' Fins v. Jim's Russian Infantry. Hold the line, Russians defending in snowy ground.
The Fins started well with a cautious advance until the T34s appeared out of ambush & decimated 2 infantry platoons.
But the Ivans got overconfident and suddenly discovered how nasty Late model Stugs & Finish Infantry with Molotov Cocktails can be.
The T34s evaporated and suddenly the Fins were on top.
A desperate Russian counterack helped by bogging rolls in the snow took out the Stugs, but the Russians were too badly weakened to win.
It was a slow death as the Fins advanced their A/tank guns & mortars to finish off the last resistance.
As we started off on the premiss of having a quick game from an early start to see how a time limit would affect a HTL, the Russians dubiously claimed victory 2 times (still holding objectives after 1.5 hours and then 2.5 hours) for one defeat (after 3 hours).

Doug's Fins v. Chris's Russians. Another Russian defence HTL in the snow.
Doug brought his own Fins - based for other rules & with some ring-ins, but still serviceable.
Chris put up a tight defence. Doug did well for a beginner (with some rules advice from the Italian attachee), but the KV's were too much for him in the end.
Posted by Jim Gandy at Thursday, December 15, 2005 No comments: 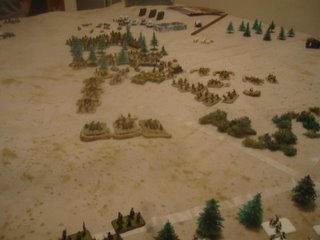 The Russians were fortunate in getting a deployment in 2 diagonally opposite groups with both KVs on the side away from the Pak40s.
The Ities got bad a 6MB deal - all the Fucilieri were Reluctant Trained. They also made a mistake in objective placement - one of them had a well covered line of approach for Ivan Infantry. Leaving the Grenadiers as reserves was also a bad idea (but then getting 3 out of 3 RT for the Fucilieri wasn't expected either).
The 2 Ivan infantry attacking from the right were stopped for a while by the Pak 40's, artillery and the early arrival of the L6s.
On the other flank the 2KV platoons advanced ponderously while the other infantry used hill & forest to get in close & attack the objective. The Itie infantry held with good shooting for 1 turn, but once assaulted ran. The L6s were rushed over to retake the objective and the grenadier reserve thrown at the infantry in their place. The Grenadiers killed a few Russians but bad saves did for them and the horde resumed their advance taking out the Pak 40s, the HMGs & the artillery before the last survivor of the 2 platoons was destroyed by rifle fire.
The L6s bravely retook the objective in the woods and destroyed most of the Ivan infantry in the wood before being destroyed.
The KVs then entered the wood. 2 got bogged, but the Itie infantry had no stomach for a fight, ran from every attack & refused to counterattack leaving the objective to the KVs.
The Russians lost all by 3 teams of the 3 infantry platoons, but even in the woods the Ities couldn't cope with the KVs
Posted by Jim Gandy at Thursday, December 08, 2005 2 comments: 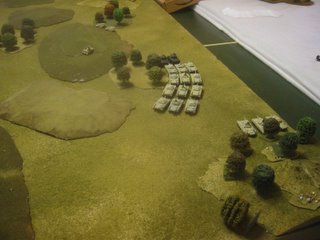 The table was pretty crowded terrain wise & both objectives were on difficult ground hills.
The Ities defended the forward objective with FV Bersaglieri, the rear one with 75mm artillery and with 88s & Pak40 allies in ambush.
Chris charged forward towards the rear objective with a vast column of armour skillfully using the Carriers to keep the ambush's at bay.
The 88s were squeezed into the left flank & zapped the Grants before being buried in smoke from the Crusader HQ.
The Pak 40's had to be put down near the forward objective aimed accross the table. They shot poorly getting just 1 Crusader before the horde ducked for cover en route for the rear objective.
The Brits then assaulted the rear obective with waves of armour as the Ities desperately tried to prop it up with their reserves.
The tanks overran the Bersaglieri, the 88's & the anti-tank guns.
All looked lost for Italy, but help was on the way.
The last reserve - the Itie mortar platoon miraculously wiped a platoon of Crusaders on their own (with the help of bad bogging rolls).
And the Bersaglieri from the right flank had been moved over and arrived just in time to counterattack the tanks on the objective.
The fight was out of range of the Pak 40's & the L6's just wouldn't kill anything, but the Fearless Vet Bersaglieri with Passaglia bombs on rough ground took the objective back.
The Brit command made one last charge to try & win the batle before failing coy morale, but the Bersaglieri did for them too.
The Brits had the honour of losing the battle due to total annihilation (has anyone else done that?)
The Ities on the other hand had their Pak 40's & L6's intact, but had 1 plat with 2 teams & 2 plats with 1 team left - a costly win. 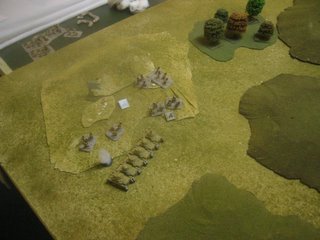 Another exciting battle of wildly fluctuating fortunes.
Posted by Jim Gandy at Wednesday, December 07, 2005 No comments:

Must be Xmas, numbers are down all round this week. Just 3 at camp Cromwell.
Mariusz's Polish Armour attacking Jim's US Mech Inf in a Hold the Line on the 8x6 desert table. SteveJ umpired.

For a while it looked like the Yanks might get up, but the dreaded Fear Nought rule, lack of reinforcements & lousy shooting held the Poles together until their overwhelming firepower turned the tide.

US Comment: This game made it pretty obvious that 1500 point Hold the Lines should be on a 6x4 table - there's just too many options for the attacker on the wide front. For HTL & Breakthrough I think that the table size should match the army size. A 6' front scales to 2250 pts relative to 1500 pts on a 4' front.

For FFA on the other hand the big table is fine for FFA regardless of army size, plus the big table reduces the problem of first move advantage.
Posted by Jim Gandy at Friday, December 02, 2005 No comments: