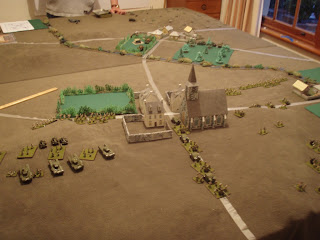 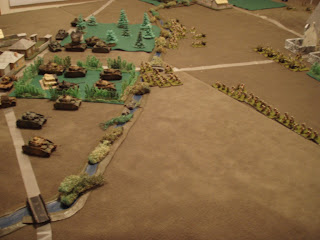 Because of the Normandy Tank Squadron attachment the Scotts counted as armoured so attacker/defender was diced for - thus the Panzers defended. The Scotts made a night attack which allowed them to close up before the Germans could open fire. The Scotts advanced a platoon of Churchills on each flank with infantry & anti-tank guns in the centre.

The Germans deployed MkIVs in the field & wood near the front objective. One Panther was attached to the MkIVs on the left & it alone persuaded the Scotts to hold their right flank tanks back. The other Panthers dropped out of ambush in the wood. The Germans had some success cutting up the central Infantry platoon by advancing to the hedge line then stormtrooping back & the Scottish infnatry all went to ground. But the Churchills on the left mounted a little hill which gave them a good field of fire & they picked off a bunch of MkIVs & AA and the Panthers were whittled away - 1 to 17pdrs, 1 to artillery & 1 to heavy mortars. The Germans just ran out of tanks & failed Coy Morale.
Posted by Jim Gandy at Monday, October 20, 2008 No comments: 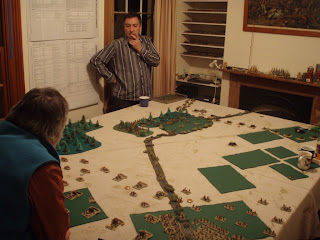 Steve deployed Strelk on his right in cover well in front of the rear objective & his GOW across his rear. Another Strelk was in ambush.
Mark deployed all his Fucilieri in a column on his right along with Brexias & a/tank. His 3 artillery batteries lined his rear. The L6s lurked in the village on his left. Pak 40's & HMGs in the centre.

Scared of the GOWs, Mark made a painfully slow advance with the Fucileri column while digging in everything else. The Stukas & artillery started on the GOWs & eventally the Fucileri got to the centreline. The Russians dropped their ambush around the objective & then counterattacked the Fucilieri. The lead Fucilieri was destroyed but the follow up assault was stopped by RMG fire from teh 2nd Fucilieri. Then the Ities dropped a storm of artillery & rmg fire on the Strelk - dropping it below half . The Strelk then failed morale & the komisar shot himself. The Strelk evaporated allowing the Ities to get a team back across the centreline & save themselves from defeat by the no-one over the centreline rule. But the T34s had come up into a position to attack the Fucileri & the Ities still looked doomed. But then the Regio Aeronautica struck - they took out the command T34 & it all changed in an instant. The T34s were frozen leaderless in the standing crops mostly unable to fire at anything & unable to move - & the 2IC was across the other side of the table.

The Ities now had a foothold over the centreline & had time to bring up the rest fo their force - all the time whittling away with their 3 batteries. The 2nd Strelk tried to cross to objective & take the 2IC to teh T34s, but were mown down by HMGs & L6s. The 3rd Strelk came up, recovered the objective & destroyed the 2nd Fucilieri, but it ran out of men & the 3rd Fucileri finished it off. When the artillery finished off the Anti-tank guns, the Russians had lost more than half & the CIC had died with the 2nd Strelk. The Ities had also taken the objective. 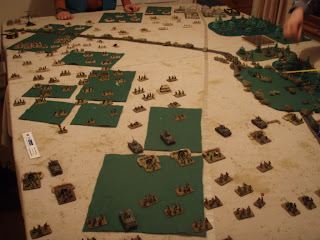 A remarkable battle. Mark seriously stuffed up his attack and was dead lucky to avoid defeat on turn 6 by the no-one over the centreline rule. Then the Regio Aeronautical won the game by taking out the command T34. The T34's would have had to have driven the Fucileri back if they weren't immobilised by lack of command. With them frozen, the Ities bought time for the belated advance of their force and for the artillery to do their work.
The 1st pic shows the start of the battle from the Ities side. The 2nd one is from the Ivan side as the 1st Strelk counterattack to drive the Fucilieri back ove rthe centreline. That horde of Strelk on the objective & in the fields evaporated in one turn. The T34s moved left & forward into the fields to the left of the objective to take over the counterattack when the Stukas made their only kill for the game to take out their leader.
Posted by Jim Gandy at Wednesday, October 15, 2008 No comments: 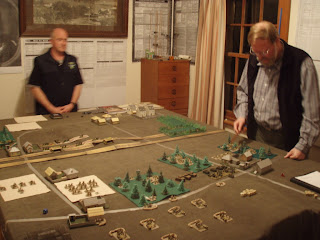 Leigh deployed 2 P/grens about the forward objective on his right + 1 P/gren on his left. Wire covered the whole front & minefields most of it. His right & centre were stiffened by 2 HMG bunkers. One HMG & the Paks were in ambush.
Byron deployed across the front with the tanks in the centre. The Preliminary Bombardment was pretty ineffective - 2 infantry teams & 2 HMGs not really enough for the Ities. Byron initially advanced on the whole front, but held the right back rather than charge the bunkers & pressed on on his right. The Paks came out of ambush, missed the Shermans then got popped by return fire & 47's. The Fucileri on the right just failed to take out the P/grens holding a field there & Leigh was able to reinforce them with the HMG ambush before the next wave came up. This platoon also just failed to take out the P/grens. Meanwhile the Shermans had crossed the wire en route for the rear objective. Leigh's reserves were late coming, but they did come in the end & in time. The Stugs took on the Shermans and a mass of artillery & mortar lined the back of the table. The Shermans lost an unequal fight & the last Italian hope went with them. Byron conceded. Byron's flu last week may well have lost him the match - Leigh got to have a practice match in which he made plenty of mistakes he did not repeat.
Posted by Jim Gandy at Friday, October 10, 2008 No comments: 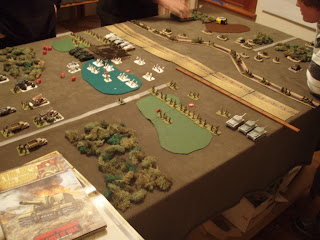 The Germans squeeled like schwein as the preliminary bombardment cut a swathe through their ranks. The Russians adopted a traditional strategy of charging straight forward on a broad front, but they soon discoverered that the preliminary bombardment didn't hurt the Huns nearly enough. Their army began to melt away under intense German fire. The PT34s went through the minefield & the wire only to discover the hard way that ALL the German infantry squads had Panzerfausts. They died & their suporting infantry was pinned down. In the centre the sappers got to the wire but no further, likewise the Strelk on the right. The SUs on the right were stopped by Pak 40s & Panzerfausts. Only the IS-2s in the centre did much for the Russians - they took on the Stugs when they arrived & destroyed them. But enough Paks had survived the Bombardments to whittle the IS2s down to 1 & all the infnatry were cut down. The no attackers over the line by turn 6 rule gave the Germans victory before the Russians failed morale.
This looks like a tough mission for the Russians - clearly the attack has to be made with a lot more finesse than it was tonight.
Posted by Jim Gandy at Wednesday, October 08, 2008 No comments: 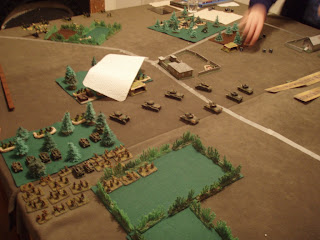 It was supposed to be the Maharajah 2008 2nd Qualifier: Byron's Allied Italians v. Leigh's Panzergrenadiers, but Byrom reported in sick. So Jim & Rich gave Leigh a practice battle.
Leigh's Panzergrenadiers (FE) v. Jim & Rich's Desert Rat Rifles (VB) in 2000 pts Trenchfight, Germans defending.
The Germans deployed first with a Panzergrenadier platoon on each objective, & another + HMGs in ambush. He put 3 lines of barbed wire accross the centre with 2 HMG bunkers.
The Brits immediately saw the weak spots in the German position - fields & woods on the left giving cover for an infantry & no anti-tank immediately available to stop armour crossing the wire in the centre. 2 Rifle platoons supported by 2 lots of bugs attacked through the wood on the left while the tanks attacked the objective directly. One Rifle platoon got stopped by the German 105's but the other one took out half the P/grens & the Cromwells got the rest. But then 2 of the Brit tanks bogged & by dropping a P/gren in ambush in the woods the Germans could counterattack the armour. But it just wasn't their night, the Panzerfaust kept missing, the Cromwells kept passed their bogging rolls & morale tests and the Germans ran out of men to contest the objective.
The Germans made mistakes in deployment they couldn't recover from & their cause wasn't helped by slow reserves either.
Posted by Jim Gandy at Wednesday, October 08, 2008 No comments: 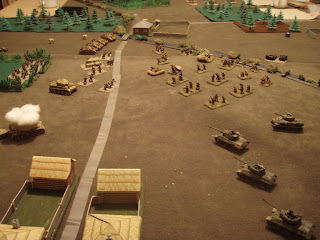 The Germans rushed the nearest objective, taking it on turn 2. Then the battle turned into a slug fest as attack & counterattack disputed possession of it. Eventually the entire infantry forces of both sides were destroyed in the struggle as the armour sparred on the flanks & the artillery had a field day dropping templates on the crowds. The Stugs were destroyed by a combination of artillery & infantry & the M10s by artillery helped by Tiger they missed.

At the start of the Canadian turn 7 the umpires (Jim & SteveJ) realised that both sides were below half strength. The death of the Pioneers in the previous turn should have caused the Germans to test, & the loss of the M10's pushed the Canadians over. The Germans took their test & passed. The Canadians had lost their CiC in the infantry fight & automatically failed. The germans also held the objective at the time - piled high as it was with bodies & wrecked Stugs. After a long see-sawing struggle, the battle had been decided on a single 50/50 dice roll.