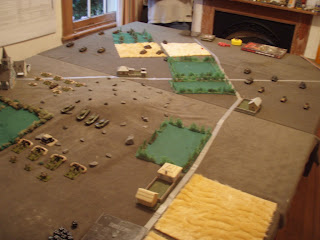 Leigh deployed infantry on the front objective, 25 pdrs on the rear one, Churchills behind the crest of the central hill & 6pdrs & 17pdrs in ambush. Steve deployed Panthers, 2 MkIV platoons, Command & AA on the right, a mixed Panther/MkIV platoon & 20mm AA on the left.

The 17pdr ambush was dropped in the village on the Scott's left. The Panzers paused their adv 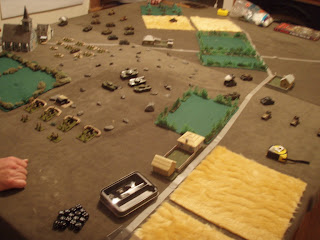 ance & took them on. The 17 pdrs died, but took the 3 Panthers with them. On the other flank the Churchills took on the Panzer platoon & eventually beat it. The Scotts reserves didn't start coming until turn 3, though they came in a rush after that.

On the German right the MkIVs attacked the infantry on the objective. The 1st platoon was beaten off but the 2nd took it. The 6pdr ambush & the 2nd Churchill platoon cleared the Panzers on the objective, but the other platoon retook it. Concealed in the smoke of their burning comrades this platoon was harder to hit, but it still lost more than half. It failed morale, but Steve had the CIC with them & could re-roll. The who 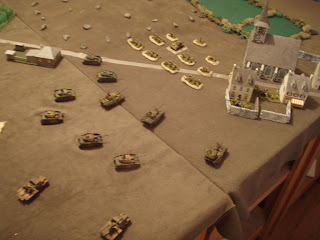 le battle came down to this re-roll - if Steve failed he would fail Coy Morale as well. But he threw a 4, one Panzer stayed unbailed on the objective & he won the battle.

This means they will fight a Free For All to decide if Pic 1: Deployment.
Pic 2: The Panzers advance.
Pic 3: The Panzers pause to take on the 17pdrs in the village. 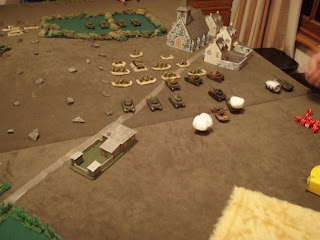 Pic 4: The panzers attack the infantry on the objective.
Posted by Jim Gandy at Wednesday, November 19, 2008 No comments: 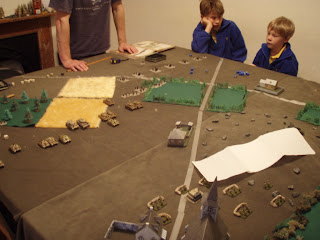 The swarm of Panzers looked pretty impressive as it rushed forward on turn 1. But an ambush of hot shooting 6pdrs made a big hole in it by taking out the 5 MkIVH platoon in one turn. The 6pdrs then mostly survived a barrage from 6 Neblewerfers, 2 Tigers & 7 Stugs, but they were at least pinned down and did not repeat their heroics. The Stugs charged on, destroyed the Infantry on the objective and took it on turn 3. 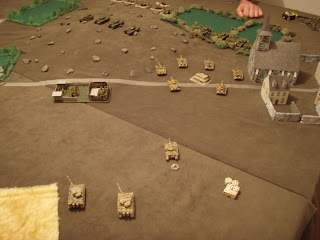 The Scots had no-one in reach to dispute the objective so the Stugs only had to survive a turn to win the battle. 4 17 pdrs dropped out of ambush & 2 platoons of 4 Churchill moved up and let fly. Most of the Stugs died, a couple remained bailed, but the platoon failed morale & it was a quick game over.
Pic 1 shows the Panzers rushing forward.
Pic 2 shows the Stugs on the objective about to be blown back off it.
Posted by Jim Gandy at Thursday, November 13, 2008 No comments: 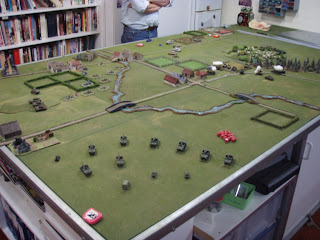 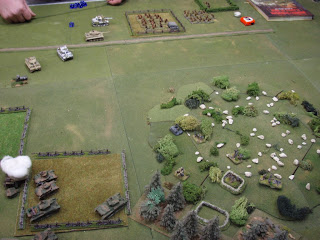 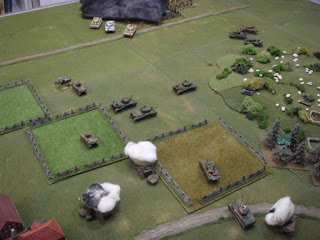 Barrie deployed in the 2 most crowded quarters of the table. Jim chose to deploy in the most open quarter & attack into the cover.
The German deployment had 105s behind the woods on their left, then Grenadiers in the woods, Pak 40s & HMGs out in front. In the other quarter they had Pak 97s near the centre, then Grenadiers & Mortars on ther their right. The dreaded Tigers were in rear centre ready to pounce.
The Brits put their Artillery in the centre, the 2IC's platoon on the left, the heap of tin on the right & both infantry in flank attack.
The Brit over-ran the Paks & HMGs on turn 1. The Tigers moved forward sniping, but at long range across standing corn, rivers or burning tanks it was always 6 to hit. They got the odd hit & they got one Cromwell platoon but the rate of attrition just wasn't fast enough to stop the tide. One platoon of Cromwells doubled to the edge of the wood then over-ran the 105's. The other Tank Platoon plus the Stuarts wore down the Grenadiers - only repeated morale test passes kept them in the game. On the other flank the 2IC platoon worried mortars & Pak 97's into ineffectiveness, then rolled up the Grenadiers - but again good morale throws kept that platoon in the game.
Meanwhile the battle was being decided on the objectives. Both Rifles came on on turn 5, took the rear objective & dived into the fields around it. This forced the Tigers to move over to dispute it. The Sextons then smoked the Tigers while the Honeys grabbed the other objective. 3 Tigers backed out of the smoke to try to blow the Honeys away while the other stayed disputing the objective. They got one Stuart, but the morale dice came up Rats & the Brits held the objective to win the game without killing a single Tiger.
Pic 1: Overview from rear of British start quarter.
Pic 2: The Rifles have taken the rear objective, Cromwell & Stuarts harry the Grenadiers, the Tiger don't know what to shoot.
Pic 3: The Tiger come out of the smoke but can't drive the Stuarts off the centre objective.
Posted by Jim Gandy at Tuesday, November 04, 2008 No comments: 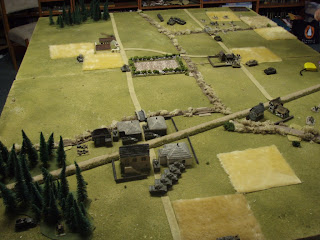 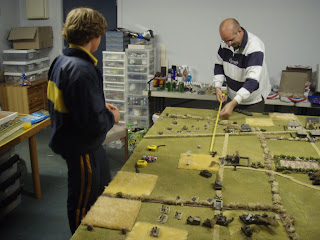 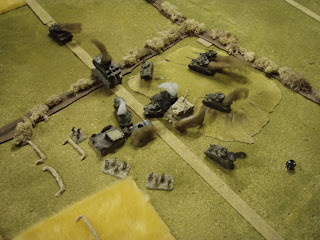 Nick deployed the Super Shermans & Stuarts on his left, TDs in the centre, Shermans, Inf, Recon & Art on his right. ames deployed Infantry & Art on his left, Infantry & HMG on the right & Infantry, Anti/tank, SPAA & Tigers in the centre. James scored the first coup of the night by throwing Tiger Skill of 3 shots. But that was negated pretty quick when the first US barrage got Time on Target & wiped out the Pak 40's.

The inevitable Supersherman + TDs v. Tiger fight started well for the US too with a Tiger brewing up. But then the German sectret weapon stepped up - the SPAA took on the TDs and destroyed them. The Tigers popped a couple of Supershermans & the rest of them ducked for cover behind a hill. The Stuarts tried to rush the objective on the German right while this was going on, but the Grenadiers beat them off.

On the German left the Shermans whitled away at the 105s & the Infantry was sent to the centre in their HTs to defend the objective left exposed by the death of the TDs. The SPAA rushed towards the other objective on the US right forcing the US Infantry in the HTs to turn back to intcercept. Their MG fire bailed up the SPAA, but didn't kill it. One Tiger shot at the HT's needing 6 to hit (long range, concealed, slow traverse) - James threw three 6's. The HT's burned, the GI's lept out, the unpinned SPAA mowed them down & the rest failed morale. Suddenly the battle had turned - the US had nothing to defend their centre against the SPAA & Grenadiers.

The US deperately attacked on both flanks. On their right they made progres - finishing off the 105's, but before they could take the objective from the Grenadiers, the battle was decided elsewhere. The last 2 Super Shermans and the CIC came out from behind the hill & took on the Tigers. Now the US got lucky and they killed both the Tigers on that flank (the other had been left behind to assist the left). But the last Tiger survived Platoon Morale, & firing at 6 to hit popped the HQ Sherman. The US made a last desperate effort to take their left flank objective. They destroyed the HMGs, but Grenadiers beat them off - they failed Platoon Morale forcing a Coy Morale Test that could not be passed.

This battle had more ups & down than the stock exchange. The Tigers dominated the centre & they did their bit, but the SPAA were the unlikely heroes for the Fatherland - taking on the TDs & their Armoured Car escort & beating them.
Pic 1 is early in the battle with US armour skulking out of sight of the Tigers at both ends.
Pic 2 is the classic "how far can that bloody Tiger shoot?" pic
Pic 3 is the pile of bodies on the US RHS objective.

James goes through to a Semi Final v. Mark.
Posted by Jim Gandy at Saturday, November 01, 2008 No comments:

The Germans deployed infantry on each objective, artillery in rear, HMGs, Pak 40's & Tigers in the centre, Infantry right of centre & SPAA on the left. The US deployed Infantry & most of their armour on their right, artillery in left rear, Honeys & Recon on their left.

The US advanced on both flanks. The Germans advanced their 4 Tigers plus the Infantry & HMGs in the centre. The US rushed the Tigers with their TDs & Super Shermans. Before they even fired a shot 2 Tigers died & one was bailed - the Tigers only passed morale because they had thrown For The Fatherland. The remaining Tigers plus the Paks hit back. The TDs died but so did another Tiger.

On the German right, the Honeys wiped out the advancing Infantry and then rushed the objective, but the Infantry defending it threw hot dice and beat them. On the German left, the Shermans rushed the other objective. They destroyed the defending Infantry & took it, but the Paks & Artillery hit back destroying the whole platoon to save the game. The US Infantry came up & also took the objective. The lone Tiger did a Ned Kelly defying the remaining Super Shermans & 2IC tank to go to the objective. It then survived the attack by the bazooka heavy infantry platoon to maintain dispute of the objective until the Paks could finish off the Super Shermans & force Army Morale Failure.

The US got within a whisker of winning several times, but every time the Huns held on. For The Fatherland is not one of the most desired Tiger Ace Skills, but this time it won the game - without it the Tigers would have been gone without firing a shot, and I lost count of the number of times a 2 unbailed or passed a platoon morale test for the last heroic Tiger.

The Brits made a rush round the table edge furthest from the Tigers. The Honeys died on the way, but so did a couple of Paks. Two Infantry platoons exterminated each other in the centre. The Cromwells overran the 105's in their path but lost a platoon doing it. The mob of tin then formed a two abreast columns to squeeze between a DG hill & the table edge. They charged out into the open into the face of the Tigers as the reserve infantry came on.

Cromwells burned everywhere under the Every-Shot-Counts fire of the Tigers, but they kept passing platoon morale keeping the Brits in the game with 2 platoons down to 1 tank. Meanwhile the Germans lost their last Paks to artillery, lost another infantry to the Brit reserve infantry & had to check Coy Morale every turn. On their second try the Germans failed giving the Brits victory. The Germans had lost only 1 of their Tigers - to a Murder from the Sextons.
Posted by Jim Gandy at Saturday, November 01, 2008 No comments: