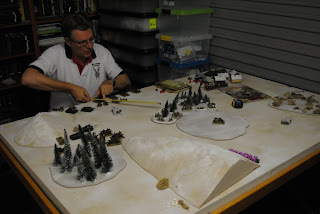 A good night at Nick's garage with 9 gamers present. 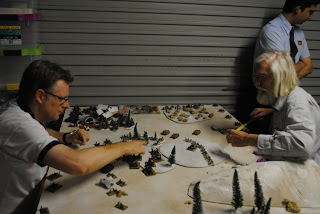 The Germans being infantry defended, putting 2 Sperr Platoons, 2 88's & 4 Pak 40's in the wood containing one objective. The other objective was in a frozen swamp defended only by the covering fire of 2 88's & 2 HMGs. In reserve they had 155's, Hetzers, Stugs & Pioneers.

The Russians had several monster SP guns and a Cossack Coy on the table (all in one corner) with 4 guns, scouts & pioneers in reserve.

At first things went well for the Germans. The Pak's popped 3 monsters & their reserves came on steadily. Then they found out about well handled Cossacks - they swept across the gap to assault the wood and in two turns destroyed a Sperr Platoon, the Paks & the 88's. 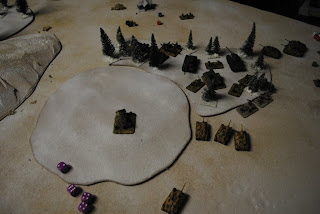 The German reserves came on promptly, but their progress to the front line was painfully slow through the snow, with no doubling, tanks slowed to 20cm with bogging rolls. The Hetzers being overloaded bogged on 2+ & the whole platoon bogged the turn they came on & their subsequent progress was pitifully slow. At least the 155's didn't have to move up and they quickly popped a monster and two guns from the table edge, but they then ran out of targets as the Cossacks had killed the observers and the entire Russian force was behind the wood. 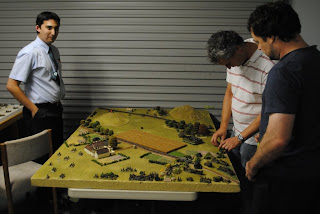 The Russians regrouped, brought up the surviving armour and went for the objective at the other end of the wood. They destroyed the 2nd Sperr Platoon & HQ to take it, but the Pioneers arrived just in time to take it back with fire support from the Stugs. The Pioneers hunkered down on the objective while the Stugs went round the wood on a monster hunt. The Russians refused to be distracted and continued the assault into the wood leaving the 75mm guns to duel with the Stugs (without success). 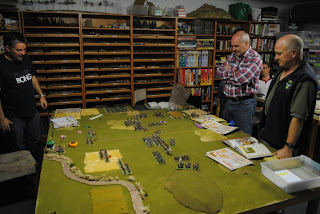 Now it was Germans turn to get lucky. The Russian tanks all got bogged in the woods during the assaults & the Hetzers finally got close enough to help out - their mg fire stopped the Russian infantry's assault on the surviving Pioneers. The Russians were now reduced to 2 guns, 2 Cossacks & a few scouts & conceded. After spending most of the battle bogged in the snow, the Hetzer's ended up arriving at the right place at the right time to win the battle (I could say that it was all planned - skillful use of reserves and all that - but no one would believe me).

The battle ended as a timed out draw with both sides in firm possession of their enemy's objectives but without the means to attack and take their own. The Germans' superior artillery would have won out in the end, but not in the time available.

Apart from noticing how beautiful it all was your reporter was too preoccupied on the eastern front to report much about the battle beyond the fact that Carl & Leigh's Lancastrians won.
Posted by Jim Gandy at Saturday, March 27, 2010 No comments: 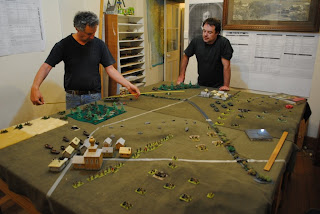 The battlefield was divided in two by a river & both sides put an objective on each side of it.

On the German right a town & ridge divided the forces, Russian Strelk + A/tank guns v. Armoured Panzer Grenadiers & SPAA.  The Germans got into the town first, but the Russians were dug in & the front stalemated. 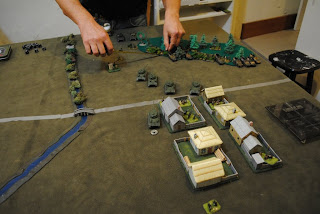 On the German left they stacked a large wood near the enemy objective with Armnoured Panzergrenadiers & Pak 40's with 3 Panthers behind.  The Russians advanced with 5 IS2s and a Strelk.

The Russians also had heavy mortars in the centre & a Gods battery on & behind their RH objective.  The Germans had a double Neblewerfer battery in rear plus more Paks & an 88 in & behind a wwod in the centre.  The artillery did a bit of damage on both sides but nothing very decisive. 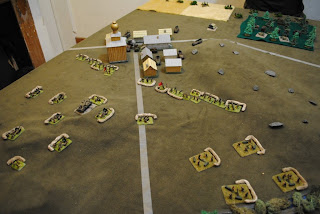 The Russians tried to take the objective on their right.  The Strelk were stopped dead when the half tracks came up to the edge of the wood and hosed them with mg fire - 10 failed 3+ saves in 15 hits did for them.  But the IS2's were harder to stop.  The Panthers did a Marder shuffle at the edge of the wood scoring a bail for the loss of one.  The 88's long range sniping across the river was ineffective.  The Paks in the centre were eitehr too far away or popped by the mortars.  The IS2's took the objective, but it was disputed by 2 panzerschreks.  The IS2's assaulted & killed the panzerschreks, losing a tank doing so & took undisputed possession of the objective again.  The Paks got another IS2, the Panthers bailed one & with the the first one still bailed after 3 turns that was a morale check for the tankovy.  This they failed that too (fearless indeed!).  With that the Russians conceded.

Once again the Russians fail to find victory at Camp Cromwell - even with 5 of the fearsome IS2's.  No hen & chicks for the guard tanks, but they are still slow & the big gun, though powerful, only gets one shot & you can't kill wiley Krauts fast enough. Herr Jendrich is a tough nut to crack, it would be nice to have some dumb Krauts for a change. 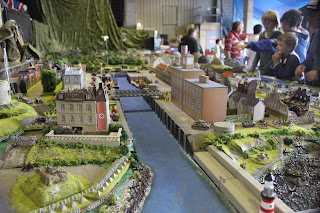 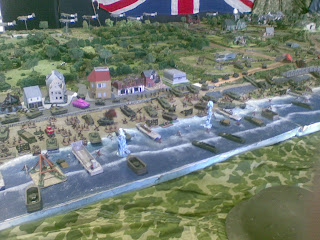 The Kingston guys put on a pretty impressive D-day exhibit at the exhibition.  I didn't have my camera, so I only have a phone pic but gives you an idea - & that's just the centre section.

Adult Ed have accepted my proposal to run a  course in Flames of War.  It will be at the Kingston Adult Ed centre on the four Thursdays in August - four three hour sessions.  The target audience is people who are interested in wargames, but don't know how to get into it, &/or want to try before they buy.   Maybe we'll get some new recruits.

Venue:  Steve's RSL Club is booked out, but other options are being investigated, including St George's Church Hall opposite Camp Cromwell, Adult Ed in North Hobart & St John's Hall in central Hobart.  At least one of them should come good.  If you have any other options please scope them out and report.

Tables:  I have talked to the Kingston guys & they are keen to help out.  Between them & us there should be no difficulty in setting up say 12 tables - which I anticipate as a reasonable objective & limit.

Public Liability Insurance:  The plan is to affiliate Camp Cromwell with the Model Makers & Collectors Association so we can get under their cover.  This requires a $20 one-off fee for the group membership plus $10 per member annual sub.  Membership benefits include discount at McCanns.  I expect that we need at least all the organising committee to sign up to get the PLI cover.

Funding:  I intent to use the Adult Ed tutorial fees to establish a Camp Cromwell slush fund we can use to pay expenses.  These should be recouped from entry fees.  Any suggestions on what we should charge ?  Should be enough to make sure those who register show up, but not so much as to put them off.  (At Launceston they charged $15).

Proposed Period:  I propose Late War (as we had Mid War last time) & 1500 pts. Platoons must be from a published book, not a pdf.  Players must bring the relevant book if not Fortress Europe.

Blue on Blue:  I propose that players who don't like Blue on Blue may bring a second army of the same type (both Infantry, both Mech or both Armoured), but on the opposite side, to use only if they draw a blue on blue.
Eg:  You may nominate a 7th Armoured Coy as your prime army and a Panzer Coy as your second - then you use the 7th armoured unless you get a blue on blue.  If both players have a second option they may either agree or toss for it.
Note that this is optional - players may bring just one army if they wish.
Posted by Jim Gandy at Sunday, March 21, 2010 1 comment: 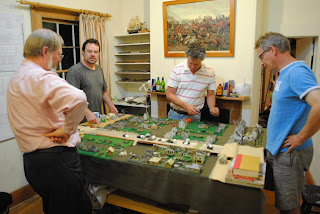 The Germans advanced methodically clearing the way house by house.
The Brits hunkered down and played to hold on until turn 11 when the mission would end. 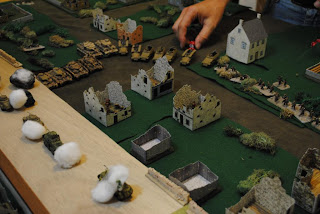 The Germans reached the objective with their Panzers on their turn 10, but the Brits immediately counterattacked.  2 MlII's were bailed on the objective by a 6pdr & a Piat & the Glider Pilot platoon counterattacked.  The 2 remaining operational tanks (MkIV's) could only bring their coax mgs to bear, but 6 shots at 4+ got 5 hits, 4 of which killed and the counterattack stopped dead.   The remaining pilots still disputed the objective, but although they beat off the last turn tank assault, Panzergrenadiers rushed off the bridge to finish them off and gain victory at the last moment. 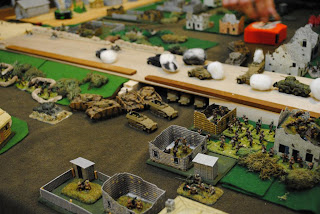 This was  a winner take all finale to the campaign but the Brit's good showing in the first 3 missions meant that the reuslt was just a minor German victory.

The pics are all taken from the Brit side of the battlefield.  The wrecks on the bridge are from previous missions.

The last pic shows the Panzers just reaching the objective defended by the Glider Pilots on teh left.
Posted by Jim Gandy at Tuesday, March 16, 2010 No comments: 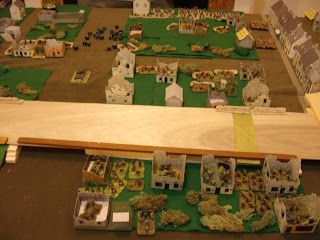 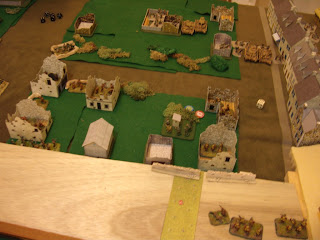 Knaust's force started within assault range of a Brit platoon (pic 1) & overwhealmed it on turn 1.  But the Paras died hard, bneating off the 1st PG platoon with heavy loss and taking out half the 2nd one before being destroyed themselves.

The Panzers advanced cautiously using houses as cover from a 6pdr (see pic 2) until it was taken out by infantry assault.  The Panzers attacked the objective among the houses (the one in the open being covered by 6pdrs moved up under the bridge).  Their first assault was beaten off& although beaten off again, they reduced the paras to 1 team who failed sole survivor.  But the Brits had moved 2 platoons up from  across the bridge & although one was mauled by 105 fire they held the objective.  Brit rifle fire finished off the PGs supporting the Panzers. The Panzers tried again and this time lost badly and failed morale.

The Germans lost the Mission, but from a campaign point of view did ok as they destroyed 2 Brit platoons.

Next week we do the final and deciding Mission.    The Germans have a similar force again, but plus 2 Tigers & an armoured panzergrenadier platoon.  The Brits don't get the 2 destroyed platoons back, but still have a formidable defensive force & the Germasn have to get across the table to the objectives - looks like a good scenario.
Posted by Jim Gandy at Tuesday, March 09, 2010 No comments: 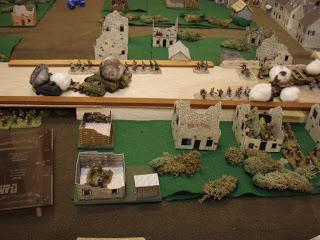 The Germans decided to take a long view and try and kill as many Paras as they could rather than just rush across the bridge.  This turned out to be a flawed option.  They did do a bit of damage to a couple of platoons on the move but not enough to force morale tests.  An assault by Panzer grenadiers down the stairs failed to dislodge the Paras in the houses below & was beaten off.  Meanwhile the force was being attritted away.  The Germans did not suceed in killing any Brit platoons and failed to get any platoons over the bridge.  So the Brits get 6 VPs to add to their 4:3 win last week. 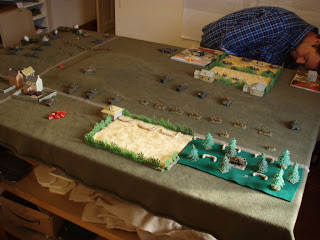 The mission is really about a turkey shoot  it's set up so the Germans are going to get shot up, but can still win the battle due to the VP system.  It would have been more exciting if the Germnas had done that.

On Saturday, Jim's &th Armoured creamed Joe's Spevverband in a 1750pts Encounter.  They then fought a Firestorm long campaign as a boardgame.  Joe'sinexperience counted agianst him & Jim's Soviets won a convincing victory - but it was a good fun game.
Posted by Jim Gandy at Tuesday, March 02, 2010 No comments: