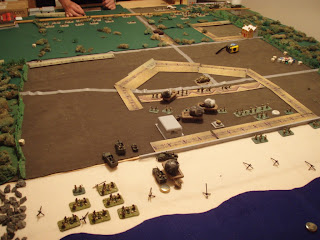 Jim's US Inf v. SteveJ's Grenadiers (Nick helping with rules checks)
It looked bad for the Germans when their entire rear box and half their grunts were wiped out by the Preliminary Bombardment.
But the front line of HMGs & A/T guns survived intact & together with 2 bunkers gave the GIs a hot enough welcome to Europe.
The US made slow progress moving up to attack under a hail of fire as 1 by 1 the Sherman DDs were attritted away, but the front line of bunkers, A/T & HMG eventually fell. Then the Yanks attacked the depleted Grenadiers behind with 3 GI platoons and the last tank plus fire support from HMGs & mortars.
The Grenadiers died hard - they got the tank, destroyed 1 platoon with fire power, beat another off hand to hand, and finally died to the last man - but the surviving GIs failed morale anyway.
There were plenty of Yanks still coming up to secure the front objective, but German reinforcements had come up to defend the rear objective and there was no way the Yanks could take it within the time limit.
The pic shows the Grenadiers still holding the trenchline as reserves come on in rear.
A Minor Axis Victory.
A rattling good game - the Germans get their rocks off killing heaps of Allies, while the Allies don't have to care too much because there's plenty more where they came from. This game looked hopeless for the Germans after the preliminary Bombardment wiped out half of them, but it was the wrong half dead for the US. But the invaders did better than last week - they are moving up the learning curve.
Posted by Jim Gandy at Friday, March 30, 2007 No comments: 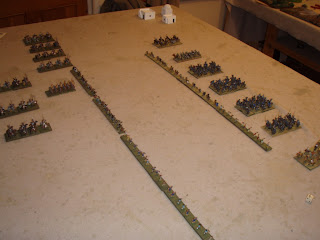 The Byzantines made the usual flank manoeuvre, this time stacking their left.
In the pic the Byzantines are on the left.
The Sassanids tried a pre-emptive strike at the Byzantine centre. This was going ok, but the Byzantine flank attack worked better.
The Sassanid reserve partially stemmed the tide, but there were too many Byzantine units & some got throught to hit the rear of the Sassanid attack before it could break through.
Posted by Jim Gandy at Wednesday, March 28, 2007 No comments: 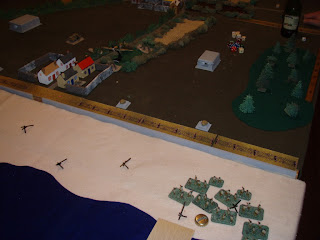 The Yanks soon discovered they were on a steep learning curve and starting at the bottom of it.
They quickly learned a few things, including:
- Germans are damned hard to hit with naval gunfire, airpower or landing craft mounted Priests.
- Getting off the landing craft is a dicey business - the tide takes them all over the place, they often don't get ashore at all - then they get stuck & can't go back for more troops.
- Getting pinned on the beach is very, very nasty.
- Pill boxes are a pain.

The Germans were at first a bit dismayed by the fact that the Yanks just kept on coming (destroyed infantry platoons become reinforcements). But they soon felt better when they realised that they could just as easily kill them all over again.

After 10 turns (of 12 max) the US conceded a Major Defeat as they had no platoons even close to taking an objective. They had managed to get just 3 platoons off the beach. Two had subsequently been destroyed, but one engineer platoon survived well below half strength skulking in a wood to deny the Huns a Stunning Victory.

The pic shows the first wave of US inf hitting the beach in front of 2 tank turret bunkers & a 75mm bunker. The village is infested with Huns too.

Comment: The Hit the Beach scenario was a bit of work the first time with lots of new rules to look up, but it was an interesting challenge & we all enjoyed it. The Kiwis have done another good job & we'll certainly be doing more of this - well worth the effort of making up the Beach & bunkers (which was fun anyway).
Posted by Jim Gandy at Friday, March 23, 2007 No comments:

Battle of Lin CopingLeft Flank to centre: Rodney 2 Divisions of Danish with allied Divisions 1 French & 1 German Chris linking to Byron the Right Flank with 1 French Division.Opposing the Danes were Swedish forces led by Heinz, Scott in the centre & Richard holding the weaker left flank with a Large Brigade.The Terrain and troop types made it difficult for the French to attack up the right, so forces were transfered towards the centre while trying to pin down some of the Swedes. The Swedish 12 pounders were dishing out some damage just left of centre while the real action was on the Danish left flank.Casualties were fairly even on the Danes left due to good artillery die rolls by Rodney. However Heinz captured some guns using skirmishers and beat off 2 columns of Danes near the centre.The battle is only started and there could be a lot more action in a fortnights time when it resumes. This is one of the biggest and most important battles of the Campaign so far.
Posted by Jim Gandy at Monday, March 19, 2007 No comments:

Ben and Nick. Ben was encountered on the Area 52 web site, discussing warmaster. After much indecision, they finally managed to arrange a game of warhammer ancients (Ben didnt have enough figures for Warmaster).

The battle was 2000 points of Romans vs Gauls. The Gauls had 4 large warbands, a warband of fanatics, and some cavalry. The Romans had 7 small maniples of romans and some cavalry and skirmishers.

Ben was experienced in Warhammer, whereas Nick was learning.

The dice decided the game was 4 turns. Given the short timeframe, the barbarians had a very sophisticated strategy -- charge at full tilt. Ben maneuvered carefully with his Romans. However, critical dice rolls were disasters. His cavalry lost to the Gallic cavalry. His skirmishers lost to the Gallic skirmishers. And one maniple was charged by the Gauls and ran away, panicking a good 1/2 of his army. At this point the Roman stubbonness and finesse kicked in. Ben managed to rally the Romans, and using manipular maneuvers, started really destroying the Gauls.

By turn 4 the Gauls had destroyed one maniple frontally, and their cavalry had enveloped both sides of the Romans. But the Romans had effectivly destroyed the Gallic fanatic warband in the center, and were poised to roll up the Gallic line from the hole created.

The end result was a big win to the the Gauls, but one more turn would have seen the Romans even the odds dramatically, as the Gallic center collapsed.

A good game -- lots of fun, and warhammer in 15mm with all distances halved worked out well.
Posted by Nick at Sunday, March 18, 2007 No comments: 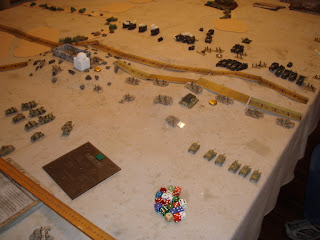 The terrain made it hard for Nick from the start - a wadi restricted his options and limited his attack to a narrow front. The Ities had 2 vicious ambushes - 4 75mm guns & 4 Semo 95s - the 6 gun Priest battery evaporated along with most of the M10s. Nick struggled forward gamely for a while, but with the Itie reserves coming on regularly at 1 a turn it didn't look good. When his leading infantry got pinned on the wire & didn't unpin he quite reasonably conceded the battle.
Posted by Jim Gandy at Thursday, March 15, 2007 1 comment:

The US attacked with the armour on the right and dug in with the GIs on the left.
The Huns dug in left & centre & used 2x priority Henshells to disrupt Nick's attack.
On the Hun right they advanced with a looted KV supported by infantry.

Nick's attack fell apart under a barrage of Henschells, Semoventes, Marders & Pak 40s. Andrew was sent forward to exploit the weakness on the Hun left created by their concentrating on Nick. The 105s got the 88s & HMGs, Infantry swarmed & captured the looted KV then beat the leading Luftwaffe infantry platoon, but it was too little too late. On the other flank, Nick failed morale & there was nothing to stop the Semoventes taking the objective. A win for the Germans.

It was good to have some new players - Greg visiting for WA & Andrew a newbie we met at A52. Greg had some differing interpretations to rules which made us think a bit.
Posted by Jim Gandy at Monday, March 12, 2007 No comments: 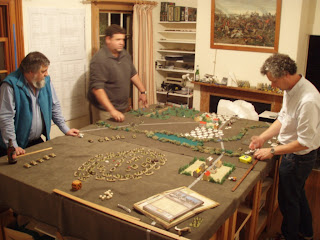 Mark settled down to blast the Russians out of their fox holes while waiting for his MkIV*s to arrive. Jim's Strelkovy kept their heads down & waited for the armour. When the armour arrived a long range tank duel broke out. Greg gave Mark some support from his side of the table with Marders, Semos, 88s & Henshells, but it wasn't enough. The Russians supported their armour with infantry attacks and destroyed both Panzer platoons. The Russians lost an infantry platoon and half their armour. Mark's HQ hang around for a while before failing Coy morale, but the Russians gained victory on that flank by the Germans not having anyone within 40cm of an objective after Turn 6.

Meanwhile on the other flank Steve charged forwards through the woods as the Germans set themselves up for defence - including the pioneers setting up a line of wire. The KVs got bogged often in the woods & on the wire & were pretty ineffective. The Strelkovy made hard work of it on the wire as the Germans counterattacked with Infantry, their looted KV & Semos (brought back from the other flank). Steve's guys just ran out of bodies and failed morale before Jim's remaining Strelkovy could get across to take an objective.

Thus the double battle was a win & a loss for both sides - an overall draw. It was interesting to play someone from WA & see some different ways of doing things.
Posted by Jim Gandy at Friday, March 02, 2007 No comments: