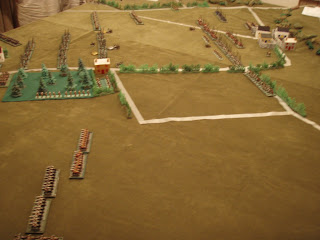 The battle started with an artillery duel that Parliament got the worst of while the King's left moved forward and around the Parliament right.
On their right the King charged with one brigade of horse while holding the Lifeguards back. As the cunning King had hoped, the parliamentary horse beat the forlorn hope, but couldn't stop their pursuit and were destroyed by the Lifeguards & pikement waiting behind.
In the centre, the King advanced to exploit the artillery's success, but the Parliament moved fresh troops forward to meet them.
On the Parliament right, the King's cavalry finally got into position to attack. The Roundheads couldn't stop them and were soon driven from the field.
Parliament had some success in defending the wood in the right centre, but in the centre their counterattack was petering out. When a brigade of the Kings' horse rallied on the table edge and formed up to return, the game was up for parliament.

The revised Camp Cromwell Rules seemed to work pretty well - still a few loose ends to tie up but the principles seem sound. Barrie pointed out that the troops were frustratingly ineffectual at times - but this was a product of the scenario - these were unusual armies in that they had reasonably high morale but had very little training & in the King's case were short of equipment as well. I'm sure Essex felt the same way as Barrie.
Posted by Jim Gandy at Thursday, May 31, 2007 No comments: 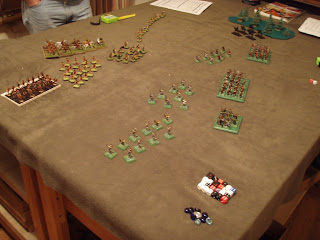 Newcomers David & Craig brought small Warhammer Alexander period armies.
They chased each other around the table for a while but no-one could get a decisive advantage & they agreed to a draw. 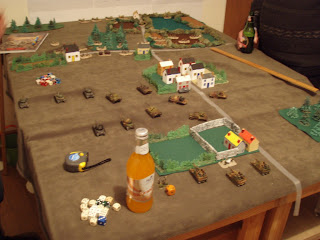 Mark had some good close terrain to defend, though the ground on the German side was fairly open.
The Brits had Churchills & M10's to support 3 grunts, 6pdrs, RA, mortars & HMGs.
The Huns had Panthers, MkIVs, Hummels & SP AA.
The Brit ambush of 6pdrs was singularly ineffective & the 6pdrs died under artillery & tank fire without acheiving anything.
A Panther was lost attacking the forward objective but the defenders were soon destroyed by gun fire.
The Brit armour came up but the Hummels blasted the open topped M10s & the long 75's picked off the Churchills.
The brit Infantry made a brave counterattack on the objective, but there were too many panzers and their cause was now hopeless.
A big win for SteveJ - total losses 1 Panther & 1 SPAA.
Posted by Jim Gandy at Tuesday, May 22, 2007 No comments: 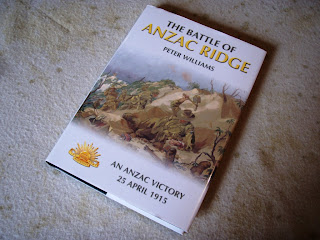 We can now boast that we have a published author in our group. Peter's book looks at the first day of the Anzac landings in minute detail. Being Peter's work it has to have a debunking slant on the popular image of what happened, but he mounts most convincing arguements for his points of view. His wargaming background comes through strongly, he goes into many details that few historians bother with (most of them would have no idea of their significance). I found his descriptions of the action, though very detailed, much easier to follow than most writers can manage. The book is beautifully done in hardback - it smells good, has nice clear print for old eyes, the maps are clear and relevant, the pics and chapter quotes well chosen. Peter's wit pops up regularly and helps make it an enjoyable read. The book is also remarkable in the effort that Peter has taken to look at the campaign from both sides of the wire. I'm not surprised that there has been interest in publishing a Turkish edition. The book is available at Book City in Bathurst St ($42) and Dymocks in Centrepoint ($45). So go and buy a copy & encourage publishers to publish more miliary history by right thinkling authors.
Posted by Jim Gandy at Sunday, May 20, 2007 No comments: 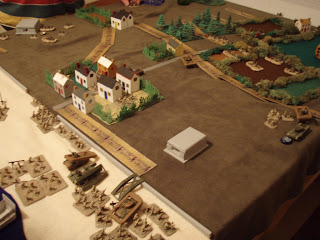 With an 88 bunker dominating the LH end of the beach Steve concentrated his attack at the other end. This produced overcrowding and lots of juicy targets. 2 DDs floundered, 2 got picked off by the Pak 50 bunker at that end of the beach. One AVRE strayed into 88 range & got blasted, but the other bridged the wall & took out the Pak Bunker. Finally the Brits broke through on the right, but the Germans got their reinforcements in good time & were ready for them. The last 2 DDs were taken out by artilllery bombardments & the last AVRE pinned by them. Brit rifles got to the rear objective, clearing the mortars from it, but the Germans had their reserves up to dispute it, clear them off, & make it a minor German victory.
Posted by Jim Gandy at Thursday, May 17, 2007 No comments: 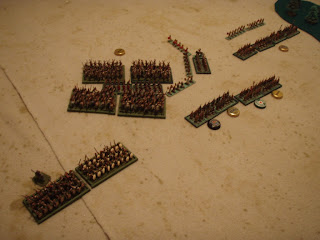 The Romans rested the right of their legion on a wood, extended their cavalry to the left, and put the triari behind the cavalry.
Jendrubal also rested his flank on the wood with cavalry on the other flank. He had cavalry & mercenaries in reserve and a light cavalry unit on his left for an outflanking manoeuvre round the wood.

Both sides made general advances, somewhat discoordinated by bad activation. One triari was sent across to the right to cover that flank, the rest edged right to fill the gap opening between foot & horse.

In the infantry clash, the Nubian spearmen initially pushed back the Romans in the centre, but the Romans held their own against the Spanish & Gauls.

Most of the Roman horse was smashed quicktime. Only the far left flank unit held on - it was only fighting light cav. In the centre the Triari plugged the gap between horse & foot. The Noble cavalry lead by Jendrubal himself found out how tough the Triari are the hard way. They bounced off the first time, then routed when they charged again. But the victorious triari didn't have time to celebrate - they were immediately attacked by the mercenary hoplites & routed themselves. Jendrubal himself managed to dis-attach himself from the rout and returned to command after 1 turn.

Back on the right, the Roman infantry fought back. The Gauls broke in the centre giving a Triari unit a chance to go in on the flank of the Nubians. They broke, soon followed by the Spanish on the far end of the line. An attack by the Medium Cavalry reserve on the infantry that beat the Gauls was held off & when the Carthaginian light cavalry on both flanks routed (by heavy cavalry on one flank & triari on the other) the Carthagians failed the Army Morale Test.

But we had time to spare & were having fun, so we kept going. The victorious Carthaginan right turned to attack the victorious Roman right. The lone Triari unit in the centre kept the Carthaginian horse at bay while the rest reorganised & the Carthagian last gasp attack petered out.

As we had nothing planned beforehand and I haven't re-done the points spreadsheet, when we set up we just checked that each side had about the same no. of combat dice. (No elephants as their rules haven't been reviewed yet). The Romans looked awfully outnumbered with their little maniples, but they are tough little buggers. Probably the Romans had a bit of a points advantage because they had 5 Fearless Vet triari with long spears.
The pic was taken after the battle was technically over. Carthaginian cavalry swamp a couple of maniples, but but are about to be hit in flank themselves. Mercenary Hopites in the foreground & Romans in the background are rallying after wins. The victorious Romans on the far flanks (cav on left & triari on right) are out of the pic.
Comments on new rules:

Last week the combats were too indecisive - we then required 2 fails after all shaken to = rout. So this week rout was 1 Fail after all shaken to = rout. At times units seemed a bit skittish, so we might have gone too far. Maybe the sweet spot is 1 fail too many = one last morale test to save, 2 too many = rout.
The simultaneous movement system works real well. We had some complex situations and they resolved themselves pretty painlessly.
We used units of various sizes this week as Steve's troops were in various sized units & the Romans were in small maniples. The rules dealt with this ok.
I was happy with the diced command system - a bit of luck, but some skill too in having the general in the right place to skew the odds.
Posted by Jim Gandy at Thursday, May 10, 2007 No comments: 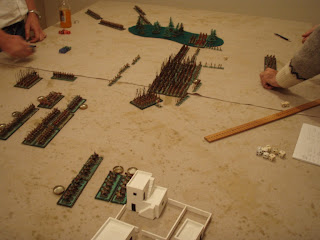 Both sides had the usual deployment of phalanx in the centre, light troops on the flanks.
Nick made a big push forward with his cataphracts on the left of his phalanx. The cataphracts pushed their opponents back consistently without gaining a knockout blow, but their advance exposed the flank of the Seleucid phalanx as planned. Nick's flank attack on the phalanx broke one unit, but some bad luck & Steve's Argaraspids arriving from reserve stopped the rot & the centre bogged down in a rugby scrum.
Nick's cataphracts finally broke though, but they failed to rally promptly and then refused to activate orders to return to the fray.
On the flanks the Seleucids eventually won the fights between the light forces. The Seleucid light cavalry threw exceptional dice to rally and take new orders. Their arrival in the rear of the Pergumene phalanx broke the stalemate. The light cavalry & the Argaraspids rolled up the Pergumene phalanx to clinch victory.

The battle could have gone either way, Nick just missed out on an early chance to win & in the end it was a matter of whose winners came back first - against the odds it was Steve's irregular light horse.

A night away from warhammer so another Floreat Report.

4 takers this week -- Chris Henessy not turning up 2 weeks in a row.

Aggro attacking with his panzers took out the 3 Valentines and a couple of 25 pounders before being destroyed by the 6-pounder portees. Bad dice rolls didn't help the DAK but the German tanks didn't concentrate their attack enough to worry the Aussie lines. Easy win to the Aussies on turn 5 when the DAK failed their company morale.

The DAK defended their left objective with 1 platoon while they attacked on the right flank with 5 Carri, 3 F2's, 2 Panzer III's & Rettemeier. The DAK took out a Sherman and 3 Stuarts very quickly. The return fire destroyed 1 Carri and bailed 1, only with poor British dice. The Germans now had their full firepower and the Carri got into the rear. The rest of the Shermans dead and only 2 Honeys left. The 17 pounders managed to snipe a Panzer III, which strayed out of the cover of the forest. The DAK however finished off the 2nd last Honey while the survivor-failed moral and the British routed.