Nick's Panzers v. Peter's US Infantry in a FFA on Mediteranean terrain. 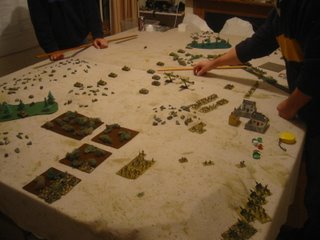 Nick placed his objectives in two open areas - centre and (his) left. Peter placed one objective on his left in woods and the other 120cm away.

Nick charged forward at both objectives, leaving only some Panzer Flamers to cover the objective on his right. The US cause took a nosedive when the GIs on German's LH objective failed to dig in. The MkIIs & HQ hosed them with mgs, then they threw bad saves. The MkIIs took the objective by assault on turn 2. Peter's artillery took out a couple of MkIIIs in the centre, a bazooka got a Mk IV, but the USAF failed to show on turn 2, the MkIIs saved their artillery hits & it was Game Over already.
Posted by Jim Gandy at Monday, October 30, 2006 No comments:

The battle was set up for Cameron the next day. But the kids wanted to play. Not much tactics -- both sides marched foward. The Byzantine cataphracts were about to hit home when the kids got bored and went to watch TV. The game was finished with the armies fighting it out following their given orders. Byzantines were too strong -- with no tactics they went up against the Lombards one-on-one and won! This should not happen -- the Lombards should win in a fair fight, but die in a maneuver battle! There may be a play balance issue!
Posted by Nick at Sunday, October 29, 2006 No comments:

The Luchs advanced on the Hun right and blasted away at a Rifle & the HMGs. The Brits protected the flank with artillery smoke when they had nothing better to shoot at. Nothing decisive happened on the flank - the action was on the German left.

On their right, the Brits advanced under cover of a ridge, a wood & a village. 2 Rifles, the 6pdrs, Churchills & M10s advanced. The 17pdrs & mortars deployed to cover the centre. 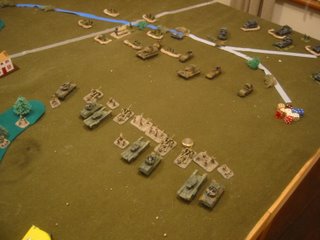 The Germans waited on the other side of the ridge. The Germans did a half track shuffle onto the ridgeline & decimated a rifle platoon. But then Steve made a big error in not noticing how far the M10s had been snuck forward. Suddenly over the ridge came 4 6pdrs, 3 Churchills, 4 M10s & a few infantry. On their left another Rifle platoon stormed out of the village . The M10s were just able to get onto the King's flanks. Hot shooting & bad saves killed one & bailed the other. The Rifles passed tank terror and got the bailed one. Suddenly there were no Uberweapons & the Germans were in Big Trouble.

The Hummels & AA didn't kill enough in retaliation - they got 3 M10s, but next turn were annihilated by a storm of 6pdrs. The Rifles from the village attacked the objective under smoke and killed the defending P/grens. The Germans passed army morale but couldn't contest the objective.

Airpower was interesting. Both sides often didn't throw for them - keeping their dice in reserve. Steve mainly used his as interception - suceeding in stopping most attacks. When he didn't intercept the Hurricanes got shot down by the AA anyway. The most memorable waste of dice was my 6 sixes in 6 dice for air on turn 2. I followed that with a 6 to get 3 planes. Steve then threw a 6 in 4 dice to intercept. What a waste! Later when Air would have been really handy to support the big attack I managed 3 1's in 3 dice for air. The Gods are fickle creatures.

But the lesson of the night was: You just have to be so carefull with your Big Pussies. One mistake can be very, very costly.
Posted by Jim Gandy at Wednesday, October 25, 2006 No comments: 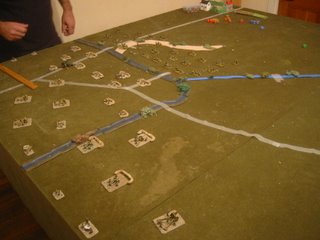 Things looked grim for the Ities as the Red Horde poured forward towards both objectives. On their right the Itie HMGs lived a charmed life. They lost just 1 HMG while continually unpinning & pouring murderous fire into the Ivans. Then a Fucilieri Platoon arrived nicely on the right flank on turn 5 to launch a counter assault and finish them off. On the Itie left, the Guastatori couldn't stop the Horde, but the L6s turned up on the first opportunity just in the right place. 2 L6s were taken out by Sturmos, but 4 was enough to stop the rot. The Ivans melted away under their MGs.

The Pic above shows the Ivans about to assault the Guastatori over the fords. How fortunate were the Ities to have their L6s turn up in that corner next turn?

The Ities were saved by early arrival of their reinforcements - they had them all on the field by turn 6.
But the Gods of War were still there supported by the A/T & A/A on the Russian left and the KVs and Scouts had eventually arrived, so it was far from over.

Both sides now advanced on their right as the artillery pounded away. The Gods of War looked scary, but the Axis had 3 batteries and now had too much fire power for the Russians. The last Russian hope evaporated when the German 105s popped the Command KV & stopped their advance. The Scouts were shot up by the Fucilieri. The AA were hunted down by 75s & rmg fire. The A/tank & GOW were destroyed by the 105s. The Russians failed army morale at the same time as the Fucilieri gained an objective.

An epic struggle that the Russians came soooo close to winning on about turn 4. But the L6s of doom saved the day & then the sheer firepower of the Axis finished the job. The Regio Aeuronautica did well for once - they didn't kill much, but 3 interceptions paid for them. The Sturmos got 2 L6s, but really didn't do enough. The open terrain was a big bonus for the Ities as it favoured the defence & the Axis artillery advantage forced the Russians to attack. One day 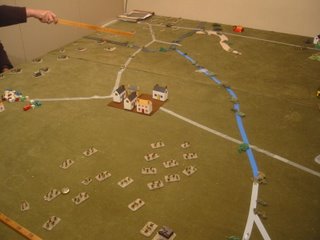 Steve's going to get a bit of luck going his way & someone will be in Big Trouble.

The pic is taken at the end from behind the Russian left. The Umpire is pointing at the Command L6 still bogged in the ford. The 2 KVs on the far table edge, the adjacent Scout team & the HQ by the creek in foreground are all that remain of the Russian army. The Ities haven't lost a platoon (though the Guastatori are down to 1 team).
Posted by Jim Gandy at Saturday, October 21, 2006 No comments: 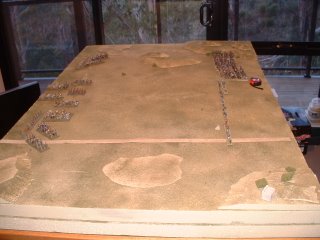 Cameron came up for a quick tactica game. We did early Byzantines (or, as I prefer, Justinian Romans) (Nick) vs Italian Ostrogoths (Cameron).

The Byzantines deployed for a double envelopment -- a hollow center (with a reserve to move to the appropriate flank) and a strike force on each wing. The Goths deployed a hammer of massed cavalry on one flank.

Present: Jim, MarkO, SteveJ, Chris Arthur & James
SteveJ's Panzers v. MarkO's US Inf
2000 pts Trenchfight on Mediteranean Terrain.
The US deployed GIs on the objective, 1 of 2 105 batteries in rear & had Shermans & 57mm A/tank in ambush.
Steve made a methodical approach in two columns. Engineers & tanks on the right where woods covered the advance. Tanks supported by Tiger on the left behind Recon.
The 2nd US artillery was deployed as 1st reserve & the Time On Target began to hurt the Germans (one salvo took out a platoon of 3 tanks). The attack on the German left reached the infantry on the objective but the Sherman ambush & oncoming Honeys & M10s blew them away. Remaining MkIIIs & the Tiger played hide & seek about a wood while sniping away & gradually reduced the US Armour on the flank.
On the other flank the advance drew the A/tank gun ambush, killed 2 of them, pinned the rest then attacked the objective. The GIs were destroyed as was a second platoon sent in from reserve & the Panzers took the objective. But they but couldn't survive the fire of the artillery, surviving a/tank guns & M10. They failed army morale with just the Tiger, Engineers (in an infantry fight in a village covering the right flank) & a bailed MkIII left.
The US didn't have air, the Huns did, but it did nothing - mostly didn't show & when it did, it never hit a thing - maybe the difference between winning & losing.
Posted by Jim Gandy at Sunday, October 15, 2006 No comments: 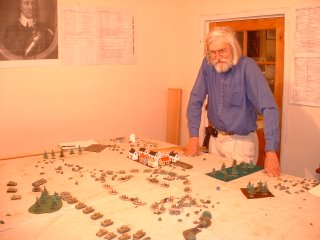 2000 pts Cauldron, Panzers attacking on Mediteranean Terrain.
The Panzers benefited from a good deployment - with all their forces concentrated.
They smothered the anti-tank guns and artillery with fire and lost just 2 tanks before destroying them.
MkIIIs then rushed an objective on a rocky knoll. They drove past the objective, but terrain & bazooka bails stopped them with just 1 GI unit left within 10cm of the objective. The MkIIs finished the GIs off and took the objective.
Newly arrived Shermans killed or bailed all the MkIIs to buy some time as the 75mm TDs & Honeys came up. The TDs whitled away at the Panzers but the Shermans & then the Honeys died as they tried to contest the objective. Finally the Panzers rolled over the GIs on the other objective & won both by morale failure + objective.
While the mass of advancing Panzers looked irresitible, it was still a close battle in the end - the Panzers had lost 2 of 4 platoons with 1 down to 1 tank - so an Army Morale test for them was only 1 hot shot away.
Posted by Jim Gandy at Sunday, October 15, 2006 No comments:

The US so-called Infantry had as many tanks as some Armoured Coys so attacking was not a good looking option for the FJ, but the dice had so decreed.
Mark put one Infantry in reserve and stormed forward on his right with the other two.
The air pretty well neutralised each other with both sides doing well with interceptions.
MarkW's luck was pretty appalling and his attack petered out against dug in infantry supported by Honeys (arriving early from reserve).
The FJ's only real chance of victory was the reserve infantry platoon which came on promptly and grabbed the far objective on turn 3 before the US could get troops onto it. The US rushed Shermans & infantry towards the objective as they bombarded it with air, mortar & artillery fire. The FJs survived the bombardments pretty well, but failed to dig in and then got hit hard by the Shermans' MGs. Lousy saves lead to a morale test & when the platoon failed morale it was Game Over for the FJ.

MarkW is eliminated from Maharajah 2006, MarkO will play the loser of the 2nd Qualifying Final (SteveJ or Chris).
Posted by Jim Gandy at Tuesday, October 10, 2006 No comments: