After a spell of non-war travel with Chris & Irene in New York, Nova Scotia & Newfoundland, I left them in Truro for them to go east to Britain while I started my rail journey to Vancouver & home.  The overnight train dumped me at St Foye 12 km west of Quebec city at 6.15 am.  Following Wolfe's lead I decided to surprise the defenders of Quebec with a flank march walking along the riverside bike track to Fulton Cove where Wolfe landed before dawn on September 13 1759.  There I found a well sign posted walking trail following Wolfe's route up the cliff & across the top to the battlefield, arriving in the city in time for an excellent late breakfast in a sidewalk cafe.

Wolfe gambled all on an amphibious outflanking manoeure at night. Unusually for such adventures, it worked like clockwork.  Maybe a bit of throwing 6's was involved, but Wolfe also made his own luck with meticulous planning.   The track up the cliff from Fulton Cove was lightly defended as Montcalm overestimated the difficulty of scaling the cliff.  It is an imposing bluff, but really not that high. The initial landing party got past the first guard line by pretending to be a French supply convoy with some French speaking soldiers in the lead boats. A party stormed up the track while a party of light infantry scaled the cliff & outflanked the defence.  Wolfe landed about 4,000 men & 2 guns, got them to the top in the dark & deployed them for battle as he reconnoitred the ground.

Montcalm's army was camped some miles away at Beauport east of Quebec.  He got it on the move & was able to deploy between Wolfe & Quebec on the so called plains of Abraham mid morning.  The Plains are now a park.  They are hardy "plains", being rolling ground with patches of woods.

Two lines of about 4,000 men faced each other.  Wolfe didn't try to bring his full force over the river to the action, but his force comprised his best regiments plus the grenadiers of the others.  The French probably couldn't believe that Wolfe could have got as many men as he did up the cliff in the dark as he did & they attacked as soon as they had deployed.  They fired a volley at too long a range & charged.  The British vets gave them one devastating volley at point blank range & counter-charged with the bayonet.  The French army broke & ran for the town.  After a night & half a morning of manoeuvre, that battle was over in minutes.  The only downside for the British was Wolfe's death on the battlefield.

With the British army on the Plains of Abraham in front of the city it was cut off from supply & had no alternative but surrender.

The battle was a very simple affair, but following the pre-battle manoeuvres made a very interesting morning, well worth doing. 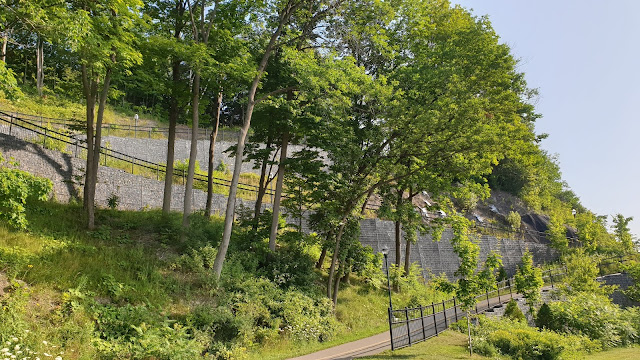 The track up the cliff has been considerably improved - made into bike track. 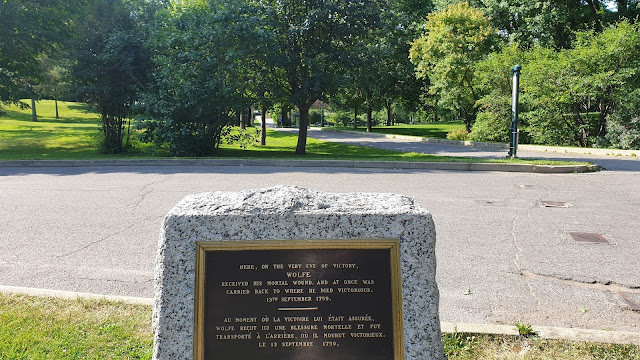 The spot where Wolfe fell. 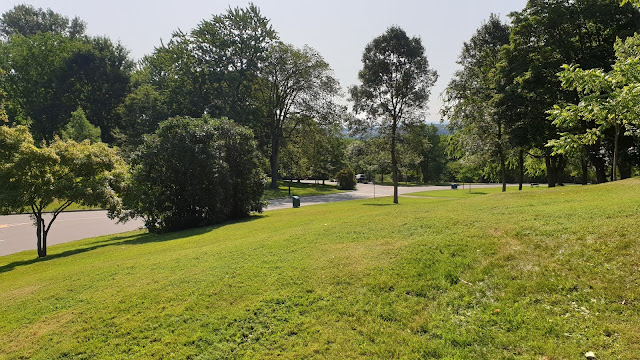 Another view of the "plains".  The pattern of the tree cover probably was probably quite different in 1759.

A little bit of War of Independence

On our way to the naval museums near Norfolk we visited Yorktown.  The British were left cut off in the fortress after the French won a rare naval victory in Chesapeake Bay.  Washington's army was also supported by French infantry, artillery & engineers.  Cornwallis surrendered his army to pretty well hand the Americans victory in the war.  Some of the earthworks remain, but it's hard to tell how much is original or restoration. 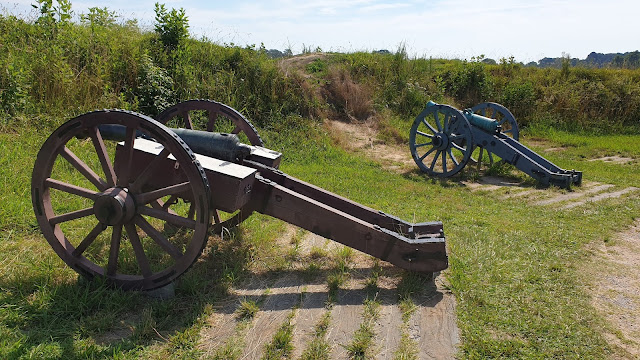 On our way from Washington to Philadelphia to drop off our hire car, we stopped off at Brandywine Creek.  In 1777 Washington's army stood on the banks of the Brandywine covering the fords to block a British advance on Philadelphia. 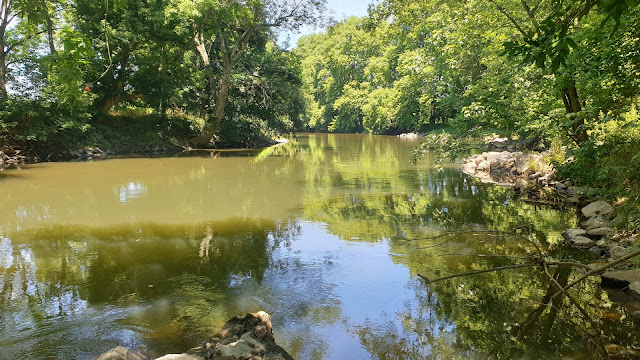 The river is mostly deep & uncrossable, but had frequent fords.  The Brits very sensibly scouted out fords upstream of the American defences, posted their Hessians to threaten the fords in front of the Americans & sent their main force on a 16 mile flank march.  They hit the American flank in the late afternoon.   The Americans tried to deploy to meet it as the Hessians attacked their front, but Washington had been well & truly outsmarted by Howe & they had no hope. 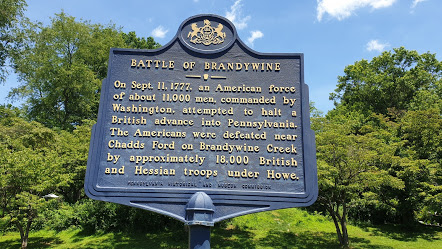 Dusk & the British lack of cavalry saved the Americans from a complete disaster.  The memorial plaque tried to put a good spin on it by exaggerating the British numerical superiority (other sources put the numbers involved at nearly equal).

The battlefield was not a great one to visit.  Being a decisive defeat, it is not a battle the Americans like to make much of.  There was a visitor's centre, but it was closed on Mondays when we were there.   The only part of the battlefield made a park was a small part around Washington's HQ & there were no information panels or leaflets.  For once we had to rely on Googled maps & GPS to find our way around the battlefield.  The main part of the field is covered with subdivisions of McMansions & it is impossible to tell what the original pattern of woods & fields were.  You can only see that it was rolling countryside & that the battle was all about the fords.

So ended our road trip through the battlefields of the US.  In just under 4 weeks, Chris drove us nearly 4,000 miles (6,300 km) on the wrong side of the road without mishap while I became pretty efficient at car sat nav.  We visited over 30 battlefields plus many forts.  Along the way we saw a great cross section of the US countryside, warts & all.  Battlefield to battlefield is a great way to choose a route, we saw everything we intended to see & a whole lot more discovered by serendipity on the way.  We'd both wanted to do this for a long time & enjoyed every day of it.
Posted by Jim Gandy at Tuesday, July 02, 2019 2 comments: