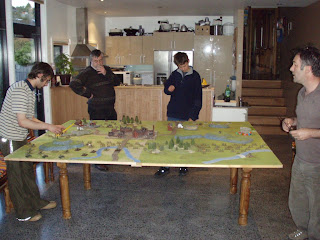 The Russians deployed 2 Strelkovy & the Gods of War leaving KVs, another Strelkovy & some a/tank guns in reserve.
The Huns deployed 1 Gren, HMGs & 2 105 batteries, leaving 2 Gren, 88s, Pak 97/38s & AA in reserve.
Both had airpower (though it acheived bugger all for either side).

The Strelkovy rushed forward as always. On their left the German HMGs & a 105 battery plus a lot bad unpinning dice (the kommisar got shot) stopped the attack. On their right the Grenadiers & HQ were over-run and destroyed, 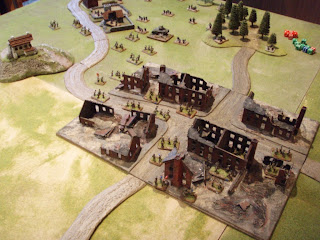 but the Strelkovy were taken below half strength in the Assault. Nick then threw 2 for morale, 1 to get the Kommisar shot & 2 again for the CIC re-roll. So the remaining Strelkovy ran away leaving the objective undefended by anybody (apart from a large pile of bodies).

Both sides reserves were slow to arrive. The 88s & KVs both came on on the German left & took each other on. The KVs got first shot & missed. The 88s got a KV & the other 2 thought better of it & took cover behind a hill. The 3rd Strelkovy advanced in the centre under heavy artillery fire & destroyed the Grenadiers sent to meet it, but 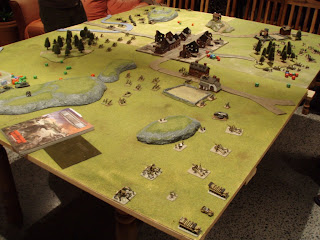 was in poor shape afterwards. The other Strelkovy (on their right) was down to it's last few teams. The KVs were skulking behind a hill. The Gods of War were being whittled away by the 105s. But the Huns didn't constitute much of a threat either - they only had 1 mobile unit left - a shot up Grenadier Platoon.

The game had bogged down into an artillery duel & it was getting late, so a tie was agreed.
Posted by Jim Gandy at Thursday, December 28, 2006 1 comment: 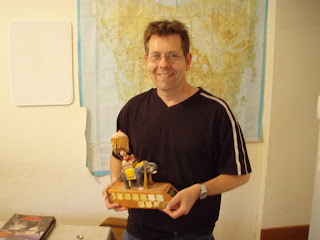 Maharajah 2006 Grand Final
SteveJ's Grenadiers v. Chri's Strelkovy in 2000 pts Free For All in the snow.
Steve's army was his usual 3 Grenadiers, HMGs, Mortars, Lt Guns, 105s, Pak 36s, Hortense(2) & 109s. Chris's had 3 Strelkovy plus Shtraf (all maxed), 10T70s, 4 SU76 & mortars.
A human wave swarmed forward with the tanks (slowed down by the snow) following up. The Germans desperately pumped lead at them but the wave seemed unstoppable. The Shtraf got to an objective and it looked like game over, but they threw a 1 for morale & had lost their Kommisar so they abandoned it giving the Germans a life. Meanwhile on the other flank the Ivans melted away under fire and were beaten off by Grenadier counterattacks. But the Hortenses kept getting bogged & were destroyed by Air attack so the SUs got to the objective the Shtraf had abandoned. The Germans had to force a Morale Test to save the Battle. The Grenadiers charged again - they finished off the last Infantry (yes they destroyed every one of those 4 Infantry Battalions! ) and charged on to take out 2 bogged T10s to force a morale test on them. If the T10s failed the Russians would fail Army Morale as their HQ had been destroyed with the infantry. It all came down to one dice - a 3+ for the Russians to win - and it came up 3! So Chris has won the Mahrajah Trophy for 2006 - the 7th different winner in the 12 years it has been going.
Posted by Jim Gandy at Sunday, December 17, 2006 No comments:

2000 pts FFA in the snow. The Russians initially advanced 3 Strelkovy abreast with KVs, SUs & T34s supporting the centre, but their right got hung up under mortar fire & they hunkered down behind a hill at least foring Steve to keep some troops on his left. The Russians continued the attack on their left & centre. The Germans had bad luck in not getting their right flank dug in which creating a weak spot on their line. The armour had a hard time in the snow, but the wide tracks helped a lot & they eventually made it to the objective and took it. The Grenadier's counterattack failed tank terror giving the Ruskies the battle.
Posted by Jim Gandy at Thursday, December 14, 2006 No comments:

1500 pts HTL, Indians defending on 6x4 table.
The table was half the Tunisia table left over from Nick & Chris' Maharajah - the side with the mountain so the front was rather constricted. This limited the German line sof attack, but on the other hand made it easy for them to cut off Indian lines of fire & observation with smoke. The German advanced a small Platoon over the mountain on their right while 2 large Platoons attacked the objective directly. 105s & mortars provided smoke cover. Marders & Light AA follwed up.
The Indians deployed a Rifle Platoon on & to the right of the front objective. A 2nd Rifle to the left of the objective & up onto the mountain. 25pdrs were in ambush but brought on immediately to bombard the advance.
Covered by smoke, the Grenadiers on the German left got up close and over-ran the Indian Rifles opposing them.
The small Grenadier Platoon on the mountain were smashed by a 25 pdr Murder then finished off by an Indian counterattack. Those Indians then turned on the Grenadiers in the centre & mauled them. The Matildas arrived in time to retake the objective - protected from the Marders by a small hill. The Bugs then took over dealing with the infantry and the Matildas advanced with artillery support to take on the Marders. The 3rd Rifles arrived to finish off the last of the Grenadiers. The Marders had to advance to maintain teams over the centreline and they died under a hail of 2pdr fire from the Matildas. A hard fought win for the Indians.
Posted by Jim Gandy at Tuesday, December 12, 2006 No comments:

The battle started with 2 US Inf platoons dug in on the objectives & 5 Shermans in Immediate Ambush. The Huns had Neblewerfers safe on the mountaintop & 3 MkIIIs & 3 MkIVs hiding behind a hill from the ambush. The Huns got their 3 MkIV*s quick, but the US got their 5 Stuarts as well. Both advanced & it was tank v. tank. The Huns lost 2 MkIIs & 2 MkIVs, but destroyed the US armour completely.
The other 3 MkIIIs came on as did 2 US SP 105s. The Huns threw their 2nd MkIII platoon straight at the objective. They died throwing %$#&ing scorpions at Bazookas.
Very belatedly the Panzer Grenadiers arrived and the master race again charged the cowboys with fire support from the armour. They too died in a hail of scorpions (I've just got to get rid of those dice). With a surfeit of 105 & 37mm shells whistling about their ears, the Huns couldn't hang about and the remaining 2 tank platoons kept attacking. But the Yanks are tough nuts with all that fire support & with a good aggressive defence wore the Panzers down. Finally the MkIII platoon failed morale. The CIC had to join to save them. He failed too, leaving the Huns with just their 3 MkIV*s & Neblewerfers. 4 Platoons + HQ gone, so another US victory.
Posted by Jim Gandy at Friday, December 08, 2006 1 comment:

Chris' army was small but mobile. He put 3 small panzer platoons in reserve. Another small Panzer, 88's & Lorraine Scheppers kept the pressure on the other front.
Nick had Shermans, M10s, 2xA/tank guns, AA, 105s & 2 infantry. He rushed an infantry platoon towards the rear objective but it suffered heavily from air attack & then the early arrival of the reserve panzers. The M10s came out of ambush & moved up to face the reserves. The Shermans were late arriving & then Nick allowed them to be distracted by the Panzers in the centre. The M10s lost their duel with the MkIV*s. The infantry disputing the objective were mown down by the Panzers & the Shermans were too far away. The German flank force held the objective uncontested on turn 6.
Posted by Jim Gandy at Sunday, December 03, 2006 2 comments:

Jim's Bersaliglieri defending v. SteveJ's US Mech in a Breakthrough:

The Tunisian table had 2 rough quarters & 2 fairly open ones. The Ities chose to occupy the rough corners, the US put the objectives in the usual places - near the centre & near the back corner. The Ities had to leave their L6s in reserve, the US had 1 Mech Inf & T30 TDs in flank attack.

The Ities rushed their Guastatori to the rear objective on the backs of the M14s, but they failed to dig in & the US reserves both arrived on turn 4 and came on guns blazing. The Guastatori took 12 hits, then suffered 8 kills from them, included the Platoon commander, the Coy commander & 2IC. That was a big hit on the Itie's best unit. They passed morale once, but failed next turn. The Pak 38s, M14s and L6s (rushed up from reserve) exacted revenge & destroyed the flank attack. But the flank attack served it's part of the evil US plan - the Guastatori & HQ were destroyed & the M14s, L6s & Paks were drawn away from the main action for a critical time.

In the centre, the Shermans spearheaded the main attack supported by the other Mech Inf while 2 batteries of SP guns provided fire support from a safe edge of the table. The terrain channelled the line of attack helping the Itie defence. The 75 battery on the mountain got lots of hits, a good number of penetrations, but just couldn't get firepowers v. the Shermans. The 105s pounded away, but managed only 1 kill before the Shermans attacked the Bersaliglieri in the front line. The Bersaliglieri had 2 opportunites to destroy bailed Shermans, but failed morale both times and were eventually worn down. Meanwhile the US artillery smashed anything that moved and prevented the 2nd Bersaliglieri, the 47mms & the HMGs redeploying from the right flank to the critical zone.

Finally it settled into a slugfest - the 4 Shermans lined up and took on all comers - they couldn't retire without concending the objective, they couldn't advance without exposing their rear & they couldn't spread out becasue of the terrain. With 3 Shermans under the template for several turns you'd think the 105s would do some damage, but no - they got one eventually, but too late to matter. The Pak 38s weren't deployed to best advantage because they were delayed by the need to help out on the other objective, but they couldn't hit anything anyway. The M14s and L6s did the Italian thing & charged through the Shermans & out the other side. They destroyed the 2nd Mech Inf & Coy HQ, but the US still had 3 platoons out an original of 6 - the Shermans + 2 SP Art. The Shermans continued to shed 105 shells like tennis balls & the SPGs were too far away to be got. The US Artillery got the 47s & the Paks, the Shermans finished off the tin cans & it was game over.

The Ities felt very let down by their allies - the 105s & Paks had ample opportunity to kill the Shermans but fluffed it. They are thinking seriously about changing sides. But Steve handled an unfamiliar army well - he had a sound plan & it worked.
Posted by Jim Gandy at Friday, December 01, 2006 No comments: