Bolt Action in the Desert

I had to give my new Italians another run after their drawn battle last week v. Steve.   Tonight Mitch assisted me with the Italians v. Mark's Brits while Steve umpired. 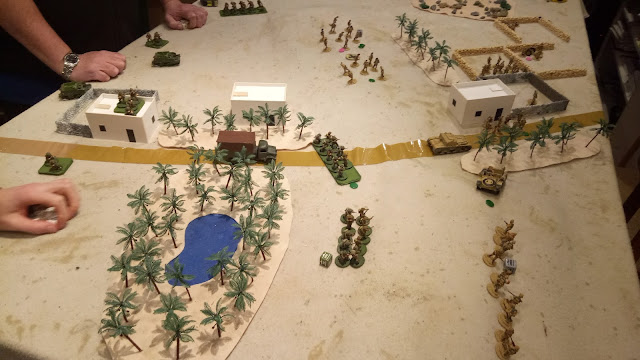 We fought Hold Until Releived, Brits attacking from the left in this pic (& from the far side in the next two).  2 Bersaglieri squads defended the hill at the start.  2 Fucilieri came on behind them.  Another fucieliri s flank.  Another Fucilieri, a Semovente & a Saharana came on this flank & light artillery, mmg & ATR supported on the right.  On the far flank the Brits had a mortar & 25 pdr off shot in cover on a hill & 2 infantry squads.  On this flank they had 2 infantry & an ATR.  In the centre they had 2 bugs, mmg, observer & HQ. 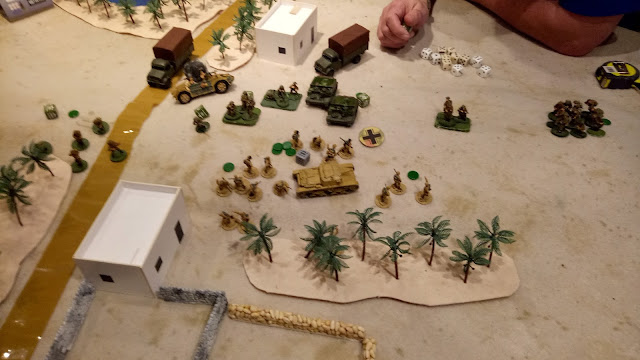 The Bersaglieri on the objective went down and stayed that way for the duration as the Brits threw everything at them.   The Fucileri on the left were destroyed by an assault after the Italian vehicles turned to support the centre & the Saharana was shot up by a bug.  But the Italian right did it's support job - taking out the 25pdr & mortar & when the Fucilieri took out the ATR the Brits were left without any anti-tank - leaving the Semovente king of the field holding the objective along with a few surviving Bersaglieri.   But the Brits also had a few survivors within 3" of the objective, so the battle was a draw - a fair enough result for an entertaining & exciting battle. 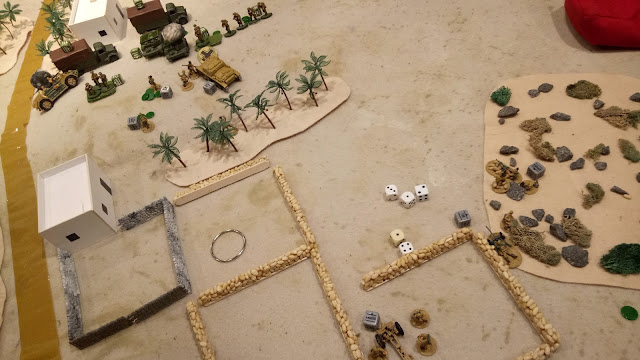 There were 5 Axis & 5 Allied players in this Axis v. Allies event with 1250 pt tank platoons.  Because Tank Wars games are much faster than Infantry games the comp had 4 rounds & there were all done before 4.30. 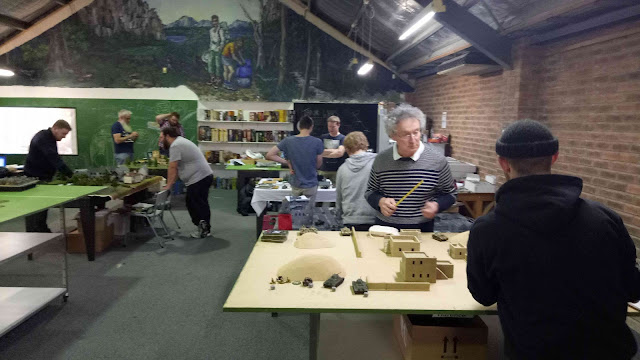 The scenarios were subtle variations on the standard Tank War scenario.  After the 1st round attacker/defender was determined by which side was on top.  As is historically correct, the Germans won the first round then it was all downhill & the Allies won overall.  Points were 15 for a win, 5 for a loss plus 2-5 bonus points for different things in different rounds.  eg: destroying the enemy's most expensive tank, keeping more than half your force alive, totally destroying the enemy, killing 3 vehicles with one weapon.

I won my first two games against US forces comfortably.  Derick did give me a free kick by attacking his own force with his own air twice.   But in game 3 I ran into young Jim's Soviet horde - a formidable list with a general who knew how to use it on table that gave me little cover.  I needed some luck & got none of it.  Game 4 was against a very different Soviet force - with some big tanks.  In this round the scenario was varied by Allies as the leading side being deemed to be short of petrol & the Germans as the losing side, short of ammo.  As our fight progressed the Soviets ran out of petrol while the Germans ran out of ammo - providing an interesting twist which the Germans managed better to pull off a win. 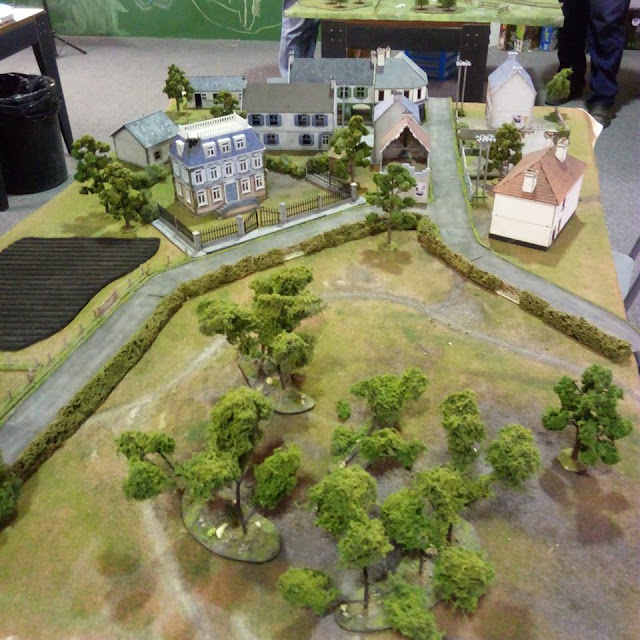 There was a good variety of terrain with several contibutors.  I thought Sean's table was the best (& not just because I won on it).

Bolt Action in the Desert

My shipment of a Italians arrived on Monday afternoon & were ready for action within 24 hours.  Steve gave them their first battle with a British force in a  Surrounded Scenario. 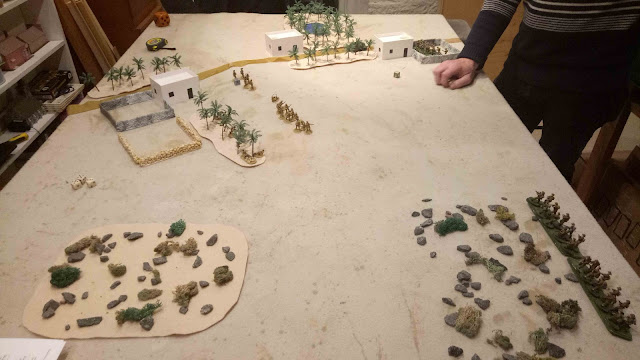 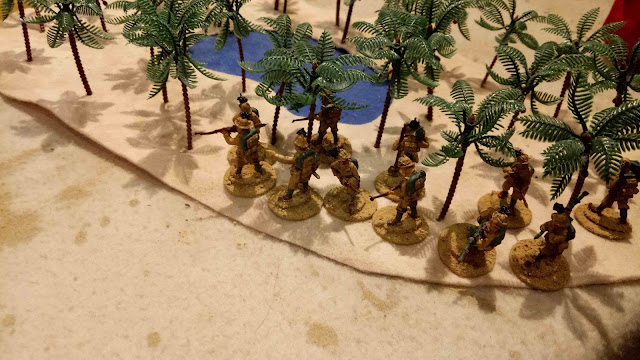 The Bersaglieri looked great in the palm grove, but looked better than they fought & were destoryed by a Brit squad in hand to hand. 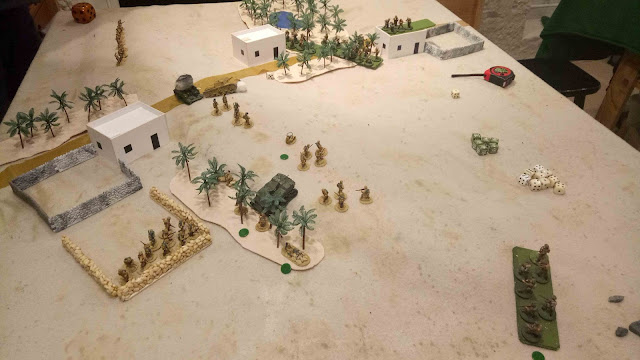 The Battle ended in a draw.  The Brits lost a bug & a 25 pdr to the Semovente, a MMG to mortar fire & an infantry squad to rifle, mmg & mortar fire.  The Ities lost the Semo to the Honey, Sahariana to infantry fire & a Bersgaieri quad to assault.  The Honey was the Brits MVP, taking out the Semo, then only some good Italian luck & a well placed 1st Lt saved the Fucilieri from its assault.
Posted by Jim Gandy at Tuesday, August 22, 2017 No comments:

We had two games going: Matt's German infantry v. Darren's US and Sean's US armour v. Jim's panzers.  The Germans won both. 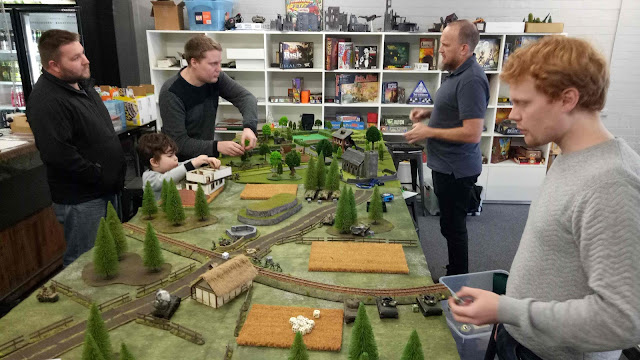 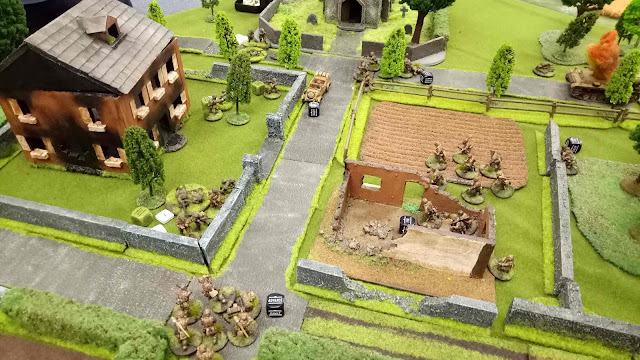 Steve's US v. Jim's Panzers
We added an extra 750 pts to 1250 Tank War lists lists we were considering for the upcoming comp to fight a battle on a 10'x6' table with rolling farmland terrain.   We used the standard Tank War Scenario with 5 objectives on a 5-die pattern. 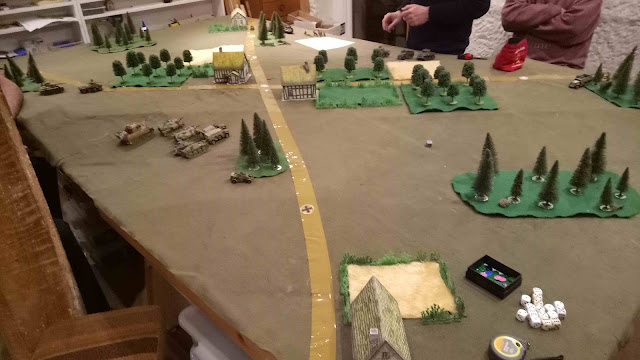 The action was all about the central objective with no effort by either side to contest any of the other 4 objectives.  The US had airpower - a rarity for us.  It may be an experiment unlikely to be repeated as the first airstrike attacked their own side & was sent packing by friendly fire, & the second airstrike never came at all.  The US had early success, popping the Panther with their first shot at it & their jumbo Shermans' armour keeping off the Panzer's fire.   But the farm yards & orchards gave the panzergrenadiers cover to get up close & one jumbo was brewed by a faust & another by a schreck and quite suddenly the tide turned.  By the end of turn 6 the US were out of armour & when another big pussy arrived on the battlefield the US conceded. 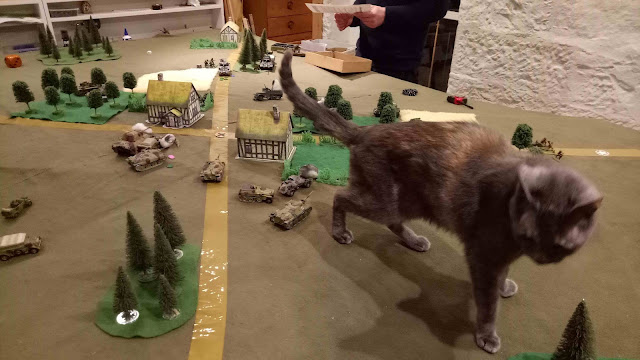 Large BA games can have problems.  Too many units can make the game drag a bit & a larger table can upset the balance in some scenarios or make it difficult to get a result.  It is not so much of a problem with Tank Wars.  Our 2000 pts armies only had no more than 15 dice & some of those were transports of little consequence plus tank combats are usually more quickly resolved so the game zipped along.  The large table certainly enhances the Tank War version of the game.
Posted by Jim Gandy at Wednesday, August 16, 2017 No comments:

Steve's US v. Jim's Panzers
Steve tried out his US option for Tank Wars.  There were 3 objectives - one at the road junction & one 6" from the table edges on the diagonal road.  The Germans grabbed the centre objective with infantry & some survived to the end to keep it.  On the left a US M10 & armoured car took out the MkII & Panzerwerfer to take that objective off the Germans.  On the right 3 Hetzers destroyed 3 Shermans & an anti-tank gun & had one Hetzer left to take that objective to win 2 objectives to 1. 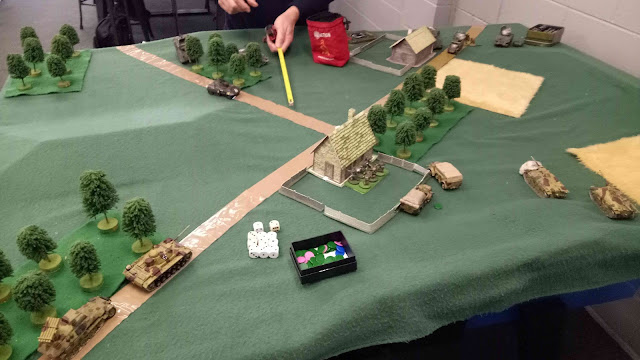 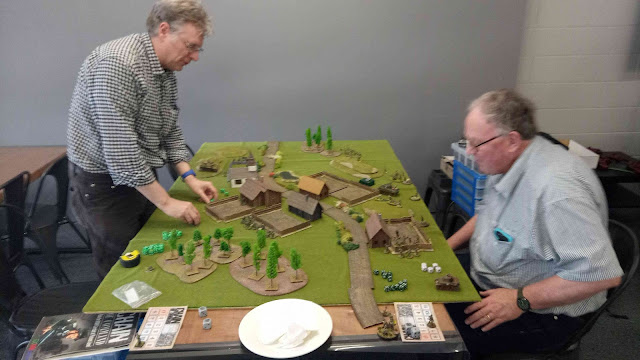 Continuing our holiday from Hail Whoever by digging out another game we haven't played for some years: Dreadnoughts- our house rules for sea battles ca 1905-1942.  Tonight we fought Dogger Bank 1916. 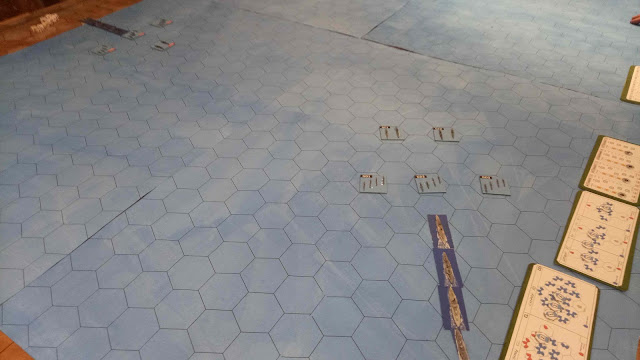 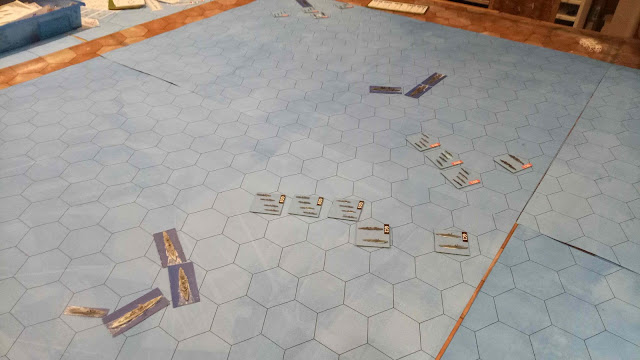 The second British squadron has come on in the far corner.  The German squadron has turned back to take the Brits on.  The light ships are skirmishing between the big boys. 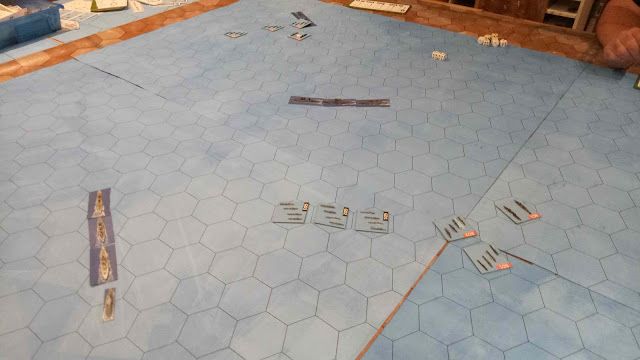 The 4 German capital ships try to take on 3 British ships while the other Brits are still coming up. 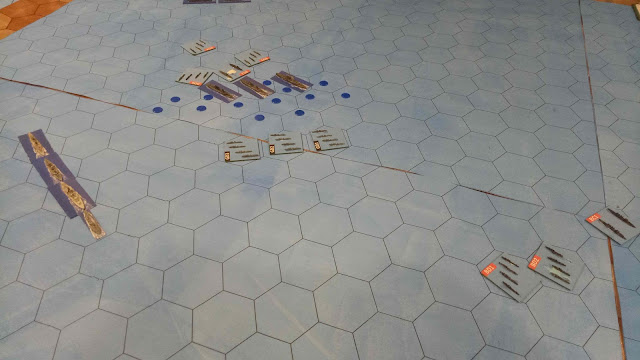 The German DD's sip around the British screen & fire torpedoes (the blue counters are a mix of torpedoes & decoys).  The British Battlecruisers turn away & the only loss to the torps is a light cruiser.   The neat German line is firing to good effect on the now disorganaised British.  The Tiger is  reduced to half speed & the Princess Royal has to turn away badly damaged in the main caused by the old Blucher, left unmolested at the back of the fleet as the Brits concentrate on the 3 more dangerous ships 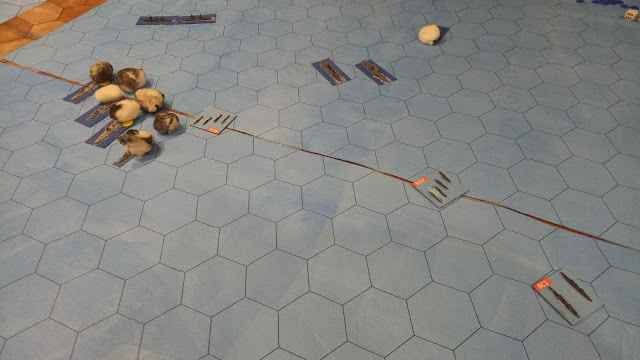 But the Germans success was short lived.  The 2nd British squadron arrived in time to save the 1st squadron & in one turn of bad German shooting v. good British shooting turned the battle around.  The New Zealand caused critical damage on the Moltke & the Lion did likewise to the Derflinger.   The Germans were fortunate to have no speed damage, turned away laying smoke & were able to escape with no capital ships lost.

The Brits also lost no capital ships, but also had 2 severely damaged. Both sides lost a lot of DDs & CLs.  Victory will depend on whether you read the German or the British newspapers.


Steve's Panzers v. Jim's Tankovy
I tried out a Tankovy list I might use in the upcoming Tank Wars comp if there are too many Germans against Steve's Panzers. 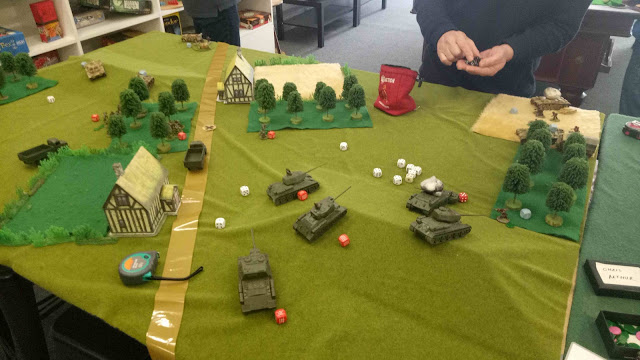 The dice decreed only 1 objective in this Tank War scenario so we put it right in the centre.  The Soviets rushed their infantry forward & grabbed the objective on turn 1.  They placed their armour on the right intending to overwhelm the German left, then move up in support of the infantry on the objective.  The plan unravelled when Steve snuck a Panzershreck through the woods on the Soviet right flank.  The Scheker proceeded to dodge the mg fire of the inexperienced soviet tankies as he moved through their formation leaving a trail of burning tanks. 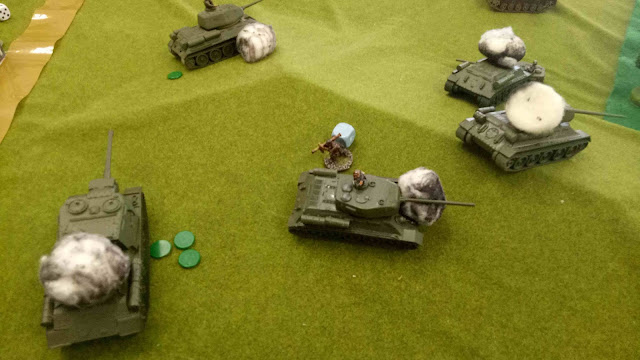 The schreker lost his loader, but carried on to single handed pop 3T34's & an ISU-122.   With the pressure taken off them by the heroic schrecker, the MkIII's had a free hand to mow down the Soviet infantry around the objective & take it to win the game in turn 6.  So the Soviet tanks were hopeless without infantry support while the Soviet infantry were hopeless without tank support ???  Have I discovered the Achilles heel of inexperienced troops, or was Steve just lucky?
Posted by Jim Gandy at Sunday, August 06, 2017 2 comments:

After over a year's break we dusted off the men o' war for some Napoleonic Naval action using our house rules. 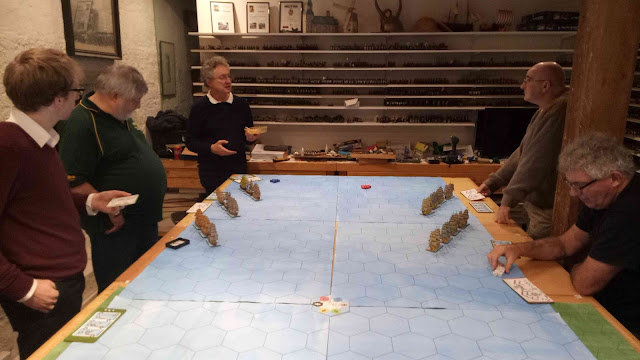 Three French squadrons of 3 ships each v. 2 British squadrons of 4 ships each.  The wind is blowing down the table away from the camera so both fleets are close hauled on opposite tacks. 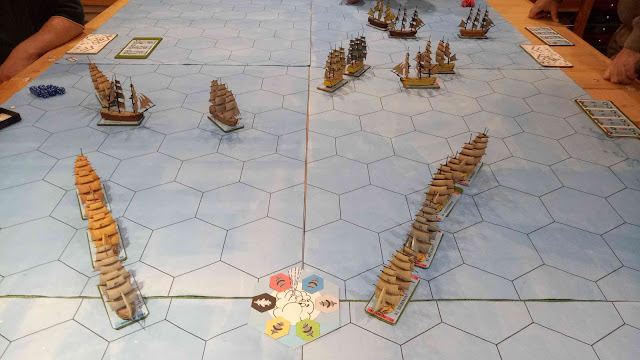 The two lead squadrons maintain their courses & slowly close.  Steve has sailed the rear French squadron across the tail of the British fleet.  Nick has turned the rear British squadron to engage them. 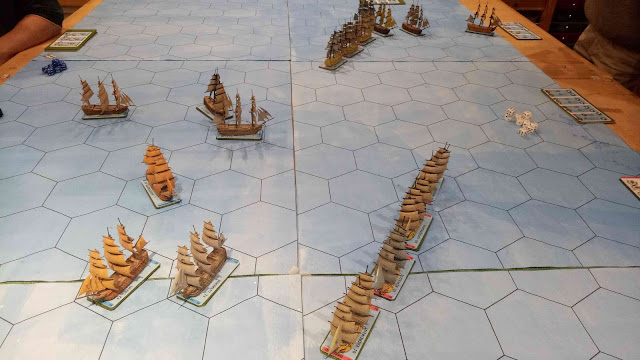 The battle has split into two separate actions.  In the foreground Mike's neat line of 4 ships is engaging a rabble of 6 French ships.  In the background Nick is going straight for Steve's squadron. 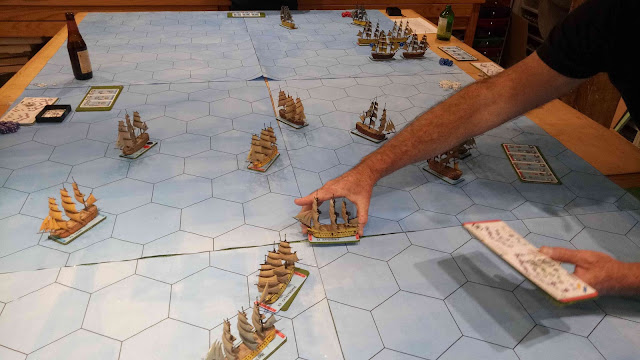 The battle of the rearguards was a brutal affair with 2 French & 3 British ships breaking off with critical damage before Nick's last ship grappled & boarded the last French ship and took it. 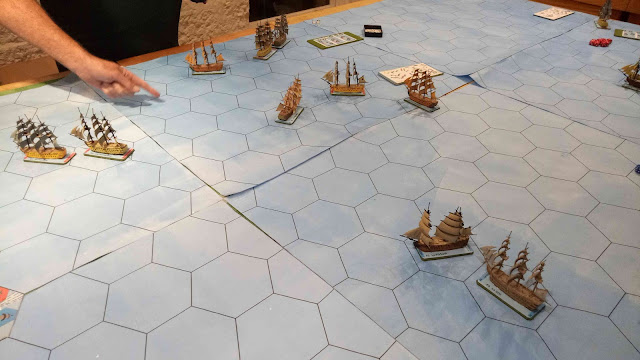 The battle at the front of the fleets became a confused affair with both sides having a ship forced to strike its colours, but the better seamanship of the British allowed them to hold their own despite the odds of 6 to 4 against them.  The French managed to regain their struck ship & the fleets broke off with most ships badly damaged & both sides with a prize.  A count of VPs gave the British a marginal victory.
Posted by Jim Gandy at Wednesday, August 02, 2017 2 comments: