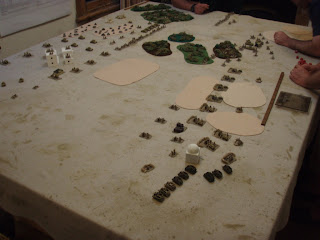 The Ities put Bersaglieri in the scrub on their left, another Bersaglieri to the right of it with Semos & mortars behind. then M14s & artillery in the centre (75s in front, 100s behind).  The L6s were on their right.

The Ozzies advanced on their right - 1 rifle + HMGs & Matildas behind the hill & another rifle thru the scrub.   The 3rd rifles dug in on the objective.  The artillery went tank hunting & the bugs began moving to the right.

The Ities advanced their centre Bersaliglieri into the scrub & moved the Semos & M14s to their left behind the ridge. 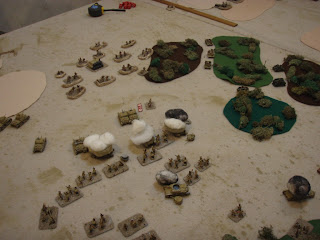 The Matildas advanced over the hill to take on the Ities armour.  With the help of the artillery they got a couple of M14s, but were then swamped & bailed.  They were temporarily saved when the Bersaliglieri failed tank terror to assault & finish them off, but the semos got them next turn anyway.  The Rifles & Bersaglieri in the scrub then mutually destroyed each other while the Itie armour cleared the infantry off the ridge & the other Bersaliglieri advanced in support.

But the battle was won on the other flank when 2 M14s, 5 Semos & the Bersaglieri made a combined assault on the rifles on the objective.  When Joe threw 3 1's with sticky bombs in the counterattack on the M14s it all fell apart for the Ozzies.  The Bersaliglieri took over the assault & finished them off.  The second pic shows the Ities massing for the attack on the objective.

It was a much better battle than Tuesday's.  We all had our moments of good & bad luck/moves.  The big Bersaliglieri battalions from the new NA book are fun beasts.
Posted by Jim Gandy at Thursday, January 28, 2010 No comments: 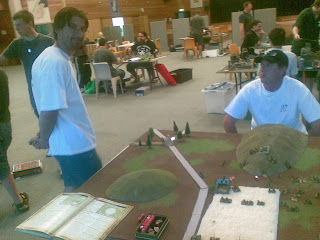 A crowded club meet, with board games, 40K, warhammer fantasy, etc. Two historical games -- both FOW. Nick B vs Nick R -- SS Panzers vs US paratroops. The Panzers lived in fear of the paratroops bazookas. Eventually they managed to pin the paratroops and went in to assault. They won, but not by enough to push the paratroops of the objective. We called time, but the Panzers were on a downward spiral.

There was another game with Starn and Aggro. Starn won when Aggro failed to dig in on the objective when playing a breakthrough, and Starn's T-34 horde with tankodesantniki came on machine gunned him in to oblivion.

The were rumors of playing napoleonics -- something may happen soon!
Posted by Nick at Thursday, January 28, 2010 No comments: 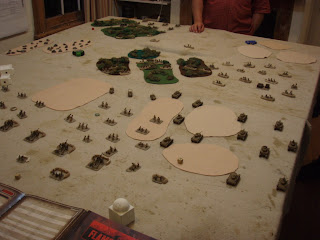 The Axis rushed the forward objective with their armour.  The Australians dropped the 2pdrs behind the objective & rifles on its flank, but they just didn't have enough firepower on the spot to stop the panzers.  The panzers drove the infantry off the objective wiht their turn 3 attack, though with high losses.  The surviving rifles failed to unpin to recontest.  The artillery & 2pdrs failed to hit the panzers to force anotehr morale test, the oz reserves were too late to help, so it was all over at the start of the Axis turn 4.

The game was lost on deployment - the Australians just did not defend the forward objective well enough.
Posted by Jim Gandy at Tuesday, January 26, 2010 No comments:

Updated files:
The box.net files of the Camp Cromwell Rules (downloadable from the sidebar on the right) have been updated.  The update includes the lastest revisions, making the format more consistent, plus the files have been combined into single pdfs for each set.  Superseded files have been removed.

Marathon to Marne:
Play testing has been continuing, resulting in some tweeks.  These are mostly to the Spear & Sword era & as thats' what we have been playing.  The changes are listed after the cover sheet.  More playtesting & refinement in later periods is on the agenda for this year.

Men o'War:
We recently got these out of mothballs.  Although we enjoyed the game & the rules worked fine, after a long break some new ideas popped up.  A couple of tweeks have been made, as well as making the formating consistent with the other sets.

Dreadnoughts:
We have also played these again after a long break.  We found no reason to change them other than to update the format.

Modder Fokkers:
Minor changes to format such as adding a contents table.
Posted by Jim Gandy at Saturday, January 23, 2010 No comments:

We started with the 4 squadrons scattered deployed using a 2 dice coordinate system.  This put Renfrey between the 2 Allied squadrons at the windward end of the table with Jim's squadron way downwind of them.

Renfrey charged at the French & hit them pretty hard before the Spanish came up and put him under pressure.  Renfrey pulled off, one ship dropping downwind to join Jim's squadron still beating up the table & the other beating off the windward. 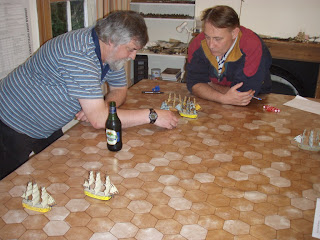 When Jim's squadron finally came up it charged into the Allied fleet while Renfrey's damaged ships sniped from a safe distance.   The Allies copped a lot more damage, but so did the smaller British ships.  With the Elephant minus her foremast & thus unable to go to windward, the Brits consider honour satisfed and were content to slip away.

The pic is early in the action - Mark & Renfrey hard at it with Jim's fleet left foreground & Rich's on the right.  Wind from the far right corner.

It's beena  while since we used these rules - they are dated 2003 - I don't know why because they provide a fun battle - we all had a good time even if it was indecisive.
Posted by Jim Gandy at Thursday, January 21, 2010 No comments: 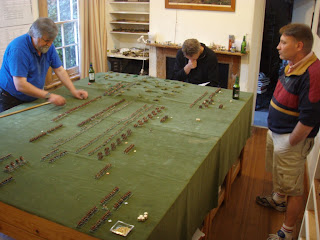 The Carthaginians got first turn & with good activation dice advanced on the whole front.
The Romans also advanced in the centre, but they held their cavalry back on their left & began to move some of Nero's force from the right - infantry to the centre & cavalry across to the left. 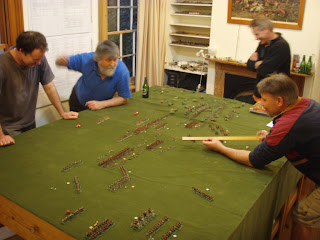 In the centre the Carthaginians put their Ligurians in front holding the Spanish in reserve.  On their left they advanced their (pretty second rate) Gauls slowly through the scrubby hills.  On their right the elephants lead to charge on the Roman horse supported by heavy cavalry while light cavalry sceened off the Auxilia peltasts.  The citizen spearmen were advanced between the cavalry & the Ligurians.

On the Roman left the Auxilia drove off the light cavalry, but were in turn taken out by Gallic horse.  The elephants & heavy cavalry made hard work of the Roman front line heavy cav.  Nero's cavalry arrived too late to save the front line, but in time to save the second line.  So the flank was pretty well a draw.

The Legions smashed through the centre of the Ligurians & then charged on to punch a hole in the Spanish line behind.  But things did not go so well on the flanks.  The Citizen spearmen beat the legion on the LH end & the triari was required to finish off the LH end of the Ligurians.  The Ligurians on the right actually won & with Gauls lapping around the flank Nero's legion was hard pressed.  Nero's triari plugged the gap in the centre, but when it was beaten by Spanish infantry the Roman's failed morale.

In the real thing, the arrival of part of Nero's force on the Roman left flank was decisive - turning the battle in Rome's favour.  Ours was a close run thing too, but our Nero couildn't quite do enough.  But it was a close run thing, the Carthaginians had a hole in their centre & were close to a morale test also.  A good game - we all enjoyed it.
Posted by Jim Gandy at Tuesday, January 19, 2010 No comments:

The Launceston Gaming Club ran a very successful FOW competition over the weekend. There were 14 entrants, including 4 from Camp Cromwell (counting Nick, though the LWC also claim him) & 2 from the Kingston FOW group. The comp was run on the standard FOW system with 5 swiss roster rounds (3 on Saturday & 2 on Sunday). Missions fought were Encounter (2x), Breakthrough (2x) & HTL. All three groups contributed terrain pieces to make up the 7 tables. Armies were 1500 pts from Afrika or Ostfront. There were British, Russian, US & German & Italian coys represented. Blue on Blue was mostly avoided, but the swiss roster made some inevitable.

Nick (US Rifles) won best general after beating John from Kingston (also US Rifles) into 2nd place in the last round.

The Launceston Gaming Club (Doug Colbeck in particular) did a great job organising & running the tournament. All involved had a great time. It is now up to us Hobart blokes to return the favour - plans are afoot for a return tournament in Hobart next Oct or Nov. 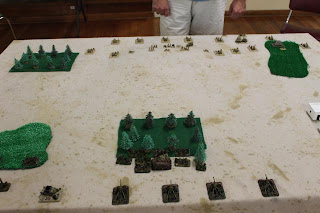 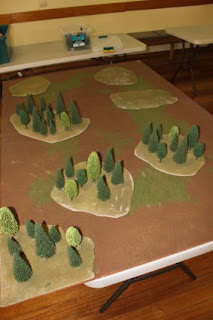 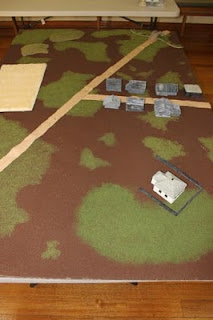 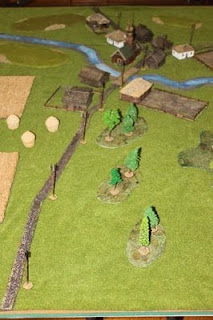 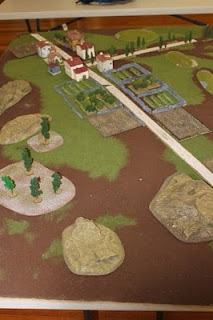 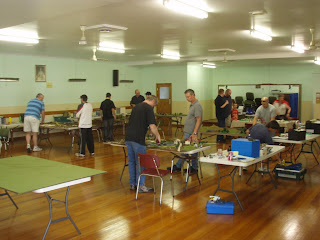 Nick vs Chris is a FOW tournament practice match. 1500 pts breakthrough. Nick was US infantry, Chris was German Fallschirmjager. Nick defending. A close match -- Nick's infantry was pinned and couldnt get to the objective to defend it in time. Chris got a fallschirmajager platoon onto the objective. But Nick kept the objective contested with a tank or two, and Chris kept failing his tank terror tests to assault the aforesaid tank. Meanwhile Nick was slowly grinding Chris down with his artillery, aircraft, and Stuart tanks, until eventually the Fallschirmjagers morale broke.
Posted by Nick at Thursday, January 14, 2010 No comments: