On the German left, Steve's Panzers slowly destroyed the Oz a/tank guns then resumed their advance. The Oz infantry took out the armoured cars but 3 MkIIIs made it up the scarp and backed up by 2 infantry platoons destroyed the Bugs and had an open road to the Oz rear.

On the other flank, Barrie had given up in the centre and redirected his attack up the scarp on his far right. His MkIIIs & IIS had some losses, but made it up the scarp. With mortar support they picked off the artillery leaving the infantry pretty well defensless against the armour.

I'll be at Fort Floriet on Tuesday.
Thursday as usual at Camp Cromwell. I'm going to break the big table up so we'll have 4 6x4 tables for pre-tournament practice.
Posted by Nick at Thursday, July 28, 2005 No comments: 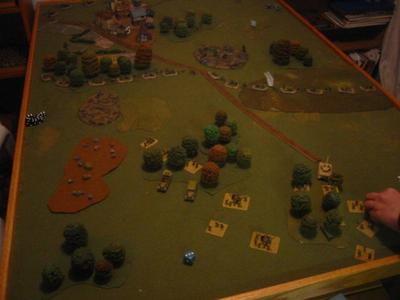 Supported by infantry James' Tigers inexoribly advanced on an objective mowing down all in their path (including the Shermans). Trouble was that the %$#@&*^ Honeys overan the other objective first (again). Dillan has his Dad's luck. The Luftwaffe only came once & then only managed 2 bails on the Honeys (which promptly unbailed) and the Pak 38 that didn't get 105'd missed completely in defensive fire when assaulted by the Honeys.

While that was going on with Jim & Glen supervising, Peter & Mark set up an historical scenario for next Thursday.

The Yanks deployed a cordon of Bazooka & mg toting GI’s across the table with Shermans & recon in reserve (immediately moving to cover the objectives). The Honeys had to be off table at the start.

The Germans attacked on their right with the Tiger supported by infantry, Pak38s & 88s - see pic. Two Pioneer plats were deployed to make a flank attack, but their attack was uncoordinated and was promptly destroyed by the Shermans. The Tiger disposed of the US front line defence then camped behind a wood just within 40cm of an objective while the Germans waited for the Heinies to do their stuff. This they did – wiping out the Shermans before they could organise an attack on the Tiger. The US responded in the usual fashion – a Honey attack. The Honeys dashed past the Tiger and ran amok in the German rear while the Tiger resumed it’s advance on the objectives, now defended only by GIs with a few Bazookas (the right flank inf platoon had been pulled back to defend them). The Tiger got on the objective, but the GIs held on around it until the Honeys did their stuff, finishing off the HQ, Pak38 & 88 platoons to cause German army morale failure before the Tiger could win the game.

It was a hard fought & bloody affair - at the end the Germans had just 1 infantry team and the Tiger left, while the US had lost 3 platoons of 6. The artillery v. air contrast was interesting. The 105's spend a lot of time failing to range in & didn't hit much, but their pinning of the Tiger's infantry support & picking off a Pak38 & an 88 were important contributions in the end. The Henies came often, usually doing little, but the odd attack was devastating (like destroying 3 Shermans in a turn). They attacked their own side once, but were waved off.

Er Regima: An early desert war battle where Australians newly arrived in the desert are holding a ridge against a DAK attack.

Australians: Peter & Jim
DAK: Steve MkI & Barrie
The DAK have made some progress but the OZ line is still holding.
Battle adjourned to be continued next week.

Steve attacked on his left with T34s & inf. The Oz inf and 6pdrs stopped the T34s then cleaned up the infantry. Mark attacked with Valentines & Crusaders on his left. They were stopped by SU76s and infantry. Now the two defensive flanks went over to the attack. The Russian SMG platoon died before they got to their objective. A below half strength Oz inf plat got to their objective and then survived two air attacks & an artillery bombardment to hold it, though the Russians failed army morale anyway.
Posted by Nick at Friday, July 22, 2005 1 comment: 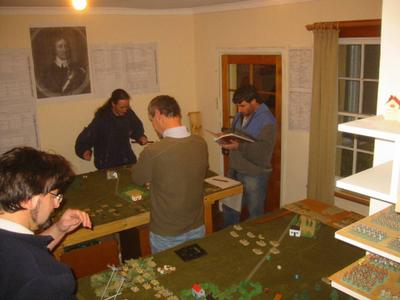 Mark attacked like a beginner, got his tanks picked off by the experienced DAK & failed morale.

Mark had one of his make-up-for-his-usual-hot-dice nights.

The USAF came all the time. The Regio Aeronautica seldom came & when it did it was shooed off.

His reinforcements mostly didn't show up & the Honeys overan the objective.

A big win puts Peter on top of the Allied table with 2 wins.
Posted by Nick at Thursday, July 14, 2005 No comments: 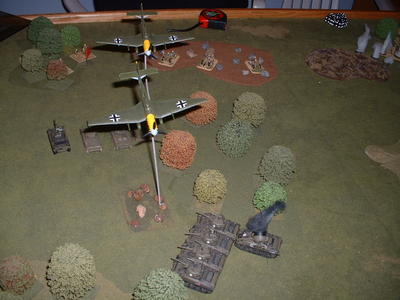 The centre was a no mans land dominated by 88's and 6pdrs.

The Australians attacked on both flanks.

On their right, Mark & Jim quickly ran out of steam against Barrie's Ities & went on the defensive as Barrie counterattacked.

On the left, Leigh's attack over a big flat topped plateau did well for a while but eventually petered out as the steep escarpments and the DAK whittled his armour away and the Grenadiers mgs did likewise to the PBI.

The Luftwaffe & the RAF both came often, but both achieved little.

The Ities were running out of Semoventes & their M14's were impotent against the Valentines which in turn weren't game to go near the Pak 40s on the objective. On the other flank both sides had destroyed each other's attack capability.

A quiet night -- only Chris and Nick. (Starn was out sick). We wanted a quick fun game, so back to Flames of War. Chris rolled up some terrain, using a system he just invented (he has a new terrain system each 1/2 hour). But we didnt want to move terrain, so we superimposed the terrain on the geography of the Rivoli battle from last week. I.e., we moved some hills and villages, and added a lot of woods!

Chris wanted to use his new Russians, all based in winter white. I didnt have much other than German armour to oppose them. So instead we got out my Yanks and did a match up (I was imagining it was Patton gone hog wild into the Russians ....)

The first thing I noticed was that the way to stop Russians is with Artillery. And the best artillery in the game is American, with all their special rules. The Russians were melting away like snow in August -- all those American 'time on target' artillery barrages were devestating.

The other thing I noticed was how usefull recon platoons can be. I advanced a small recon platoon after the setup, and as my first move doubled it into a woods on the other side of the table. It spent the whole game sitting in the wood, but threatening to take an objective. Chris either had to move something back to deal with it, or leave troops behind to contest the objective and march on. Eventually he left a matilda (lend leased to the Ruskies) to guard the objective -- but I was able to move to threaten the other objective, so he had to use his AA to protect that one ..... In the mean time the rest of my army concentrated on destroying his army, which they did very effectivly! Stuarts rock!!!! 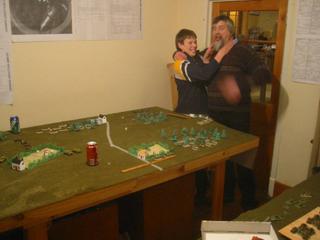 Junior's US Infantry (with lots of armour) v. Senior's Panzers in a 1500 pts FFA on a small table.
For a while Old Oakie looked good against his 12 YO. He drew the Shermans off to his right flank while the MkIIIs & IVs cleaned up the Honeys and rushed the other objective. There was a furious battle for that objective that drew in all the armour from the other flank & it changed hands several times as Oakfords Senior & Junior traded 6's. But on the other flank Dillon's GIs attacked the Grenadiers in the wood, got lucky, and took the other objective. 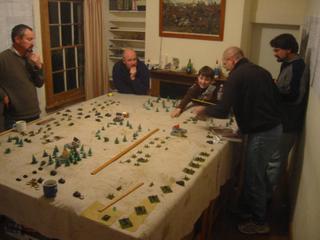 Both sides seemed to comprise an enormous number of small platoons, especially Nick's - deployment took longer than a big order at da Angelos on Friday evening. This was followed by both sides sitting back and sniping at each other with artillery & airpower - not very exciting for the spectators/umpires. Nick livened things up with his sneaky use of the Tank Destroyer Ambush Rule - dropping them down and double moving onto an uncovered objective. Fortunately for Steve, the Luftwaffe turned up next turn and blew them back off it before they won the game (by holding an objective unopposed at start of own turn). Steve finally made an advance on his right, but when an unfortunate run of bad saves destroyed his Engineers & decimated a Grenadier plat he went back on the defensive. Nick started a counterattack, but when the Hun artillery took out his SP AA and thus his mobile firepower, his attack too petered out. With midnight approaching they agreed to a draw and a rematch.
Posted by Nick at Friday, July 01, 2005 1 comment: