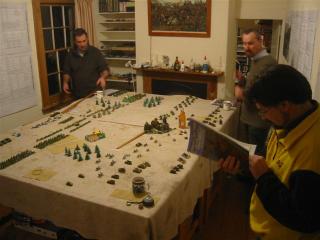 FOW Free For All

Jim faced Peter & the 2 Steves faced each other on the other flank. In the pic the Russians are on the left, the Steve's are on the far flank.

The Russian PBI stormed forward getting slaughtered in droves as usual. Steve's T34s cleared the ridge on the German right flank, but were then destroyed by the German artillery & 88s on the far side. (Veteran Steve was giving New Steve FOW lessons but it seems his help only went so far). Thus Steve's attack petered out and he fell back with the survivors to avoid a company morale test.

On the other flank, Jim demonstrated how to deal with Panzers. His 4 SUs advanced on the 3 MkIV*s - 4 shots, 2 dead Panzers and the other failed morale (as did Peter). The Panzer Grenadiers put up a stiff fight for the objective, but the surviving Ivan PBI just wouldn't fail morale. Forced into desperate counterattacks to dispute the objective, Peter's company lost too much and failed morale. 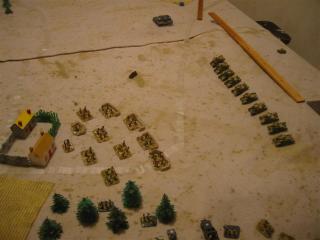 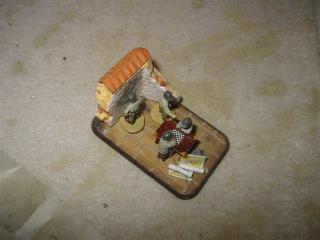 The Yanks put their Pioneers on the forward objective, infantry in support, artillery in rear & a/tank guns in ambush. The Ities massed their armour on their left flanked by the Bersaliglieri supported by the 90s in the centre & artillery in right rear.

Things started badly for Il Duce. Half the army threw 1's for 6 Million Bayonettes & became Reluctant Trained, the Honeys came on first turn, the Itie Recon were wiped out by the a/tank ambush & the 105s took out a 90.

There was a brief tank v. tank skirmish before both sides' tanks rushed past each other. The Italian armour disposed of the a/tank guns while the Honeys destroyed the Bersaligeri and the last 90. But the Iron Coffins were now threatening the objective and the Honeys had to rush back to help the infantry.

The pic shows the Italian armour charging over the ridge from the flank, Honeys on the far hill & an SPG in the foreground. The Pioneers had just been obliterated by tank mg fire when they moved to face the attack. The Honeys failed to hurt the M14s and next turn the hot shooting Ities wiped the remaining US armour.

The US artillery seemed more interested in playing chess than doing damage (see pic). Their sole contribution was one 90. The Itie artillery did little more, though their counterbattery fire did contibute to the US artillery's lack of action. The USAF were even worse - they didn't even show up - not once! Gods way of evening up the 6 Millon Bayonett rolls perhaps.

The US infantry made a brave attempt to drive the crowd of M14s off the objective, but it was forlorn hope. One bazooka kill was the best they could do. The Italians lost 3 platoons, the US 4...a 4:3 victory for Il Duce.

The plot's crap, but Great seige scenes. The trebs are just terriffic. Saladin's cavalry look good too. Worth seeing - heaps better than Alexander.
Posted by Nick at Thursday, May 19, 2005 No comments:

James' Grenadiers v. Dillon's US Infantry in 1500 pts Free for All.
James sent his armour (1 Tiger + 2 MkIIIs) to the right to deal with the Shermans and left his left flank under-protected. Dillon's Honeys, supported by artillery (3T19/105s), took out the Grenadiers, mortars & 2 Pak 40s protecting the German left and took the objective for the loss of just one tank. It seems "Tiger Terror" is being surplanted by "Honey Horror".

Barrie, Leigh & Jim had a hard core afternoon & evening of wargames with footy on the box.
We tried out some of the less used scenarios.

We were fumbling a bit with an unfamiliar scenario. Barrie probably made a bad call making it a dusk battle as it slowed down his guys relatively more than the Ities. The Ities also did well with their deployment dice, getting most troops turning up at the right end of the table to cut off the retreat. It ended with the last surviving Brit team surrounded by 6 Itie platoons. The 5 Semoventes assaulting a single team to finish it off looked a bit like overkill. No Brit survivors, so a 6:1 win for the Axis.

An interesting scenario, but the outsome is very dependant on the luck of where the defender's reserves arrive. But it was good to give the Sahariana & LRDG a run - such cool stuff !

Barrie's Sherman ambush was used up stopping a dangerous infantry push. The MkIIIs then rushed an objective and survived the Sherman counterattack to win the game. The USAF failed to arrive at all. A 5:2 win for the Axis (1 Gren plat lost).
The withdrawal schedule takes a bit of getting the hang of (we think we got it right). Not sure if I enjoyed it because it was a good scenario or because our plan worked so well.

The USAF tried harder this time. They turned up every time for the first 6 turns (before disappearing again). They were pretty ineffective against the dug in German vets, but on turn 3 when the 3 planes attacked the wrong side they destroyed the US M8 platoon (the Lees & Priests waved their attackers off). When the 2 Pak38's ambushed the Lee platoon & destroyed it in 2 turns it was Game Over. A 6:1 win for the Axis (total German losses 3 inf teams).
This scenario is a modification of Hold the Line (off the website) - it's a bit more complex and not really an improvement.

Steve J made a methodical attack on his left with the Panthers & P/grenadiers. Steve P fought a delaying action with infantry supported by the SUs & KVs, frustrated by the Stormtrooper moves over a crest & back continually subjecting him to fire without chance of reply.

On the other flank, Peter's MkIV*s & Pak40s pussyfooted with the T34s, killing most of them. But the Russians kept passing morale while the Panzers funked off after just 3 kills.

The T34s then rushed the objective and endured repeated counterattacks. They kept losing tanks one by one, but they just kept passing morale until the very last tank held the objective undisputed. By then Steve J was almost through, but it was too late.

The Russians won a battle they should have lost. Of their 10 platoons, 5 were lost, 3 had 1 or 2 survivors & one was about to be overrun by Panthers.

Thursday: There's talk of doing something completely different, maybe an Ancient &/or Modder Fokkers.
Posted by Nick at Thursday, May 05, 2005 No comments: