Campaign in Spain 1809: Battle of Majadas

After the battle of Ceceres on Day 8 the French fell back.   Wellesley dithered, perhaps unable to decide whether to pursue Victor or push on to Madrid.  The unmolested Victor took advantage of an unusually good supply situation to also sit around doing nothing a days march south of Wellesley.  When Wellesley finally ordered his force south after Victor he found that Victor had just left, moving south.

Victor had moved south because he'd found out that Cuesta's Spanish army had reached Majadas and cut his line of communication to Madrid.  On day 15 Victor found Cuesta deployed just west of Majadas with his left flank in a village & his right protected by mountains.  Cuesata had been there long enough for his batteries to be in redoubts & the village streets barricaded. Wellesley is a days march behind him, so this battle is a must win for Victor.  Defeat will mean disaster. 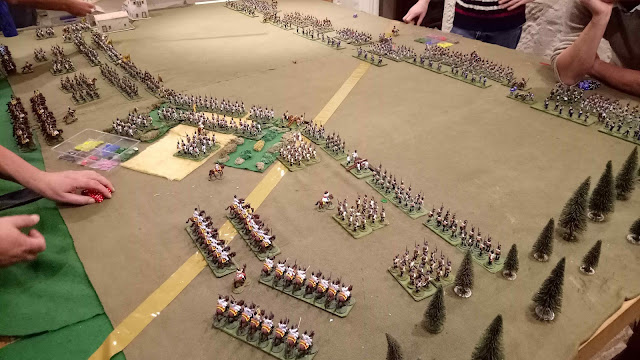 The Spanish are on the left.  The French are making a general advance on the whole front. 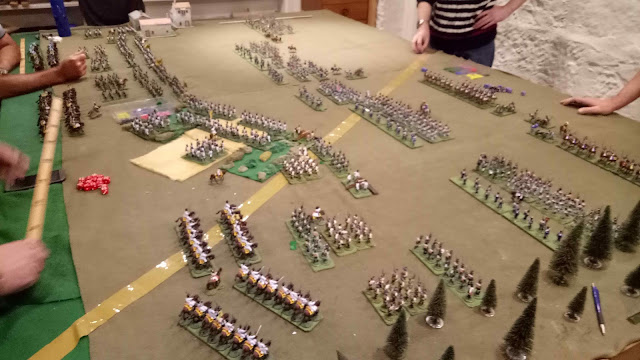 The French light cavalry has arrived last having been the rear guard facing Wellesley.  The French infantry is advancing behind a screen of light infantry.  Unlike Sebastiani last week, Victor seems to have been reading his infantry manual. 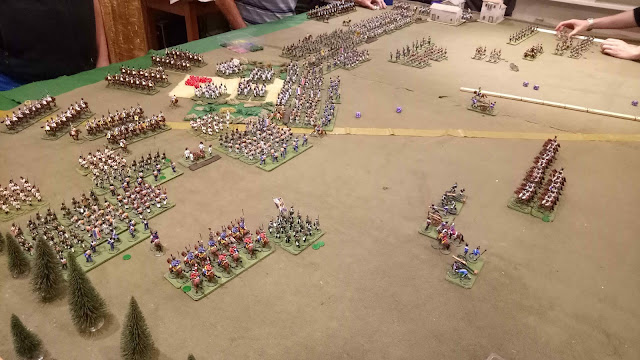 Victor has attacked left and centre.  On the far flank the Spanish have made noises abut a counterattack, but there's no sign of it.  Initially the French attacks did not go well.  On the extreme left it turned into a dour struggle of attack & counterattack.  On the left of the vineyards there was success, but the Spanish cavalry stopped exploitation as the columns formed square.  The attack on the vineyards bounced off.  In the centre there was no immediate breakthrough either. It was looking like the Spanish might have a chance.

But our Break if Spanish rule is an insidious thing (they count Break if Shaken as Break if Spanish).  Spanish units starting breaking all along the line & very quickly the Spanish line started to crumble.  First their right broke, then their centre.  Cavalry plugged the gaps, but then a ring of fire broke the brigade in the vineyards & the Spanish had nothing but cavalry right of the centre.  They could do nothing against the line of squares the French deployed to cover their front while they brought up their artillery & cavalry. 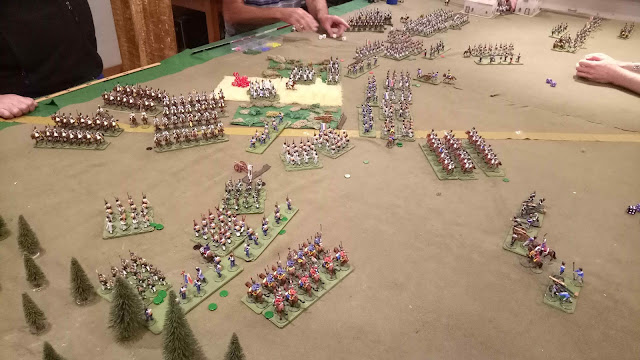 The Spanish conceded the battle & sounded the retreat.  With plenty of cavalry they were able to break off & retreat south on their line of communication.

Tomorrow Victor will regain his Line of Communication to Madrid.
Posted by Jim Gandy at Tuesday, April 25, 2017 2 comments:

Barrie was away this weekend & Rusty, John & Derek came to check out the new Good Games. 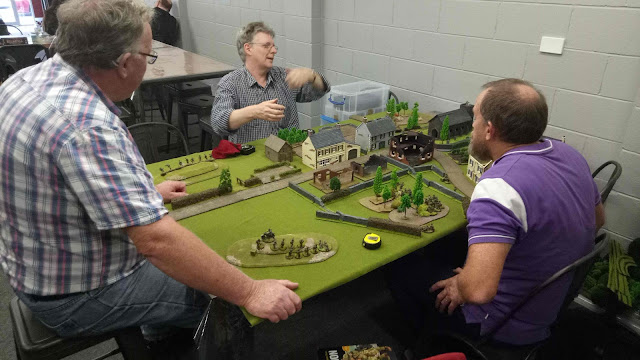 I lent Damian my Brits & we fought a meeting engagement.  Somehow I didn't get a pic of my  battle, but it was a good one.  At the end of turn 6 were were tied at 2 units lost each & it looked like a draw.  But the dice gave us a turn 7 & suddenly it all changed.  I got the first command dice & used it to fire two fausts at "Toast" the ever unlucky Cromwell.  It caught fire & the bots bailed out.  This freed my Stummel to pop out & it wiped out one unit with its howitzer & another with its mm.  Suddenly the Bad Guys were 3 kills up & the Brits had no way to come back.
Posted by Jim Gandy at Sunday, April 23, 2017 No comments:

Dave set up a Wars of the Roses game based on Blore Heath.
Jim commanded for York, Peter & Dave for the Lancs. 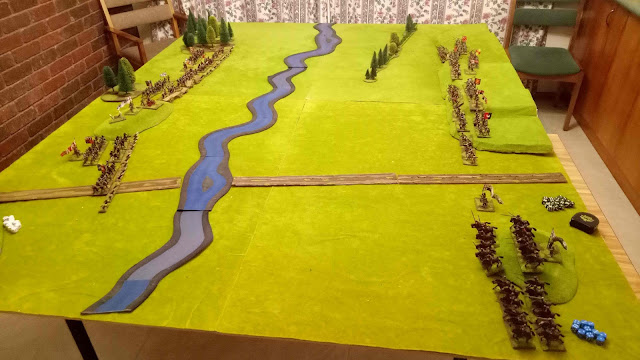 York is on the left.  Their army is smaller, with no cavalry & many less archers, but has some stakes & wagons to help stiffen their line & a cannon. 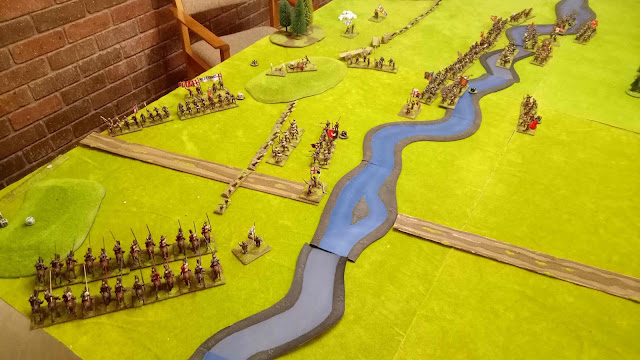 A line of stakes isn't much good to you if the enemy cavalry can ride around it & faced by superior numbers of archers, the Yorkists pulled back their right & counterattacked on the their left & centre after the enemy crossed the river. 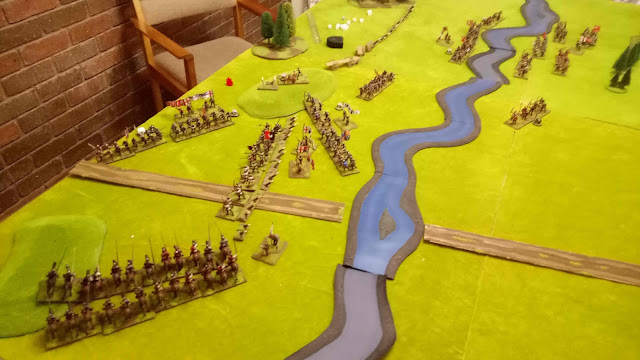 On the far flank the Lancs fell back across the river. In the centre the Yorkist gun proved surprisingly effective as the Yorkist centre battle swung right to counterattack. 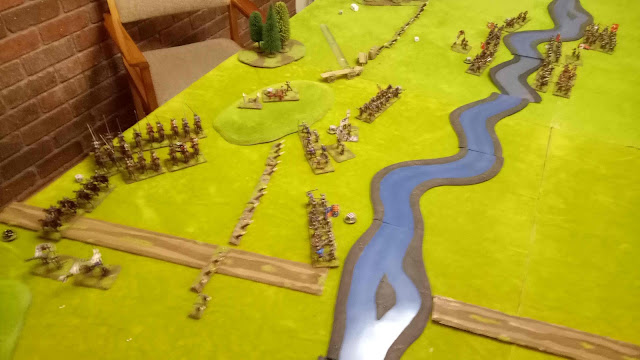 The Yorkist counter attack came close to breaking through, but not quite & when the Lancs cavalry finally charged home on the Yorkist right which had had to leave their defences to avoid being outflanked it was all over for the house of York
Posted by Jim Gandy at Sunday, April 23, 2017 2 comments:

Joseph has sent Sebastiani's corps south from Madrid to meet Vanagas's army marching north from Andulasia.  On day 12 of the campaign the forces met just north of Dainiel. 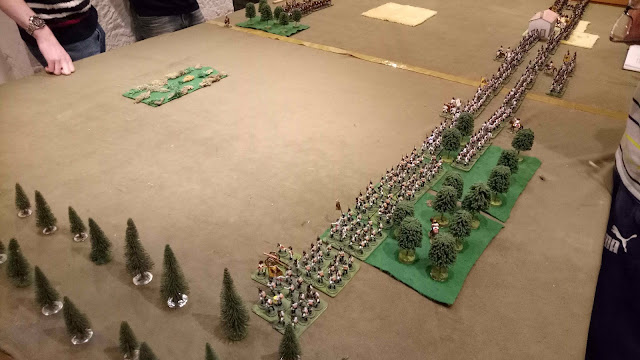 Sebastiani's advance guard of cavalry keep watch as the Spanish deploy & wait for Sebastiani's infantry to arrive on the road from left centre. 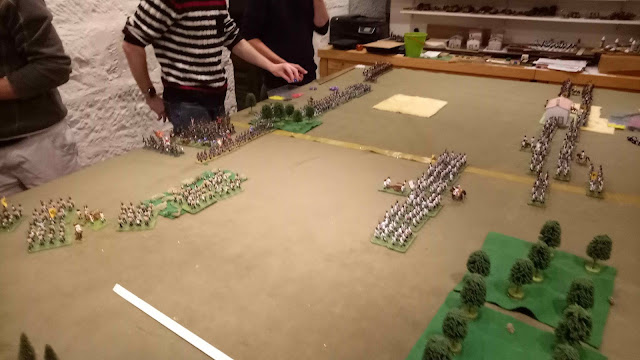 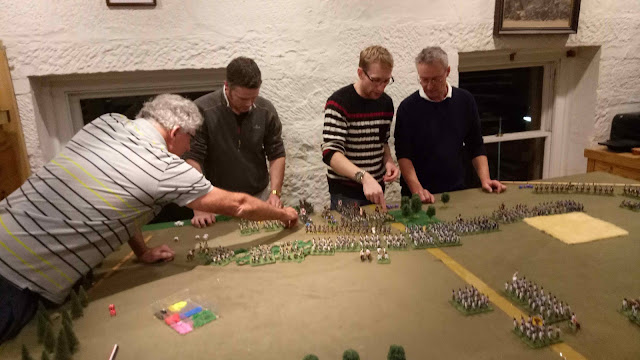 The Germans troops had a desperate fight on the hands as the tried to deploy in a restricted area under an uncharacteristicly vigorous Spanish attack. 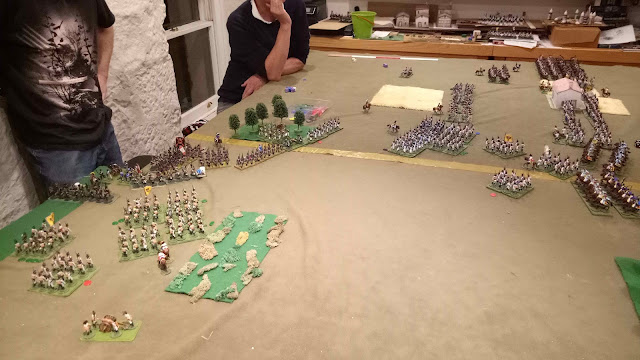 The Germans hung on desperately while the French launched their own attack in the centre & their left.  Both sides had light cavalry brigades come on late after returning from scouting duties. Sebastiani sent his to support his heavy brigade on his left.  Vanagas left his in the centre to support his infantry. 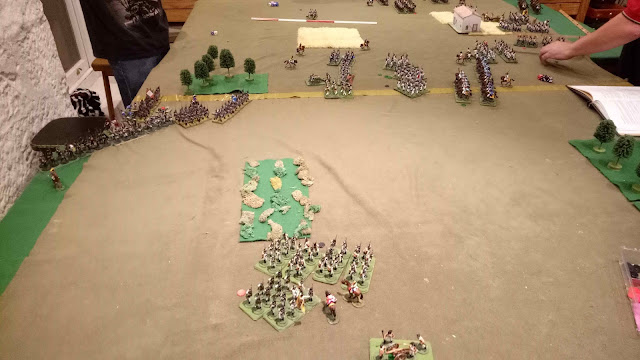 The Spanish brigade left of centre was broken by some stout defence by the Germans & the French counterattack in the centre.  The French infantry attack near the farm was a disaster & the brigade broke.  The French cavalry got the upper hand in the cavalry melee on the far flank and eventually broke the Spanish heavy cavalry brigade.

For a while it looked like the Spanish were going to win, but their poor command and the Break if Spanish Rule told in the end & their 3:2 advantage in numbers wasn't quite enough.

My Germans fought Sean's British in a Demolition scenario.  When we both put our bases (=enemy objectives) at the same end of the table it made it a difficult game to win as all the action congregated to the one end.  Sean did have an outside chance to win with a desperate charge at the objective on turn 6, but it failed & there was no turn 7 & the game was a draw.   It might be a worthwhile house rule to make the player put their objectives on different sides of the table centreline to make the scenario less likely to be a draw.
Posted by Jim Gandy at Monday, April 17, 2017 No comments:

Campaign in Spain 1809: Battle of Caceres

Last week we started a campaign based on the Anglo-Spanish attempt to retake Madrid in 1809.
The players are:
Umpire: Jim
Victor: Nick & SteveJ
Joseph: Dale
Soult: Dave & Mitch
Wellesley: PeterC & Mike
Cuesta: Mark & Chris
Vanagas: PeterW & SteveD
Some of the players are in Canberra.  All are involved in the email strategy, but the battles are all to be fought at Camp Cromwell by whoever from each side shows up on the night.

The first battle was at Caceres, a town about 90km from the Portuguese border about 1/4 of the way along Wellesley's direct road to Madrid.  Wellesley had moved quickly past the town.  With no news of the French he may have assumed they had gone south to deal with the Spanish, but to protect his  line of Communications he left a light cavalry brigade at Caceres & had their 3rd divison on the road from Lisbon about a week's march behind the main body.

But Victor suddenly appeared marching towards Caceres from the SW.  Wellesley reversed his Corps two days march beyond Caceres.  He sent his heavy cavalry division ahead to join the division on the road - which it did before the French reached the battlefield. 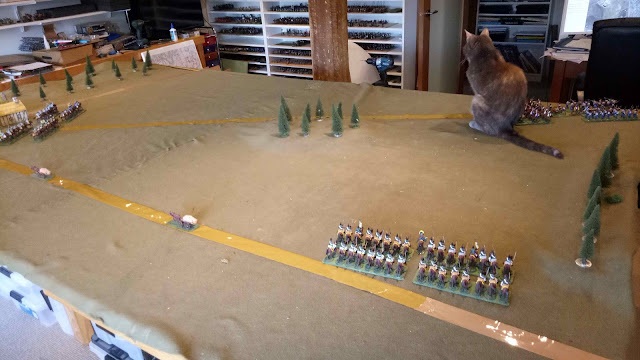 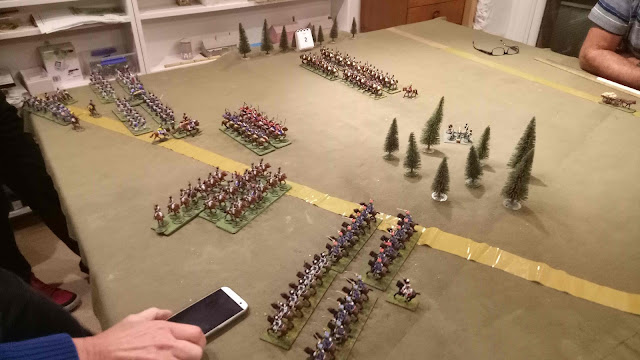 The British throw their cavalry forward to disrupt the French deployment. 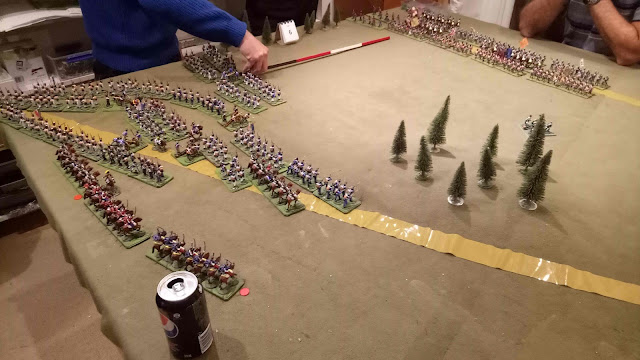 The British light brigade was broken & the heavy brigade thrown back, but they did their job of delaying the French deployment & the British 3rd division has had time to come on & deploy to meet the French attack. 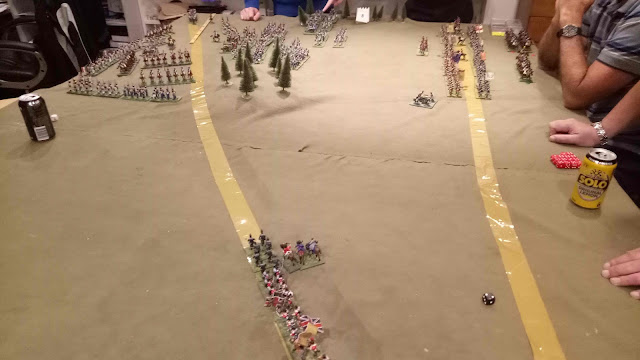 The head of Wellesley's column has arrived, but it is in single file of units because it has debouched froma pass earlier in the day (on good ground forcess march in double columns each side of the road with the artillery & baggage on the road). 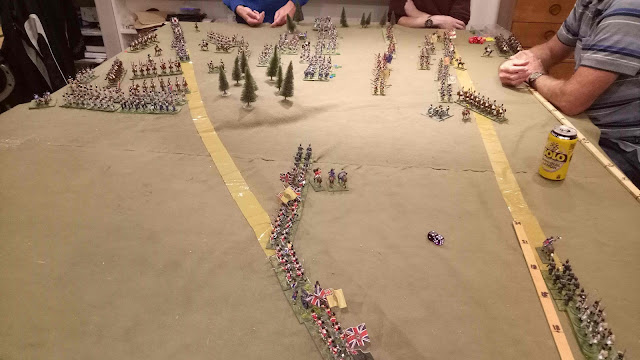 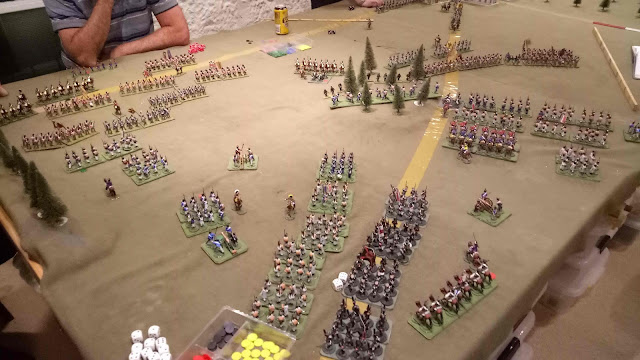 Regrettably there's a bit of a gap in the photo record here.  The French columns pushed the British line back, but the first line ran out of steam & the second line hadn't come up fast enough to provide immediate support before Wellesley started to close in on the French right.  Victor ordered a retreat after 1infnatry division broke.  Another was broken while acting as a rearguard, but Victor made good his escape with just 2 of 6 divisions broken.  The Brits had 1 light cavalry division broken.

The Brits had considerably more troops in the area that the french, but the French had the opportunity to defeat them in detail.  Victor had to break the 3rd division before Wellesley could bring superior numbers to bear.  Had he done so he would have been across Wellesley's Line of Communication forcing Wellesley into a do or die situation.  But the British cavalry, poor French Command dice & a bit of French indecision due to poor intel caused enough delay to save Welessley.

The campaign rules provide for limited intelligence.  Before this battle Welelsley was blessed with good intel dice & had a good idea of Victor's strength & position.  Victor on the other hand had poor intel dice plus high guerrilla activity to deal with.  He had no idea of the British strength or location until he they got onto the battlefield, but marched boldly forward against Welelsley's LOC regardless.  But as he always did in real life, Wellesley managed to wiggle out of the trap.

I lent Brad my Brits & we fought the Hold Until Relieved scenario. 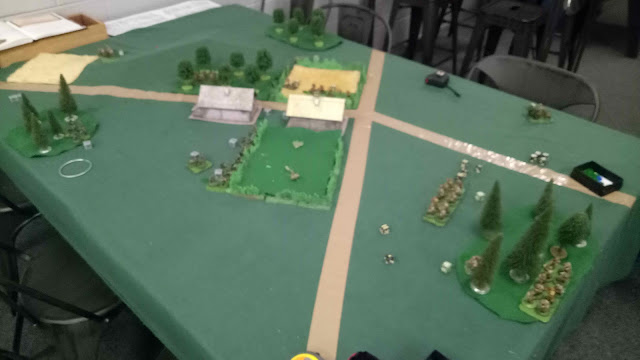 The LH house is the objective defended by my Germans whose table edge is on the left. 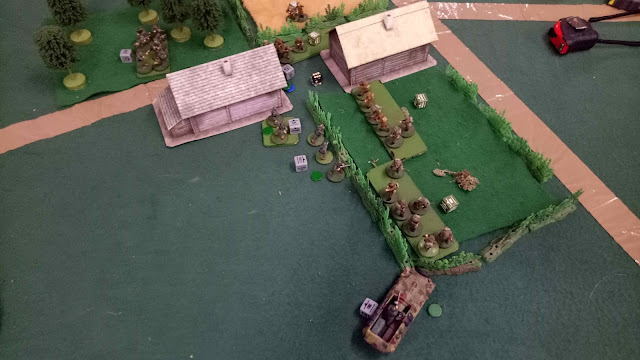 Brad was a good player & it was a good fast moving game that ended in a draw after turn 6.  Another turn might have provided a winner, but the dice decreed there wasn't one.
Posted by Jim Gandy at Monday, April 10, 2017 No comments:

While we had the desert on the table we decided to shift back in time & give the Arabs a change from Martini-Henry's by pitting them against Crusaders instead. 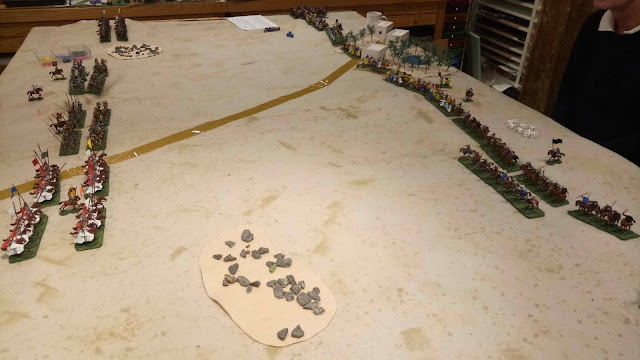 Mike's Crusaders are on the left.  Steve & Jim command the Arabs on the right. 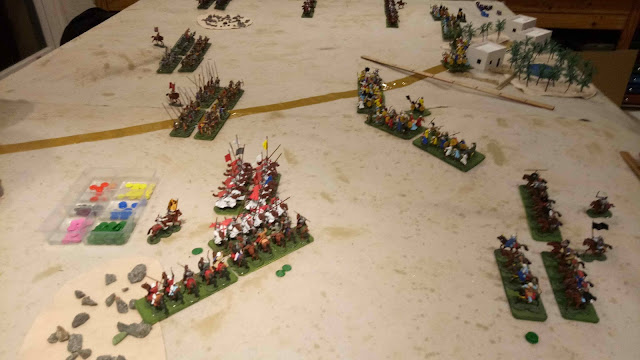 The battle opened with a cavalry clash on the rear flank .  The Crusaders initial success has been tempered by a counterattack on their flank. 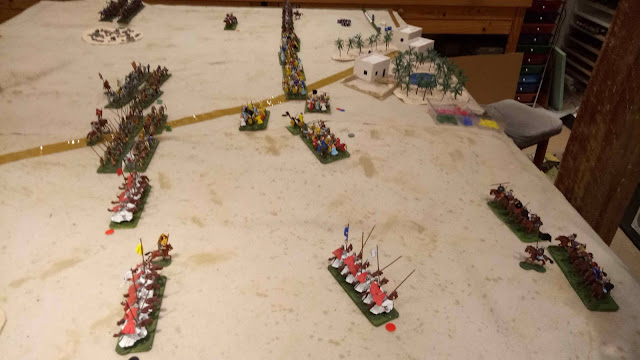 The Crusader horse has beaten off the flank attack & the Arab left about to break.  Poor command dice has held back kept the Arab plans for an advance on their right. 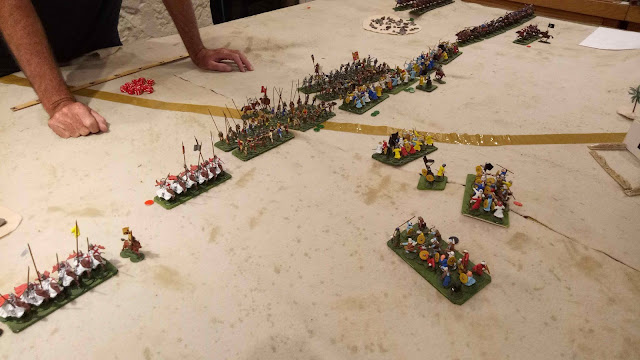 The Crusader horse has seen off their opposition, but have fallen back to rally as Arab infantry follow up with archery.  But they did not get back fast enough & the division is broken.  The Arabs have finally got their right to advance. 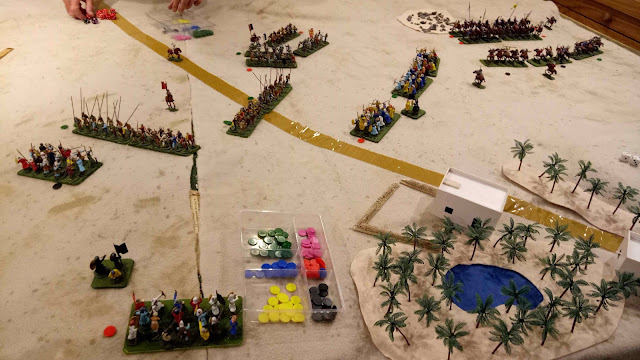 While the white knights have broken,  the Crusader foot has got the upper hand in the centre while the opposing cavalry is neutralising each other on the far flank.. 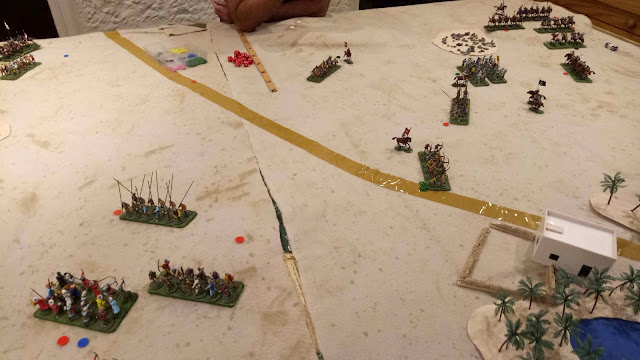 The Arab foot has broken giving the Crusaders victory.
Posted by Jim Gandy at Tuesday, April 04, 2017 No comments:

Matthew's Brits v. Jim's Germans in a Hold Until Relieved scenario on scenery brought by Matthew. 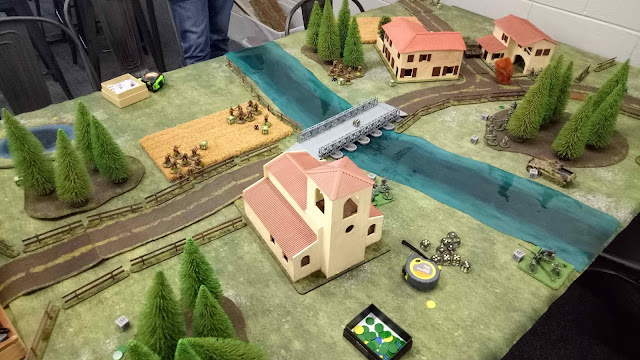 The Brits were defending the bridge.  The Germans did well at the start, but like the real thing, the tide turned & despite some initial success, the British struck back & won comfortably in the end.

While there was only one game this afternoon, we had some apologies & some spectators expressing interest in future games in the Sunday afternoon timeslot at Good Games.  So it willl be on again next Sunday from 12 noon.
Posted by Jim Gandy at Tuesday, April 04, 2017 No comments: