Initial deployment, Ottomans on the left.  The Poles have concentrated their cavalry on the far flank.

The Ottomans send their light troops forward & start moving their right flank cavalry to their left behind the infantry.  The Poles try to make a general advance, but their infantry fall behind with bad command dice.

The otoman cavalry on their left is outnumbered as well as out matched & is soon driven back.  The Jannisaries face left as the right flank cavalry arrive in the nick of time to cover their flank.

The otttman left flank cavalry has been destroyed, but their left flank has been reformed.

As the Poles prepare for an assault on the Ottoman left, the Ottomans launch a counterattack with their levy on the right fearing that their left was doomed once the Poles attacked the angle.

The Ottoman left is holding on as their right attacks, but the writing is on the wall.

The the converging attack was too strong & the Ottoman army is broken with just the 2nd levy brigade left unbroken.

The next Camp Cromwell Tuesday will be March 26 as I will be away kayaking from the 4th to 19th March.
Posted by Jim Gandy at Tuesday, February 26, 2019 No comments:

We fought the Iula scenario from the Black Powder supplement Glory Halleujah! (with a few tweaks).

The Union (Mike & Chris) are on the right with 2 brigades marching down the road surprised by Confederates (Mark & Jim) on their right flank.   There is another Union brigade coming down the road behind the others.  The Union have to drive the Confederates back & take the T junction on the left in 8 turns to win.  The woods are open woods with no effect on movement, but count as cover & reduce range to 12".

The larger Reb brigade deploys to defend teh road.  The smaller one advances to the edge of the wood on their left to delay the Union reserves.

On the near flank the two sides are blasting away at each other across the road.   In the centre the Rebs are giving ground but hanging on.  The 3rd Union brigade has been slowed by bad commnad dice.

The Reb left is giving ground to prevent it being outflanked, but the Rebel line is still holding.

The 3rd Union brigade has finally got into the action & the Rebel left has collapsed.  But the Union left has also been broken allowing their remaining brigade to reface to their left.

The Union numbers are now counting, but the Rebs have held on to the T junction just long enough to claim victory.
Posted by Jim Gandy at Tuesday, February 19, 2019 No comments:

There are 5 objectives.  The German plan was to grab 3 & hang on.   The Soviet plan was to attack the German's left & take one back.  The German left was a bit weak, but they intended to support it with the Panzers in the centre after securing the centre objective on the road.  But the Soviets got a nice combination of late command dice one move & early ones the next & their suicide squad in teh jeep took out the left hand hand panzer before the panzergrenadiers got a shot at them.  They died, but too late.  The Panzers then failed to hit a thing as the Soviet armour picked them off.

Robbed of support from the centre &under attack by Soviets throwing shirtloads of 6's the panzergreandiers on the left hand objective were destroyed & the Germans had nothing near enough to take it back.  In some battles nothing goes right fro one side.
Posted by Jim Gandy at Sunday, February 17, 2019 No comments:

Chris bought a bunch of AWI miniatures cheap at Cancon, which brought our numbers of AWI figs up to Hail whoever level so we had our first AWI using Hail Frederick ratehr than Musket Action.

The Brits are on the left.

The only Colonial advance was to move their woodsmen forward through the woods on the far side of the table.  The Brits advanced on the whole front.

The Hessians on the British left are driving the woodsmen back out of the isolate wood, but losing casulaties in the process.

The French cavalry have fallen back to avoid arrows from the wood.
The British regulars are preparing to attack the Colonials on the ridge.
The French regulars have deployed along the treelines & are waiting for the Hessians
Indians & woodsmen are skirmishing the far woods.

The French cavalry charged.  The Indians evaded back into the woods & the British cavalry countercharged.
The Britsh attack on the ridge failed miserably due to unusually good shooting by the colonials.
The Hessians in the centre were stopped then broken by French fire.

Outflanked by French cavalry the British regulars have withdrawn.
Outflanked on the right by the French &their left by woodsmen, the surviving Hessians are also withdrawing.
The British conceded the battle.
Posted by Jim Gandy at Tuesday, February 12, 2019 No comments:

Mark's Scots deployed first with most of his troops map deployed hidden by a ridge & woods.
2 infantry brigades of 2 pike & 4 shot, a cavalry brigade of 4 lancers & 2 dragoons & a highland brigade of 3 highland mobs & 2 muskteers skirmishers, plus 2 guns. 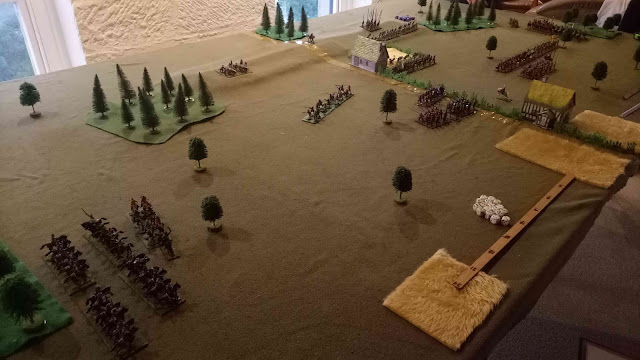 Most of the Scots are out of sight.  The English send cavalry around both flanks with infntry in the centre. 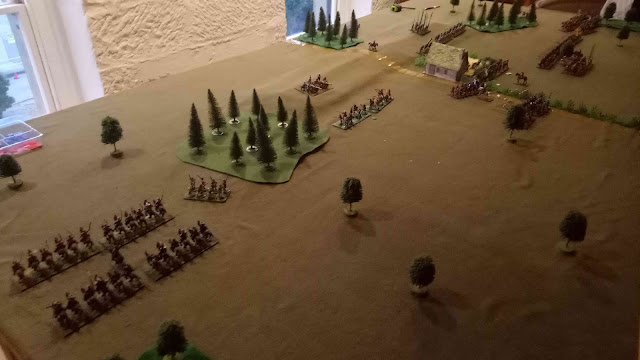 Dragoons scout the woods to cover teh cavalry advances.  Skirmishers engage the guns. Musketeers attack the Scot's forlorn hope in the farm. 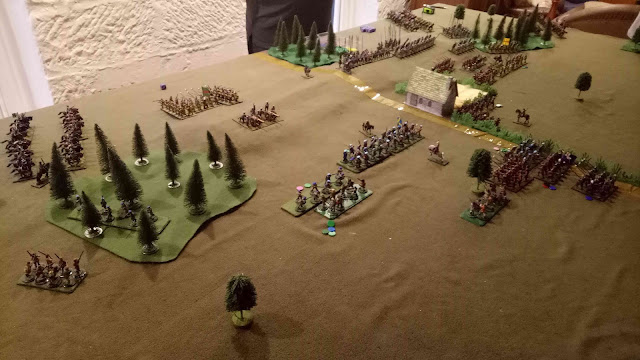 Both cavalry wings find a hedgehog behind the Scottish flank.
On the far flank it is supported by cavalry.
The highlanders charge over the hill against the English left. 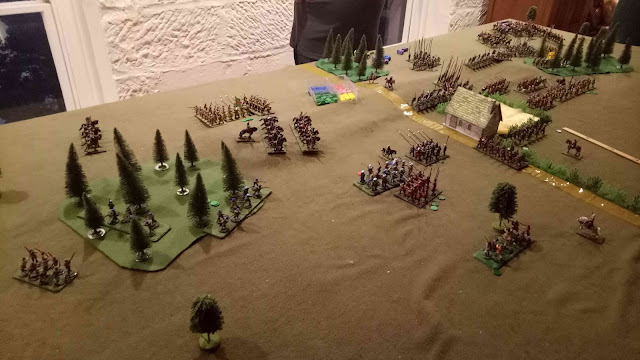 On the English left half their cavlry pin down the hedgehog while the rest ride down the gunners.  The highlanders break the musketeers in the English front line, but are themselves broken by a counterattack by pikes. The English attack right of centre is not doing well, nor is their cavalry on the far flank. 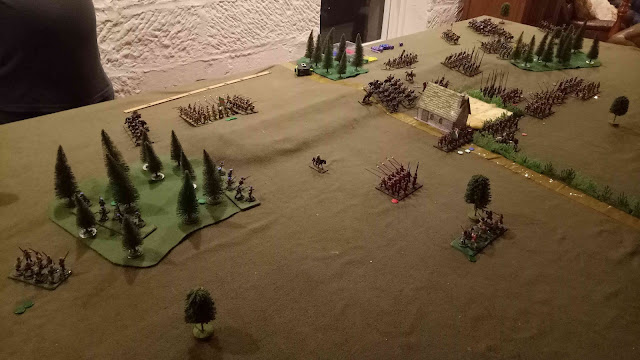 The English have broken thru left of centre, but teh Scots are counterattacking on their left & their cavalry is well on top. 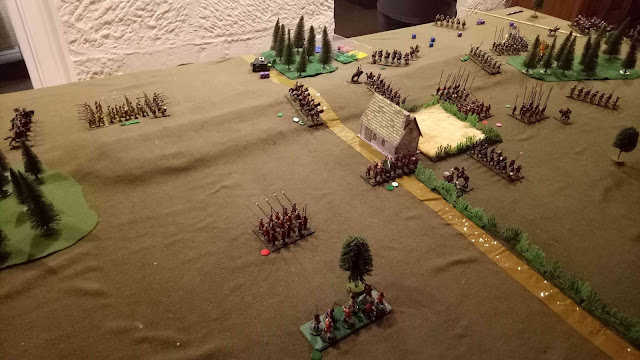 The English cavalry on the right has broken as has their right flank infantry.  The Scits have lost 1 brigade of 4, the English 2 of 4, so the English fail their army break test.

The Scots thought they had an ok plan & Mark made a pretty good defence resulting a close battle that coudl have gone either way right up to the last turn.
Posted by Jim Gandy at Tuesday, February 05, 2019 No comments:

After some years of ill health, my wife Carmel passed away last week.  A house full of relatives, wargamers & other friends celebrated her life at her wake yesterday. 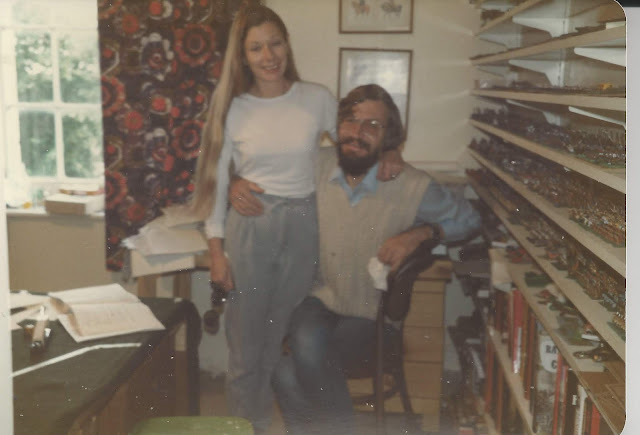 This is us in 1983 in my wargames room in the first house we bought together.   We'd met on a blind date set up by an old flatmate of mine who'd become a workmate of Carmel.  Blind dates don't come any better.  She wasn't into wargames per se, but was into history enough to have an appreciation of my obsession.  She tolerated the biggest room in our houses being devoted to wargames & our house being invaded by my wargames mates at least once a week.  She happily structured our European holidays around my wish list of battlefields, military museums & fortifications.  We'd been together for 36 happy years.