The scenario is based on the Wilsons Creek scenario in Glory Hallelujah Black Powder supplement, which is itself only roughly based on the actual battle in 1861.

On turn 3 the Union flanking force comes on the Reb left flank.

On turn 4 the Reb's cavalry comes on behind the Unions's right flank.  The Rebs call off their advance & reface their left to face the flak attack.  The Union turn some infantry to face the cavalry threat.

Both armies have ordinary command ratings (8) & are having trouble getting their plans to work.  The Reb redeployment was too slow, but the Union flank attack also moved too slow & the Rebs still managed to reface in time.

The Reb cavalry have been caught up with by Union infantry (the woods robbed the cavalry of their normal move advantage).  The Union are trying to attack all along the line & especially apply pressure to the angle where 1 Reb brigade has already been broken by converging fire.

The Reb cavalry has been broken.  The Rebs have lost 2 brigades & the Union none.  A round of hot shooting has blunted the Union advanace on the far flank, but more fresh Union troops are moving up & they use the advantage to break off the battle & cut their losses.
Posted by Jim Gandy at Tuesday, May 28, 2019 No comments:

The Crusaders are on the near side. They have a small advantage in points, but the Byzantines are on a slope giving them an uphill advantage.

The Byzantines are counterattacking with their best infantry & cavalry fearing they will be outflanked if they stay put.

The Crusader's plan on the left broke down when the cavalry fight quickly & the infantry trying to outflank the Varangians had to turn & face the Byzantine cavalry. On the right, the Crusader cavalry came back though the Byzantines were able to turn their second line of cavalry to meet them.

The two cavalry of btoh sides are kept apart by a mass of fugitives & pursers after one of the Byzantine foot units broke & was pursued.  But the battle was decided when the Crusader heavy foot were finally broken by the Varangians causing the Crusaders to fail their Army Morale Test..
Posted by Jim Gandy at Thursday, May 23, 2019 1 comment:

We used the same armies as last week but tweaked the terrain a bit & used a simple free-for-scenario with blind deployment.  This week Jim, Chris & Steve were the Brits & Mike, Mark & John the Colonials.

The British on the right have had the first move. They have:
- Their British vets on their left with their cavalry on their flank.
- Light infantry & Hessians advancing into the farm with guns eitehr side.
- Loyalist infantry on the far flank with Indian allies.
The Colonials have 2 Colonial brigades on each flank with the French & cavalry in the centre.
Their artillery is also in the centre & woodsmen on each flank.

The Brits advance their centre & left.  The French send their cavalry to the right.  Colonial infantry move up to the crest to fire at the Brits.

The French cavalry & Colonial infantry launch a counterattack on the British left.
In the centre the Brits are trying to neutralise the French guns with skirmishers & have advanced their guns to enfilade the Colonials on the ridge.

The French & Colonial counterattack was blessed with fearsome dice & the British left has been mauled & forced back.  The French infantry have advanced to add pressure on the British vets.  The Colonials left of centre are attacking the Hessians in front of the farm.  On the far flank both sides are trying to attack despite their poor command ratings.

The French & Colonials have renewed their attack on the British right.  The British cavalry has broken & their vets are in deep trouble.

The British attack on the far flank is finally making progress & the Hessians are more than holding their own in the centre,  but the British infantry are under attack by ring of infantry & cavalry.

So our pair of battle in successive weeks have both been wins for the Colonials.

We'd developed Musket Action so we could fight AWI & F&IW battles with a limited number of troops.  But the numbers kept growing & we now have enough to fight the era using Hail Napoleon.
The Scenario: 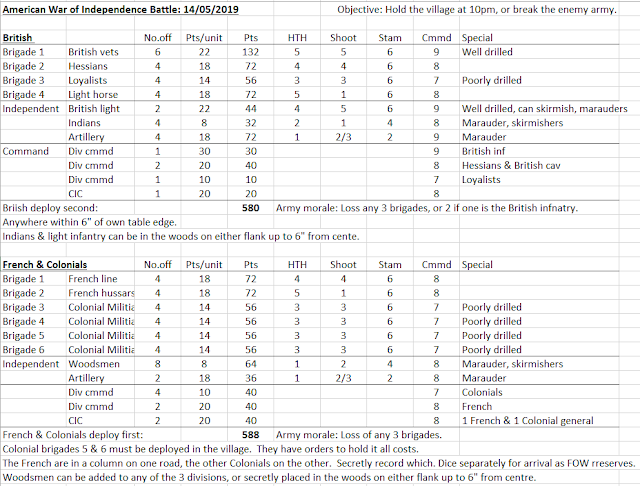 The British are deployed on the left.  2 Colonial brigades hold the village with reinforcements on the way from the right.

The British are softening up the Colonials with cannon & musket fire but the French column is already on the table.

The first British charge on the village on the far side has been repulsed as the Hessians are still advancing in the centre. The French are deploying to the left to face the Royalist infantry & British cavalry.  On the near woodsmen skirmish with the Brits Indian allies.
The French cavalry have charged on the left of the village.  The Colonials in the village are still holding the British vets off.

The French cavalry have punched a hole through the enemy infantry but have been stopped by the cavalry behind.  The infantry in the village are still holding on despite being attacked by artillery from one side & veteran infantry on the other.

The Colonial reinforcements are slow in their advance, but so are the Hessians.

The French cavalry have fallen back to let their artillery space to fire.  The Colonials on the left of the village have fallen back, but not broken allowing the French to take over their position.  The Hessians have finally charged home, but are not doing well.

The French have taken over the defence on the left where the Brits have run out of steam & the Loyalists are being blasted apart while the Hessians have also been repelled on the right.  And the Colonial reserves have only just started deploying.

The British have conceded the battle & begun a withdrawal.


The Colonials put up an amazing fight in the village (sound enough defence, but a lot of good luck as well).  The French cavalry charge also severely disrupted the British attack & took some pressure off. The skirmishing on the near flank was a side show.
Posted by Jim Gandy at Tuesday, May 14, 2019 1 comment:

There are 3 objective - the road junctions & the bridge.  Pics taken from behind the Colonial lines

The Brits have advanced quickly to seize the objectives.  They have Indians to hold the house on the right &  in the field on the left. The British Indians are opposed by woodsmen.

The Brits have put an infantry coy in the house on the left while 2 line & a grenadier coy slog it out with 4 regular Colonial coys.  On the other side of the creek thet are disrupting the Colonial milita's advance with artillery, light infantry & cavalry. One squadron charged & broke the front coy only to be destroyed when it tried to charge on over the 2nd line.

There is a hot exchange of fire all along the line with casualties mounting on both sides.

At the end of turn 6 the Brits hold the LH objective & the other 2 are in dispute.

Although the dice decreed game over after turn 6 we did another turn anyway.  It resulted in much needless slaughter without changing the outcome.

Cruel Seas in the Med

John brought his Italian fleet along so we attacked it with some Brits.
John & Chris's Italian mission was to escort 2 landing craft across the table.
Jim & Mike's British mission was to stop them.

The Italians (at the far end) have 4 fast MAS boats, 2 armed landing craft & a corvet.
The Brits have 2 Farmiles & 5 Vospers.

The light boats rush ahead into a mellee with each other.

The light boats pass through each other without any losses & the Brits start throwing torps at the big Ities.

Mitzi takes an interest as the Vespers close in laying torps.

The MAS boats turn to chase the Vespers as the Familes cover their back.

A torpedo takes out the Corvette as Vespers & MAS boats start going down under close range fire.

The Brits are down to the 2 Farmiles & the Ities have only 1 MAS & the 2 landing craft left.

It goes down to the last the last Farmile v. the last landing craft.  The Brits got first dice out of the bag & put it down with gunfire.

Another unrealistically high sinking rate, but we have no widows, orphans or screaming wounded & it was rattling good fun.