The scenario is a variation on the HTL. One objective was well protected by the 25 pdrs. The other was placed by the Huns just forward of a ridge that made it hard for the Brit to support it's defence. The Brits were fortunate early with their reserves coming on quickly, but they needed them to with the flat desert floor allowing the DAK armoured cars to zap forward at amazing speed.

The first attack of the a/cars was contained by infantry & HMGs until the bugs & Matildas arrived. The motorcyclists were too brave and got mowed down, but the a/cars proved to be hard to kill - they kept evading fire & when they did get hit, they kept saving (not only that, but with 2 car platoons they all had to be killed - no morale tests). The 25pdrs were pretty ineffective, the Germans having enough terrain to mostly stay out of sight on their chosen line of attack. The Luftwaffe came about every 3rd time as they should have, but were generally ineffective.

The a/cars took the objective fleetingly, but the Bugs & Matildas took it back. The bugs forgot they could evade & got zapped but the a/cars retreated from the Matildas as more Brit infantry came up. Then the turning point of the battle: The Luftwaffe bailed a Matilda & the Marders popped out and killed 1 and bailed another. The Matildas then failed morale plus the re-roll for HQ within 150.

The Brit infantry held the objective for a while but without support the a/cars whitled them down & the Brits failed army morale.
Posted by Jim Gandy at Wednesday, May 31, 2006 No comments:

The Kiwis have retreated & turned to face the Panzers in F5. As a result the battle is a semi FFA. Deployment was by platoons alternately, Kiwis start dug in & GTG. The terrain is open - mostly plain. The weather continued bad with heavy rain reducing visibility to 1m for most of the day. 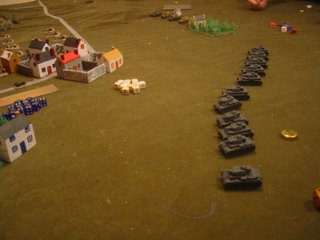 The Kiwis deployed well back with their 2pdrs as a forlorn hope in a small village out front. It proved remarkably tough & took a few turns to destroy. Though they didn't take anyone with them, they bought some time. The Kiwi engineers laid a minefield to protect the Kiwi LoS then retired.

On their right the Germans advanced the recon in front of the Tigers. They attracted the fire of the 17pdrs, evaded and gave the Tigers a shot killing a 17pdr.
Meanwhile on their left the Panzers, having disposed of the forlorn hope were advancing on the Kiwi supply line in a menacing line.

On turn 8, the Allied reinforcements suddenly arrived in strength on the German right flank. 4 M10s came on supported by GIs and took on the Tigers. They popped one & the 25pdrs buried the other in smoke. The Tiger and HQ MkIV counterattacked, but only got a couple of bails on the M10s. It wasn't enough & the 2nd Tiger went the way of the first. Then the Brat armour arrived as well. 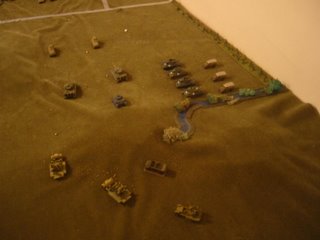 The Germans sent a Panzer platoon from the centre to delay the Allied reinforcements while stepping up the attack on the Kiwi right with the other 2 panzer platoons.
They zapped the Boffors and the HMGs, but the village full of Kiwis with sticky bombs wasn't an attractive target and the attack petered out when the 25pdrs behind the village beat off the Panzers.

The M10s & Brat armour overran the German right but night fell before they reached the German supply line.

A decisive Allied victory. The Germans were caught out by the Allied flank attack, but even so the Tigers could have won the day had not the critical dice rolls in the Heavy Weight Championship between the Tigers & the M10s gone very much the Allied way.
Posted by Jim Gandy at Wednesday, May 31, 2006 No comments: 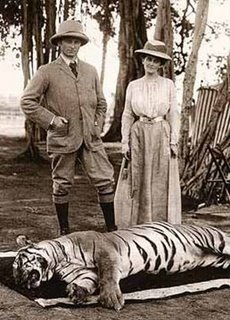 Two new players were introduced to FOW and enjoyed their game. Robert also dropped in for a while. 1500pts FFA Darren British light Armour vs Dion Panzer Kompanie. DAK deployed Carri platoon and Panzers on their right objective & Honeys, Recon 8 rads and 2nd Panzer on their left. Brats: 2x brens on right, 1st crusader III's on right objective, 2nd Crusader III centre with 25 pounder half battery, left 1x 4 Crusader II's Command & other 2 platoons Crusader III's. Both players advanced on each flank to engage. The Carri platoon were hull down but were the first to be killed by swarms of Crusaders on the Brats left flank. The Panzers on this flank took out the 4 crusader II's and the Brat command but were swamped and killed by the remaining Crusaders. Both sides had lost their C in C's but the germans were closer to breaking and were about to lose an objective. The panzers doubled to protect their right hand objective and saved it. Meanwhile on the Brat right flank the brats lost 2x Brens (ATR's) but destroyed the Stuarts with support from some crusaders, so the germans failed Coy morale and fled. 4-3 win to the Brats and a close tussle without much coaching from the Referee :)
Posted by Jim Gandy at Wednesday, May 24, 2006 1 comment: 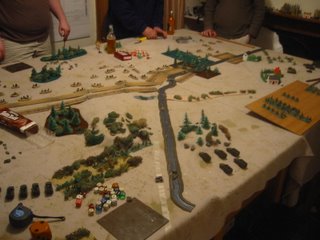 Chris, Stevesx2 & Anders with DAK Infantry defending hex D3
v.
Nick, Peter & Barrie with US Mechanised.
The Allied attack was supported by US Armour, the Axis defence by the Carri Coy.

The DAK held a strong line with the Medjeedar River across the left half of their front and mines & wire covering the other half plus the fords & bridges.
The attacking US Coy was actually weaker than the defending coy, but they advanced on their right against the river and initated a duel between infantry, mortars & anti tank guns The reinforcements on both sides did not arrive until late in the day and did not become seriously involved.
The late deployment of the Diana ambush caused some grief taking out 2 half tracks & most of their crew, but one bogged on the shuffle and was picked off by Shermans.
Casualties were pretty even and quite light, most troops did not fire a shot.

After the battle the Axis had a staff conference and provided their T3 orders.
In this turn it seems we will have 2 battles - the Axis wish to counterattack in D3 plus their Panzers are to attack the Kiwis in F5.
They want to do the F5 battle first. The Kiwis were pulled back from the defensive line last turn and will now fight without minefields or ambushes. Everyone is looking forward to a fight in the open for a change - maybe we'll get some decisive action this time.
Posted by Jim Gandy at Friday, May 19, 2006 No comments: 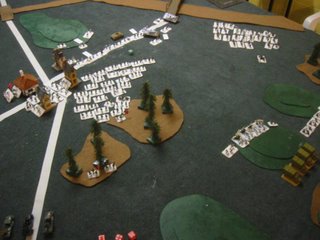 Jim's Russians v. Chris' Fins in 1500 pt Hold the Line, Fins defending.
The Commie hordes swarmed forward, with mortars & a/tank guns moved up just in range of the objective to give covering fire.
The Fins formed a forlorn line of infantry & HMGs stiffened with 2 recycled KVs.
The usual stuff - balk Russian casulatied, but not enough to stop them.
The KVs survived a rain of long range 57mm a/tank fire, but in the end were done for by Commo Pioneers.
The Fin supports were slow to arive & then were delayed further by being pinned by the Commo airforce. They just didn't arrive in time so the remnants of the Commo infantry took the objective.
Posted by Jim Gandy at Saturday, May 13, 2006 1 comment: 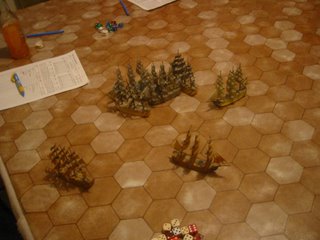 The British had both broadsides double shotted at the start and suffered from long range Frog fire as they closed into close range. But they had a big stroke of luck when the wind changed to give them the weather guage as the fleets closed. This allowed them to pick on Admiral Moy's squadron while Admiral Jendich potted away ineffectually from long range downwind. A couple of close range double shotted rakes from the Rectum hurt Moy's ships bad. La Madonna tried to board the Constipation to fight her way out of trouble. They won the first round but raking broadsides from Rectum & Hernia tipped the scales and La Madonna struck. Soon after Sacre Blu has grappled by Hernia & also struck.

Admiral Jendrich's squadron was still in good shape and while Couchon Noir kept most of the enemy busy Fifi pounded the already weakened Enema. Enema was a mess, but then the Couchon Noir blew up finishing the battle. Fifi made her escape.
Posted by Jim Gandy at Saturday, May 13, 2006 No comments:

The Germans appear to have decided that there wasn't enough time left to break the Allied line before dark, and were content to whittle away at the enemy. The Allies were content to hold the line, keeping their ambushes in hand (where they very effectively intimidated the Germans).

A gain in material for the Germans, but they failed to break the Allied line. The Germans used the Tiger shuffle to great effect picking off Shermans, otherwise most of the damage was done by artillery & mortars. The Luftwaffe showed up twice tonight, once they were intercepted, the other time they tried to bomb their own troops (but were waved off).

That's the end of campaign turn 1.
Campaign turn 2 is the Allied move turn.
Posted by Jim Gandy at Thursday, May 04, 2006 No comments: